Del Ray So-Cal Cantina is, as its name might indicate, a Southern California-style bar with Mexican influences. The Queen West spot recently took over the space that once played host to Social Bar Cafe and Desserts (and Chococrepe not long before that). 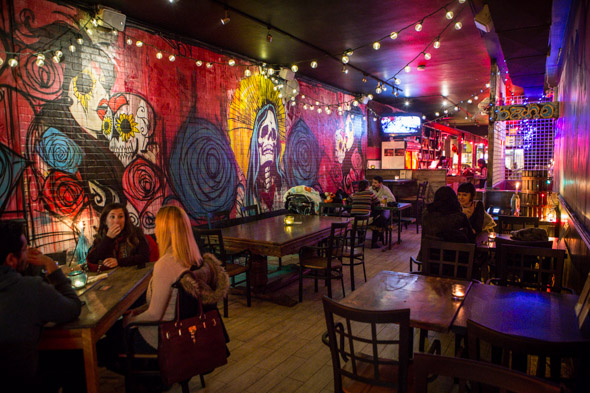 Inspired by the time new owner Joe Kelly spent in the '90s taking weekend trips to party in Tijuana while studying music production in L.A., the completely overhauled look of the place - with the help of Frank Ripley of Ask Frank Designs and distinctive artwork by Stu Dead of Playdead Cult - has a laid-back party vibe, with a cabana-style roof over the hand-built wooden bar and calavera/Dia de los Muertos-inspired images all over the walls. 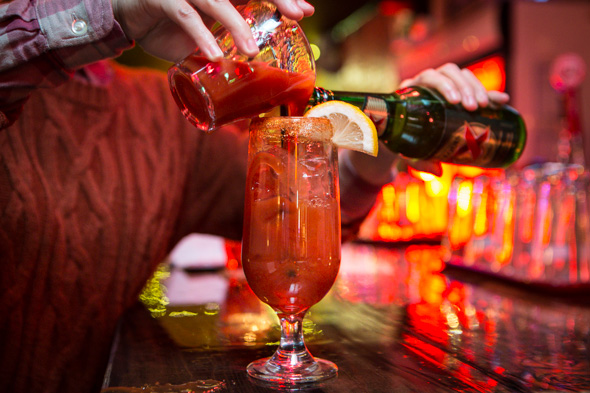 Beers on tap are all Mill Street brews, while cans and bottles include Mexican beers like Tecate, Dos Equis and Corona as well as popular Canadian crafts like Blanche de Chambly and Beau's. For a true south of the (U.S.) border drink, there's the Michelada ($11), which is sort of like a Mexican Bloody Mary or Caesar, made by mixing Dos Equis beer, hot sauce, house-made spices, tomato juice (or Clamato), lime and salt. 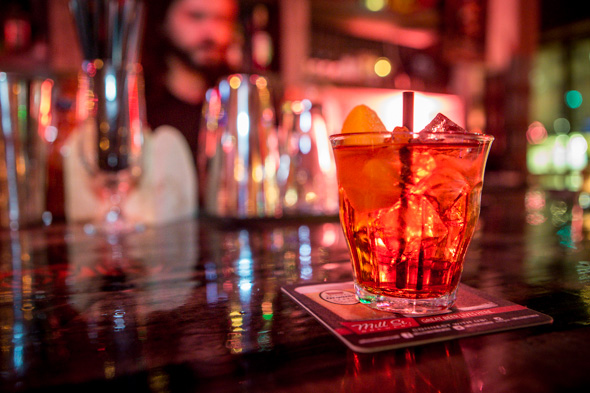 Other cocktails are spins on classics; the Delgroni ($12) is an interesting play on the Negroni, replacing gin with tequila blanco.

Chef Ryan Oliver ( WVRST , Disgraceland , Edward Levesque's Kitchen ) has created a simple menu of bar snacks using fresh ingredients. Everything - even the hot sauce and ketchup - is made in-house (the ketchup is amazing; my dining companion wanted to buy a bottle from Oliver), except the tortillas, which come from La Tortilleria . Almost every item is priced at $7 with the exception of the Nachos Grande ($13), and meat add-ons (pork or chicken) clock in at $3-4. 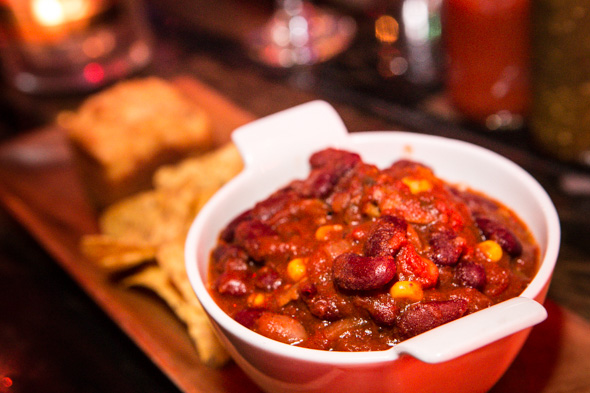 The Long Board Chili is a vegan chili served with tortilla chips and cornbread. It's hearty, makes a great dip with the chips, and doesn't lose any flavour with the meat. Oliver tells me that everything on the menu is vegetarian, with the option to add chicken or pork; he once spent a year as a vegan and then as a vegetarian, so he's well-versed in cooking with veggies. 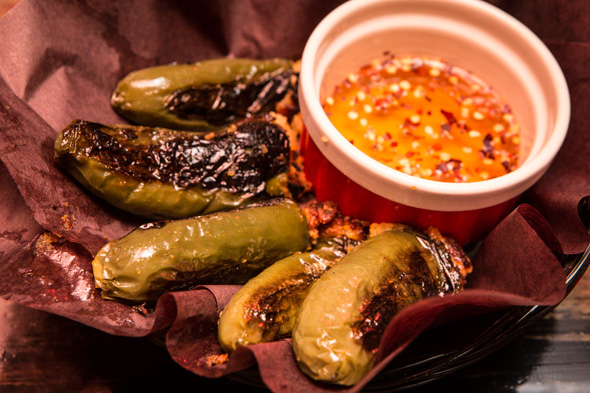 Fans of chance and spicy foods should gravitate towards a dish called Sweet Hand of the Devil, an original Oliver creation consisting of five jalapeno peppers stuffed with cornbread (he is a big fan of stuffing stuff, as proven when we come back for brunch). It's a Russian roulette of eating; some of the peppers lure you in with their tasty mildness while others are eye-wateringly spicy and set your mouth on fire. It can become an addictive game to play. An accompanying agave-syrup-and-chili-flake dip offsets some of the spice with a touch of sweetness. 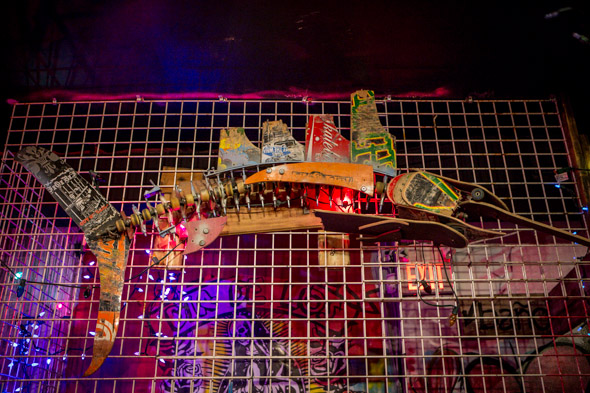 We return a few days later to try the new brunch menu, which is small in size but creative in scope. To start, there's French press coffee ($4) served in adorable Japanese cups that Oliver insisted on having. 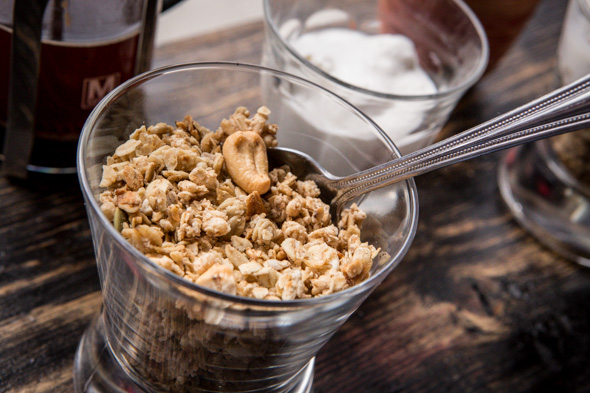 The cereal of the day ($5 as a starter, $10 as a main) is organic ginger and hemp granola with cashews served with a mango-infused coconut milk, which is so thick it's almost like yogurt. The coconut milk has real chunks of mango in it and is a flavourful, not-too-sweet complement to the cereal. 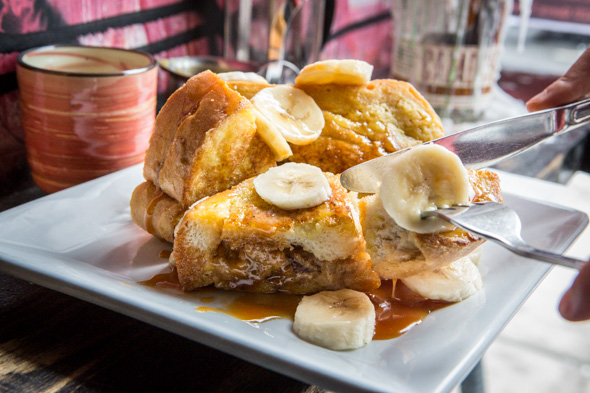 Like the cereal, the filling in the Sweet Spot Toast ($14) will change up every weekend, depending on market availability and the whim of the kitchen. When we're there, the French toast is stuffed with peanut butter and bacon, and topped with slices of banana; the weekend prior, it was blueberries and cream cheese. Instead of maple syrup, there's a caramel and coconut milk sauce to pour over the toast, making for a nice mix of sweet and savoury. 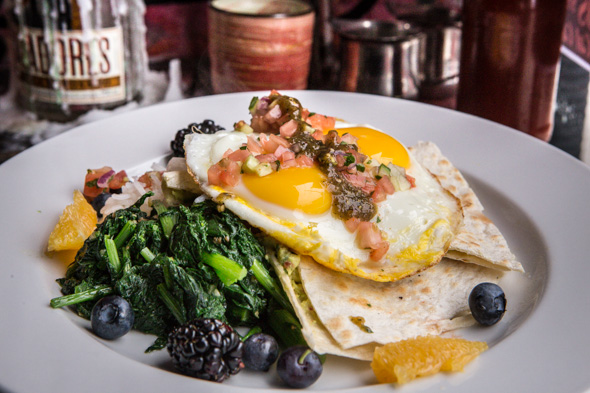 Huevos rancheros ($14) come with two eggs, guacamole-stuffed tortillas, rapini and purple kale (house lamb sausage or bacon are other options instead of the wilted greens), as well as garlic fried rice inspired by a Filipino breakfast dish a friend of Oliver's once made for him. It's definitely not your typical huevos rancheros. 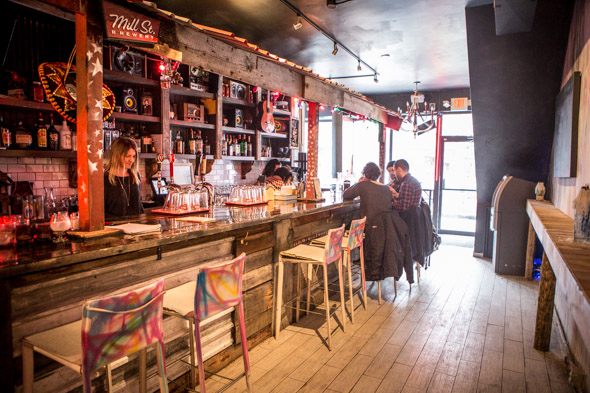 Food aside, I'd be interested in returning to check out one of the occasional live music nights here, where bands set up in the back. Del Ray seems like a fun spot to hang and bask in the chill So-Cal vibes when it's actually the dead of winter outside. 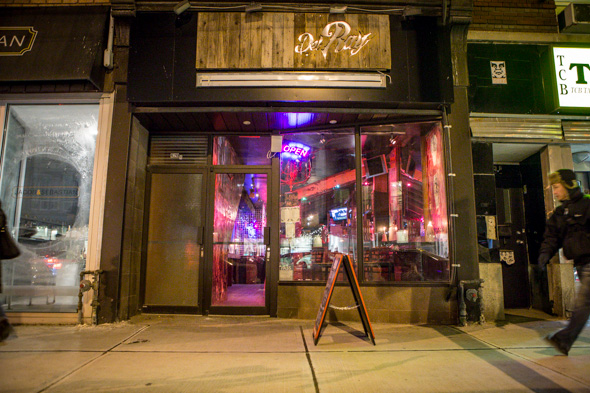