The Davenport was formerly Bob Coffee Bar, and still serves takeout coffee until 3 p.m., but has transformed into a cozy pub serving smash burgers, BBQ plates and bourbon cocktails.

Named for the street it’s situated on, the restaurant is run by the same folks behind next-door spot Annabelle and Frankie’s in Leslieville. 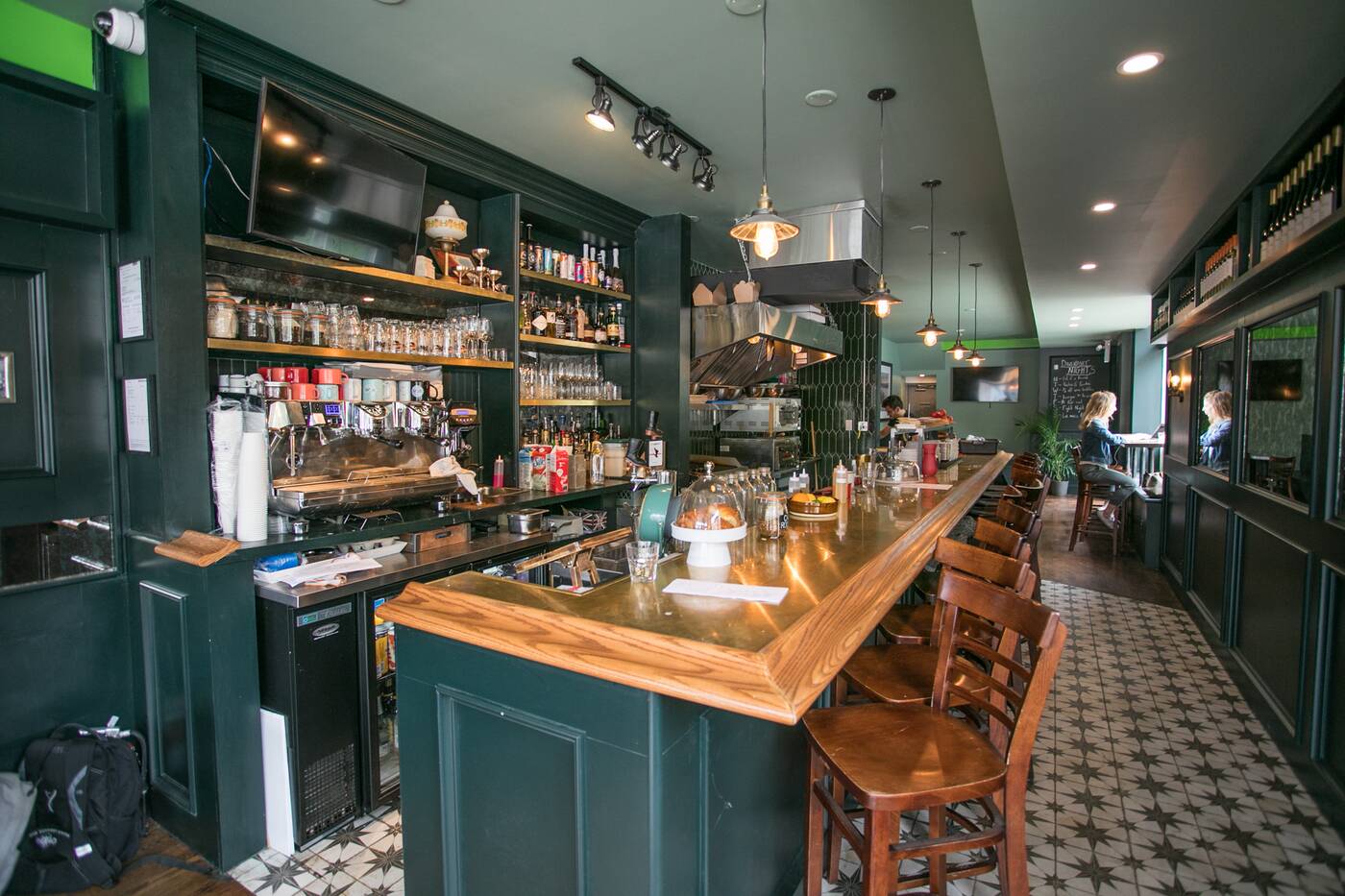 Though still open all day, the 50-seat park-facing space has been given a mature, evening feel with a new deep emerald coat of paint, a steamy open kitchen taking centre stage. 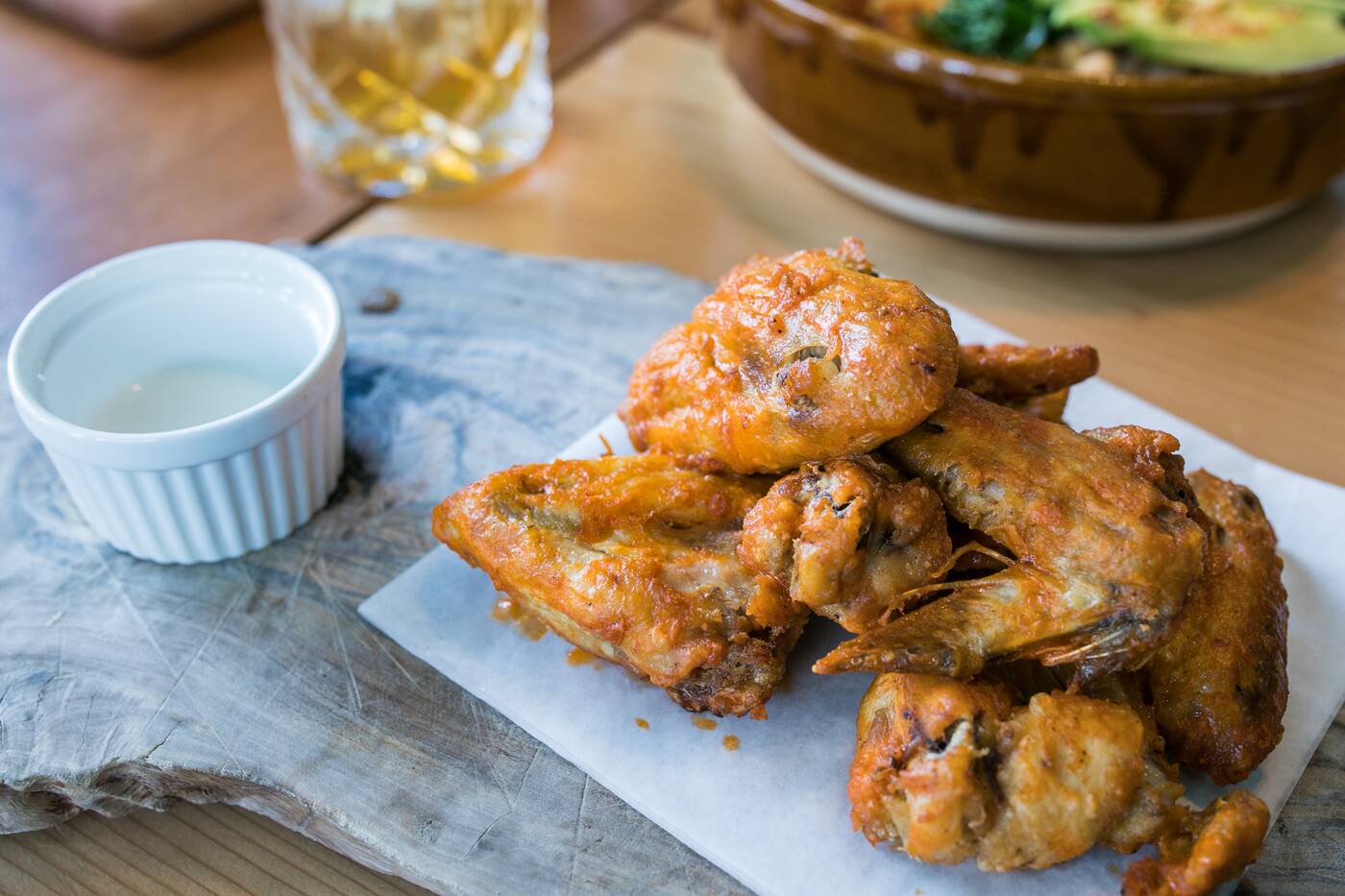 Confit chicken wings ($12) are somewhat obviously not fried but cooked in their own fat, tossed in your choice of BBQ, honey garlic rosemary or iconic butter hot sauce and served with a thin blue cheese dipping sauce. 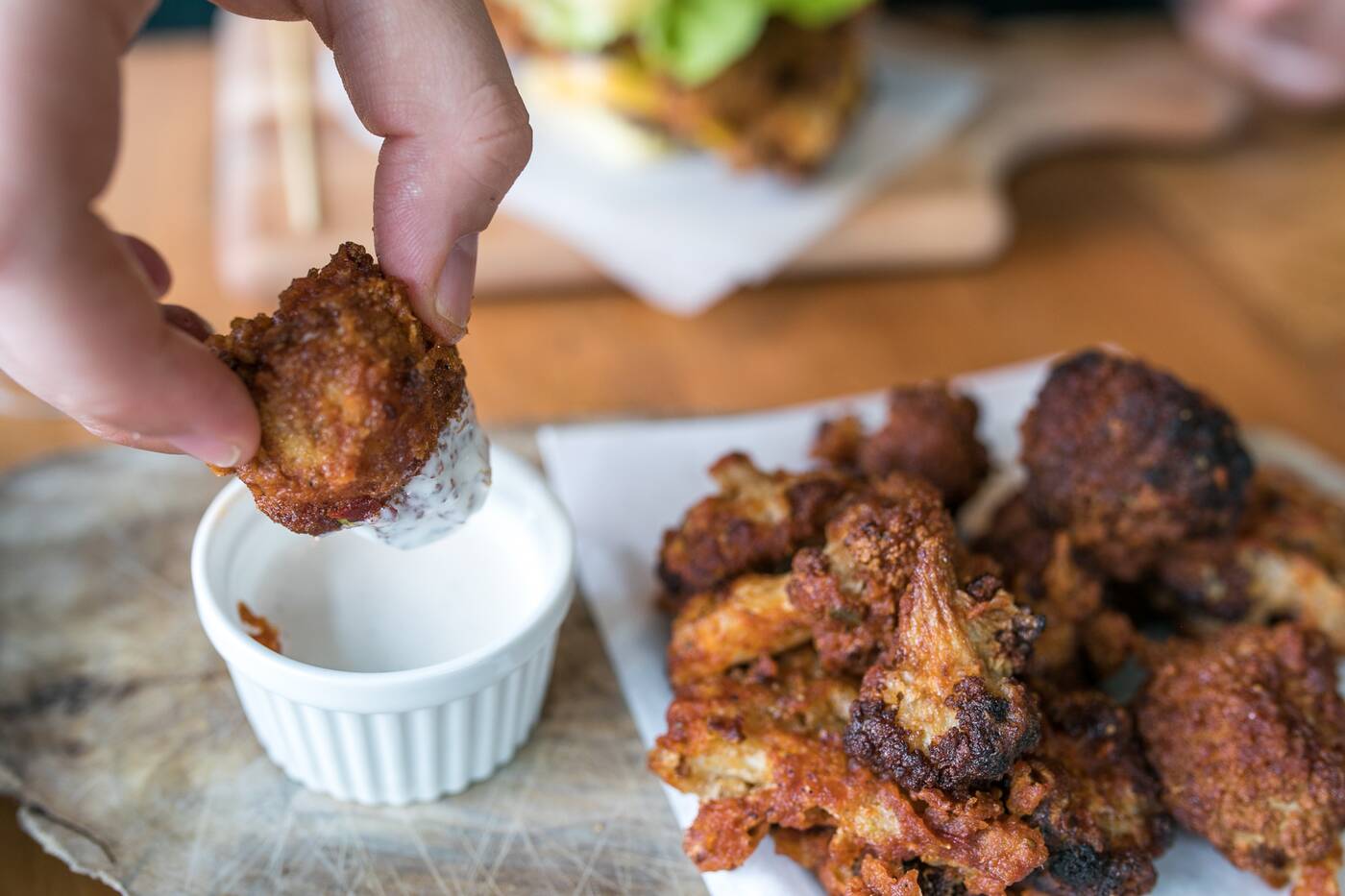 They can also not-so-secretly be vegentarianized by being made with spongy cauliflower that soaks up BBQ sauce well; it’s possible to make many items vegetarian in some way. 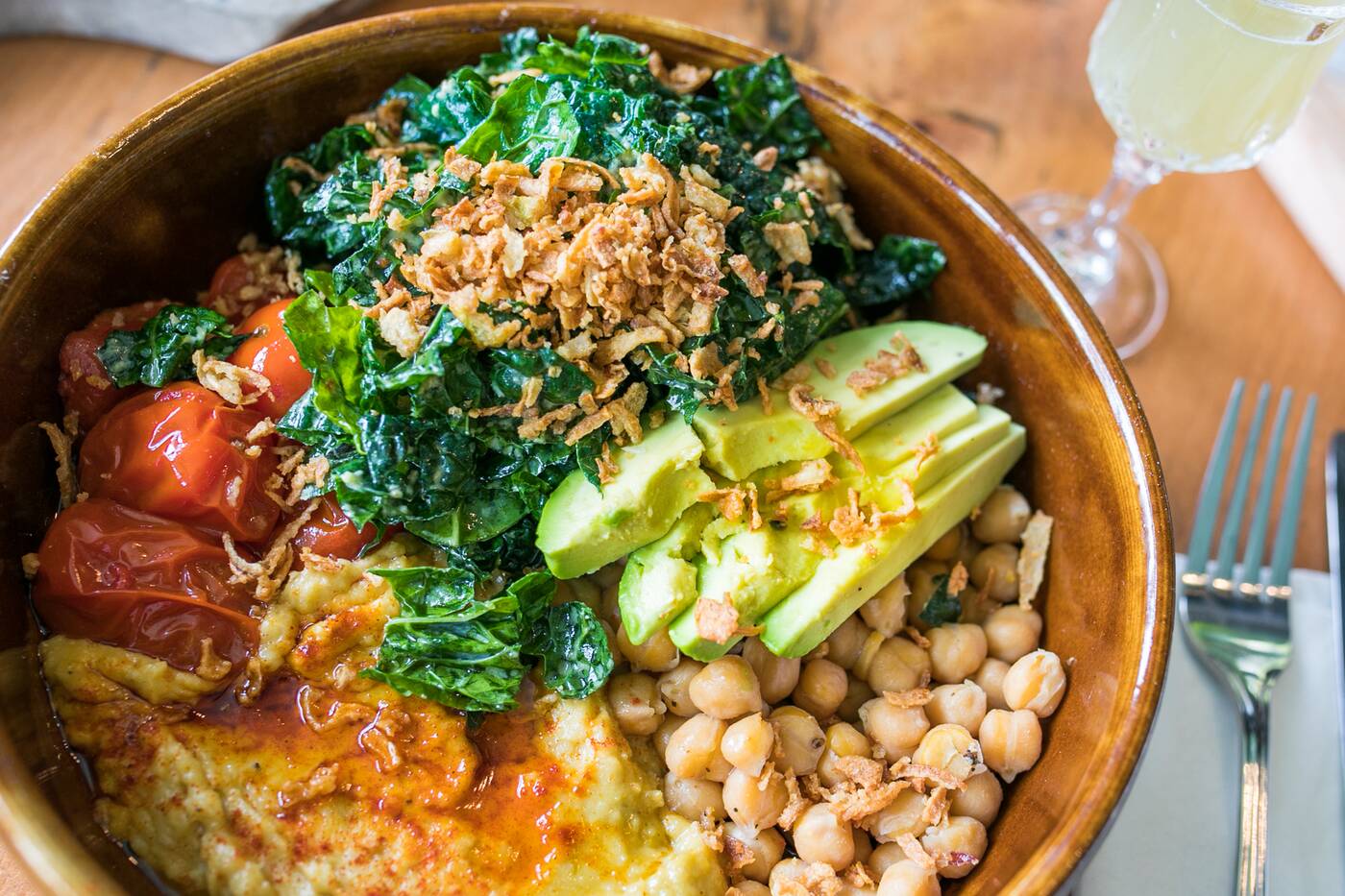 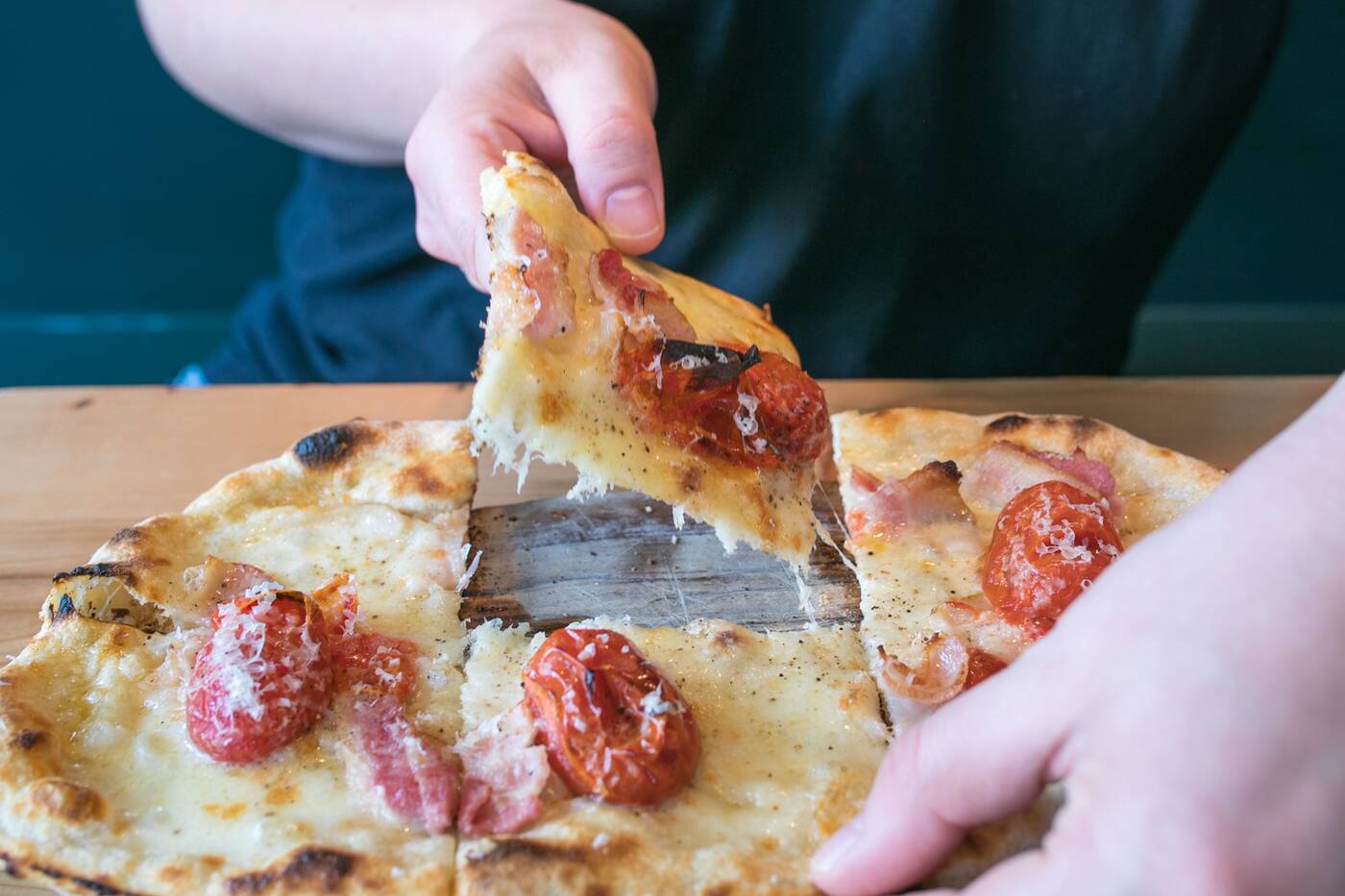 Roast tomato, smoky bacon and fior ($13) is one of about half a dozen options for flat breads made using the scratch dough produced for dishes at Annabelle, but stretched a little differently.

Airy yet crackery, these particular toppings create a harmony of sweet, smoky and creamy without being too cluttered. 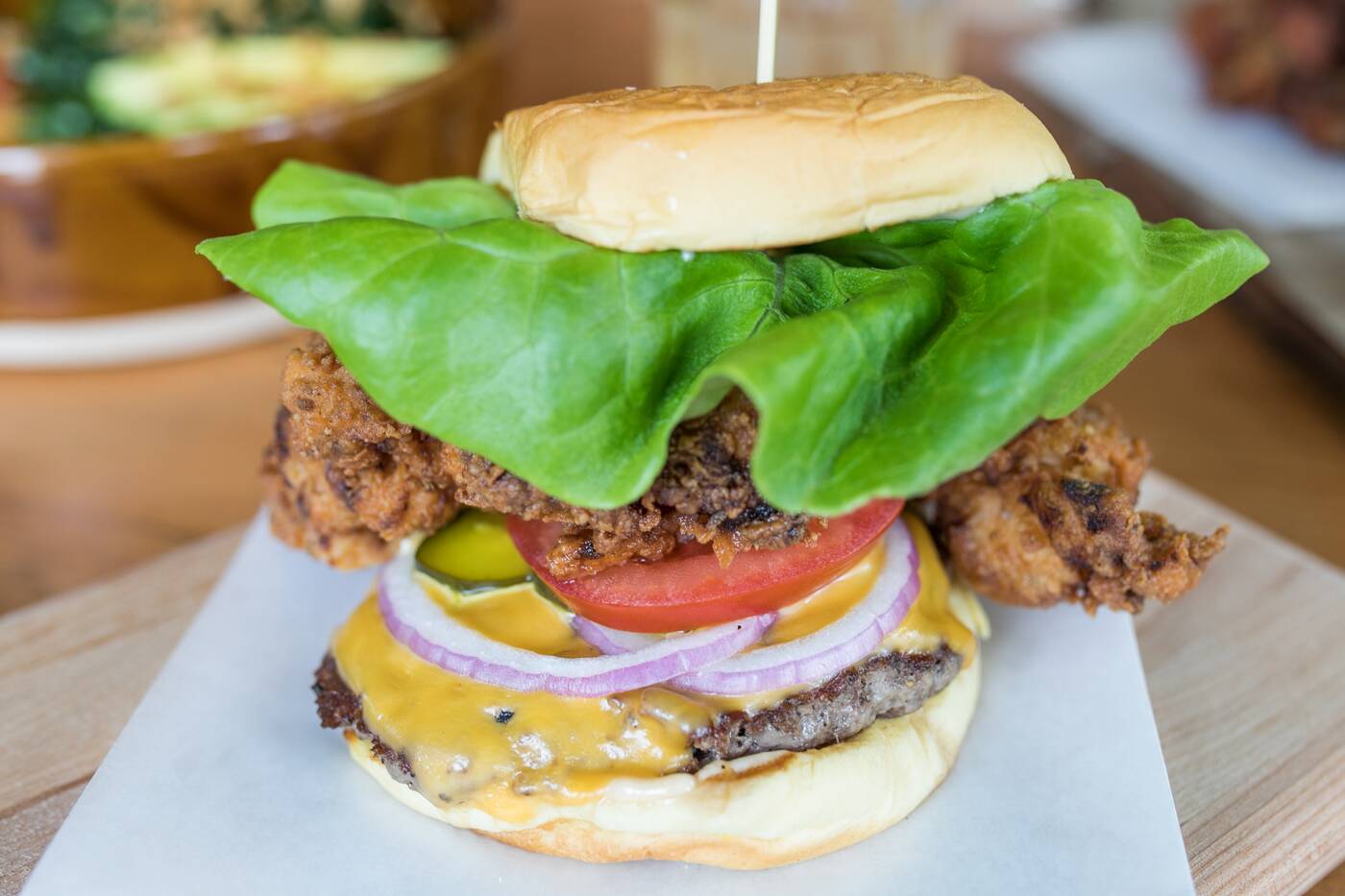 The “Bang Bang” burger ($16) is a signature, bringing together a chuck short rib smash cheeseburger and fried chicken made using smashed thighs marinated in buttermilk overnight.

All on a soft, squishy Martin’s potato roll with secret sauce, lettuce, tomato and onion, the two go surprisingly well together but also seem like they’re juicy and flavourful on their own. 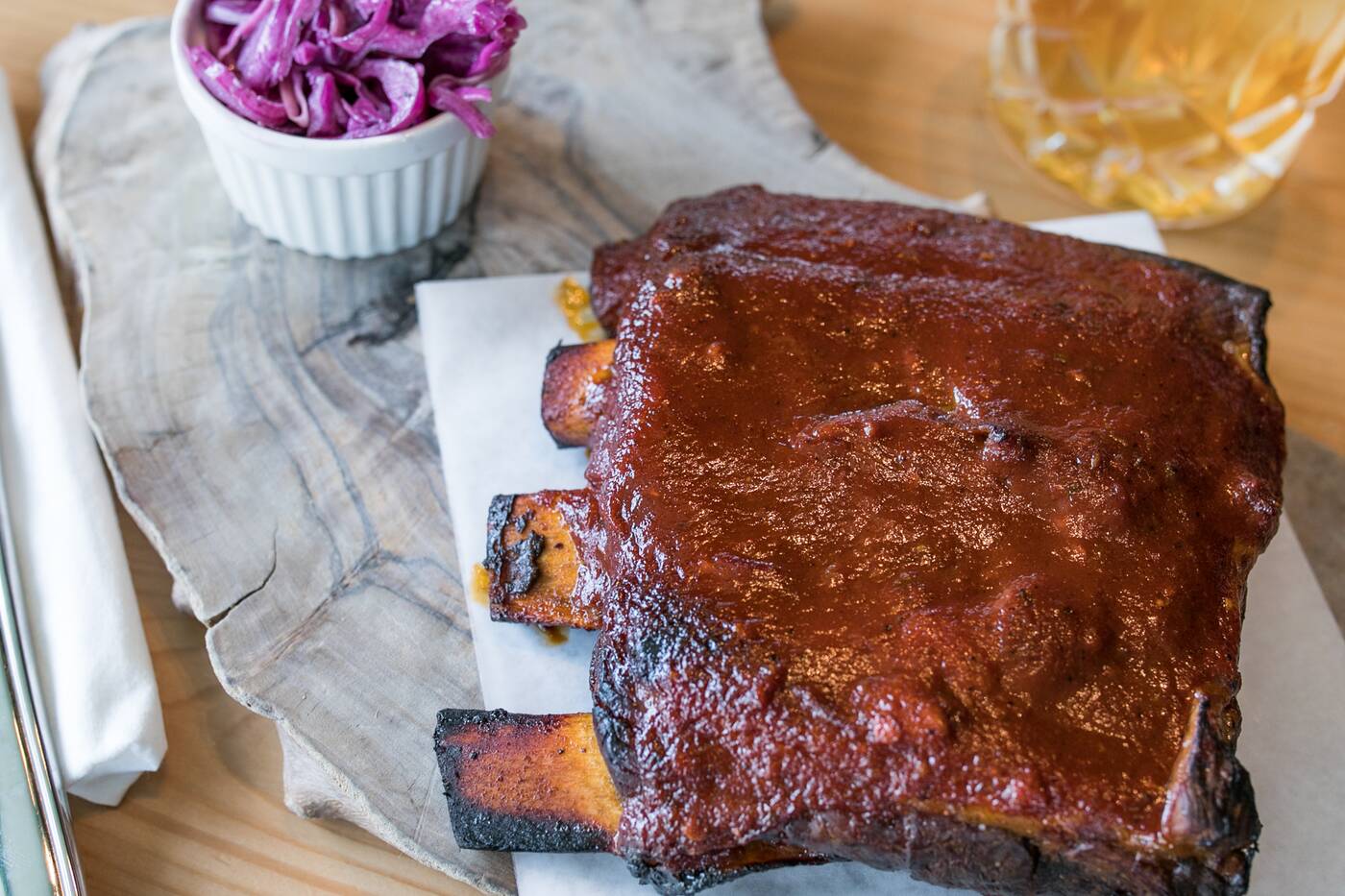 To say Kansas City ribs ($18) fall off the bone is an understatement; bones slide out effortlessly from meat that’s been sous vide and caramelized in the oven, then topped with a generous amount of thick, smoky, slightly sweet house BBQ sauce. A crunchy, creamy red cabbage slaw accompanies. 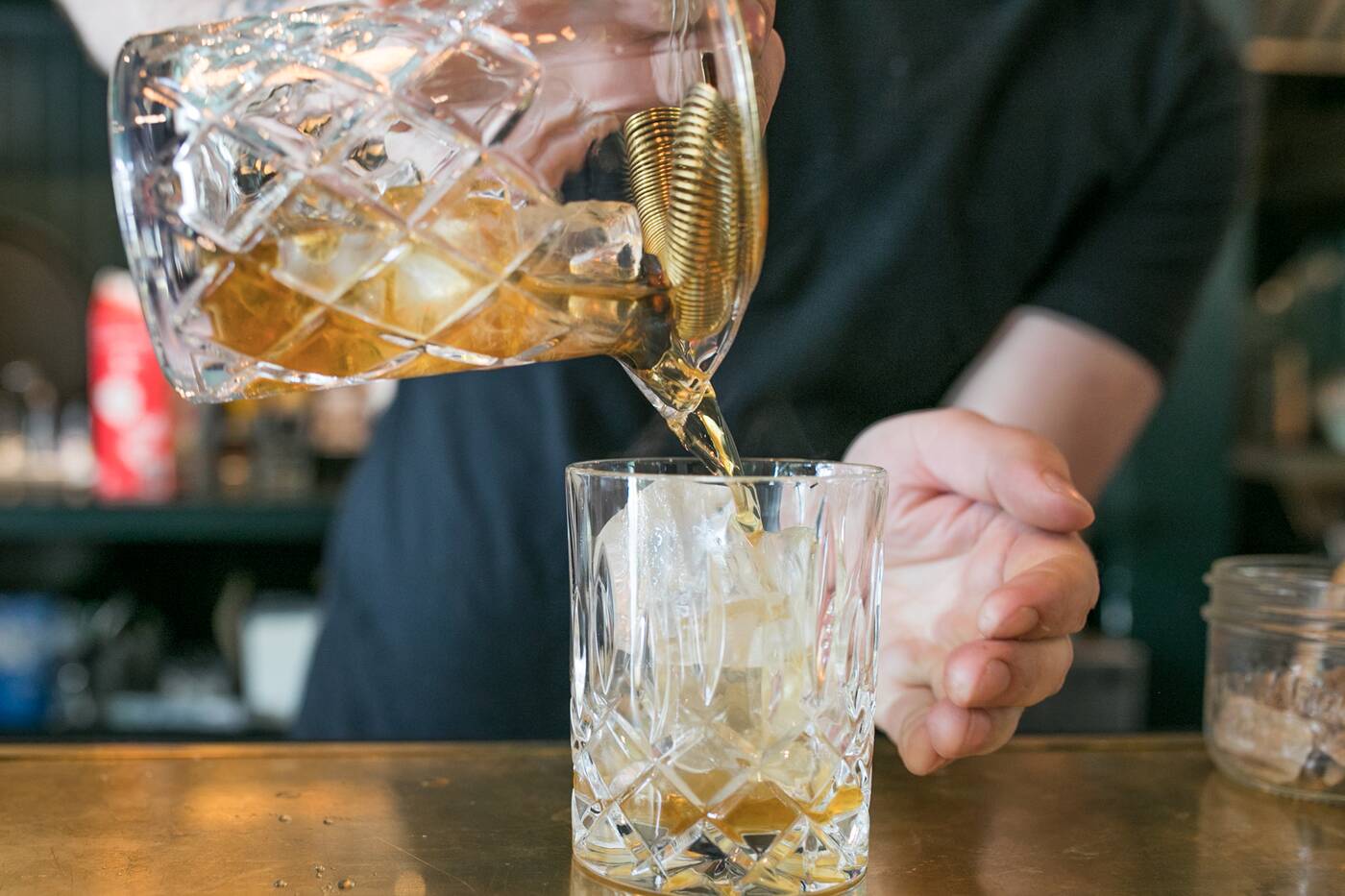 The Davenport Classic ($13) is the signature bourbon cocktail here, more impressive than it has to be with vanilla-infused Four Roses Single Barrel, vanilla gomme syrup for consistency, Dillon’s ginger bitters and a hickory chip that’s actually set ablaze and shaken with the other ingredients to impart a bit of smoke flavour. 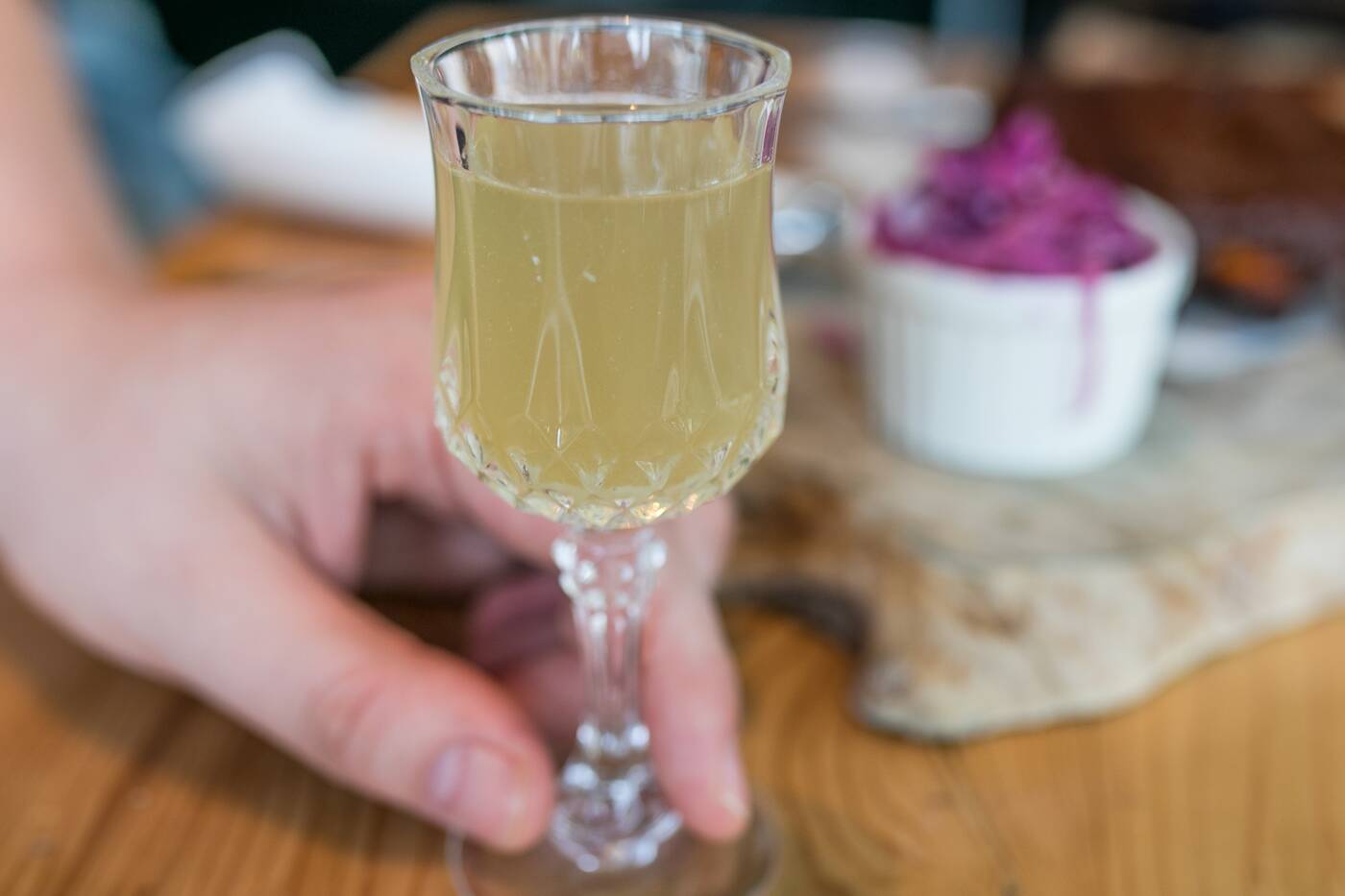 A Nori Bomb ($8) is an unusually-subtle shooter of nori-infused Dillon’s Unfiltered Gin #22, wasabi and rice-vinegar syrup. 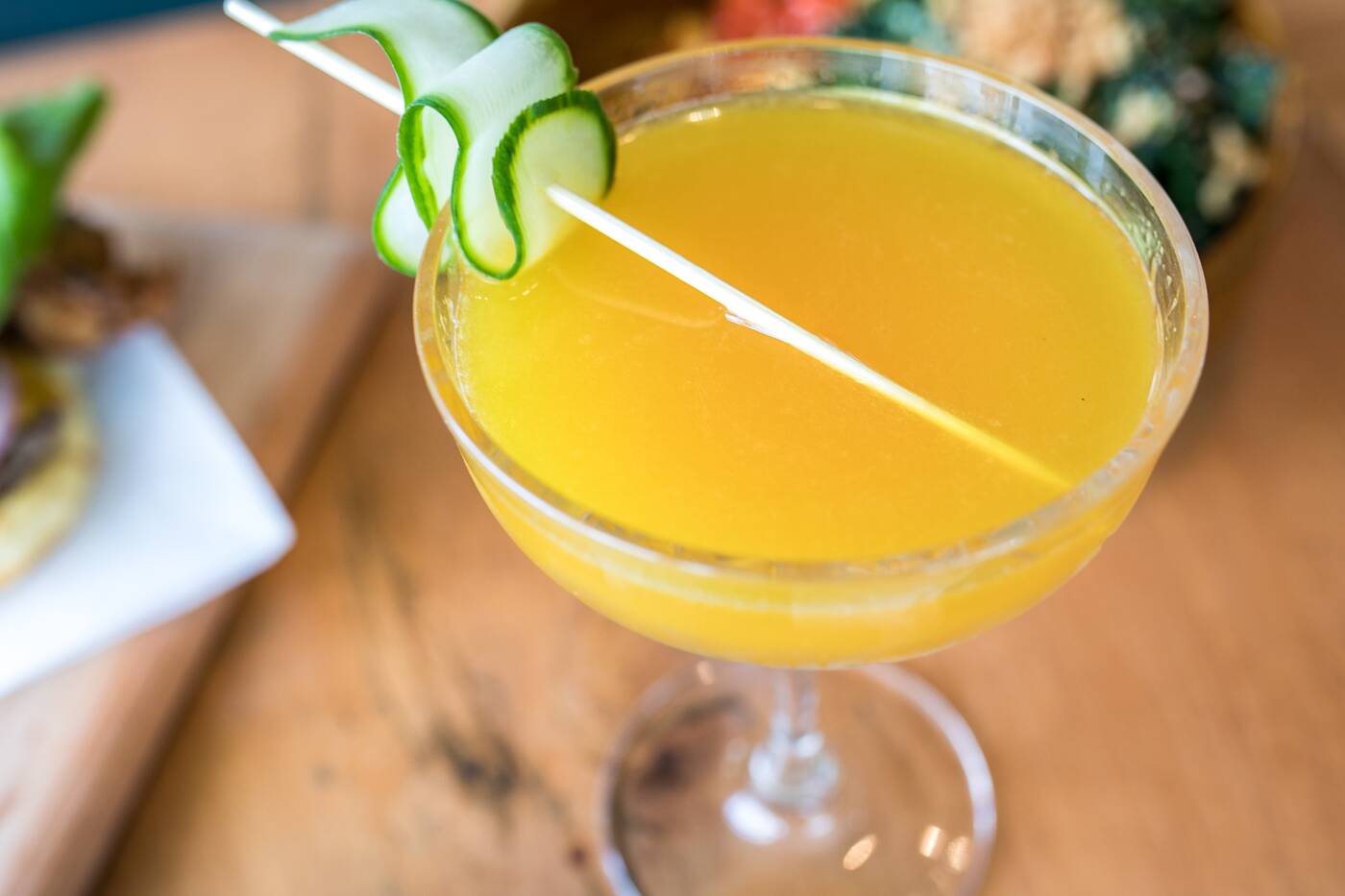 The Jaundice Joplin ($13) infuses the Dillon’s #22 with saffron and adds cantaloupe puree, lemon juice and simple syrup for a juicy parkside bevvy. 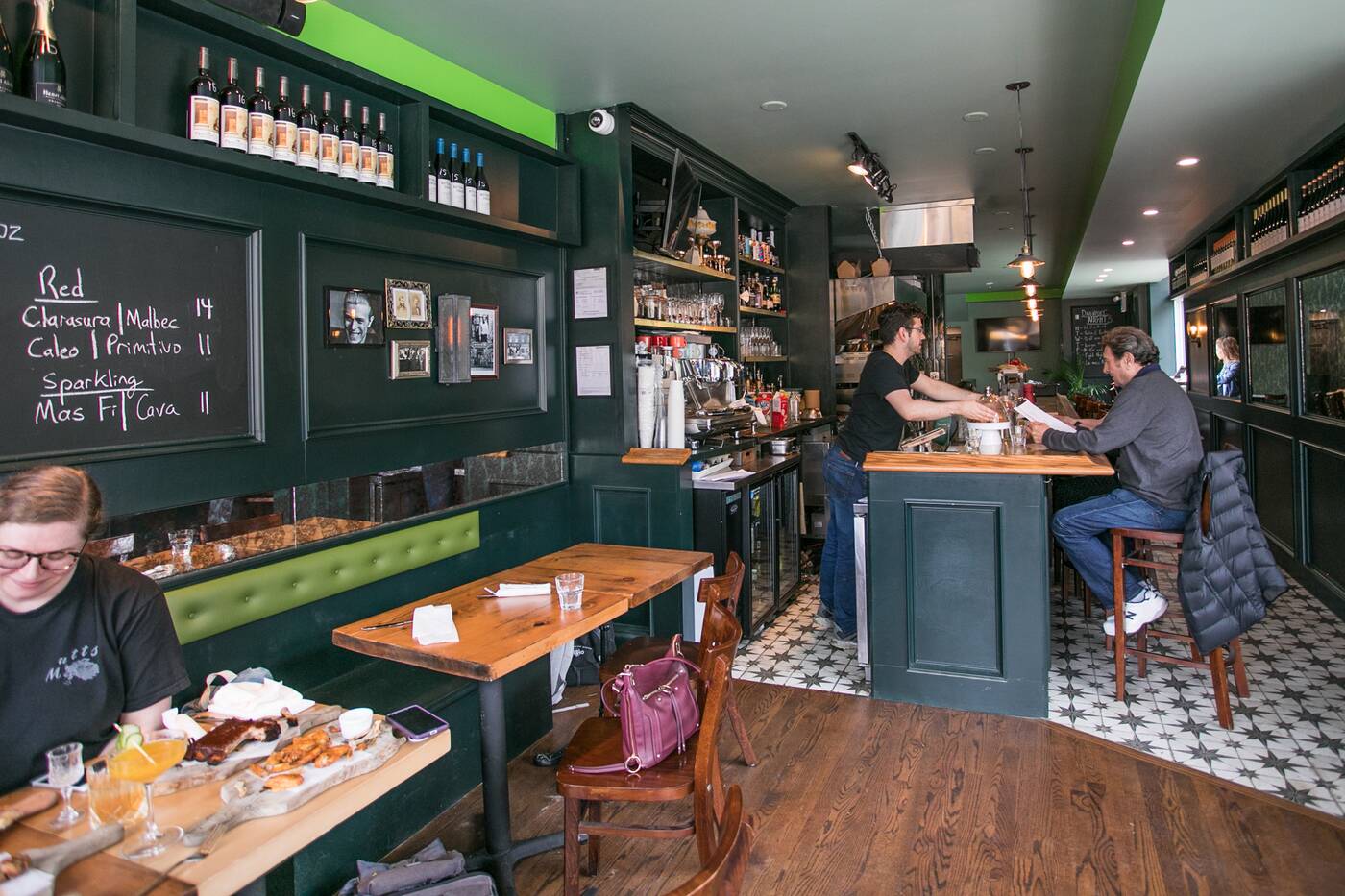 Coffee starts early, food goes from noon til late and there are daily specials. 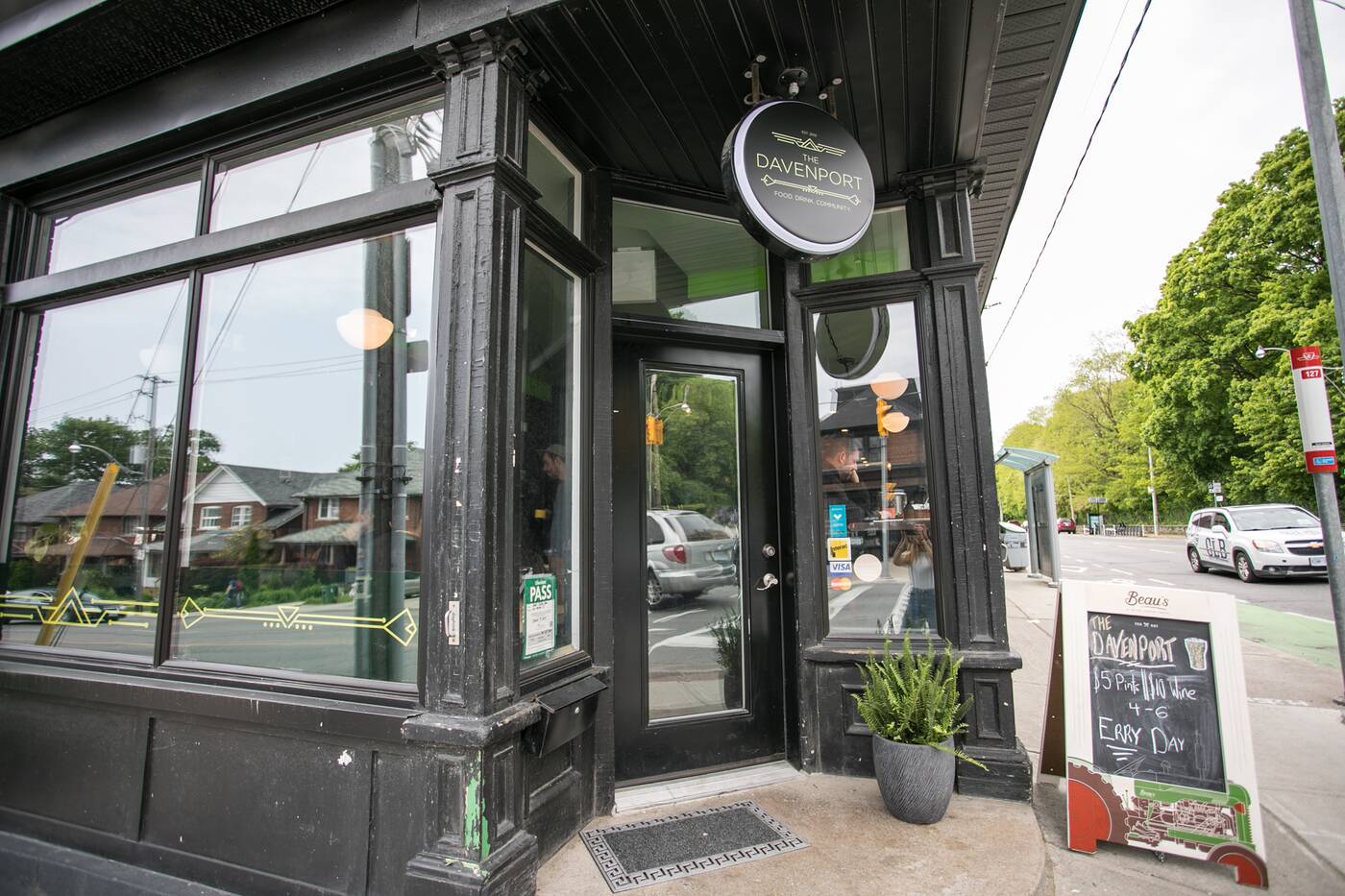