Find yerself at the corner of Queen & Broadview much? Maybe you just stumbled out of Jilly's and into chilly, river-scented street blinking daylight with a rumble in yer gut and a crumpled double sawbuck in yer hand. So you're peckish, huh? Maybe carnivorous? How about a burger? 'Cross the road: the Double 'D'...four doors down: The Burger Shoppe...which d'ya choose?

The burgers purveyed by these two upstanding beacons of this community-in-transition trace an elliptical orbit twixt dangerous, pocket-mumbling, urine-stained, toothless grinning, downtrodden shabby-chic-that-you-never-wanna-stand-downwind-of past; and the nouveau riche, gleaming starbucksed future face of the newly trendy south-east end. Well if gentrification equals evolution then for the riverside burger consider this screed its Scopes Monkey Trial .

Open mere weeks and playing Spencer Tracy in this culinary tete a tete, The Burger Shoppe like its locale is getting much buzz lately, in this case inheriting a lotta digital wind through various foodie message boards. It's a trendy little earth-toned faux-70s space blaring Jamiroquai and crammed into the tight shell of an old barber shop with little in the way of extra room for the staff of 4 to maneuver behind the counter. The service is brusque and at times the staff seems to be under each others' feet rather than working as a well oiled machine; surprising considering how ponderously slow the food arrives during lulls in the take-out traffic. So much for fast food . 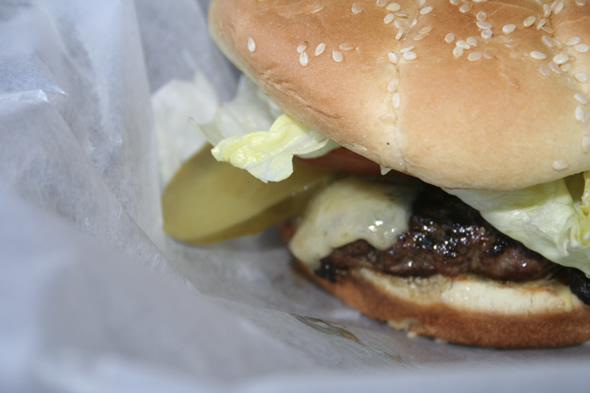 Their schtick is freshness and despite obviously flawed choreography, the grill still manages to churn out a surprisingly decent burger. The 'Organic' packed with fresh-not-frozen Healthy Butcher beef ($7.45) finally arrives slightly pink and perfectly juicy at that. Nestled in a crusty bun that doesn't overwhelm the patty, the burger is topped with a scant slice of aged cheddar and a meager line up of the usual toppings suspects including iceberg lettuce, onion, pickle and a squeeze each of mustard ketchup and mayo. Luckily the lack of competiting flavours makes the beef stand out and its a taste that definitely merits the price tag.

The poutine is another story. Fantastic fries, twice cooked juilienne jobs--think Swiss Chalet's skinny sister--are standouts and probably tasty enough solo but are overpowered and undermined by excessively salty feeble beef gravy and forget about eking a squeak outta the sorry cheese curds on top, it just ain't gonna happen. Save your $4.95 and order the excellent extra-chubby golden onion rings instead. 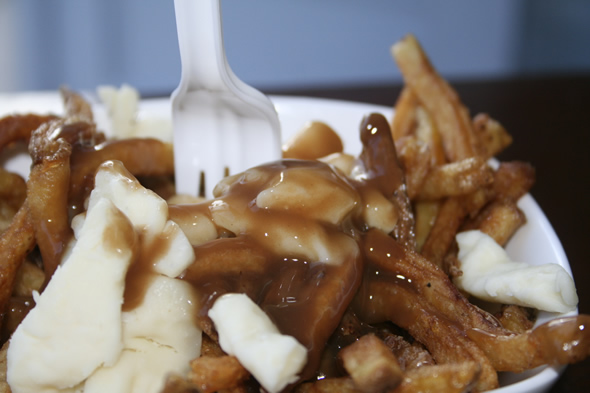 Washing down this meal comes with a heavy price tag too: the Burger Shoppe Shake'll give you the shakes when you fork over $5.25 for a double scoop of Ed's real scoop organic ice cream (nah, there's no burbon in this shake ) that although accompanied by the steel cup it's blended in, may actually have half a scoop left in the bottom and good luck trying to suck that up with a straw.

The price tag for the burger/poutine/shake combo comes out to a staggering $20.12. 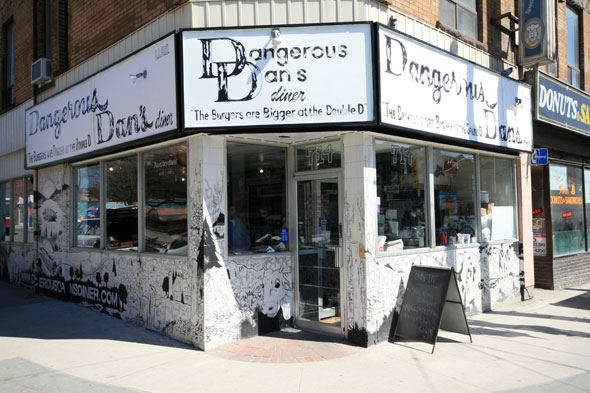 A riverside stalwart and home for the wayward punks on pit stops heading for shows at the opera house, there's nothing subtle about this greasiest of oldschool greasy spoons. Decorated with a dominant Holstein motif and seating poached from mini van interiors if refined's what you're looking for, move along Jackson. Dangerous Dan's aint it. And that lack of refinement extends to the food as well so bring yer appetite.

Ponying up $22.99'll getcha the infamous Quadruple 'C' or "Colossal Colin-Clogger Combo' which even for the most ambitious or emaciated of eaters is an exercise in pure gluttonous, mouth-stretching excess and includes:

* A small poutine (which, in any other restaurant would be a large) 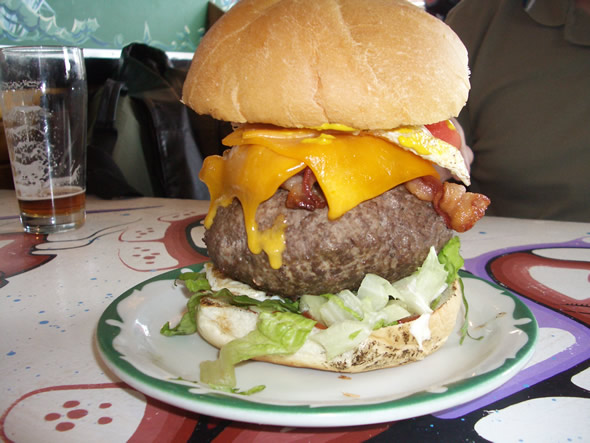 Plug in the defibrillator and prepare to marvel at the way the kitchen manages to get a burger of such obscenely mamoth proportions cooked to a consistent grey all the way through and still manage to keep it relatively juicy all in under 10 minutes. And while a "Quadruple 'C'"may be about quantity, the intense beefiness is highlighted by a pleasant proprietary spice mixture sure to keep diners entertained for the half hour or so it takes to down one of these behemoths. Anything less than 'the works' on this burger would be an insult-- in fact, you'll be wondering if the Double 'D' is actually a sly reference to your bra size after the meal, me boyo. 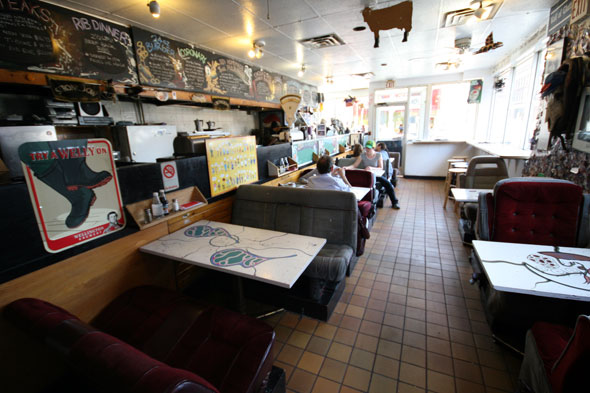 The gravy lacing the albeit mccain extra thick fries comprising the poutine is beefy alright; rich and brown and flecked with actual groud beef, it's enhanced with a hit of vinegar which plays well with the perfectly squeaky cheese curds.

Hopefully you'll have enough breath left over to suck back the venti-sized classic shake that is perfectly blended and despite the obvious absence of any gastric space'll definitely be worth the pain of finishing every last heart-attack-inducing drop.

Hardly a fair fight, none other than BlogTO's very own Tanja-T. said of the pitch for this review: "it's like pitting Hulk Hogan against Bill Nye" and she's right. Both burgers are excellent in very different ways. The Burger Shoppe's 'Organic' is, for all the attending hype, a great tasting burger and worthy of a trip on the 504 until management gets the kinks worked out and franchises the heck outta this concept. For pure quantity, it's hard to go wrong at Dangerous Dan's. Undoubtedly filling, the surprise is that the burger is hella tasty too. Either way, locals both old and new are spoiled for choice when it comes to burgers on the lower east side. 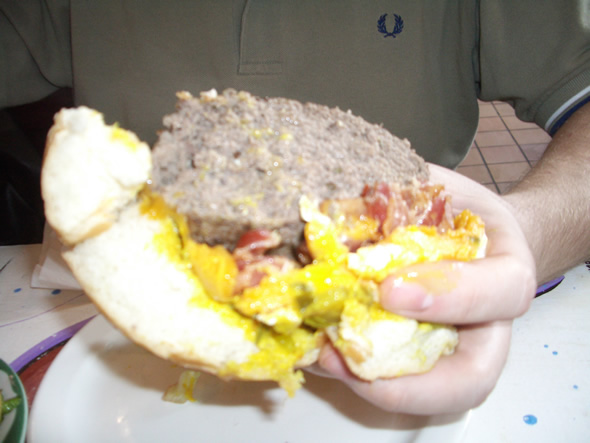