The latest addition to the West Queen West restaurant scene is Coca, a Spanish tapas and wine bar that has done absolute wonders with the space once inhabited by Gabby's (Queen and Euclid).

I stopped in with a friend before heading to work last night, so I had to pass on the wine list, but not the daring selection of tapas, olives, cocas (Spanish pizza), salads and entrees. 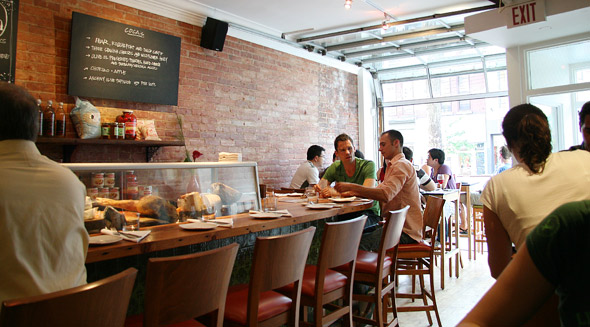 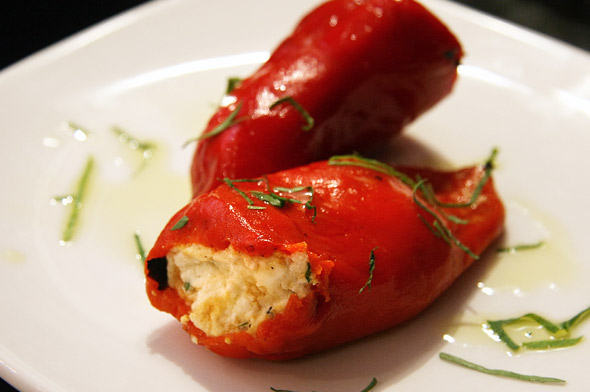 I warn my friend, a cheese-novice, that pecorino is a pretty 'lively' cheese, but she shrugs, takes a bite of the pequilos peppers and falls and love. Sweet mini red peppers compliment the pecorino well.

The potatoes (pictured at the top) arrive next and are also a brilliant mix of flavours. They're paired up with roasted red peppers, artisinal pimenton leaves and a touch of olive oil, the peppers being the real dressing here as their flavour infuses the whole dish. The baby pimenton leaves, I should mention, not only give the salad that old country flavour but are very edible... so don't cast them aside! 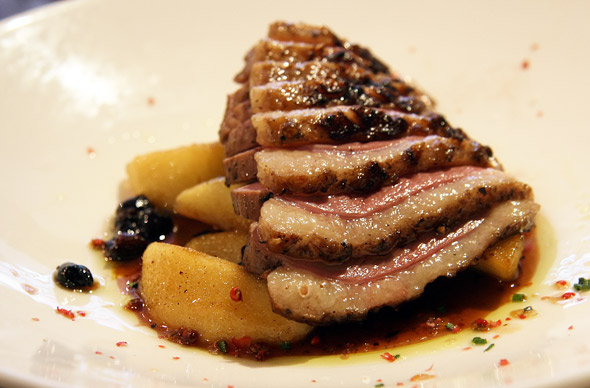 And finally, the sous vide duck arrives looking artful as it's sliced in perfect scallops and carefully laid on a bed of sweet sauteed apples. I'm not usually a big fan of duck, but this dish is really, really nice. I smothered each piece of duck with the "licorice dusted" Morrocan olives and, without exaggeration, I think I heard my tastebuds singing. Kudos to Coca's chef for bringing an unusual trio of ingredients together in such harmony.

While having only sampled a few dishes (and ogled many others) it became clear that every offering on this menu is just packed with strong, complex, flavours. If you want something simple on the side, you'll have to order the flatbreads. 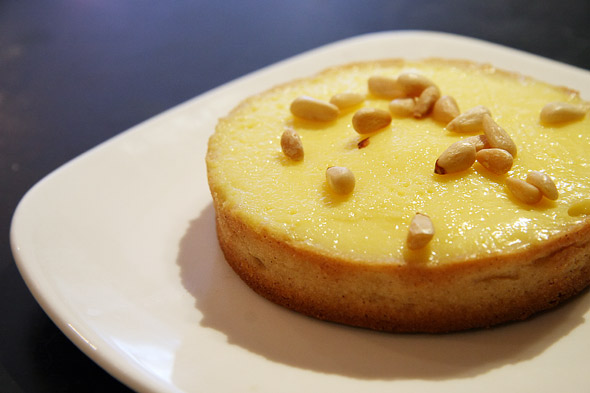 Before heading out we inquired about desserts and were presented with a list of daily options. We chose a citrus tart with pine nuts ($8) looking for something fresh to cleanse the palette. This is perhaps the only pick that missed the bullseye for me. It took a long while to arrive and was a little too cold for my taste. That strong citrus flavour was there but the hard, crumbly tart and flan(ny) texture just distracted from the clean flavour you'd expect from a citrus dessert. I wound up picking up a coffee up the street to cut out the tart flavour that wouldn't budge.