Casa Fuego translates as 'house fire' in Spanish. This subterranean South American steakhouse and Nikkei bar in the Entertainment District is from the same team behind Brazilian restaurant Copacabana, which can be found above it (Copa also has a location at Yonge and Eglinton). 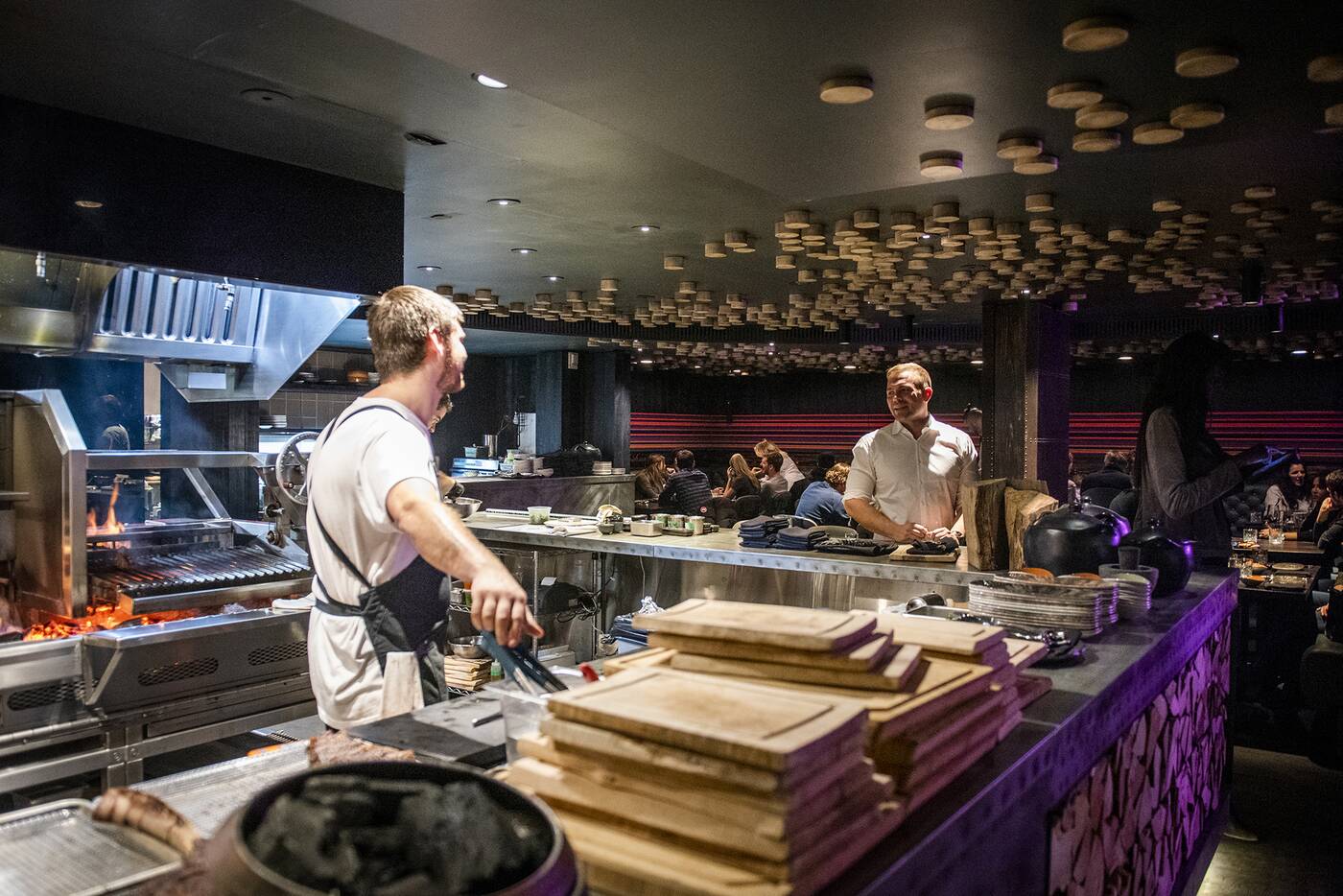 Formerly AYCE seafood concept Copa by Sea, this sleek, 60-seat space has been warmed up in various ways; a lit-up neon 'caliente' (Spanish for 'hot') sign beckons patrons to snap a pic for the 'gram, while an eye-catching wood-fired grill takes centre stage with chef Gastao Rodrigues at the helm. 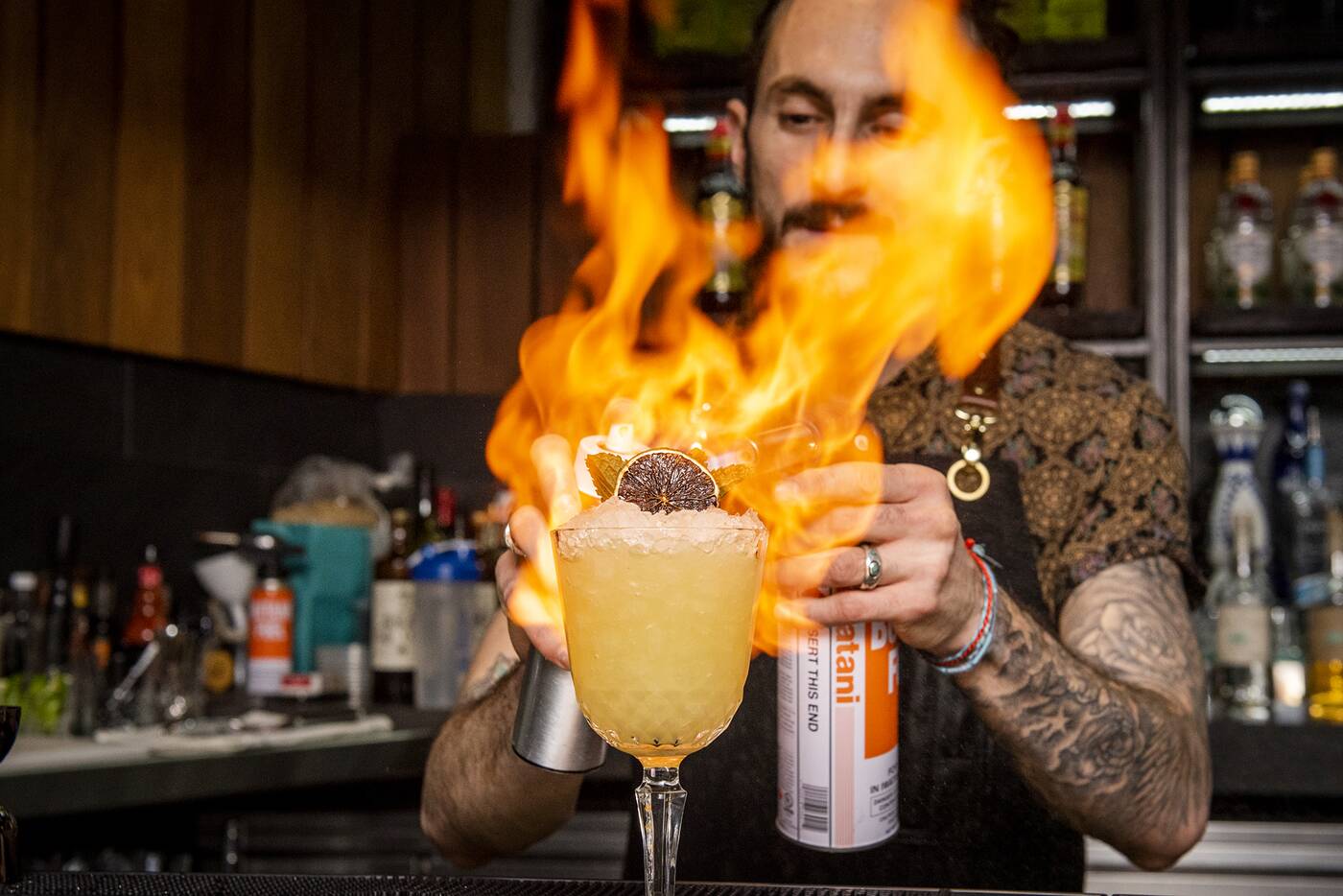 Cocktails from the bar keep on theme, with a flair for the dramatic; the Buena Onda ($14), Spanish for 'good vibes'—a shaken mix of Plantation pineapple rum and five-spice pineapple cordial with a garnish of lime and mint—is literally lit on fire. 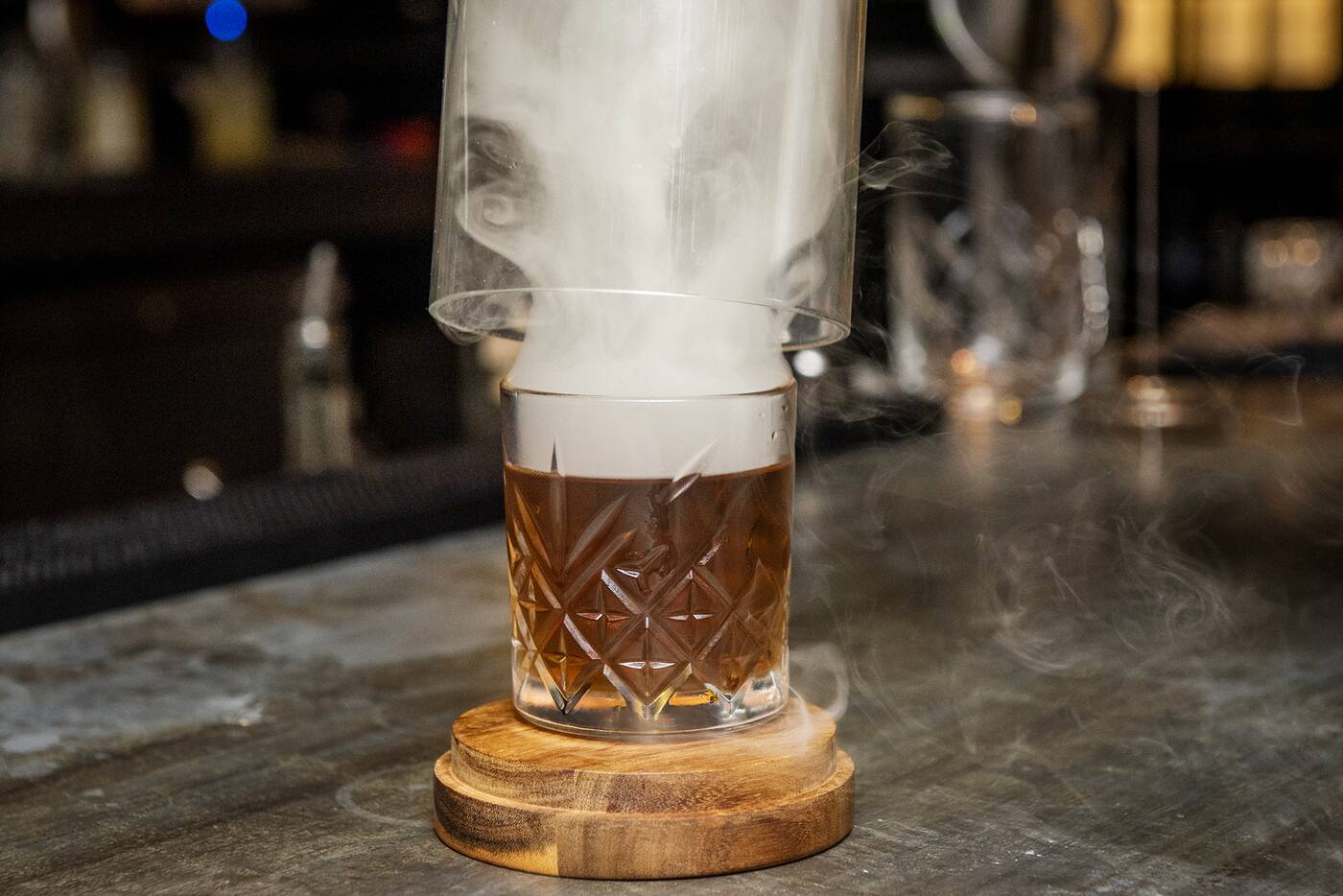 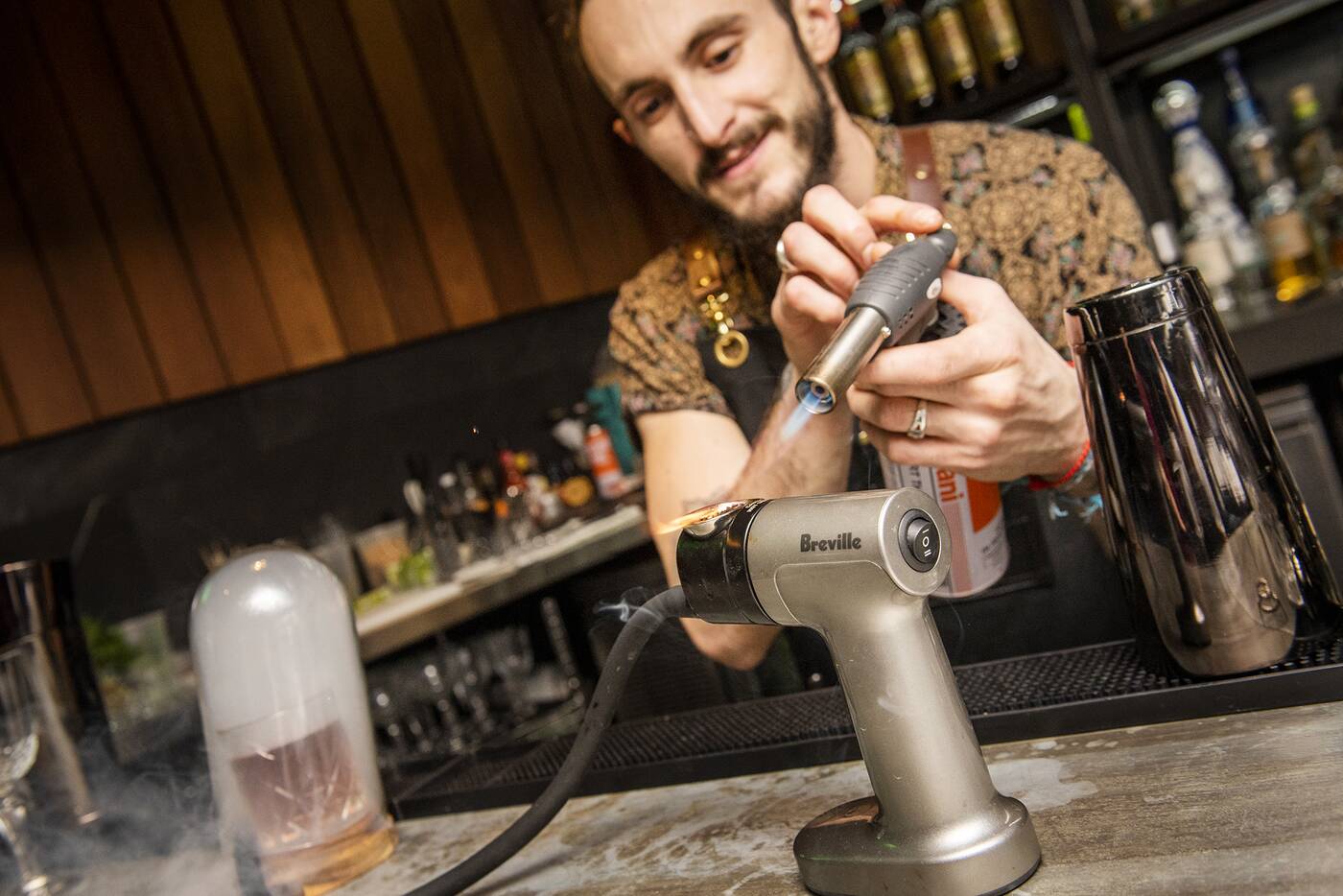 This drink makes a striking visual impression when presented, as the first half of its name comes from infusing the aroma and flavour of apple wood chips using a smoking gun. 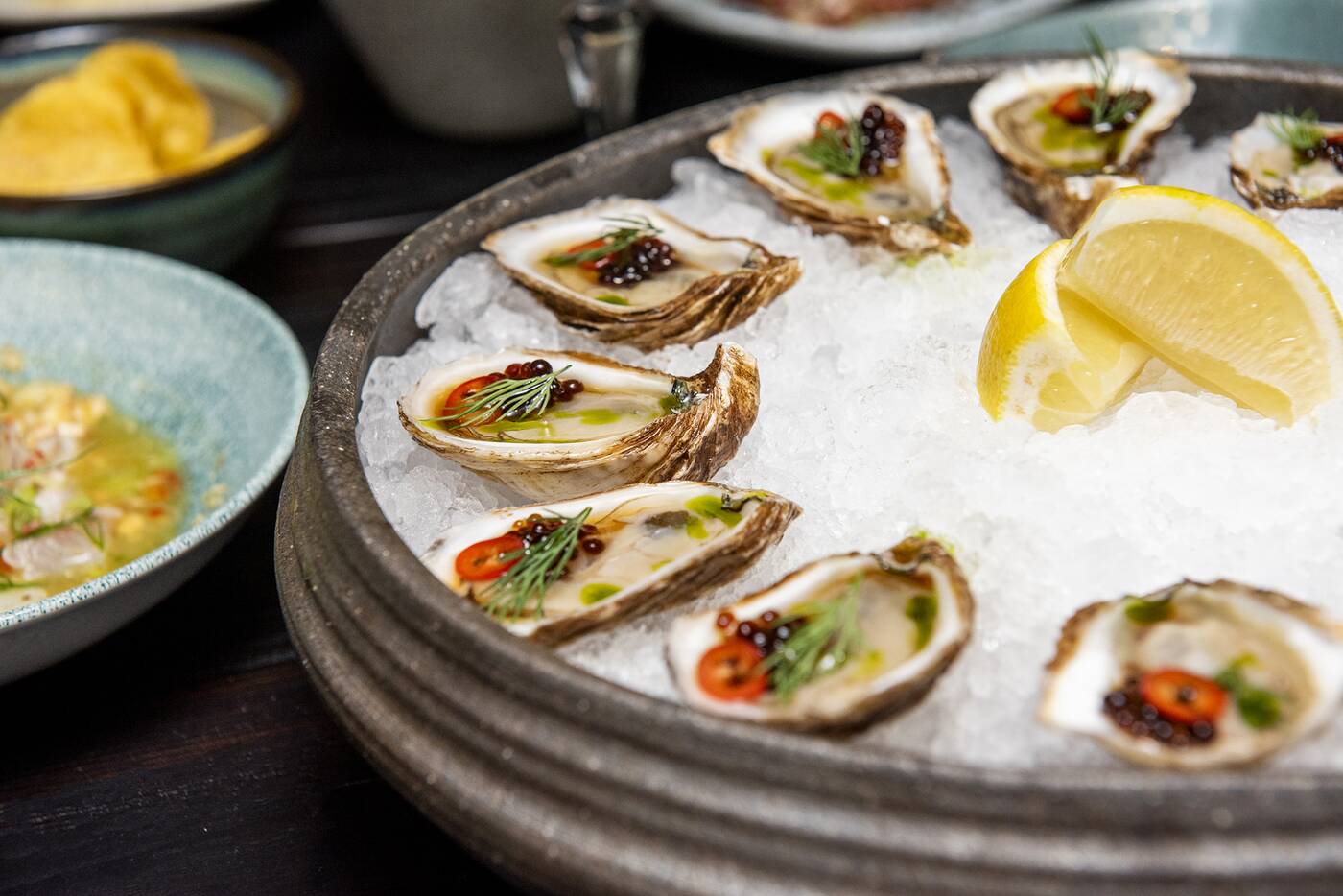 Another highlight comes from a different kind of bar: the Nikkei one. Nikkei is the name for Peruvian-Japanese cuisine, which fuses Latin American ingredients and dishes with Japanese techniques and tastes.

Oysters ($6/$23) arrive topped with delicate ponzu pearls, sprigs of dill and slivers of Thai chillis. The pearls almost look like caviar, and provide nice salty pops of citrusy savouriness that add a complementary hint of Asian flavour to the oysters, as does the spice. 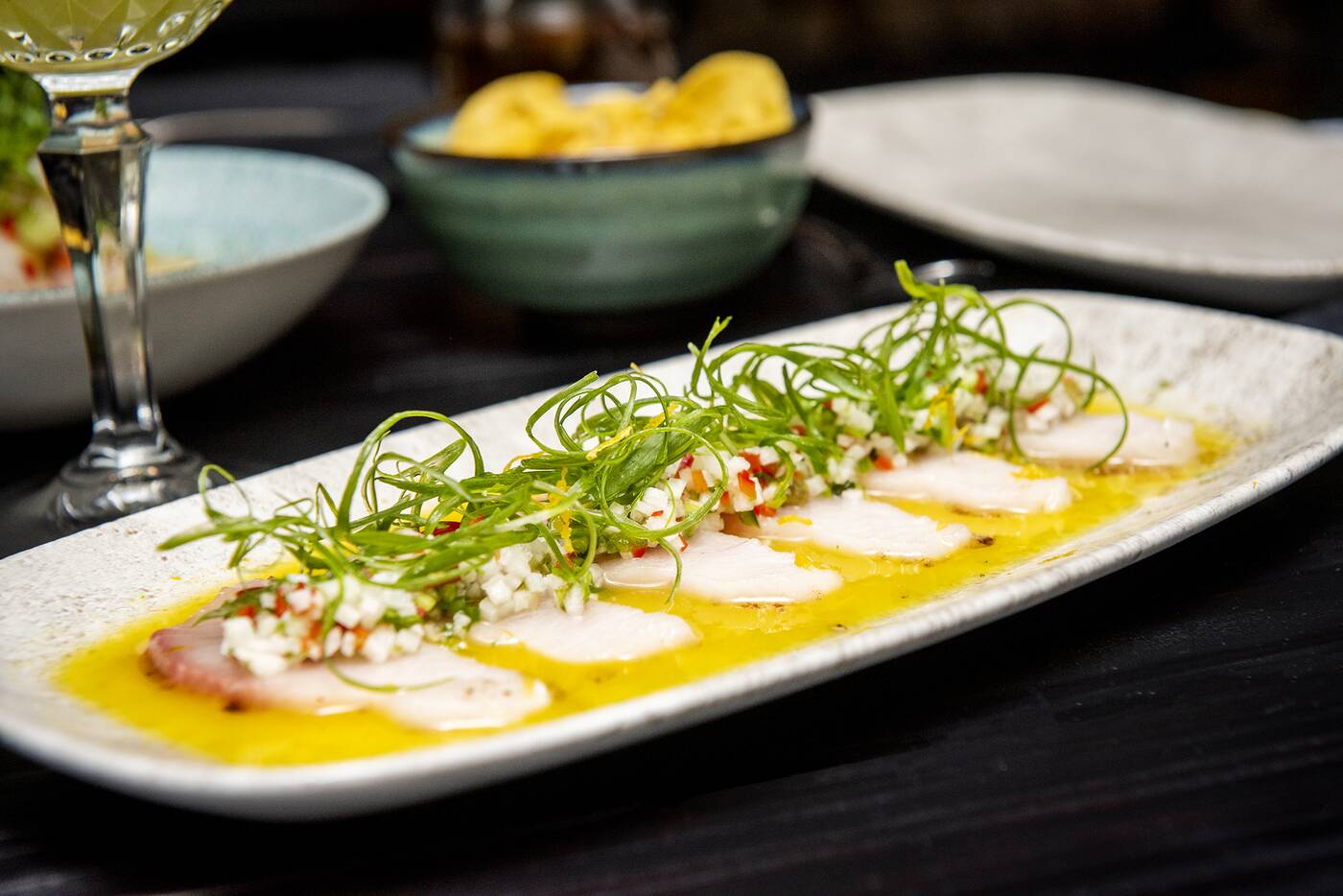 Also from the Nikkei bar is the colourful Hamachi en Salsa de Naranja ($24), pieces of sliced yellowtail in a citrusy sauce made with orange juice and coriander seed oil.

This dish hits every note: from fresh and spicy to savoury and sweet, it turns out to be my dining companion's fave of the night. 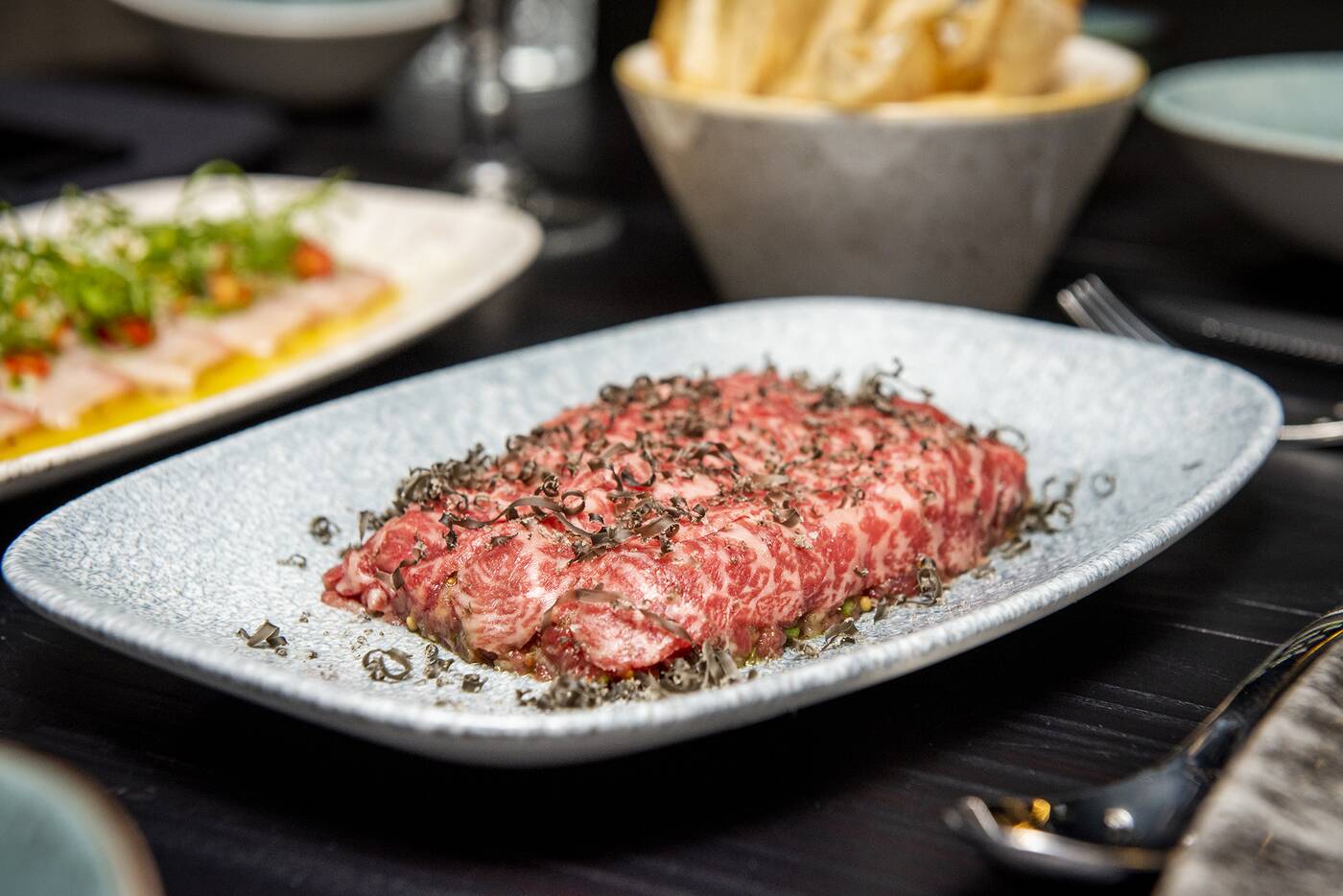 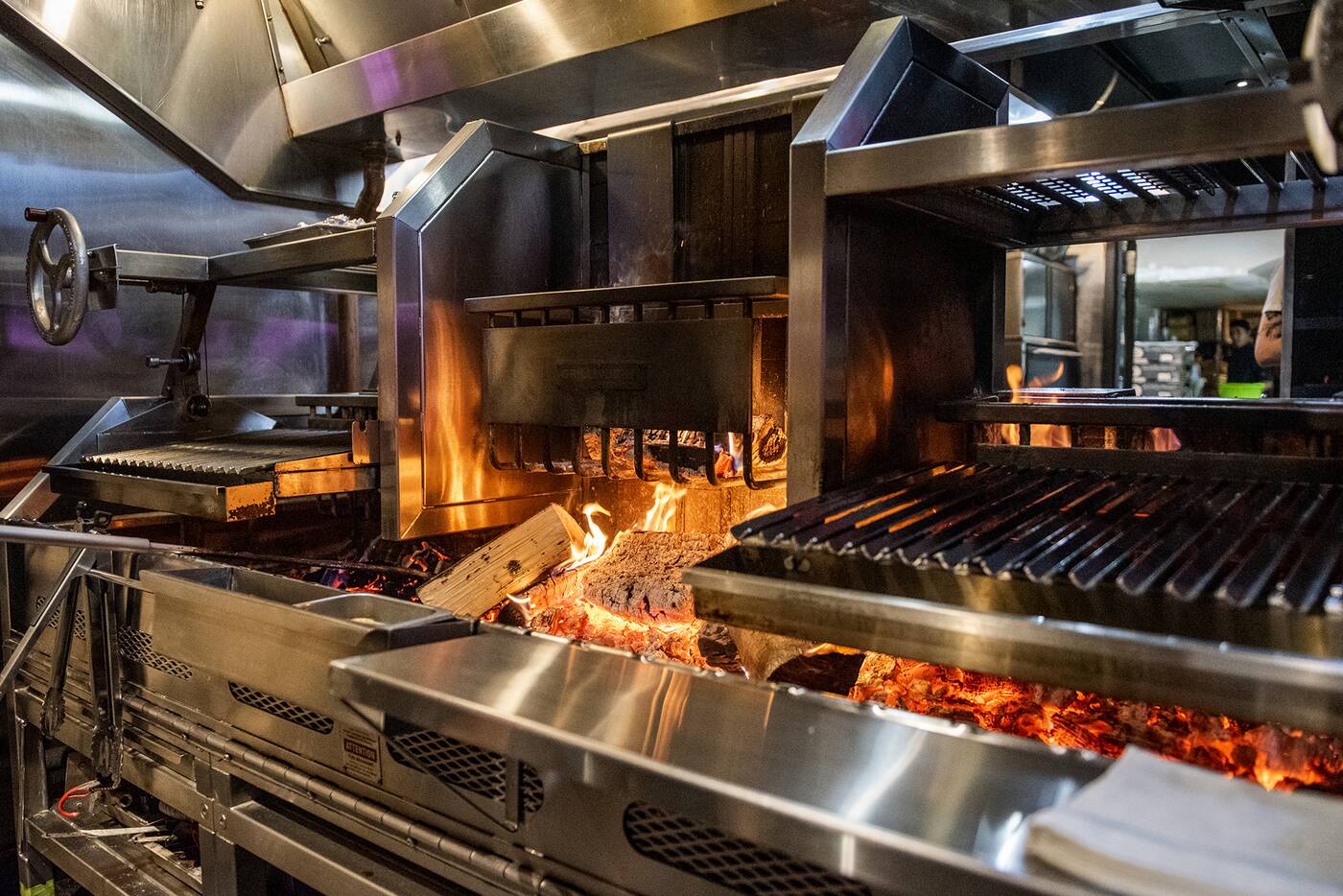 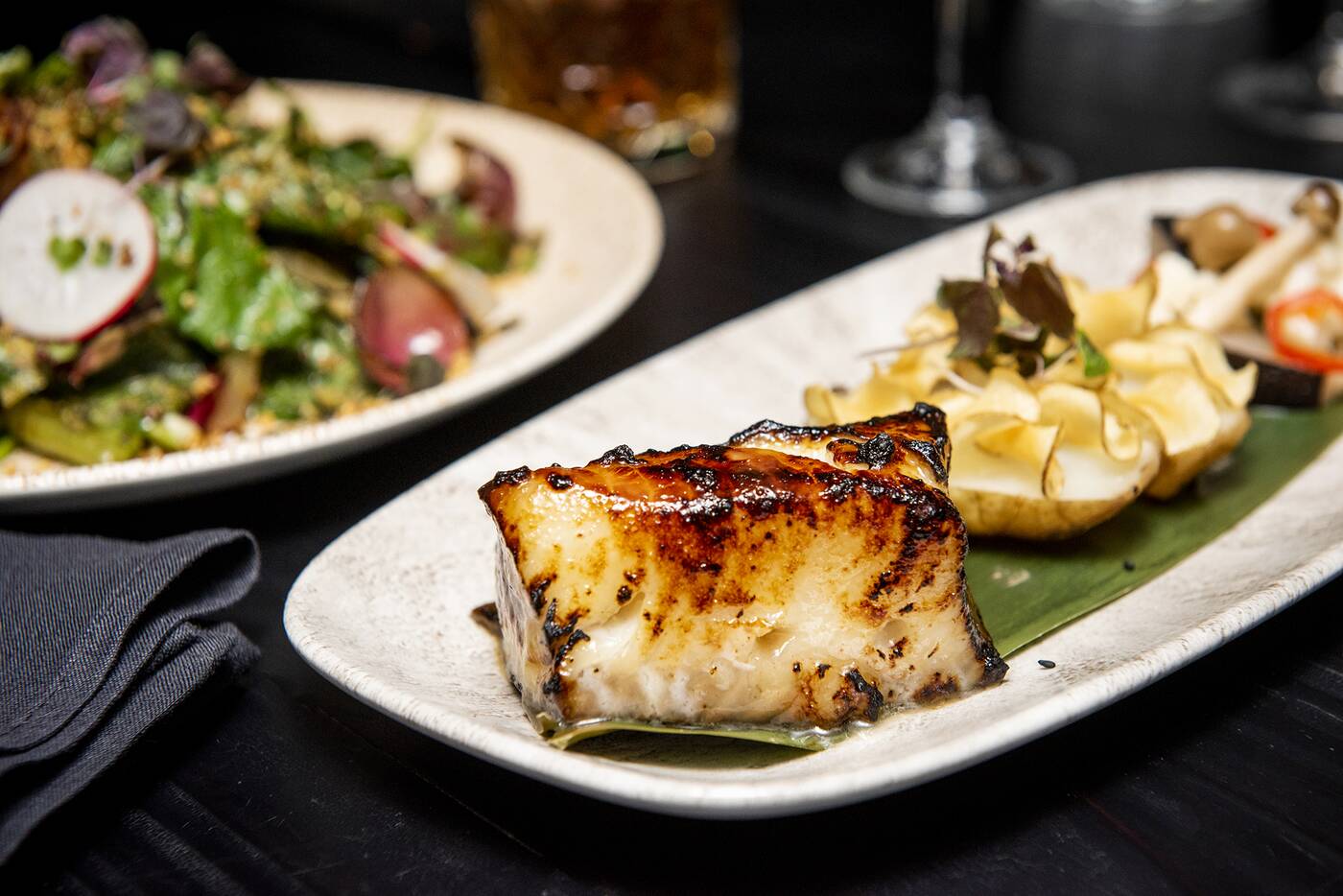 From the Ocean, there is Bacalao Negro con Miso ($34), a customer favourite from the restaurant's previous incarnation.

Carried over to this menu to appease regulars and convert newcomers,  the flavourful black cod (a.k.a. sablefish) is moist and succulent with Saikyo miso giving it umami and a hint of sweetness. Accompanied by crispy Jerusalem artichokes and pickled veg, it's easy to see why this is a popular order. 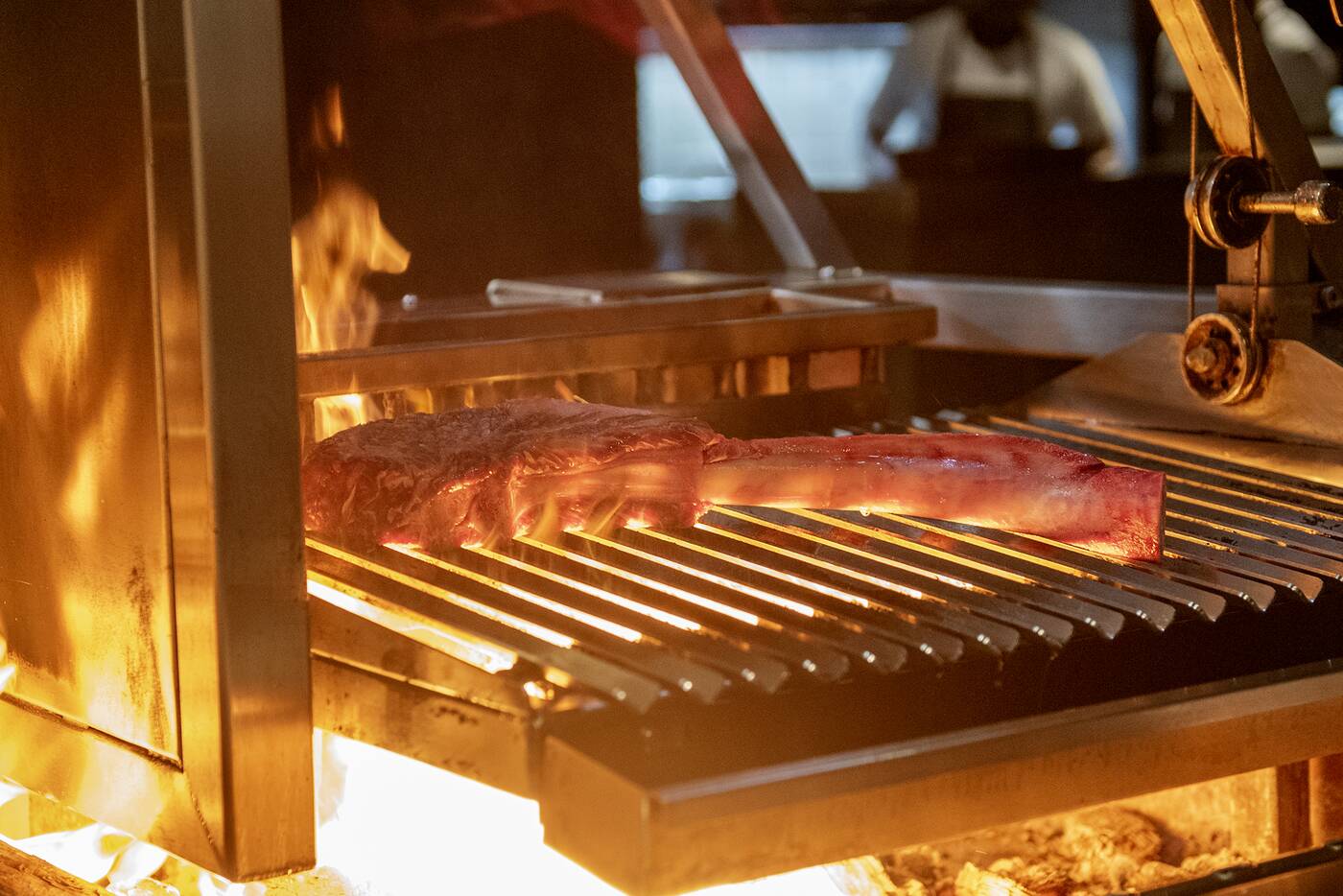 Of course, since this is a steakhouse, the main attraction here is the items from the Land. Filete de Costilla (market price), an impressively enormous Flintstones-sized Prime Tomahawk, is slowly cooked to order, to a tender, melt-in-mouth medium rare over the open wood-fired grill. 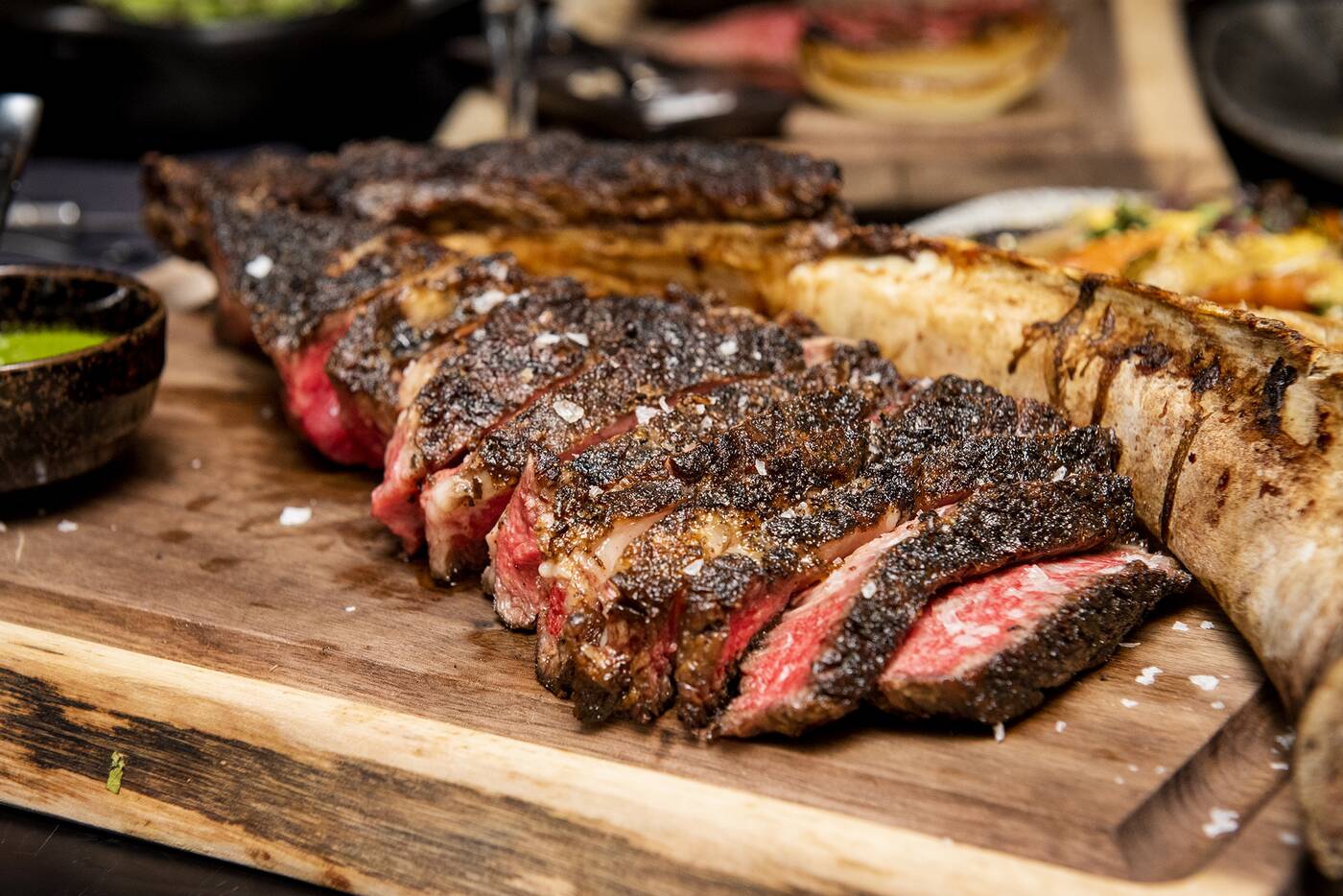 It's sliced and served with the bone, plus a trio of salts, charred garlic and a bright green, punchy Argentinian chimichurri. This is a carnivore's dream. 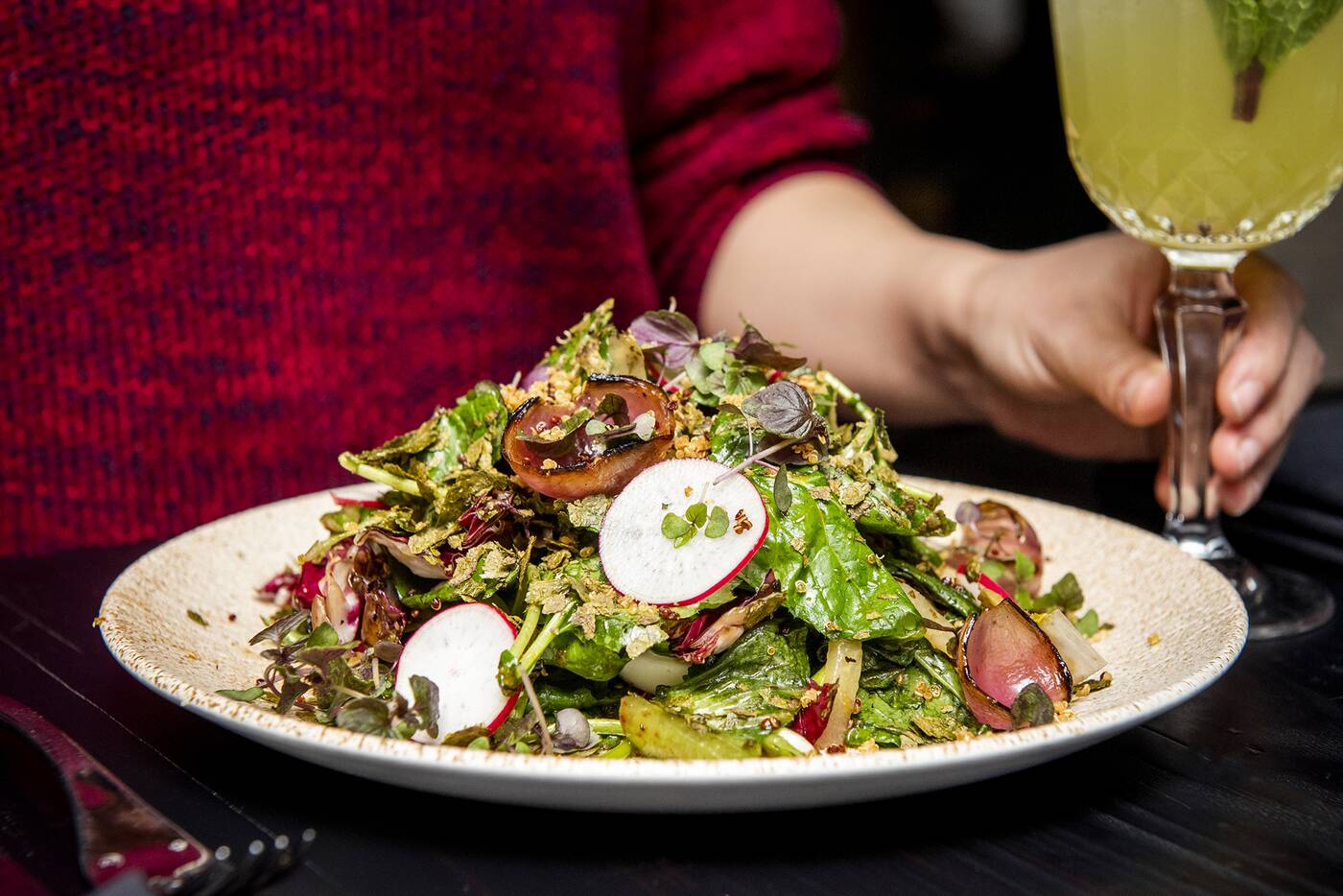 Sides dishes from the Garden portion of the menu include a grilled lettuce salad ($16) with quinoa and a tamarind ginger dressing. It's delightfully zingy, salty, bitter and sweet; proof that eating your veggies doesn't have to be a chore. 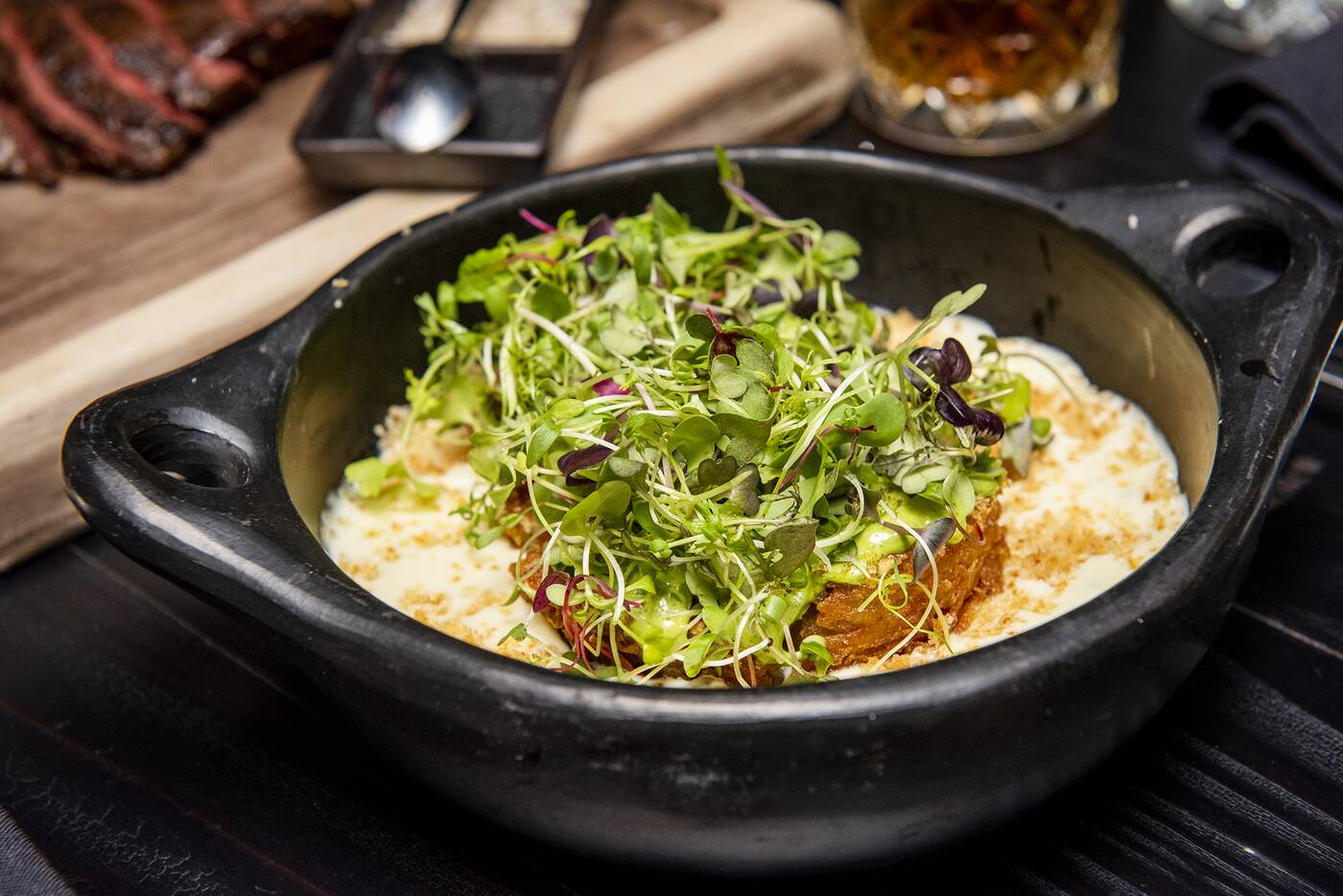 Papas Calientes ($18) is a hearty dish of potatoes three ways: mashed with creamy ricotta, in crispy croquette form and as a foam. Mustard cress and parsley add some lightness, but underneath the greens, this is pure comfort food. 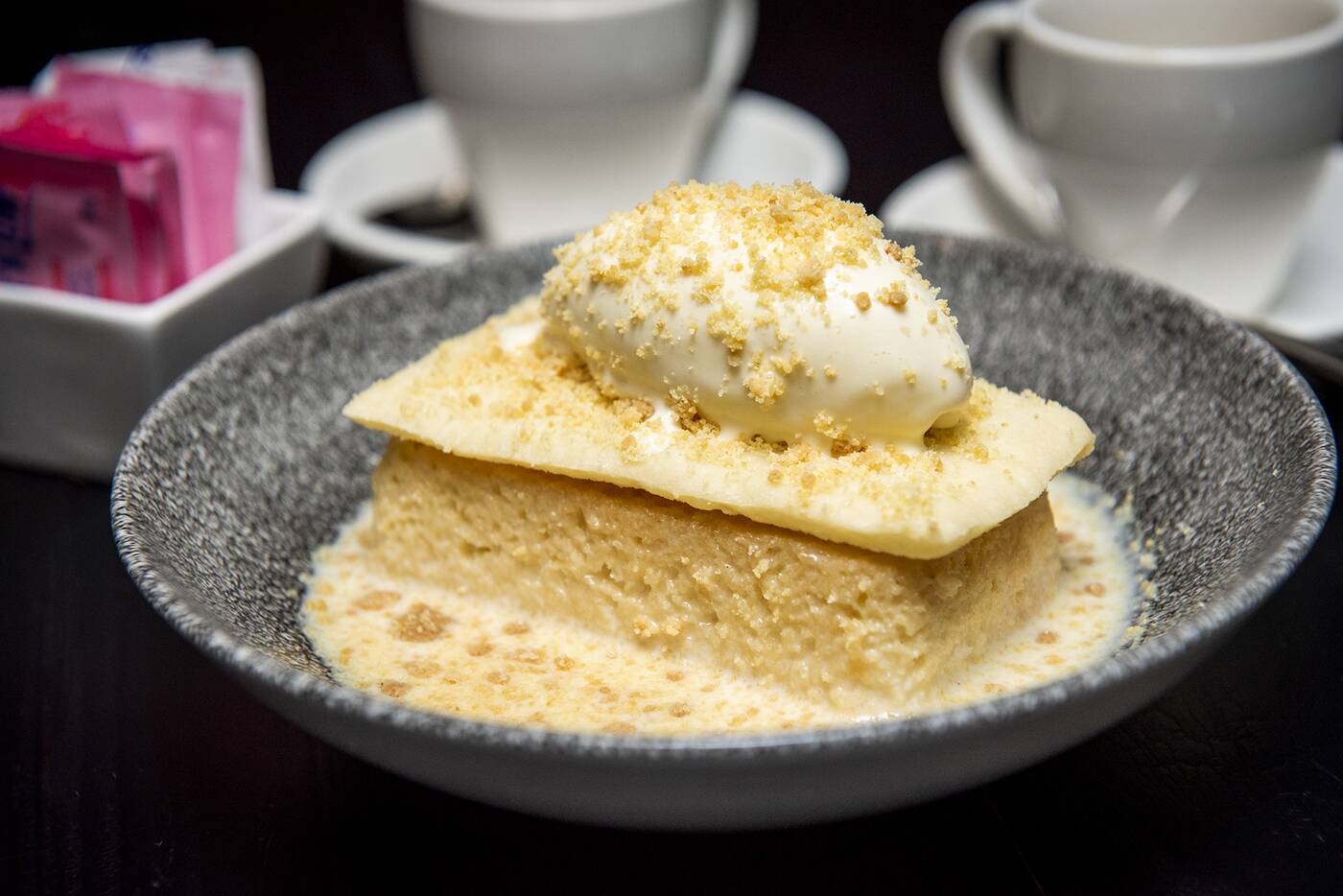 Tres leches ($13), a super moist sponge cake drenched in three different kinds of milk (evaporated, condensed and cream), is one of my all-time favourite desserts. There's a creative twist to this version, as it's also topped with a piece of shortbread, coconut ice cream and a graham cracker crumble.

The shortbread and crumble contribute a good, contrasting textural crunch to the cake, while the ice cream adds a fun tropical dimension. It's an excellent, refreshing take on tres leches, and paired with an espresso, is a perfectly satisfying end to this meal. 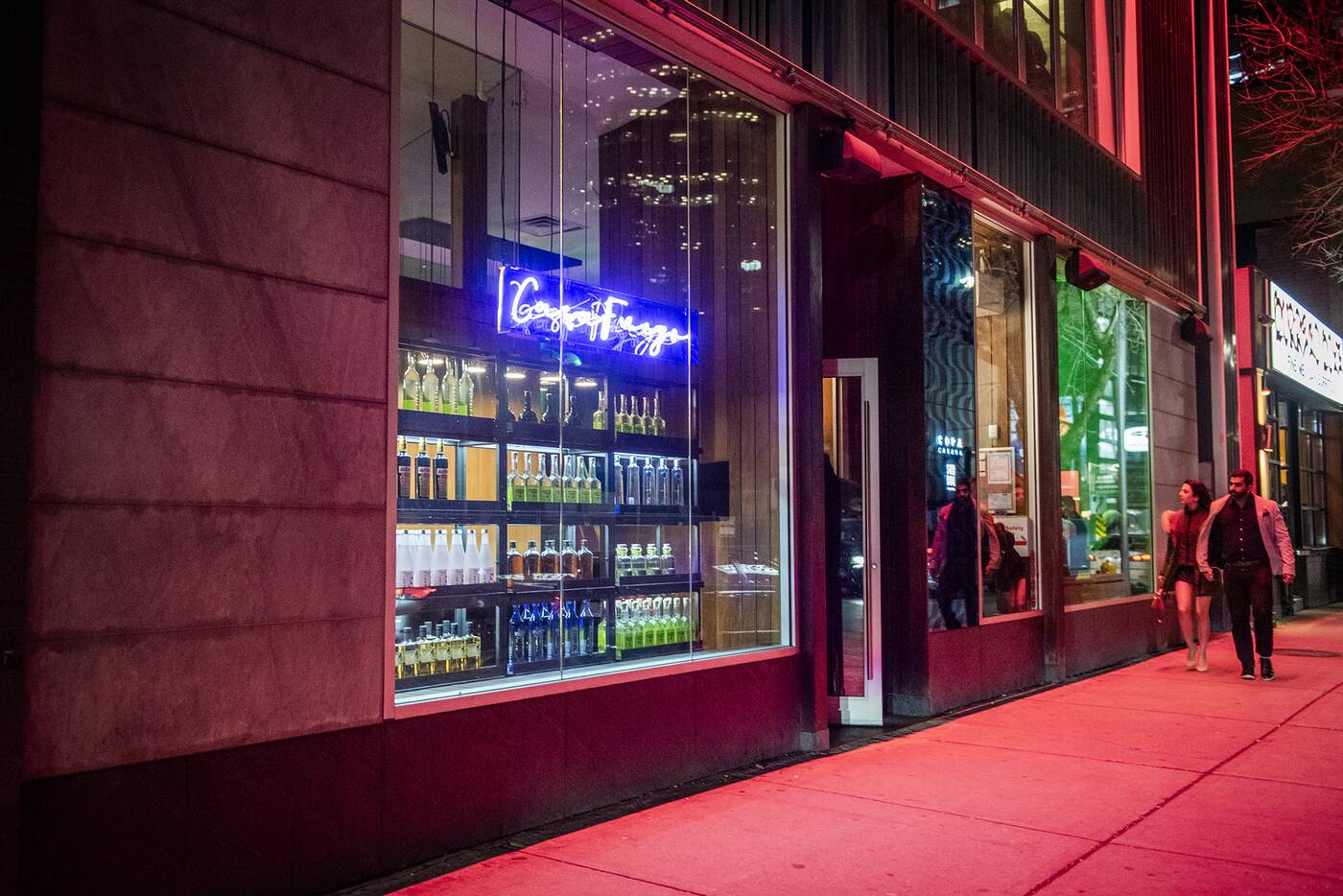