b.good opened its first Canadian location last month, bringing the farm-to-table fast food franchise specializing in salads, burgers and kale and quinoa bowls to Front St. East across from St. Lawrence Market . The chain was founded in Boston in 2004 by two friends (with an amusingly told history ) named Anthony Ackil and Jon Olinto, and expanded mostly in the New England area over the course of the last decade before making its way across the border.

The space combines two former offices and contains 30-odd seats (plus more when the front patio opens in the summer); the interior is bright with neon green chairs, exposed pipes, a

chalkboard that lists the restaurant's local sources for its produce, bread, beef, cheese and ice cream, plus pics of these "makers" displayed on the tables and counters, like it's proudly showing off members of its family. 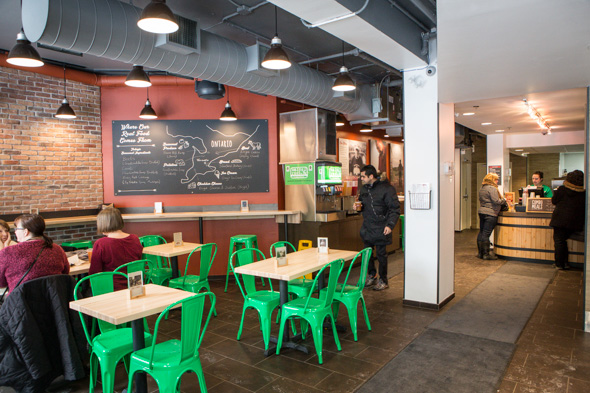 Menu items are consistent throughout the chain, but as mentioned above, they're always made with locally sourced ingredients; the emphasis is on healthy, organic, non-GMO, preservative-free food, and b.good likes to be transparent about these things - copies of a book explaining everything about the resto, including stories about the "makers," the ingredients in every menu item and nutritional information for each dish, are available for perusal (it's also all online ). 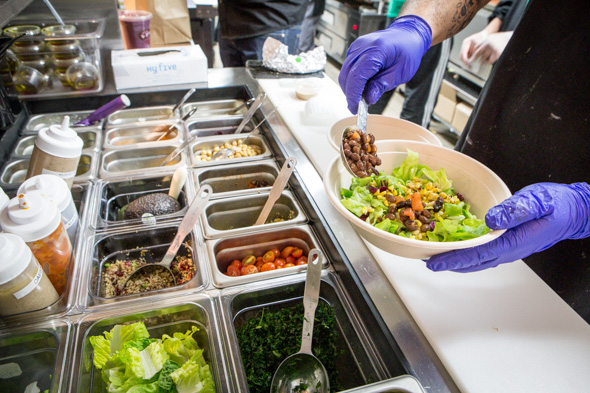 As for beverages, you won't find any Coca Cola or Pepsi products here. Instead, there are less guilt-inducing fountain sodas ($2.25, all one size) from Maine Root - which are all naturally sweetened with Fair Trade Certified organic cane sugar (and not high fructose corn syrup) in flavours like blueberry, root beer, raspberry seltzer and Mexican cola (and diet) - and b.good's own homemade, all-natural fountain lemonades in flavours that include strawberry, rosemary and beet-ginger. 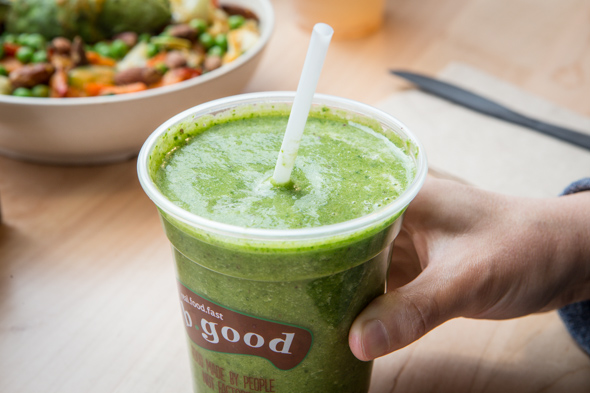 There are also healthy smoothies ($6.49 for 473mL) that change seasonally, like the Kale Crush, containing kale (duh), apple, pineapple, banana and pineapple juice, and way less healthy shakes ($4.99 for 473mL) that use Greg's Ice Cream . 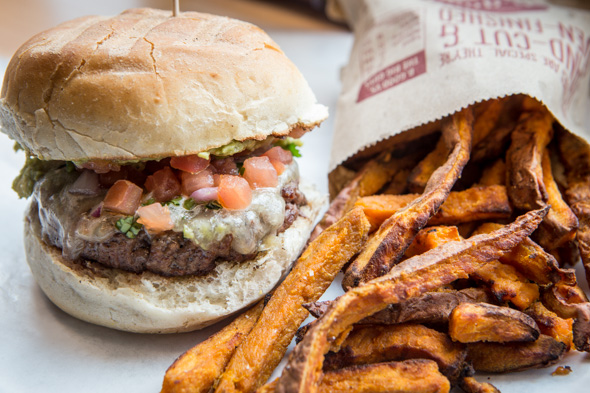 All-natural burgers and sandwiches start at $7.49, with four protein choices: a beef burger made from fresh house-ground chuck, a hand-packed turkey burger, a house-made vegan patty or grilled chicken ($1 extra). There are then six pre-set combinations of toppings and sauces to choose from with names like Cousin Oliver and El Guapo. 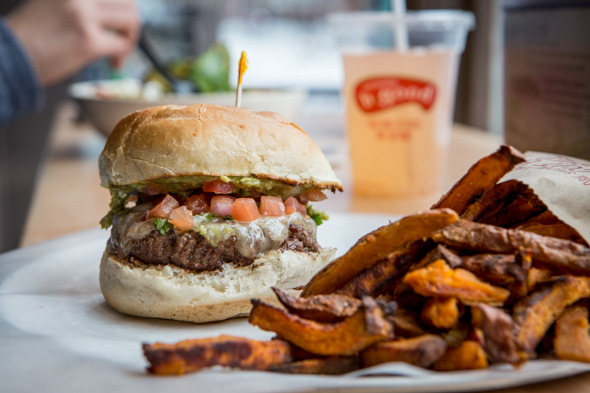 We try the West Side beef burger ($7.49; $4.89 extra for a combo with sweet potato fries and a drink) with a side of sweet potato fries ($3.99). Along with the well-seasoned beef patty, the burger contains avocado, cilantro, fresh salsa, chipotle puree and lime. The bun, which is from Silverstein's, is pretty meh (there's also a gluten-free option for $1.49 extra), but everything in between it is pretty tasty.

Like the patty, both the regular fries ($3.39) and the sweet potato fries are well seasoned, but since they're baked instead of fried, they're not particularly crispy. A lack of crispiness might be a worthwhile trade-off, though: b.good claims they contain half the fat and way less calories compared to McDonald's, Burger King and Wendy's. 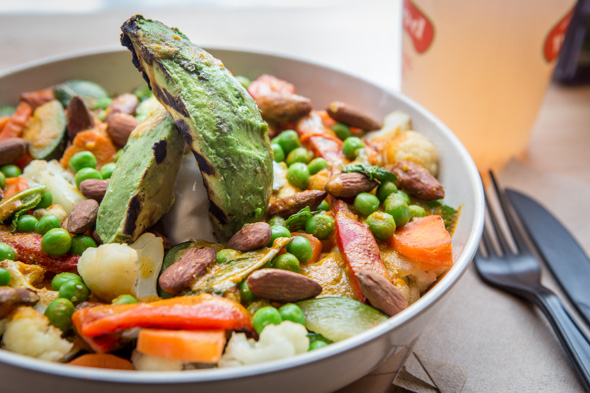 My personal favourite items on the menu are the kale and quinoa bowls ($10.99 each). They're packed with veggies and flavour, and definitely make for a substantial meal (possibly with leftovers). The curry and grilled avocado bowl has proven to be a popular order, and contains a colourful mix of organic kale, cauliflower, roasted red pepper, peas, other sauteed veggies, tamari almonds and quinoa, and is drizzled in a not-too-spicy curry along with a mint-yogurt sauce. 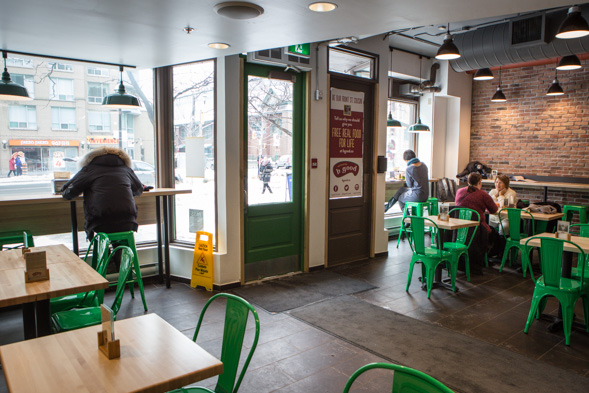 With b.good arriving in the city hot on the tail of Bareburger (both U.S. companies use Maine Root sodas, Sir Kensington's ketchup and Greg's Ice Cream here), this feel-good fast food trend seems like it will only keep growing. Two more b.good locations are set to open this summer on Queen West and in Oakville, along with the return of its newly named food truck (they named it Buck). And that certainly ain't a bad thing. 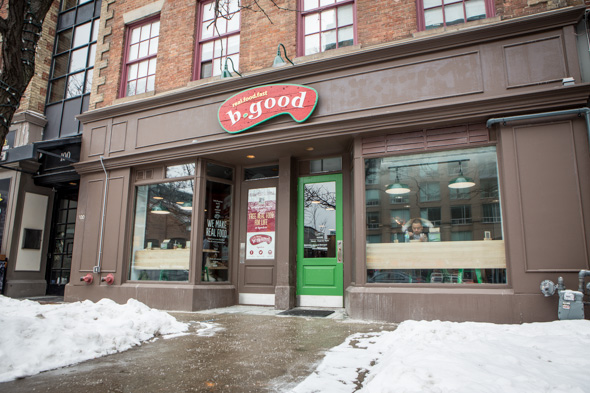