Bean and Baker Malt Shop is bringing back the mom'n'pop soda fountain to the city. Taking over the space that was previously the Bickford Flexitarian (and Linuxcaffe before that) at Harbord and Grace, this spot is a tribute to the 1940s and 1950s, replete with old-school diner decor, era-appropriate tunes and soda jerk outfits (who can resist those bow ties and hats?). 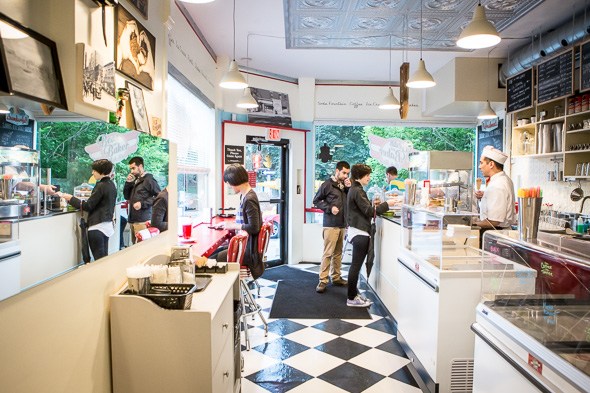 Co-owners and spouses Brennan ("Bean") and Liezel ("Baker") Anderson have always wanted to have their own cafe and bakery, and after visiting Brooklyn Farmacy in New York City they realized Toronto didn't have its own soda shop yet, so in addition to coffee and baked goods, they're offering up ice cream and artisanal sodas here as well.

Brennan, a long-time barista who's worked at Empire Espresso in Little Italy and Casa Acoreana in Kensington, has developed his own tri-blend of beans from Reunion Island, using a mix of roasts and origins for both the drip ($2) and espresso-based coffee ($2 and up); it has a chocolatey caramel flavour, and is neither bitter nor sour.

He says his blend is clearly not aimed at coffee purists or snobs, but "people just looking for a delicious cup of coffee." I try a latte ($3.75), and I'd have to agree; it's pretty tasty and has a nice balance of flavours. 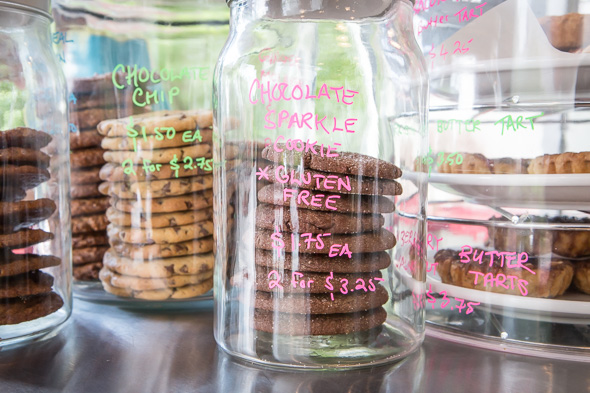 Liezel, formerly a pastry chef at El Catrin and a few other venues in the Distillery District, is whipping up baked goods that include apple or cherry warm pie pockets ($3.25 each) and cookies, brownies and butter tarts in a variety of flavours that can change up daily. 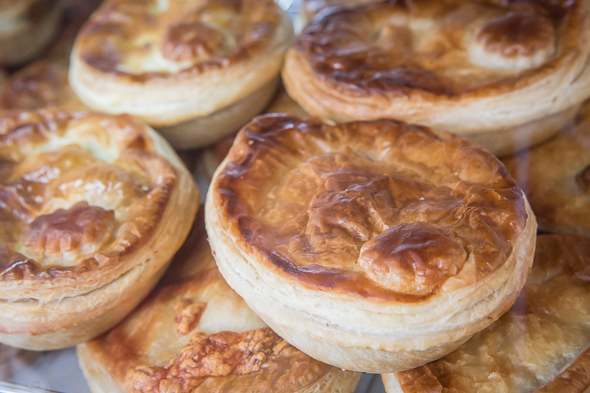 For those who aren't fans of confections, there are savoury pot pies ($6.85) and sausage rolls $3.50) from Wiseys. 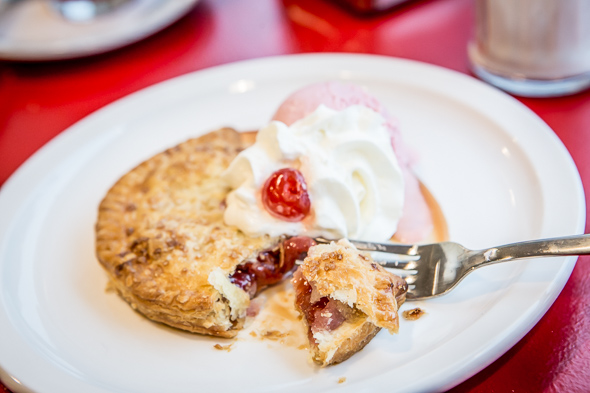 I learn you can also accompany your apple pie pocket with cheddar ($2 extra), which Liesel tells me is apparently a thing they do in England. It sounds like it could be good, so I'll have to try it next time. 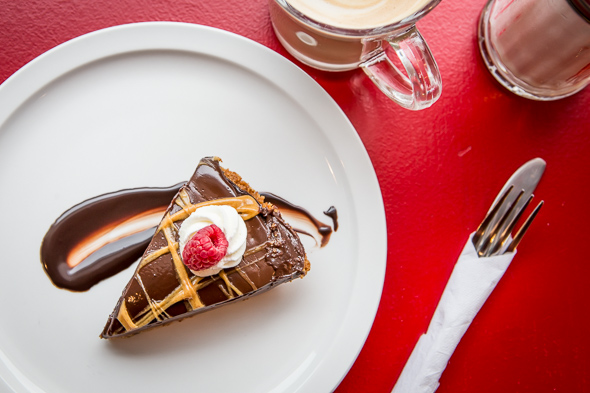 Next we split the pie of the day, which when we visit is an Ol' School Lunch Pie ($5.35/slice): a chocolate, peanut butter and raspberry jam pudding pie on a graham cracker crust. You can't really go wrong with that combo.

There are also ice cream sandwiches ($5.50 each, including tax) where you can choose to combine two different cookies with an ice cream flavour of your choice. 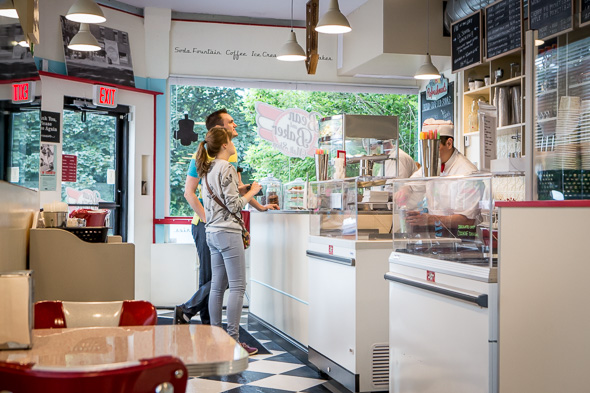 The Andersons tell me they've been going through a lot more ice cream (from Kawartha Dairy, Ed's Real Scoop and Coconut Bliss) than they originally expected, and they're pleased to inform us that they've had some lactose-intolerant customers who've come in to try a milkshake for the first time, since they serve dairy-free organic ice cream made with coconut milk here. 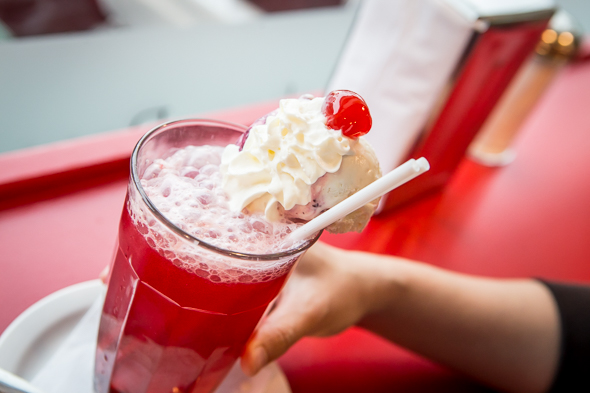 Handcrafted sodas ($3.50 each, including tax) with syrup flavours like Root'n'Cola, Lemon-Rickey, Gramp's Ginger and Vanilla Cream are all created in-house using natural ingredients (Hibiscus is made with steeped hibiscus flowers). They're done in small batches so that the Andersons can adjust recipes based on customer feedback and finetune the flavours. 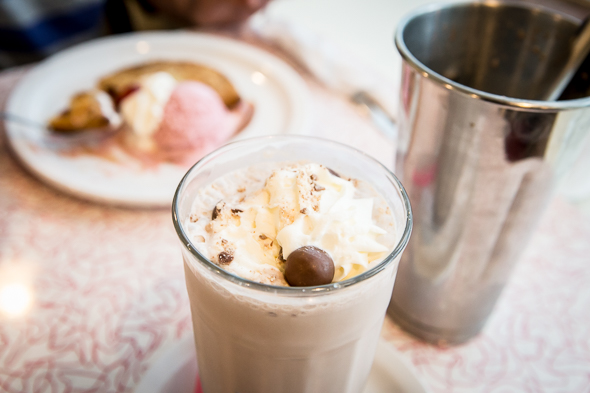 A hibiscus soda float ($5.25) with a scoop of Black Raspberry Thunder ice cream is a fizzy and frothy delight, while the chocolate malt shake ($6.25; $7 for dairy-free and 50 cents extra for malt) contains Ovaltine and crushed malt balls for a pleasant bit of crunch. 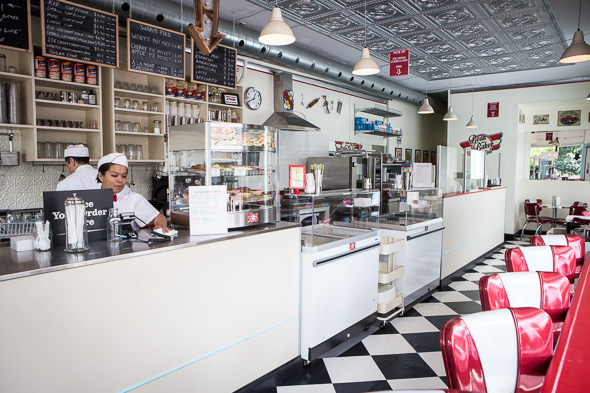 With its super friendly service, this is the perfect place to hang out and pretend you're a character in an Archie comic (the Andersons tell me they've been attracting retro enthusiasts all decked out and ready to go swing dancing at Dovercourt House) or to pick up a treat for a summer stroll through Bickford Park across the street. 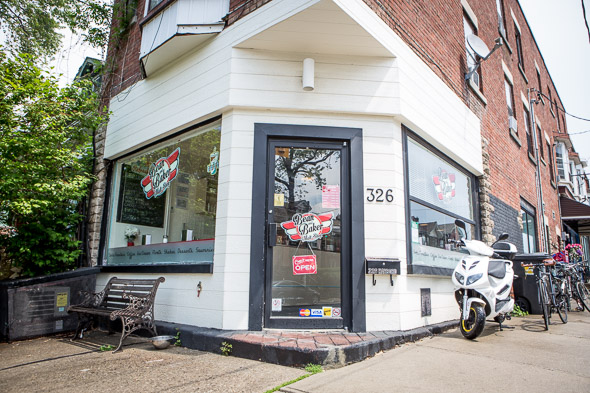