Aria is pure eye candy. Taking its name from the Italian meaning for air, the restaurant has a breathtakingly beautiful interior, with 35 foot high ceilings in the prime and constantly evolving Maple Leaf Square. Celebrating their first anniversary next month with an almost entirely new menu, at least someone in the neighbourhood has a reason to rejoice (oh, those ever-crappy Leafs). 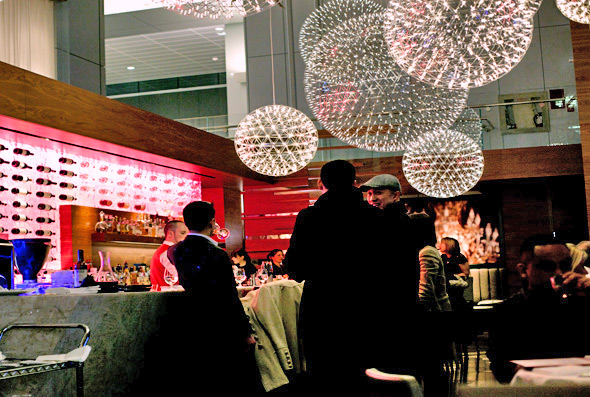 Architect Stephen Pile carefully thought out the restaurant, with banquette seating abound and a spiffy marble bar for the target demographic of the location â well-heeled hockey fans in for a pre-game risotto, or perhaps more commonly, Telus execs down to take advantage of the almost museum-like surroundings. The kitchen is helmed by a young executive chef in Eron Novalski, while the restaurant is owned by Guido Saldini and Elena Morelli, the proprietors of Noce for many years. Alas, pastry chef Steve Song is no longer with them. 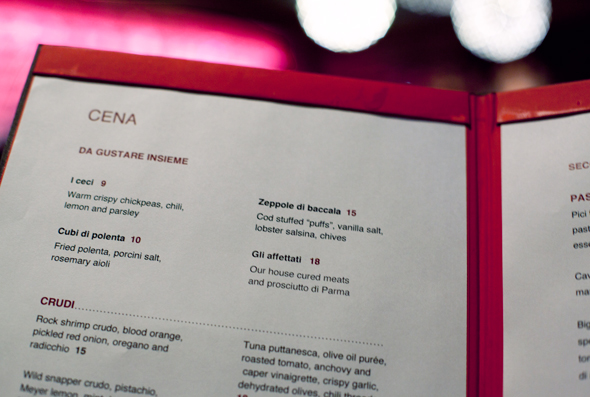 Reception is friendly and swift. We were led to our table, and I promptly secured the cozy banquette side that featured small pillows adding to that lux feel. We reviewed our menus and perused the extensive, (not so shockingly) mostly Italian wine list. The view was vibrant and there was plenty to be distracted by. Throngs of disappointed Raptors fans leaving the game, bright neon lights from the buildings outside the all-glass exterior, and at one point I even busted my dining mate checking out the score on the ACC's giant outdoor TV (the Leafs also lost on the night of our visit). 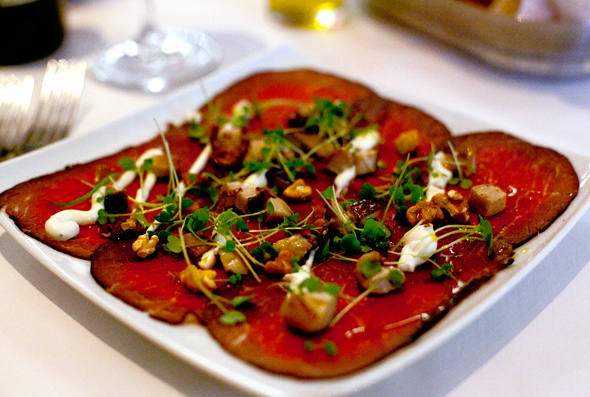 Determined to be distracted by something other than sports, we order a couple of appetizers to get the party started. The Beef Carpaccio ($18) sounds promising on the menu, the staple of so many Italian institutions. Here, it's accompanied by a meandering of arugula sprouts, creamy gorgonzola drizzle, chewy walnuts and porcini mushrooms. Certainly a meaty affair, but unfortunately under seasoned. After a quick fix (although not on tables, servers will happily tote over a small bowl of sea salt and hot chili flakes) it was much more dynamic.

With a somewhat goofy presentation, my partner was delivered his Carne Cruda ($15), which is very much like steak tartare with a cracked egg on top (see leading image). The beef was moo-worthy fresh, the creamy raw egg, all in a delicate balance. The fries were a tasty and unpretentious accompaniment. My mate was moaning about the generous garnish of rosemary, but not being a big fan of rosemary I guess that's to be expected. 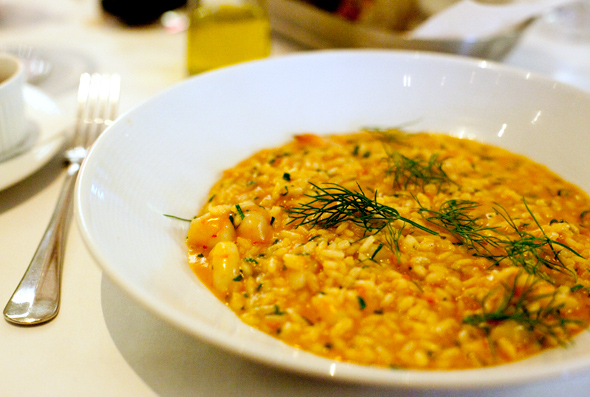 The Shrimp Risotto ($26) in a lobster broth is best described as delicate; not overpoweringly fishy and cooked perfectly, which surprisingly isn't necessarily a given with Risotto at Toronto restaurants. Ther abundant portion of shrimp comes shell-off, which is a small thing, but quite welcome. I hate mucking around the bowl searching for tails. 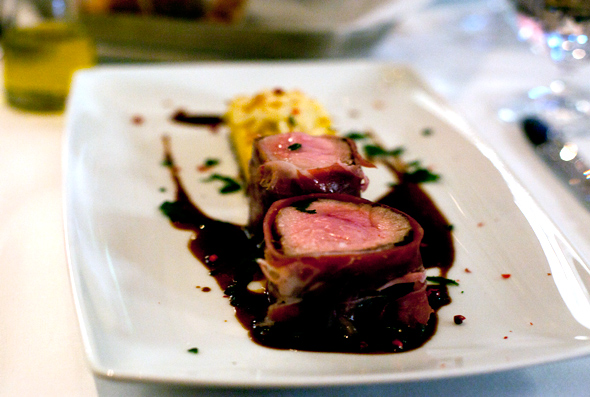 The Veal Striploin ($37) comes sheathed in prosciutto and swimming in a tangy balsamic reduction. The side is a lovely portion of a potato pancake, with thinly sliced white onion that seems to float above the potatoes, similar to the dramatic dandelion-esque lights above our heads. The striploin was cooked to our desired medium rare, and well complemented by the balsamic. 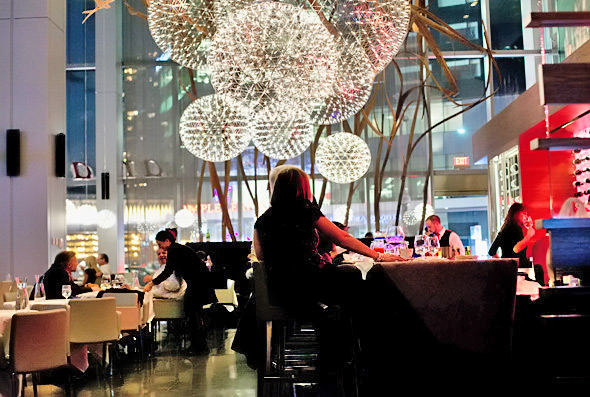 Even though Aria is technically Noce's sister restaurant, it feels more like a glamorous aunt, studded with jewels and air kisses. Service was mostly attentive and very friendly. My only grumble is that the bathrooms are located outside the restaurant, accessed only by a card key you must first get from the hostess.

Lest I complain too much, however, Aria does most things right â unlike they're neighbours across the square. 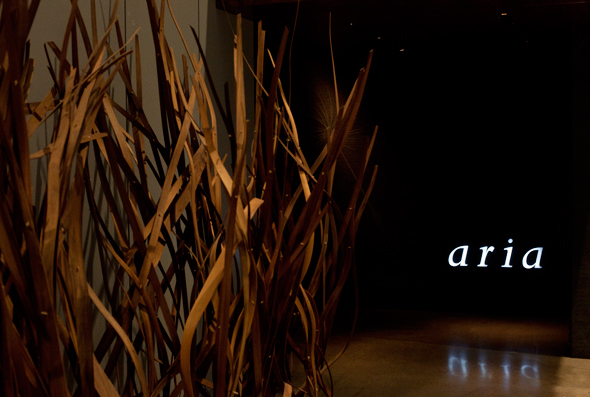