Annette Food Market occupies the space that was previously Italian restaurant Sagra in the Junction . Owners Max and Amara Mancuso, who are also the brains behind The Good Neighbour next door, named their new eatery after the original grocery store that used to occupy this strip of Annette St.

An inviting space with charming wood and brick accents, it seats 24 with a mix of bar seating, small tables and reclaimed church pews as banquettes. A harvest table in the back room for which you can make reservations with groups of eight or more seats 16. 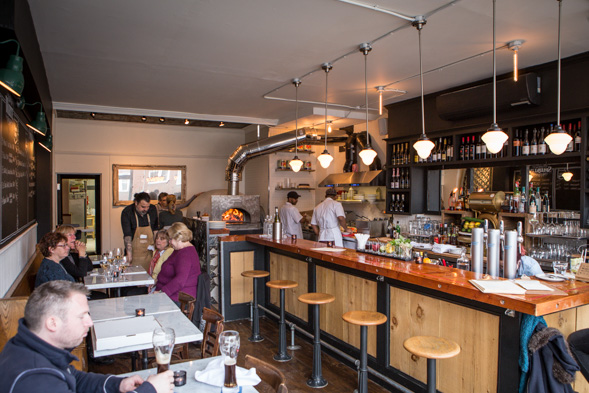 The Mancusos had to lobby for a liquor license for the restaurant, receiving support from the local community with over 2,000 signatures on the petition. "If not for the community we wouldn't have been able to pursue this - it wouldn't have happened," says Max. 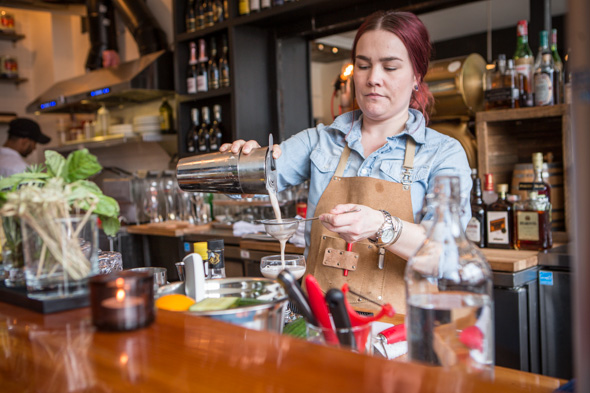 Stiegl ($7.25), Delirium Tremens ($7.50) and Erdinger ($8) are the three beers available on tap, and wines are categorized by style ("big and bold" or "smooth and silky" reds, "fresh and crisp" or "rich and creamy" whites) instead of by region, and all are available by the glass - including sparkling wines.

The selection is written on a blackboard along the wall; Max tells me they're all from small wineries, so it's constantly changing, and once a bottle is finished, it's gone. 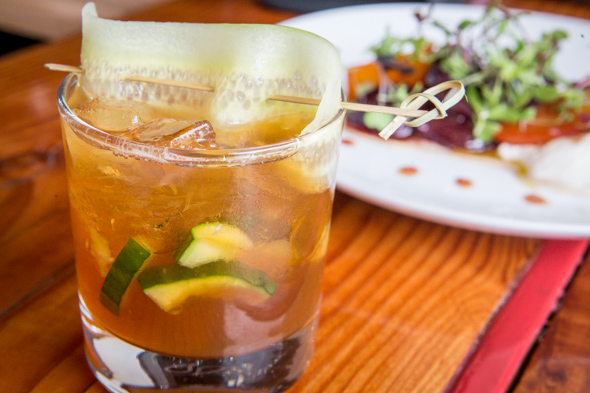 Seasonal cocktails developed especially for the restaurant by bar manager Meaghan Murray ( Northwood , Patois ) currently include a barrel-aged Negroni ($11), which spends six weeks in a 10-litre oak barrel, adding a smokiness and depth to its flavour. 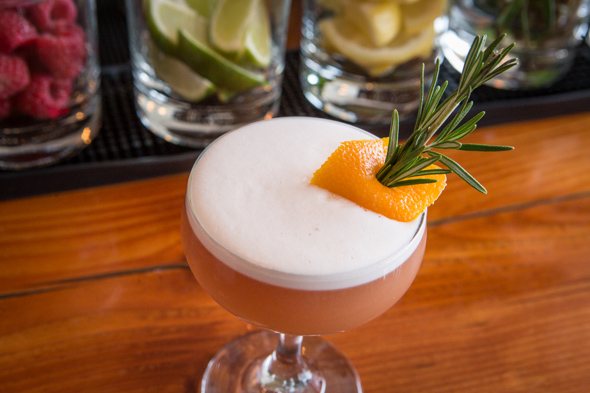 I'm a sucker for sours that use egg whites, and Murray includes a six-spice syrup (star anise, cinnamon, cardamom, clove, nutmeg and chili pepper) that adds an interesting - and comforting - dimension to the drink. 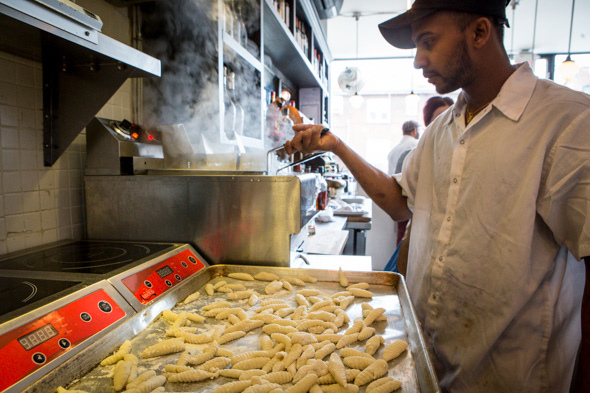 Comforting is also how I'd describe the food coming from chef Sivi Sitsoruban, who is a holdover from the short-lived Sagra. He tells me the Mancusos gave him an opportunity to continue what he'd started there, which was a wise decision on their parts. 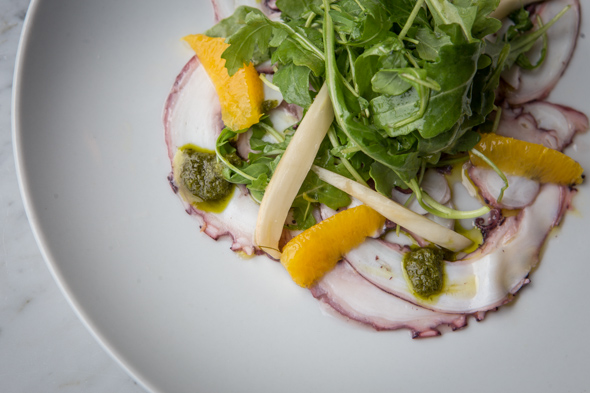 We try a dish from each section of the menu, starting off strong with an octopus carpaccio with orange, pickled fennel and salsa verde ($13). The octopus is thinly sliced, and super tender.

I've never eaten it this way before, and find it's a happy-inducing mix of textures and tastes: the chewy octopus and crunch from the fennel combined with a bit of spice from the salsa verde, some sweetness from the orange and tartness from the pickling makes it feel fresh. 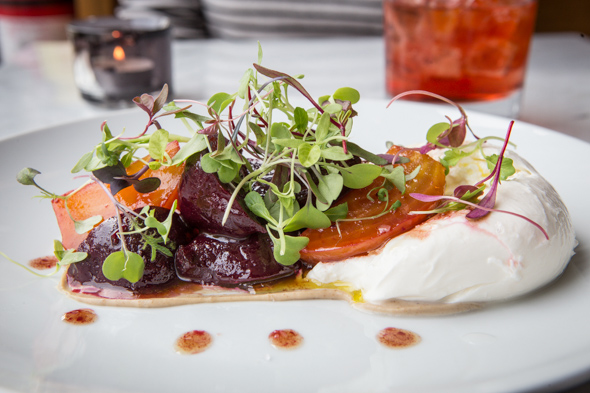 A roasted beet salad with burrata cheese and a chestnut purée ($12) is another winning offering. The chestnut purée accentuates the flavour of the cheese, whose creaminess pairs perfectly with the sweet beets. It's also totally on trend with all the other fashionable beet salads currently gracing restaurant menus. 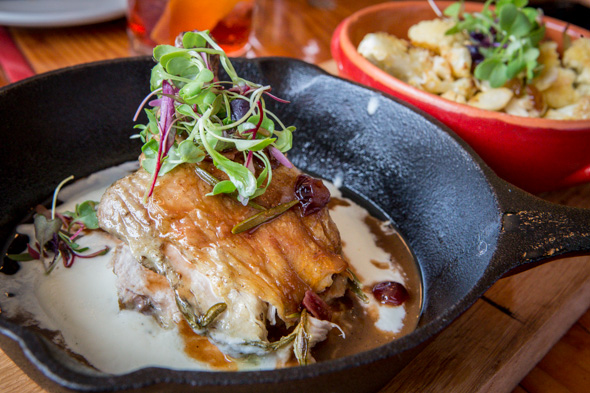 Spring chicken supreme with roasted fennel purée and truffle oil ($12) is brined for 12 hours, marinated with rosemary, cooked sous vide and finished with a sherry demi-glace. 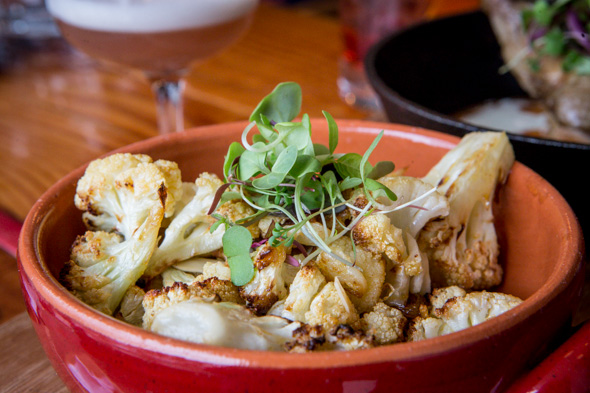 Its time-intensive preparation pays off with moist, tender, meat. It's paired with wood-fired cauliflower ($7) - another hot food trend - accompanied by almonds, raisins and smoked paprika, and actually make us want to eat our veggies. 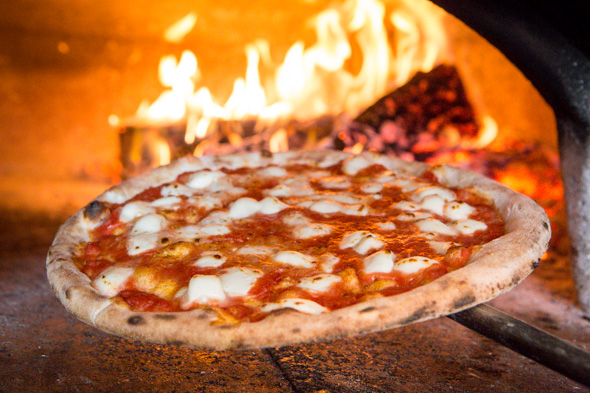 Neapolitan-style pizzas are made in the wood-fired oven inherited from Sagra. The Margherita ($12) with San Marzano tomatoes, fior di latte cheese and basil is simple but done well. Its super-thin crust, which is made from dough aged for three days, is salty, crispy and chewy in all the right places, with a nice amount of char. 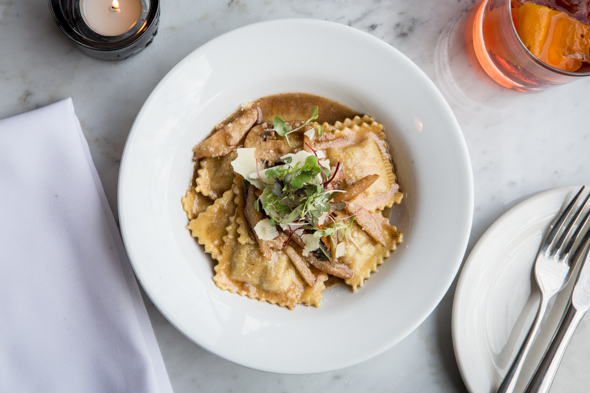 Fresh porcini mushroom ravioli with pears in a butter sage sauce ($11) is the epitome of comfort food; the pasta is cooked perfectly al dente, the filling is yummy and the pears add a bit of sweetness and crunch. I overhear a nearby diner complimenting the kitchen on the house-made gnocchi; it's clear Sitsoruban knows his pasta. 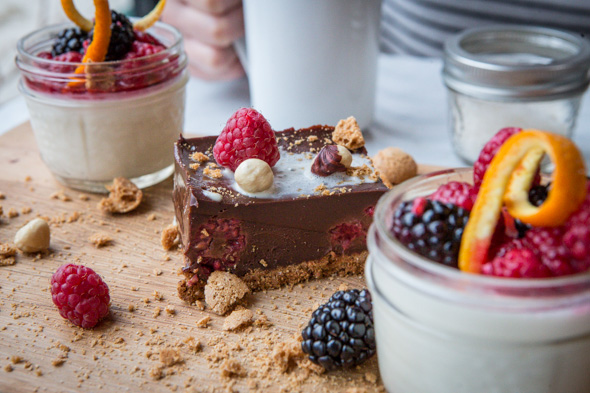 Finally, for dessert, there's mixed fruit panna cotta ($6) and a chocolate raspberry bar ($7), which are beautifully presented with crushed amaretti (almond cookies), hazelnuts and a drizzle of crème anglaise. Add some French press coffee ($4) and you've got my ideal end to a meal. 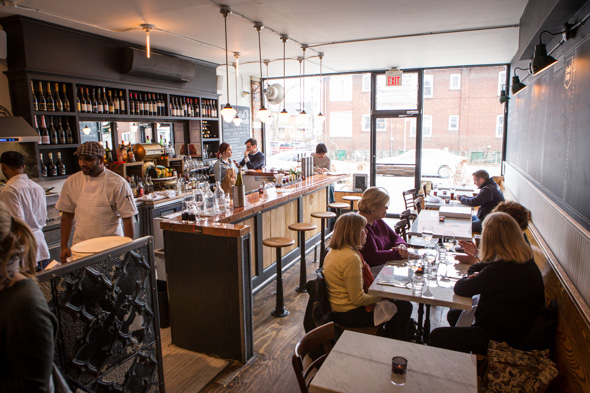 Murray sends our stuffed bellies off with an Italian digestif of her own creation: house-made vanilla liqueur with Triple Sec and Fernet. Mmmm...we'll be back! 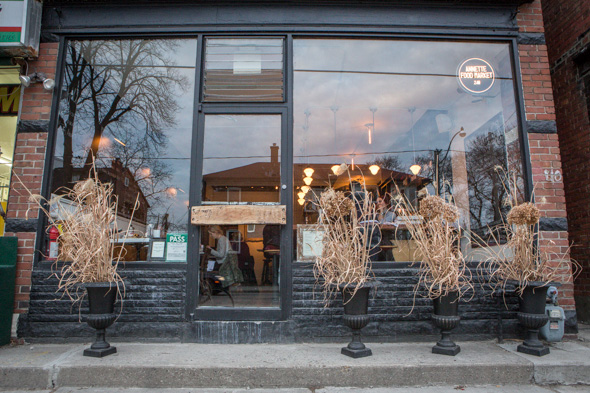 Annette Food Market is open from 5pm 'til late Tuesdays through Saturdays.