Amano Trattoria sanitizes tables between each guest and also has hand sanitizer available at he entrance and around the the bar counter.

Amano Trattoria is an Italian restaurant with a menu made up of six different courses to choose from.

This restaurant near Front and Church hails from the original Amano Italian Kitchen located in Union Station and Newmarket. 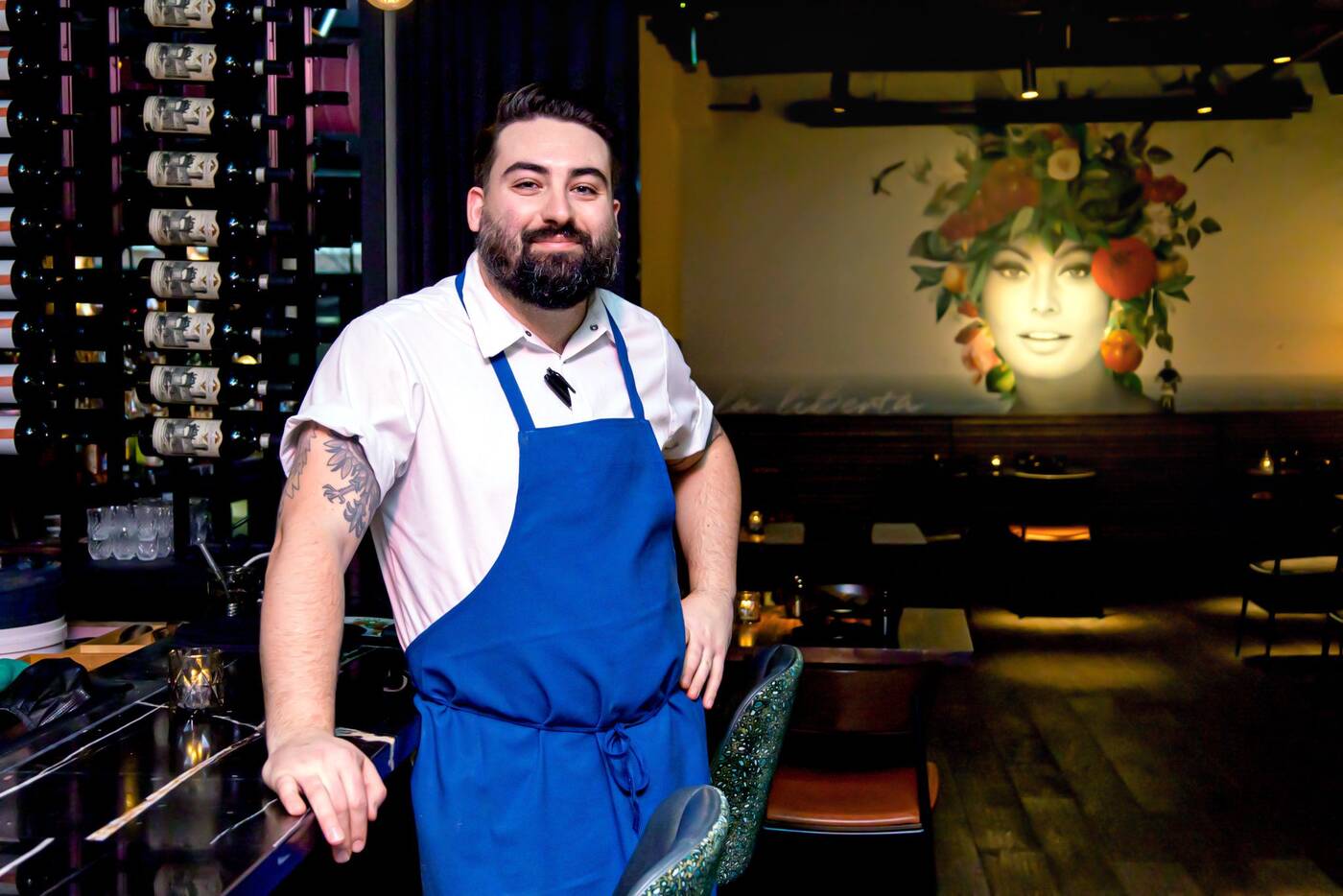 Executive chef and operating partner Michael Angeloni says it's been his dream for almost a decade to open up a space where he could serve food inspired by his grandmother's Italian cooking. 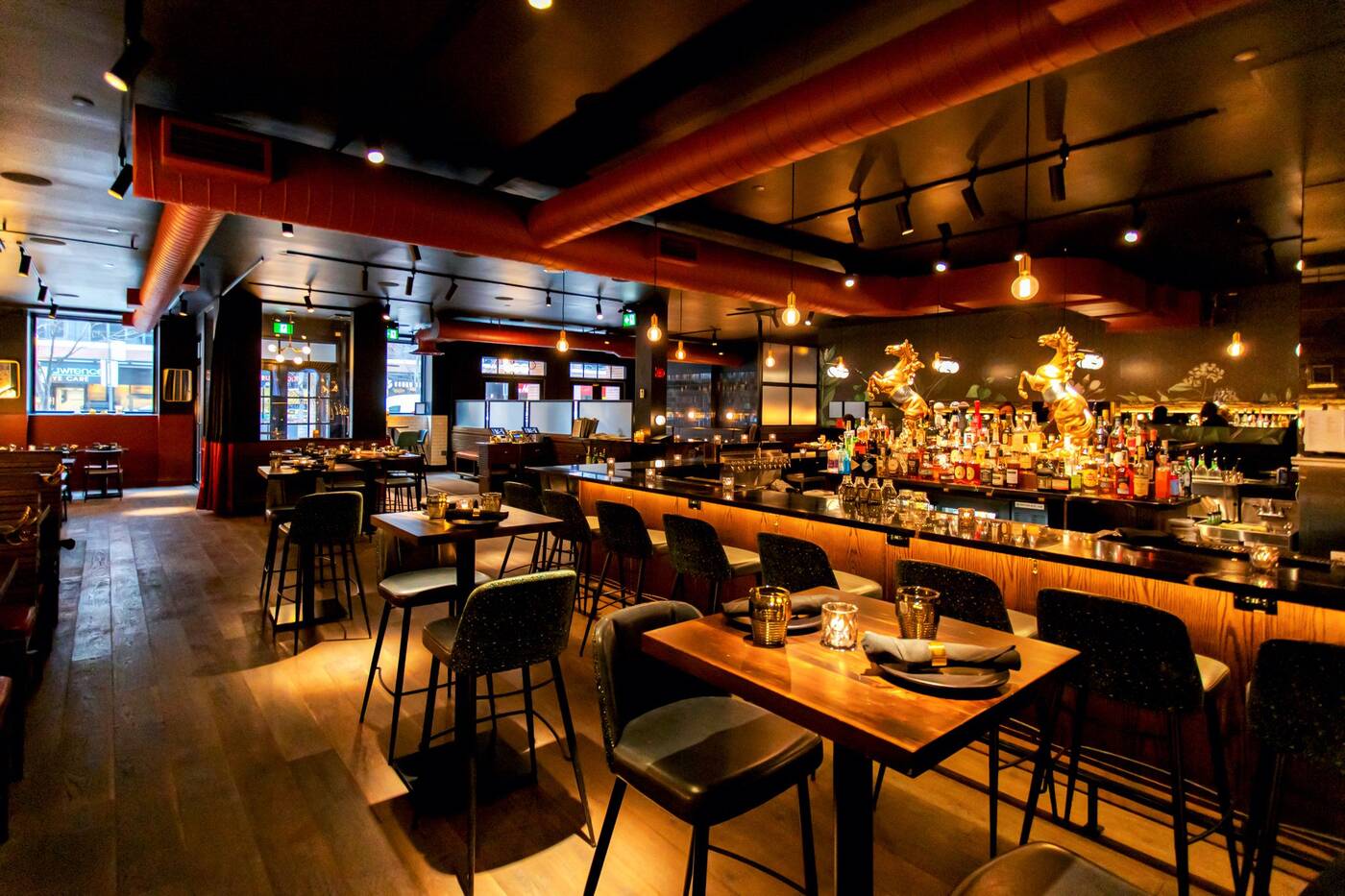 The restaurant spans across five sectors of seating space along with a wrap around bar in the centre adorned by gold stallion horses. 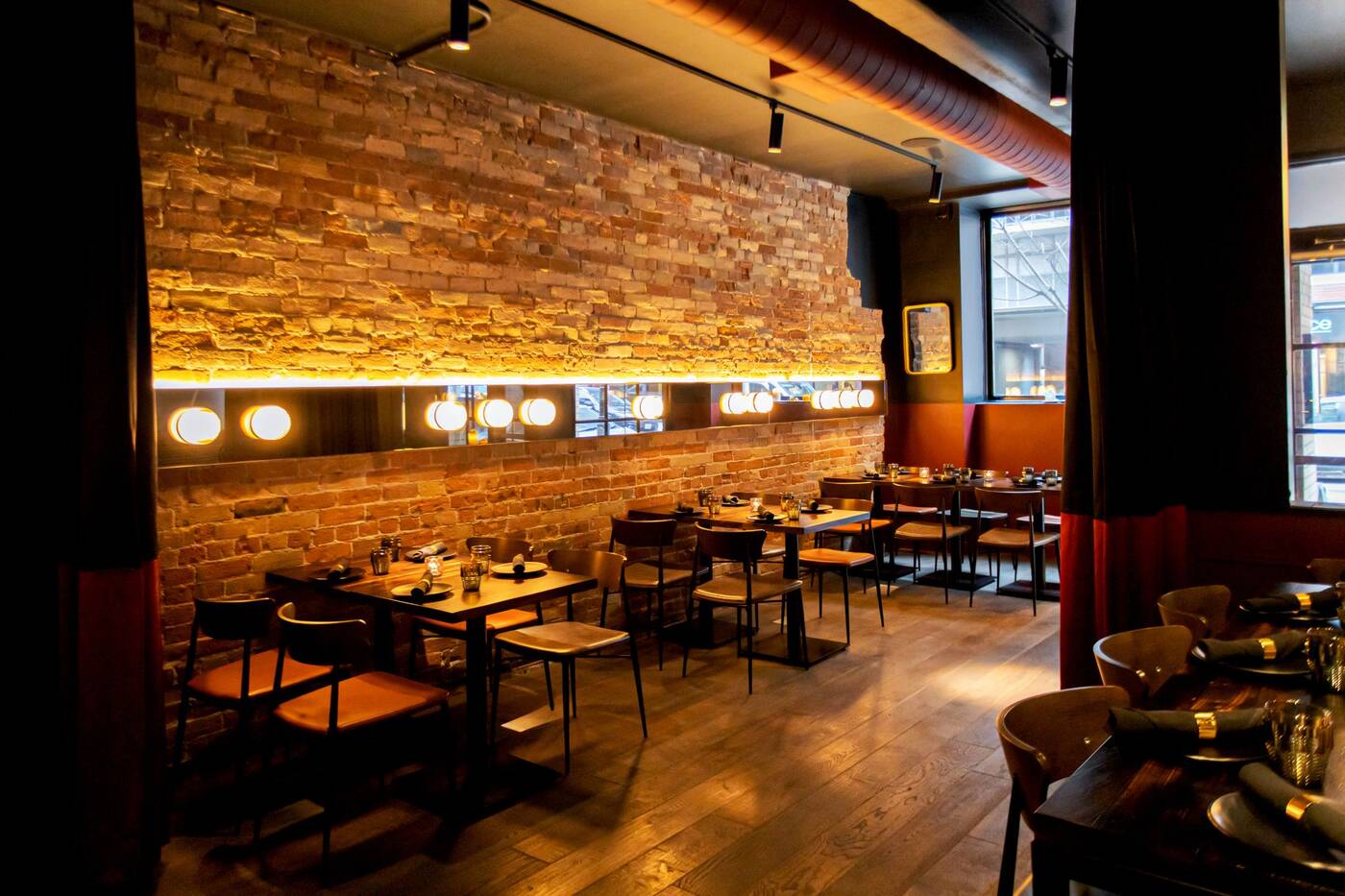 There are two areas on the left side with curtains that can be used to seat private parties for more than 20 people. 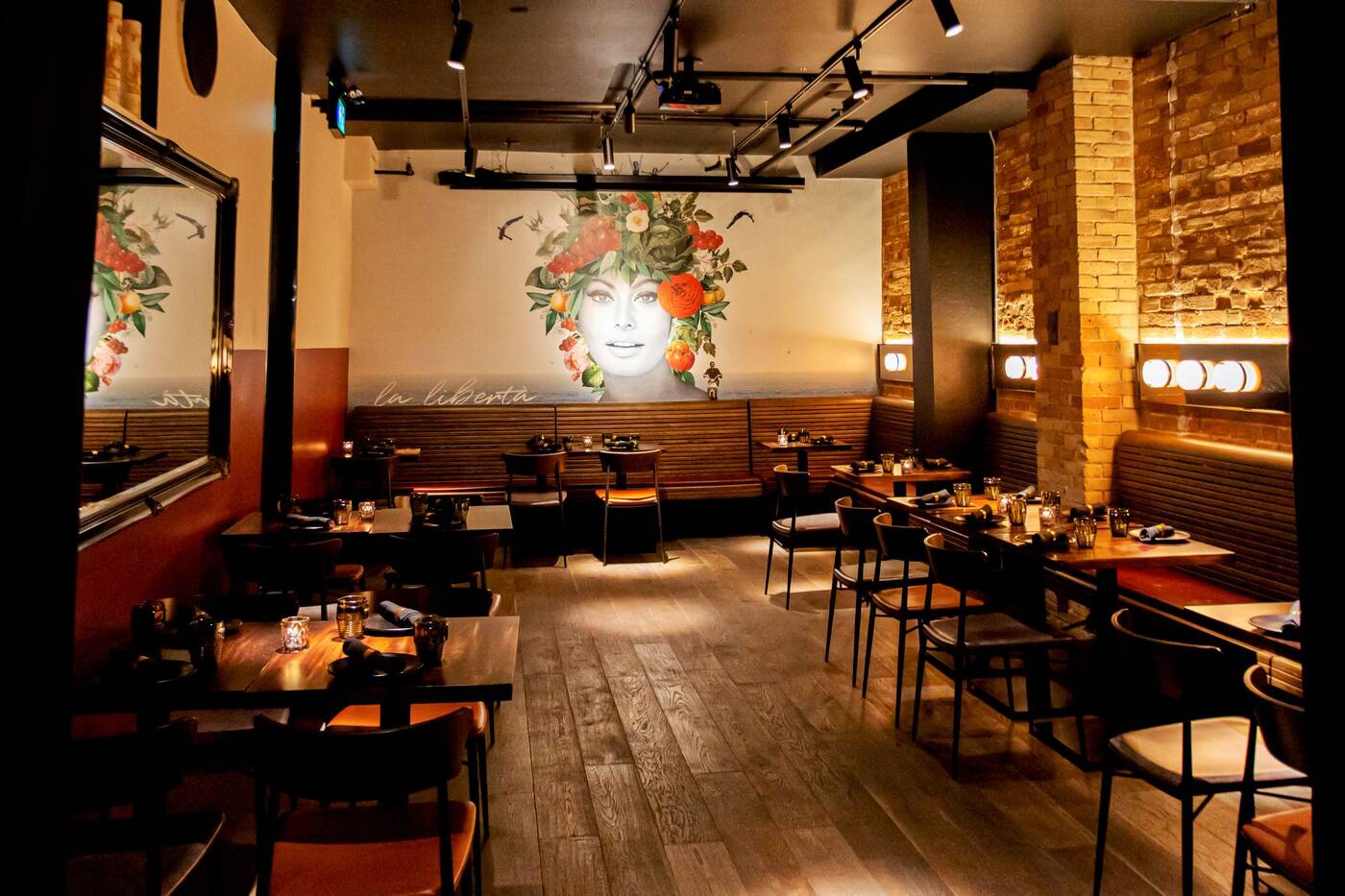 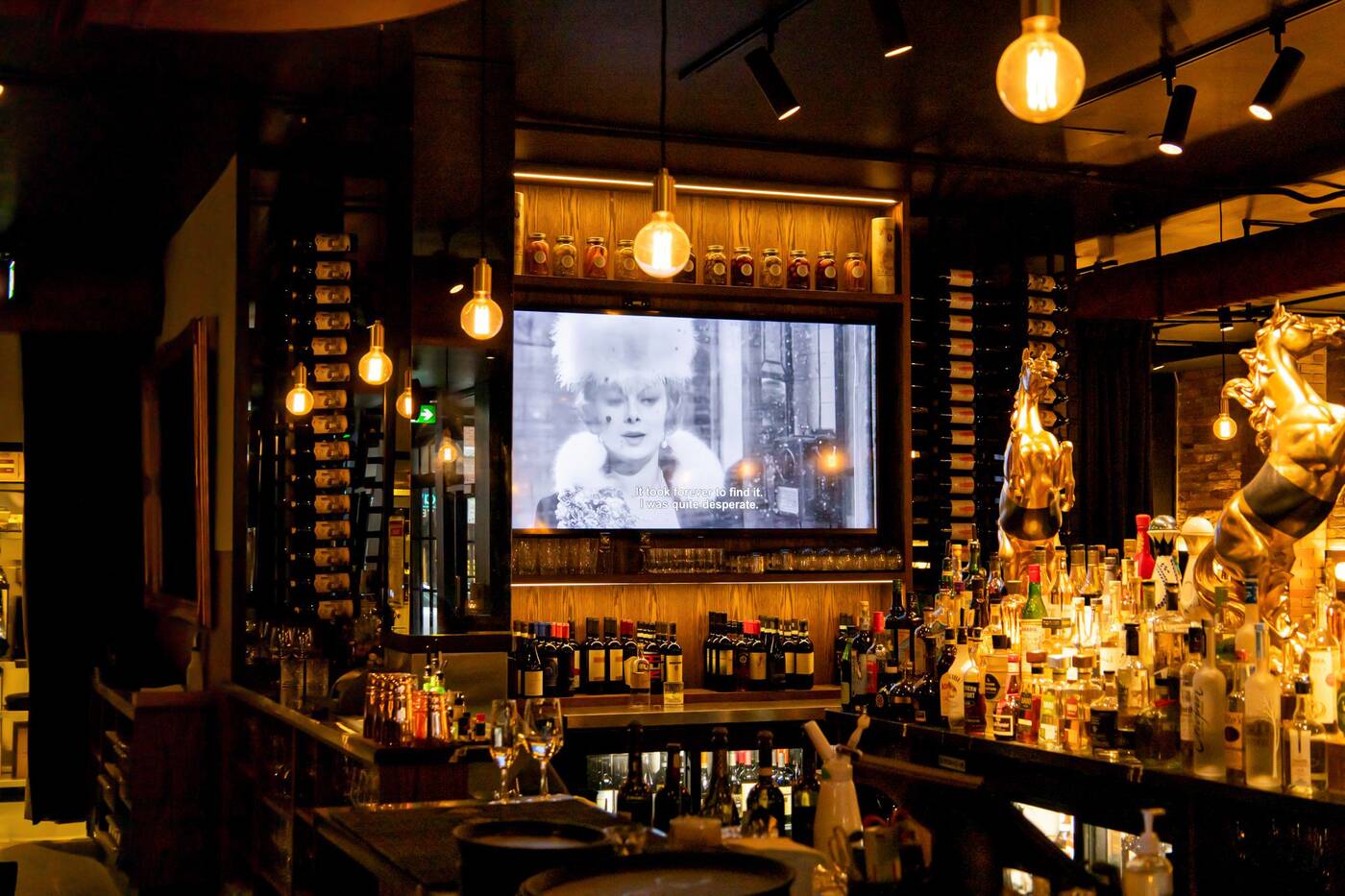 The ambience and menu items at Amano are versatile, they can serve the likes of a fancy date night to birthday celebrations or a company party. 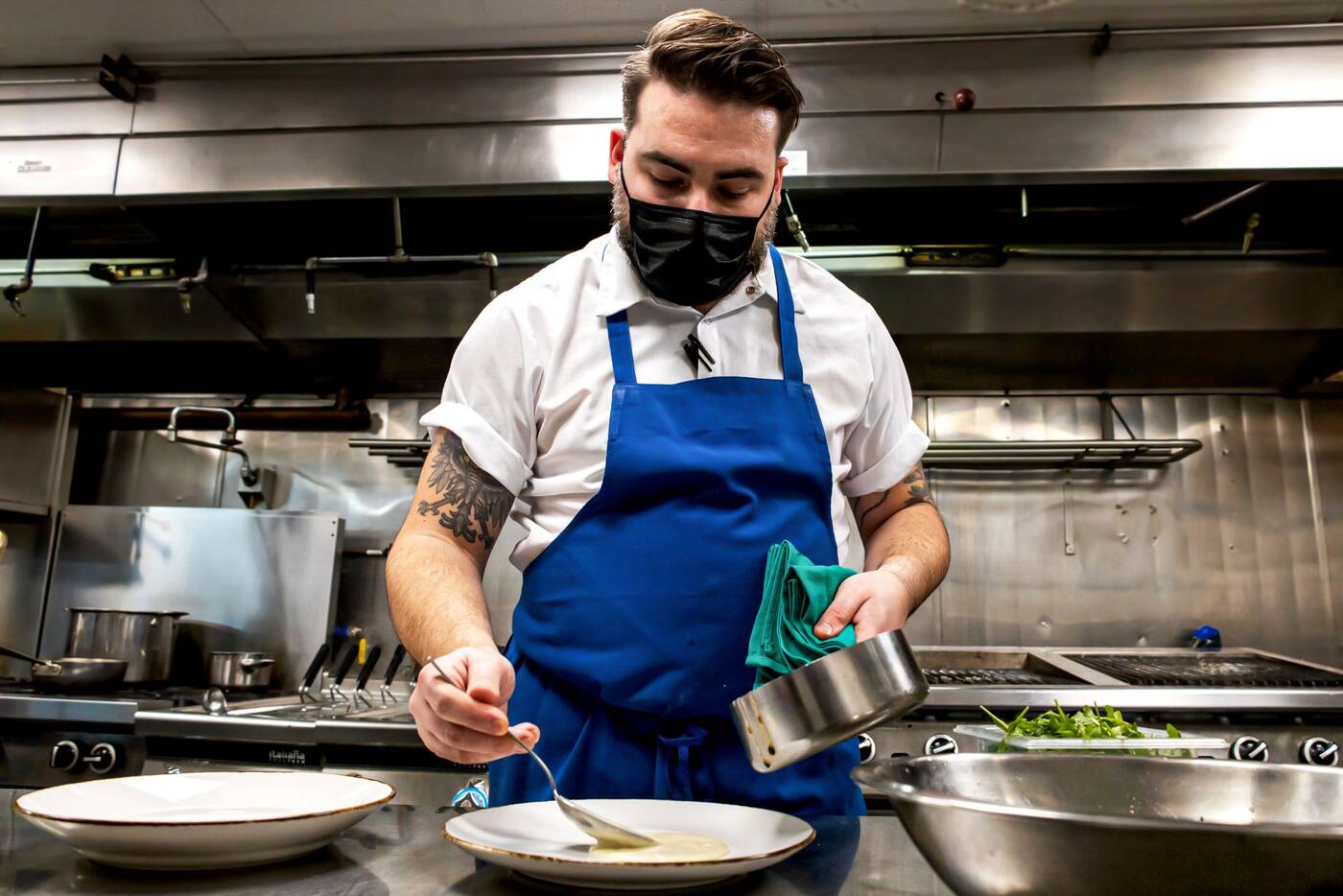 Angeloni says he focuses on using local ingredients as much as he can in the food at Amano, a method learned while he was travelling through Italy. 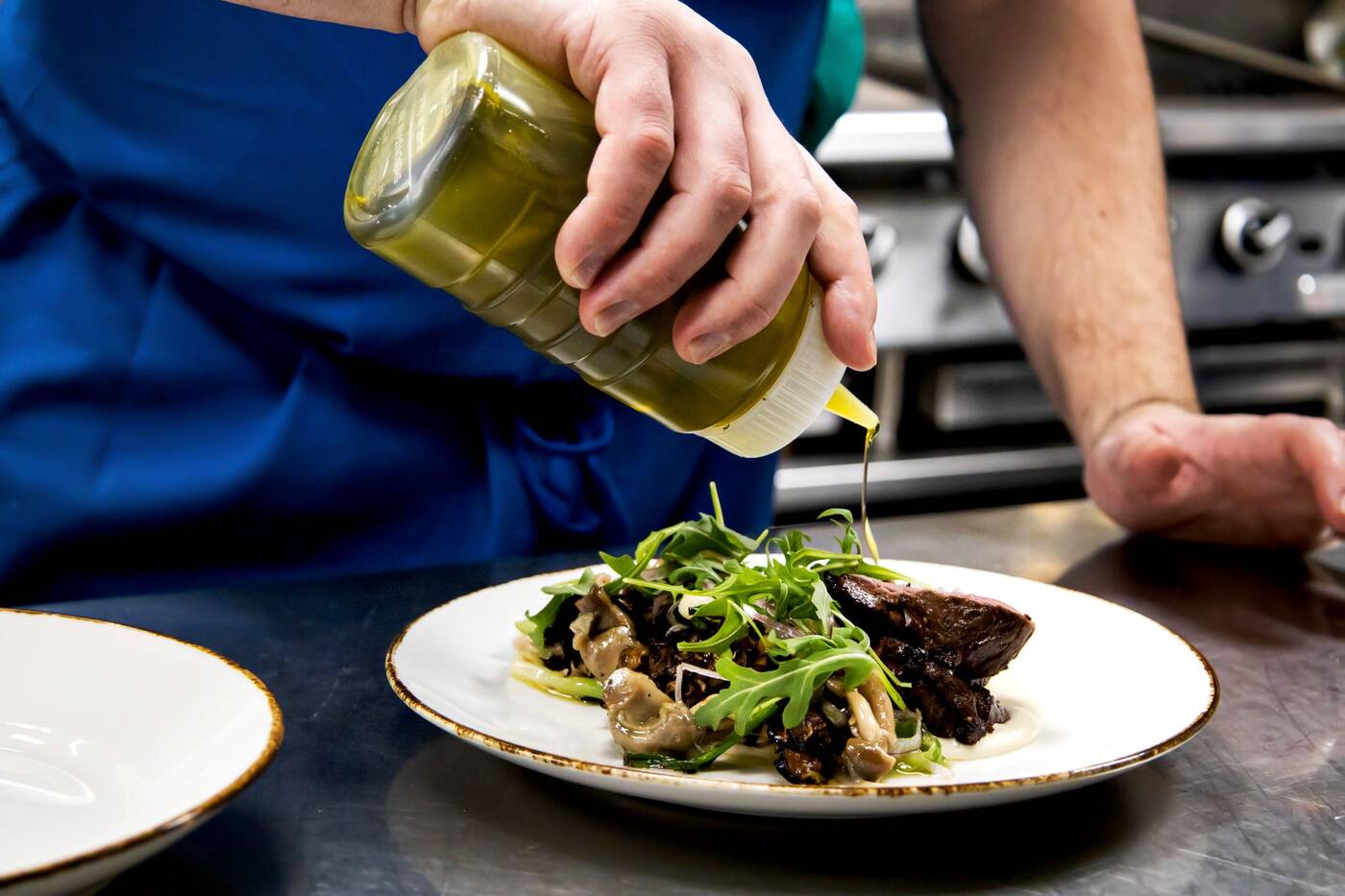 Salads are used with root vegetables that are natural to Canada's current climate, like rutabaga or parsnips. The pork used for some dishes on the menu are sourced from a farmer in Linton, Ont. 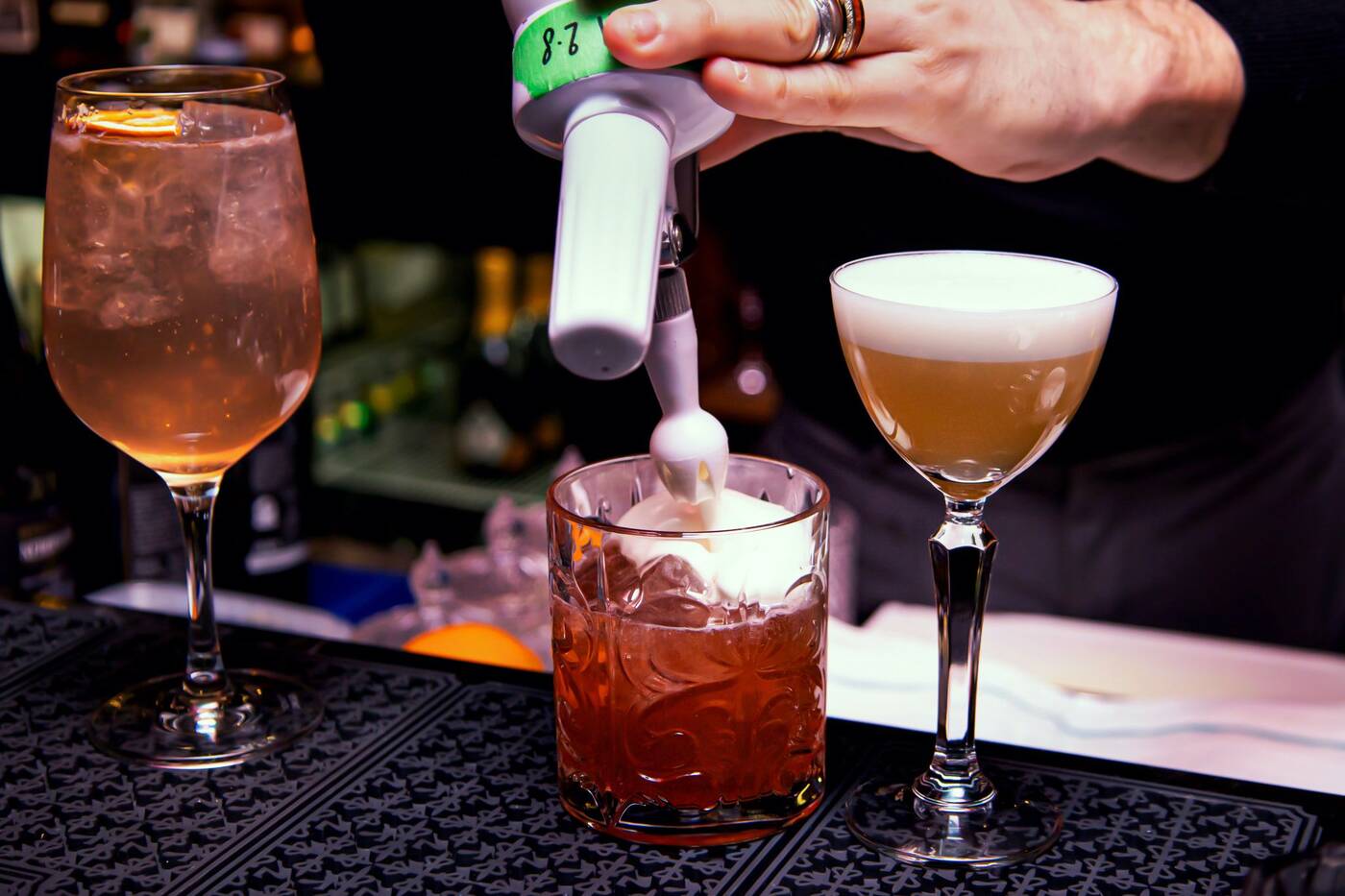 The chef says the best way to experience the food here is by sharing, whether that's just a few snack plates or larger mains with cocktails. 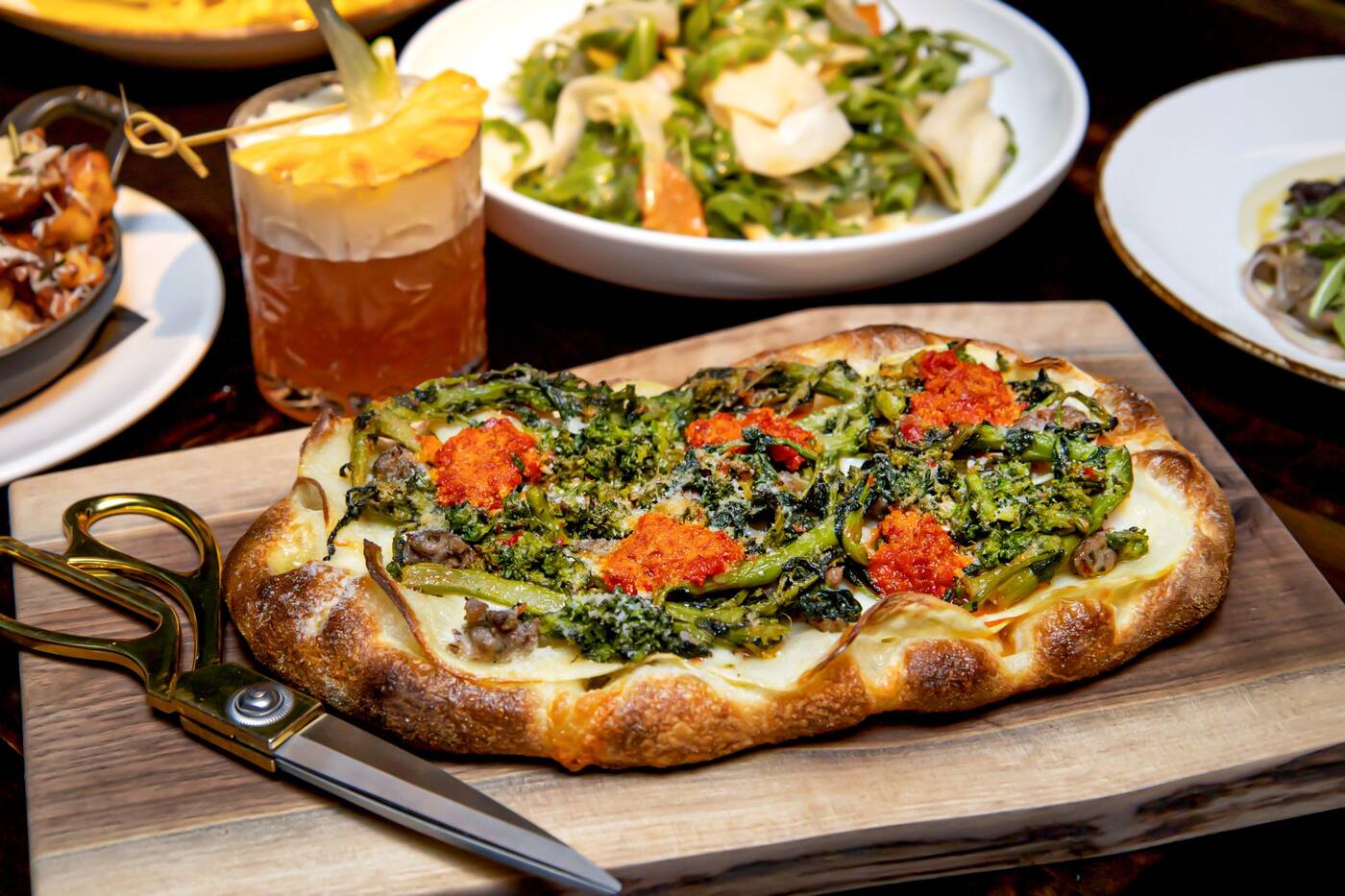 The menu is organized into six sections that include Italian tapas, fresh salads, main courses with meat or fish, and of course dessert.

The other two are the pasta and pinsa, not pizza. Pinsa is a style of roman dough-making which creates an air bubbled crisp all along the base of the pie that leads up to a thick crust. 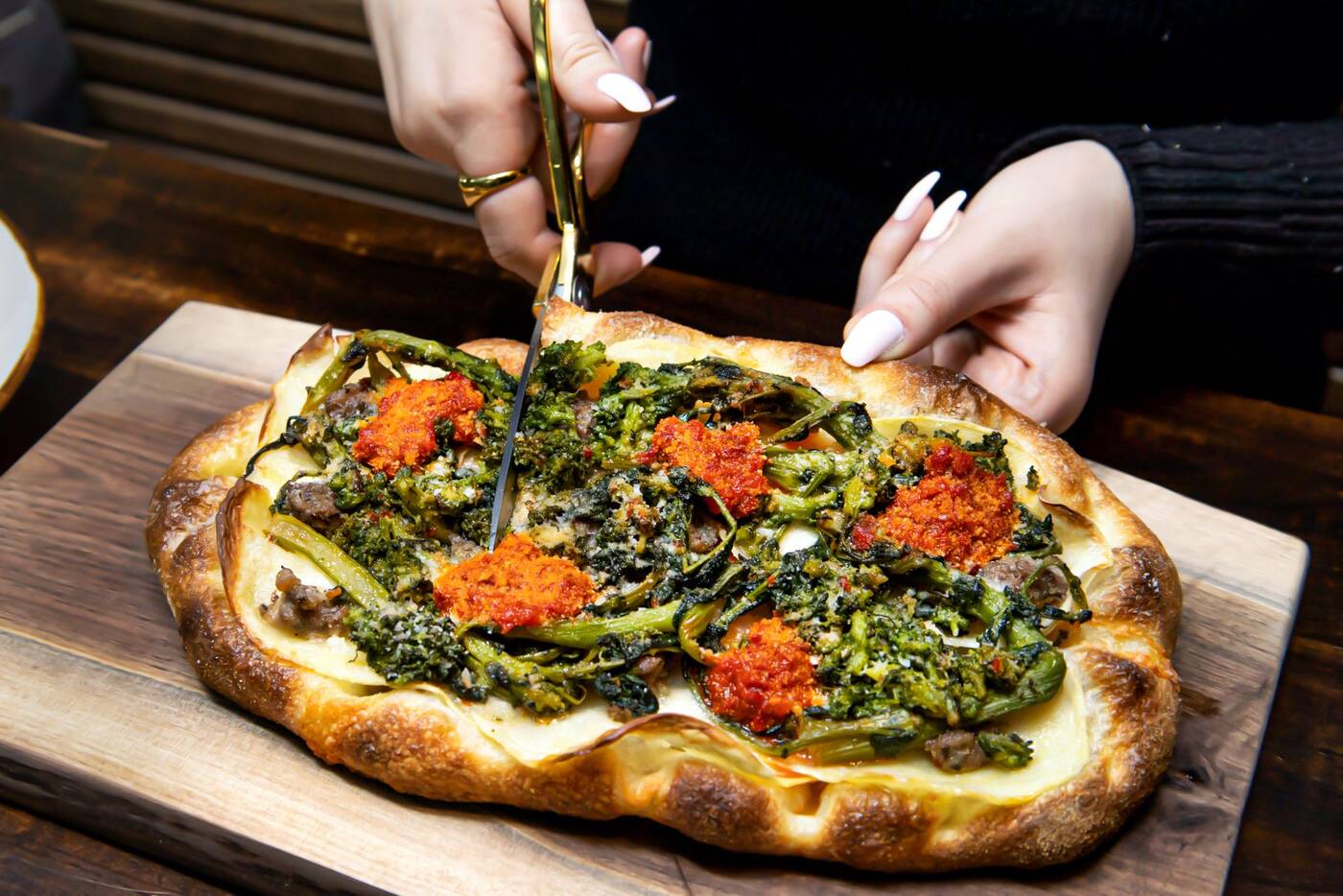 The Meaty Greens pinsa ($22.00) tastes similar to how it sounds. Pecorino Italian cheese covers the base along with garlic rapini and sweet sausage bits. Tomato portions sit on the very top of this pie, in reverse to what you'd find on a basic pizza. 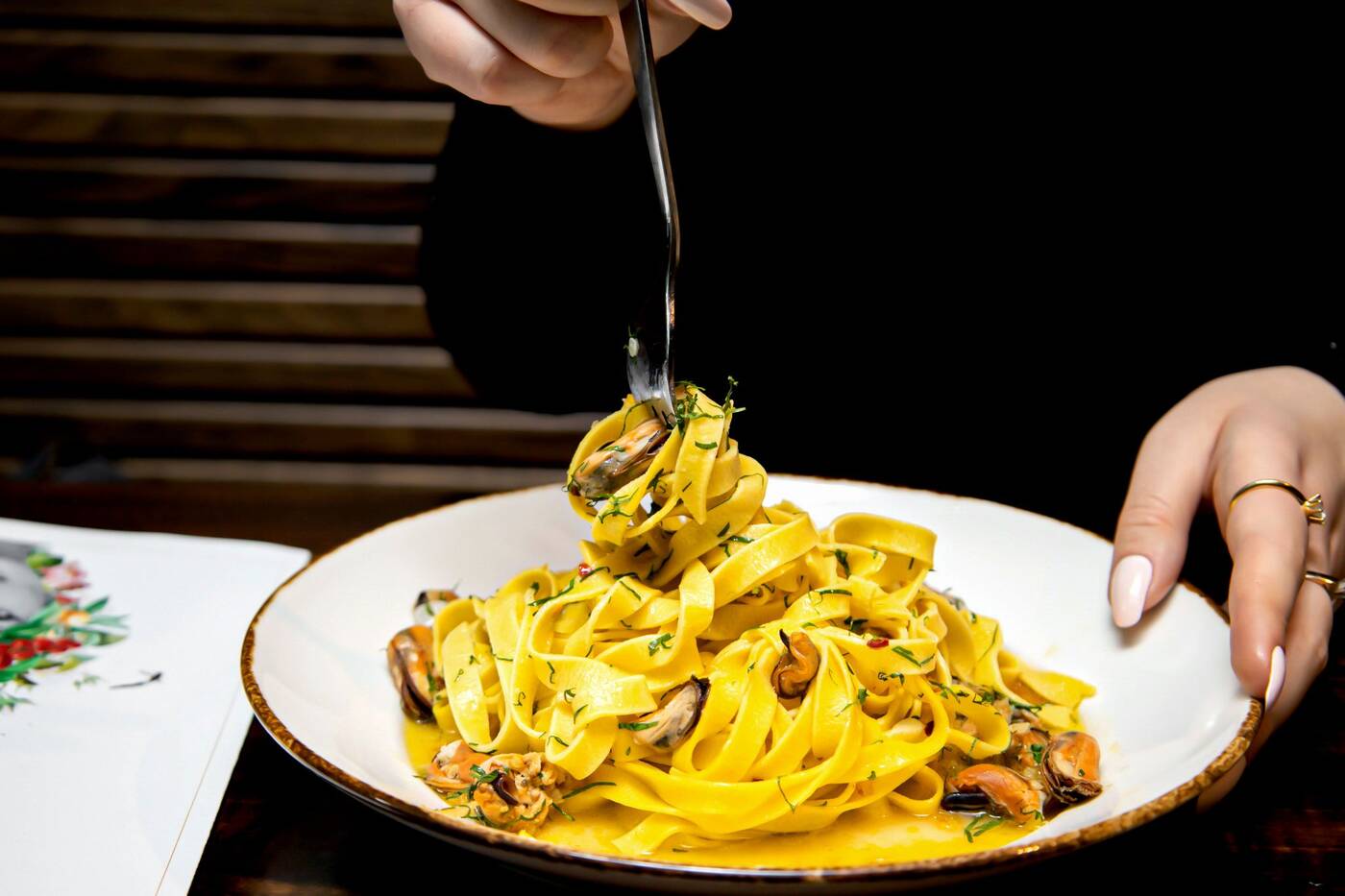 Twirl to your heart's content with this made-from-scratch Tagliolini ($24.00) pasta. The noodles are soaked in a saucy bath of white wine, chili, garlic, and parsley. An ample amount of PEI Mussels are thrown into the mix that compliment the strings of soft pasta. 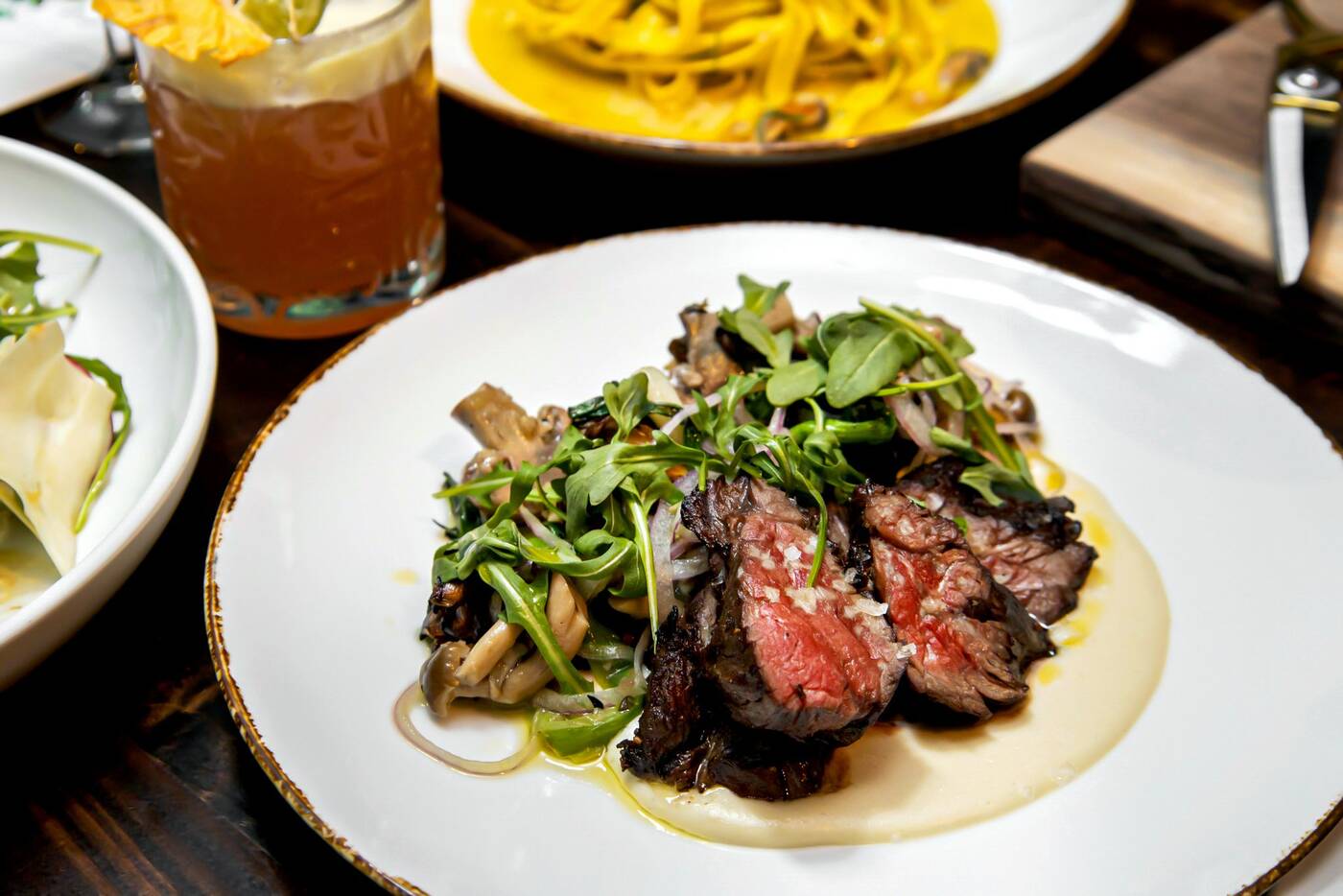 The Hanger Steak ( $36.00) is one of five options for mains at Amano Trattoria. Four medium-rare pieces of meat are placed on a bed of creamy onion sauce that melts in your mouth. This is paired with a mix of arugula, salsa verde, grilled onions and hen of the woods mushrooms on the side. 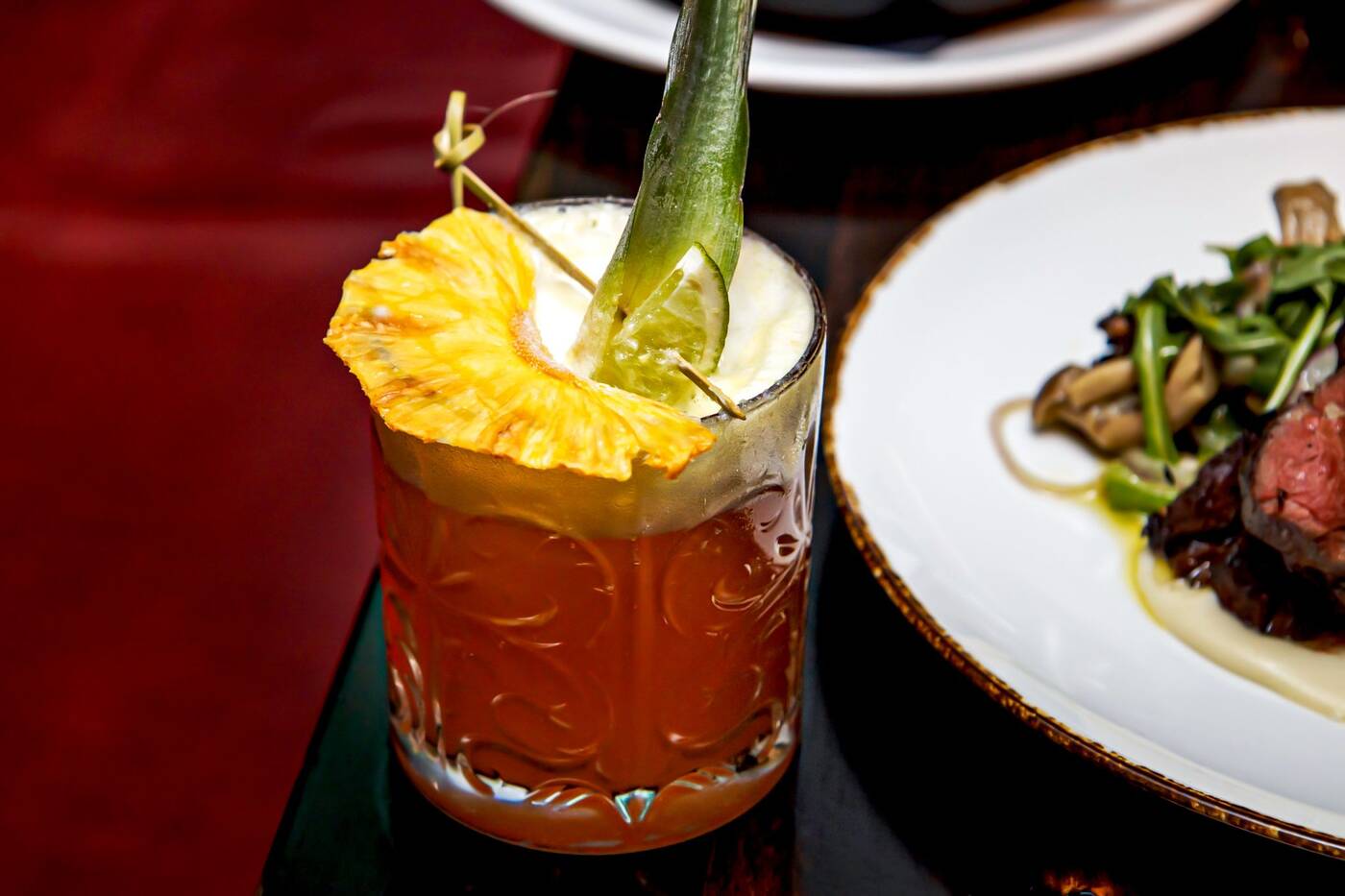 If you're looking for a cocktail to pair with a dish, order the Jungle Bird ($15.00). Sailor Jerry spiced rum is the base for this drink along with Select Aperitivio which adds a stunning tropical pink colour to the glass.

With each sip, you'll taste the pineapple foam that sits on top, a unique addition to an otherwise average rum cocktail. 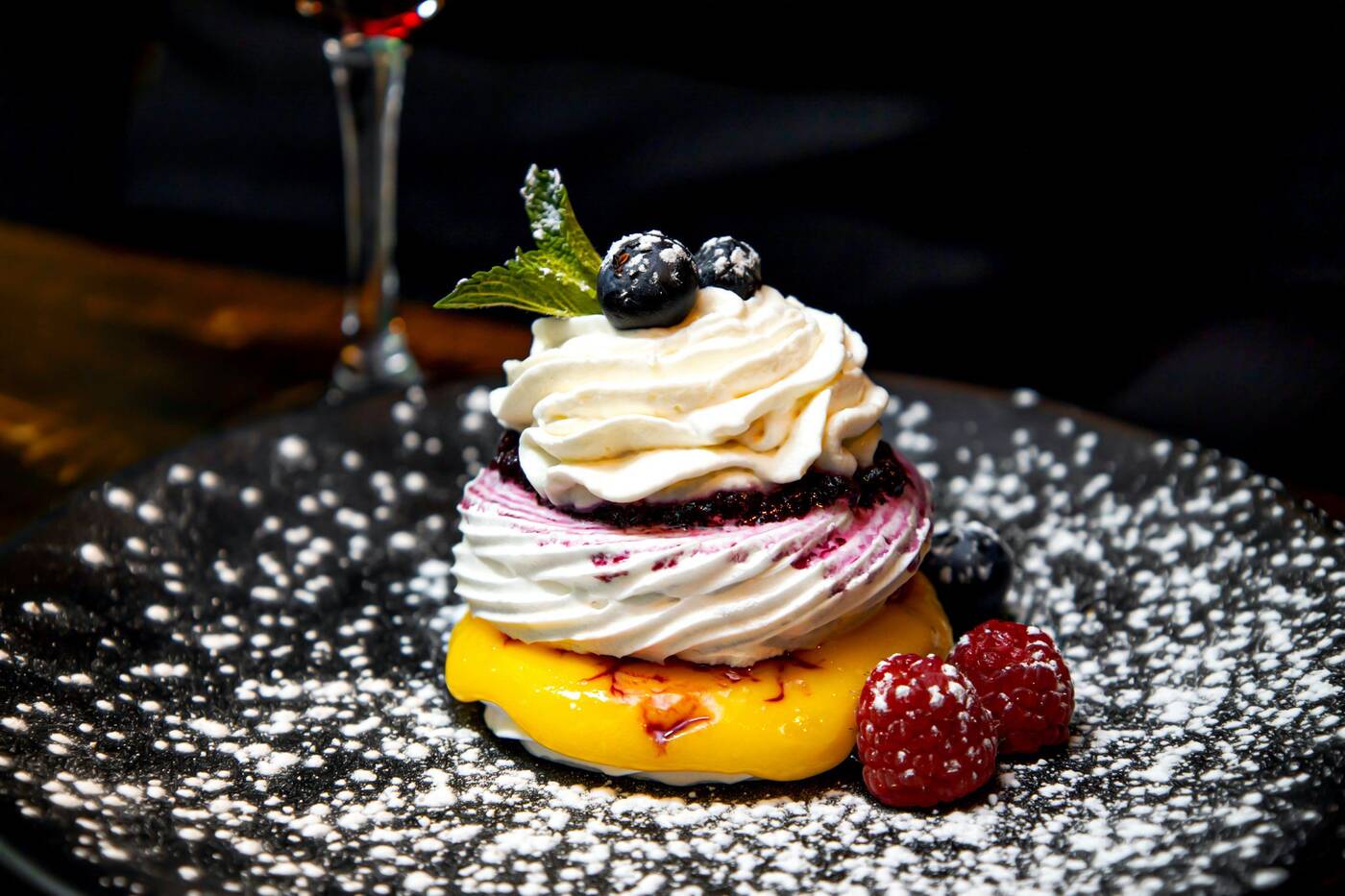 If you still have room for dessert, I'd recommend the Pavlova ($10.00), for splitting between two.

A cookie sits on the base, then layers of lemon curd, Chantilly cream, and blueberry compote tower this small, yet mighty dish. Freshly sweet in taste, it pairs nicely with the berry garnishes. 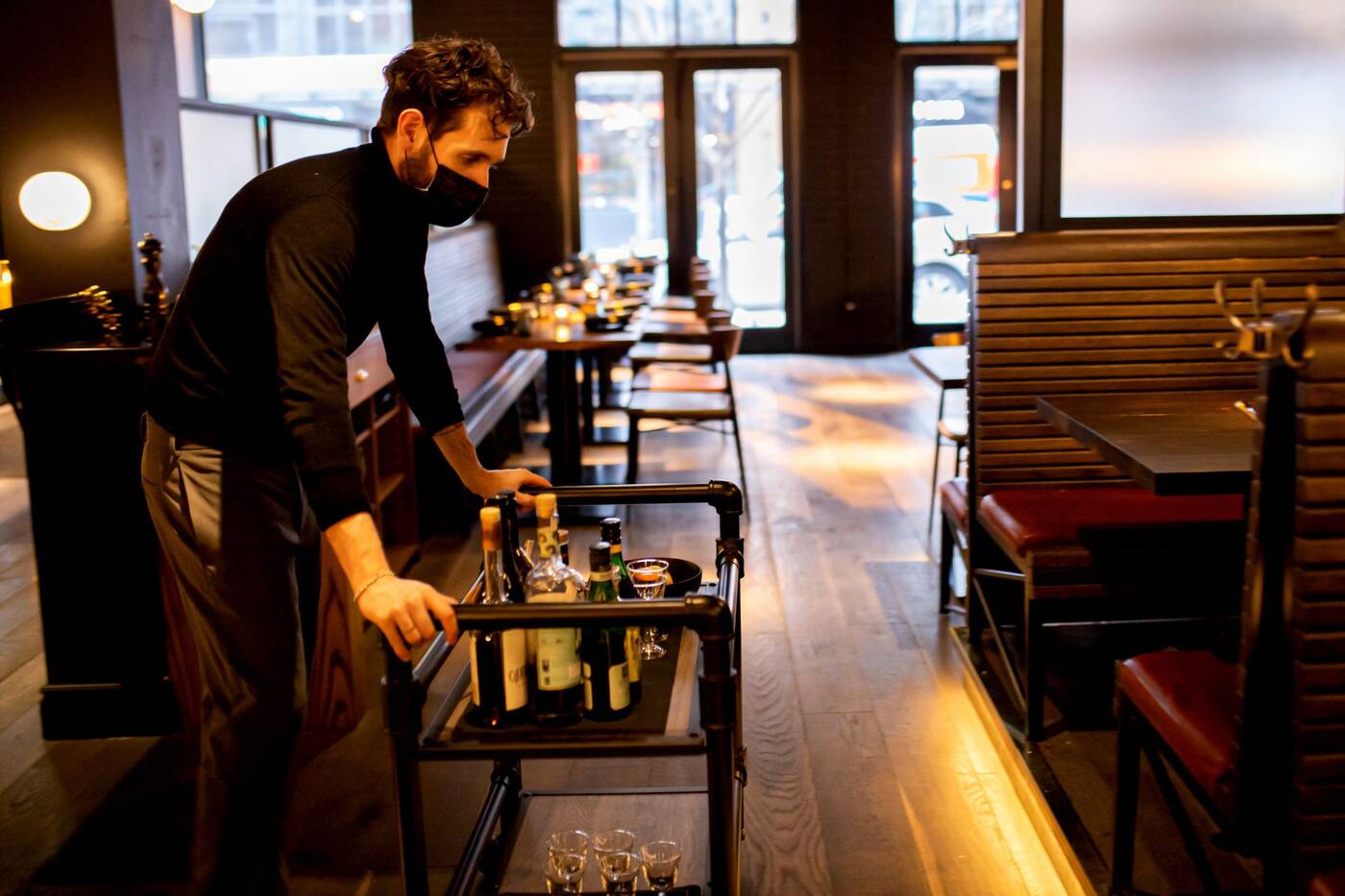 If you thought that was the end of your dining experience at Amano, there's one more step to the night that acts as an ode to a post-meal Italian tradition.

A alcohol cart filled with several types of Amaro is rolled over to your table when you're done eating. 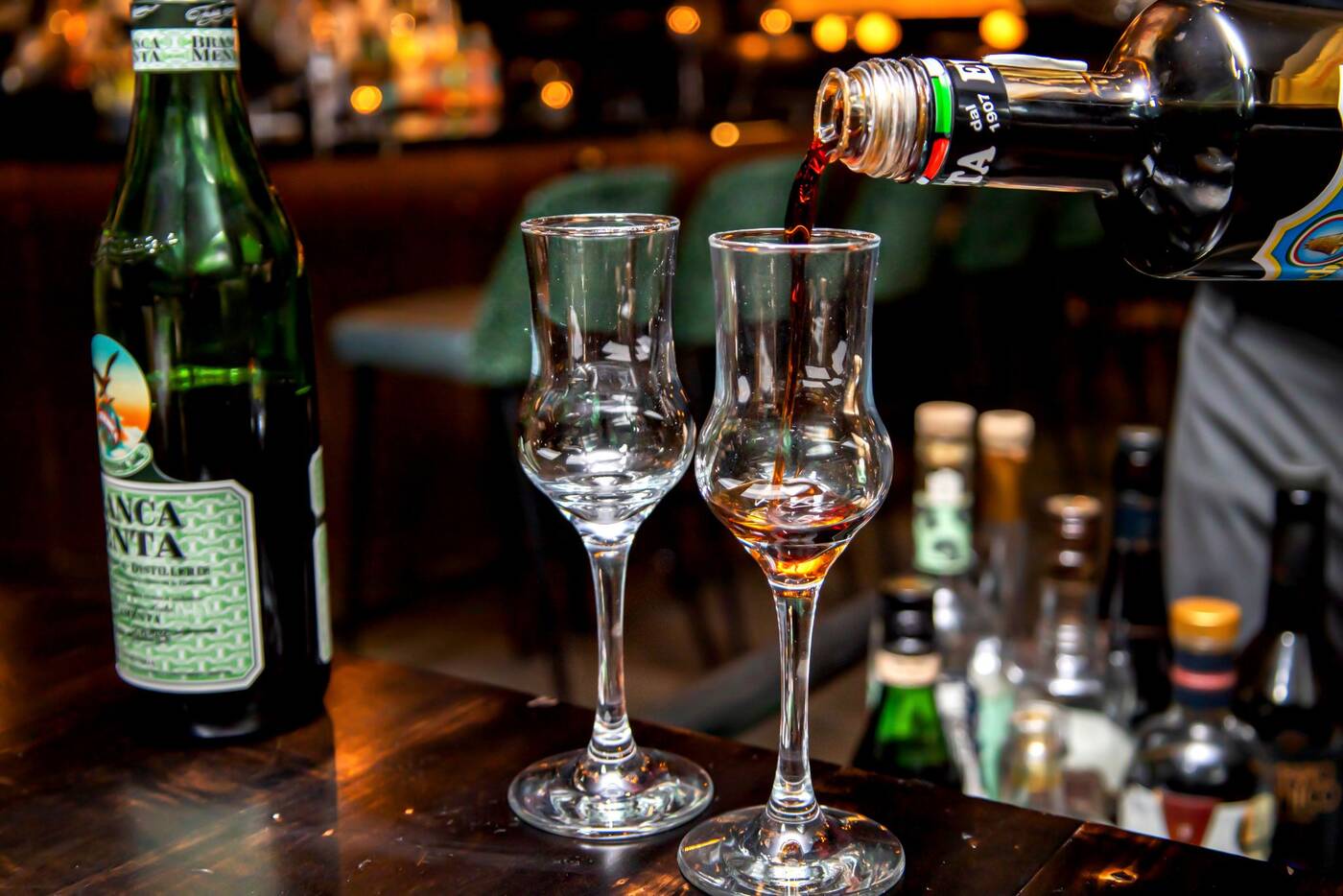 Amaro is an Italian herbal liquor that is meant to boost metabolism after a heavy meal. A small serving is given to you in dainty glasses which you can sip from, ranging in different notes from extremely bitter to pleasantly mint.

Menta Fernet ($8.0o) is sure to cleanse your palate but also freshen your breath, so you don't feel too overstuffed after eating through Amano's six courses. 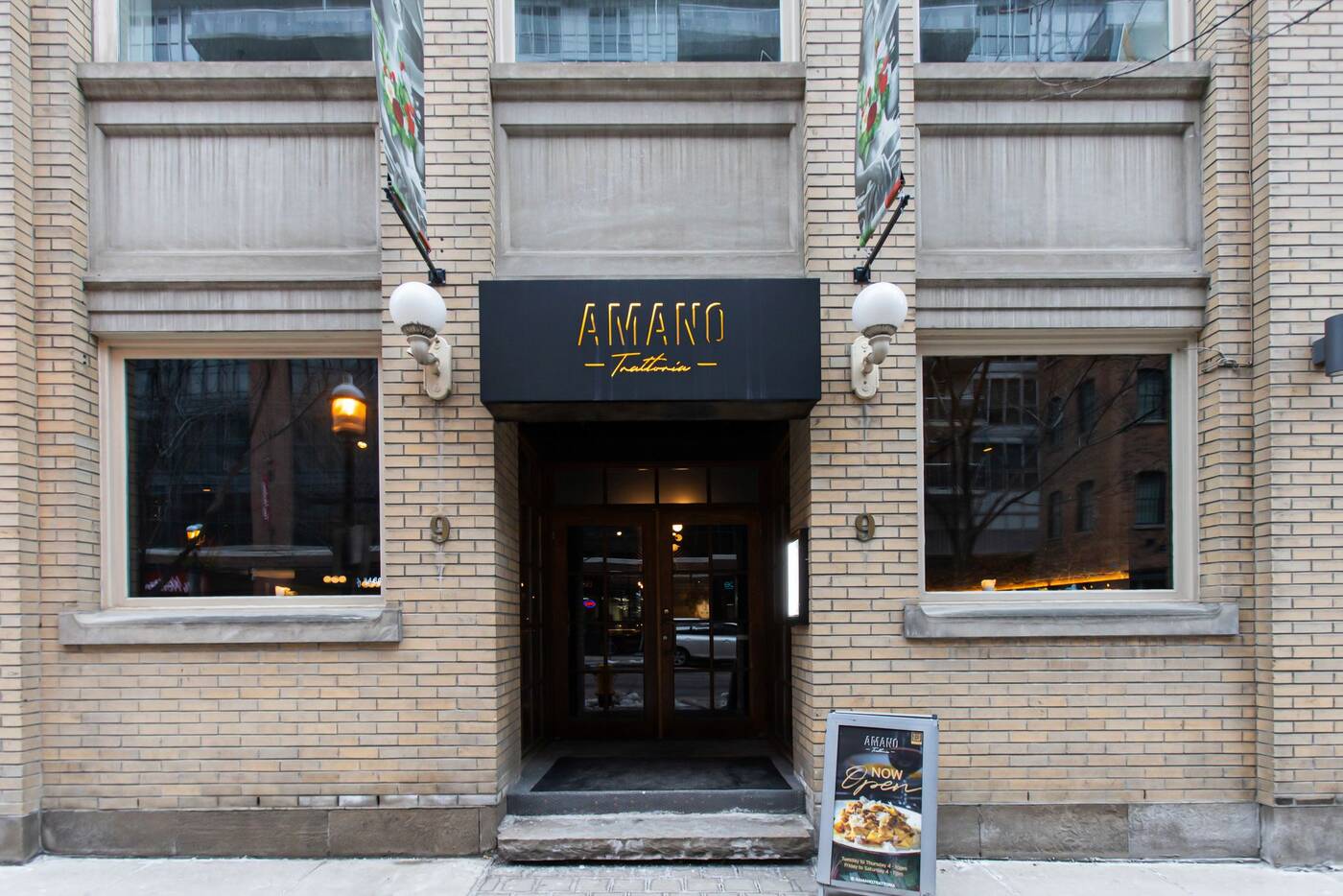 Look for the flags on the building of Amano showing faces of Italian figures like Sophia Loren and Frank Sinatra above the glamorous entrance to the restaurant.