Buffets can be scary, depending on the restaurant. I usually opt for ordering from the menu because of this, but a friend recommended the one at Agra Fine Indian Cuisine so I decided to investigate. Their lunch buffet is offered seven days a week, 11:30am - 3pm, and for $9.95, you can choose from over 40 items including meat and vegetarian dishes. 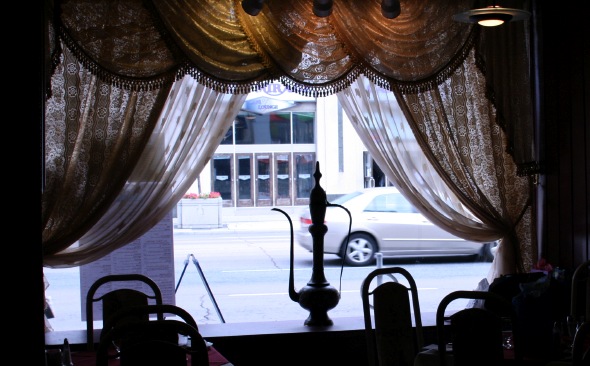 Agra's gotten mixed reviews in Chowhound , but my experience was positive. I always go for the butter chicken and theirs was yummy; the meat tender and juicy. Their Tandoori chicken was also good; too often I find the Tandoori chicken in buffets to be dry and overcooked. We arrived shortly after the buffet opened, which probably helped.

If you're not a buffet person, you can also order from the regular menu; there's a version available on the restaurant's Web site . Entrees range from $9.95 for the Reshmi Kabob (minced chicken marinated in fresh ginger, onion, and spices threaded onto skewers and grilled in a tandoori oven) up to $15.95 for their Jumbo Prawn Masala (big prawns sauteed with ginger, garlic, onions and thick curry sauce). 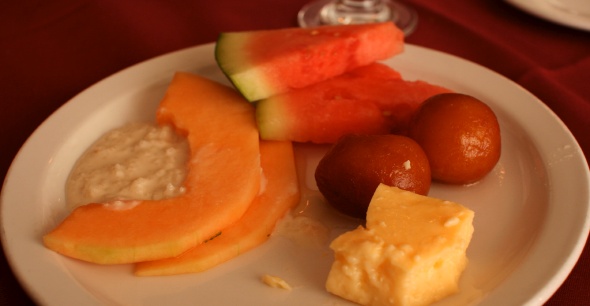 I sampled their dessert buffet (see above). I've never been a fan of those round pastry things...way too sweet even for me. But the fruit is fresh and I came for the entrees, not dessert. Next time, however, I may try ordering a dessert from the menu instead: the Kulfi sounds intriguing, described as "Indian ice cream made with creamy sweetened milk and frozen in tight moulds." Or maybe it was in the buffet and I just didn't see it.

Apparently the restaurant was named at the city of Agra, the home of the Taj Mahal. The chef (Chef Deb) started his career in Montreal's Bombay Palace but then moved to Toronto's Bombay Palace, where he worked as Chief Chef for 10 years. He also worked at Little India Restaurant on Queen Street and was featured on CityTV's Breakfast Television a while back.

Located near the intersection of Yonge and Sheppard, the restaurant is convenient for anyone seeing a movie at the Sheppard Grande, which is right across the street. 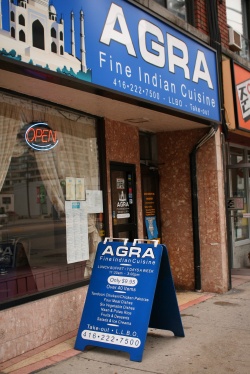