News that Ontario landlords would be able to raise rents by as much as 2.5 per cent per year had tenants outraged earlier in 2022, but residents of one Toronto building have it much worse, and are now facing double-digit rent increases.

One resident, who prefers to be identified by just his first name, Matt, tells blogTO, "I live in a new purpose-built rental owned by RioCan at Christie and Dupont. They have recently sent out lease renewals, and are increasing rent by 13.4 per cent and are not open to negotiation."

Matt shared a photo of a document from management offering him the choice to renew his lease in November for a full year with an eight per cent rent increase to $2,424.60 per month, or a month-to-month rate of $2,546 — a full 13.4 per cent higher than his current rent. 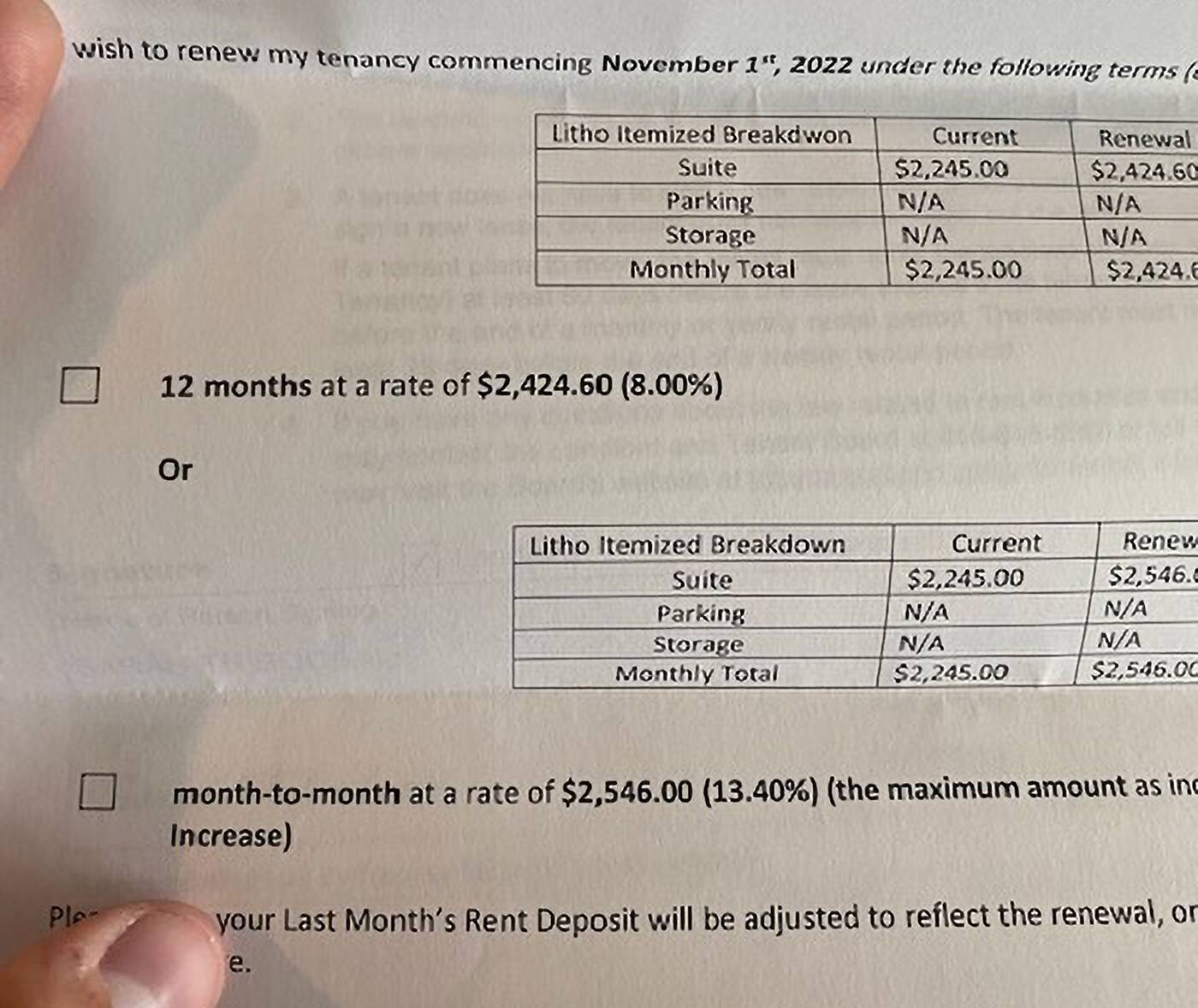 Matt says that while he knew there was no rent control upon signing his lease, he "never expected to face an increase 10 times the size of a rent-controlled building."

"I tried negotiating a slightly lower increase for three months to have time to find a more affordable living arrangement, but each time management at RioCan declined. That's the problem with these large corporations as landlords, there is no compassion and they only care about the bottom line."

"I don't know how this is sustainable. If they keep increasing rents this much every year, a one-bedroom apartment in Toronto is going to cost over $4,000/month in less than five years. Everyone I've spoken to on my floor is moving out due to the increases."

Another resident reached out with a similar story, calling the massive rent increases "a legal loophole, as we are not covered by Residential Tenancies Act."

A representative of RioCan Living tells blogTO that "Litho is one of a select group of [our] properties in Toronto that opened at the height of the Covid-19 pandemic, and as such, the property was leasing units at rates lower than market rents."

"The combined impact of Covid-19 and inflation have necessitated rate adjustments to better reflect current market conditions. All leases at the property remain at or below market."

While the rates asked by RioCan are much higher than Ontario's 2022 rent increase guideline of 1.2 per cent per year, or 2023's 2.5 per cent annually, this provincial limitation does not apply to newer rental units occupied for the first time after November 15, 2018.

The takeaway for renters here is that, while a new building may offer classy amenities and a great overall resident experience, if it was first-occupied after that 2018 date, you might end up having the rug pulled out from under your feet when the rent skyrockets.