Even Toronto's heritage towers are now subject to condo-fication, with a new proposal seeking to transform the Canadian Pacific Building at the southeast corner of Yonge and King by adding a modern addition above and to the rear of the landmark Edwardian-style proto-skyscraper.

The development application, submitted on behalf of property owners H&R; REIT, calls for some pretty substantial changes to the early 20th-century office tower at 69 Yonge Street.

A full restoration of the tower is proposed as part of a sweeping condo conversion, along with a 20-storey addition rising from the southeast corner of the site and adding five new levels atop the heritage skyscraper.

With heritage elements led by ERA Architects, the project would rehabilitate the building's original features, including the replacement of all windows and restoration of the historic Canadian Pacific Railway signage in metal lettering over the currently visible imprint.

Architecture and design studio Partisans — known for their surreal designs, including the stunning interior at Bar Raval — was announced as the design lead when the project's existence first came to light in late 2021.

In the time since, the scope of the project has expanded to include a substantial addition, also designed by Partisans. 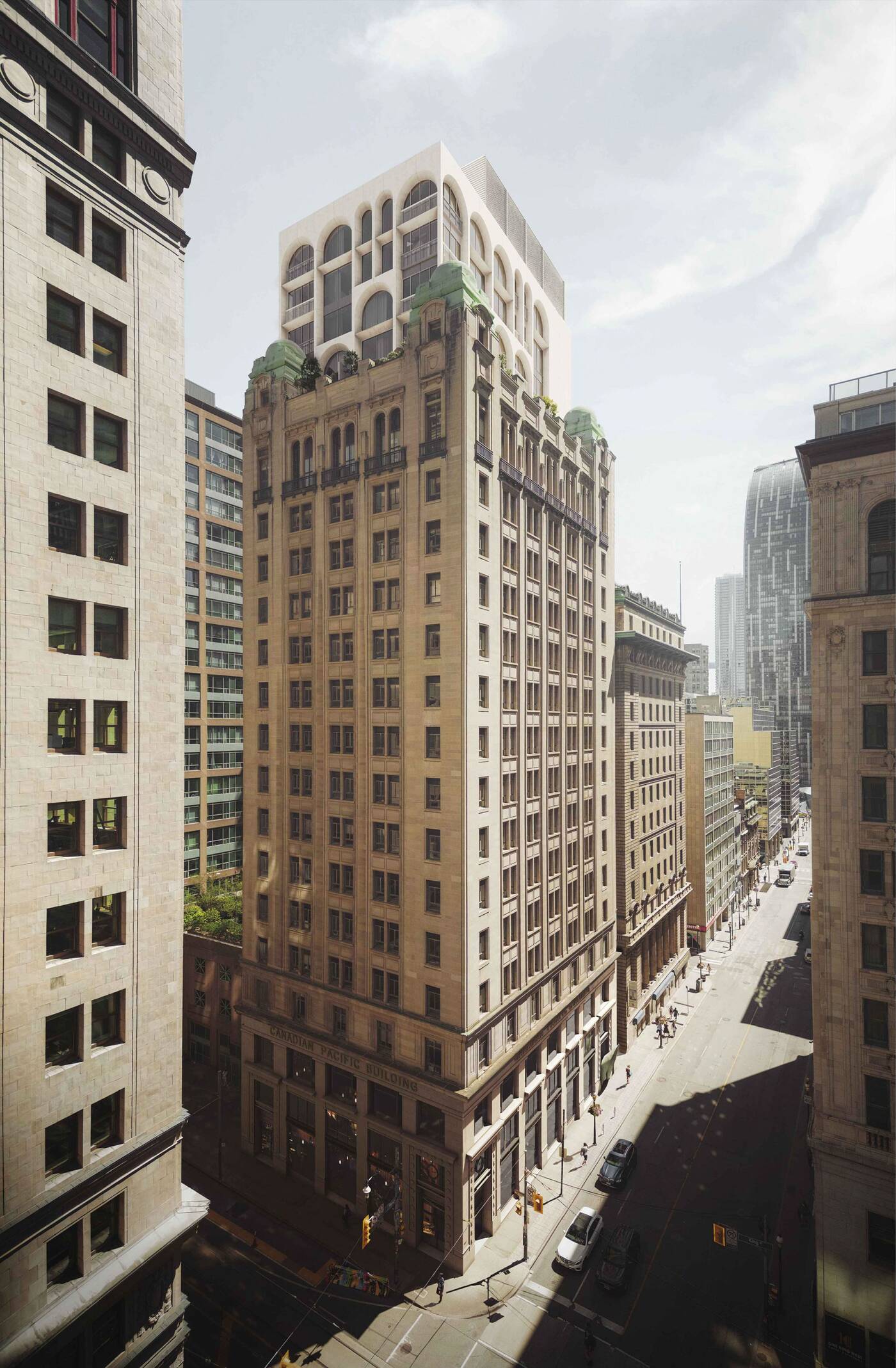 Partisans co-founder Alex Josephson tells blogTO that the firm worked closely with ERA "to help us achieve what I think is our most mature but also very elegant proposal to date."

"We were interested in how we could work creatively with the classical orders embodied by 69's original architecture, in a contemporary design context." 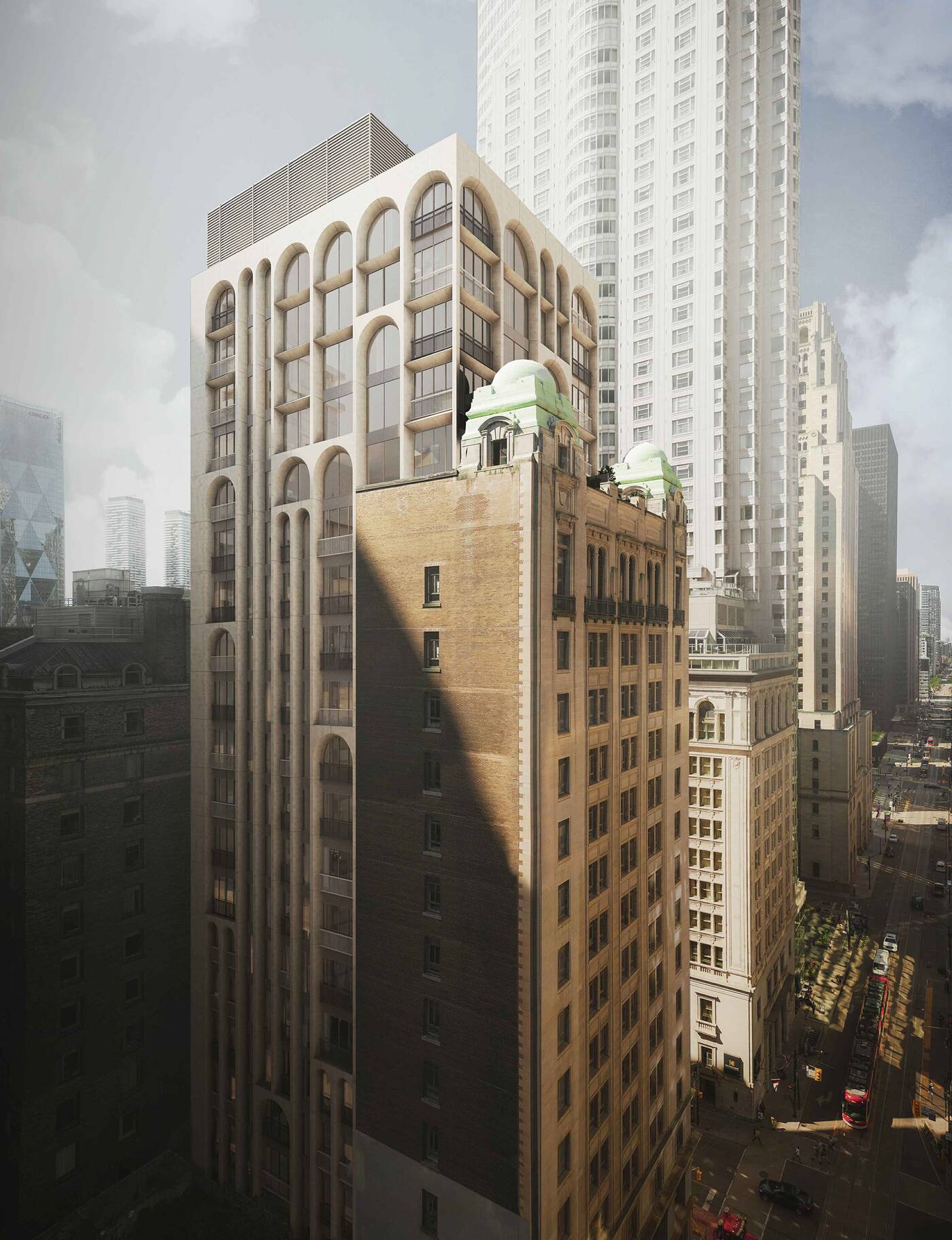 The combined heritage tower and addition would measure just over 12,928 square metres, including over 1,361 square metres of commercial area and roughly 11,567 square metres of residential area through new floor space and converted office floors.

The commercial component includes the current Shoppers Drug Mart location that operates on the ground floor, with plans for the store to remain open throughout the restoration. Below the Shoppers, the proposal aims to add a new 371.5 square metre restaurant within a basement level.

Within the residential space, a total of 127 condominium units are proposed in a mix of 14 studios, 65 one-bedrooms, 27 two-bedrooms, and 21 three-bedroom units.

Matthew Kingston, Executive VP of Development and Construction at H&R;, tells blogTO that "69 Yonge is a special building that required a unique approach."

"Prior to the pandemic, we were having issues maintaining tenants as well as attracting new ones," says Kingston, attributing the lack of demand to the minimal size of the floorplates and factors like a dearth of parking and outdated mechanical, electrical and IT infrastructure.

"69 Yonge was the tallest building in the British Empire when it was completed in 1914 and for over 100 years it has been used as an office, but the aforementioned issues caused us to question whether its current use would be viable for another 100 years."

"Having said that, we also felt very strongly that a building this important and beautiful needed to be retained, improved and upgraded as a part of our work. The result is a boutique, heritage collection homes that respect and highlight the historical aspects of the building while also adding a striking and complementary addition."