A colossal office, residential and transportation development will soon animate the east bank of Toronto's Don River. The East Harbour project from developer Cadillac Fairview (CF) will transform 38 acres of industrial land and is one of several controversial transit-oriented communities in the cards for sites along future transit lines.

Located near the meeting point of the busy Gardiner Expressway and the Don Valley Parkway, the mostly-abandoned Unilever soap factory at 21 Don Roadway — which some preservationists are rallying to save — is set to be torn down and replaced by a community of nine commercial office towers and eight residential towers, new public space, and a multi-modal transit hub.

GO Transit and Ontario Line stations act as the spark that sets off this flurry of development activity and it's gearing up to begin, with a proposed office tower in the works for the northwest portion of the East Harbour site.

The first site within the broader development parcel is planned next to the future East Harbour Transit Hub (EHTH) along a planned southerly extension of Broadview Avenue. 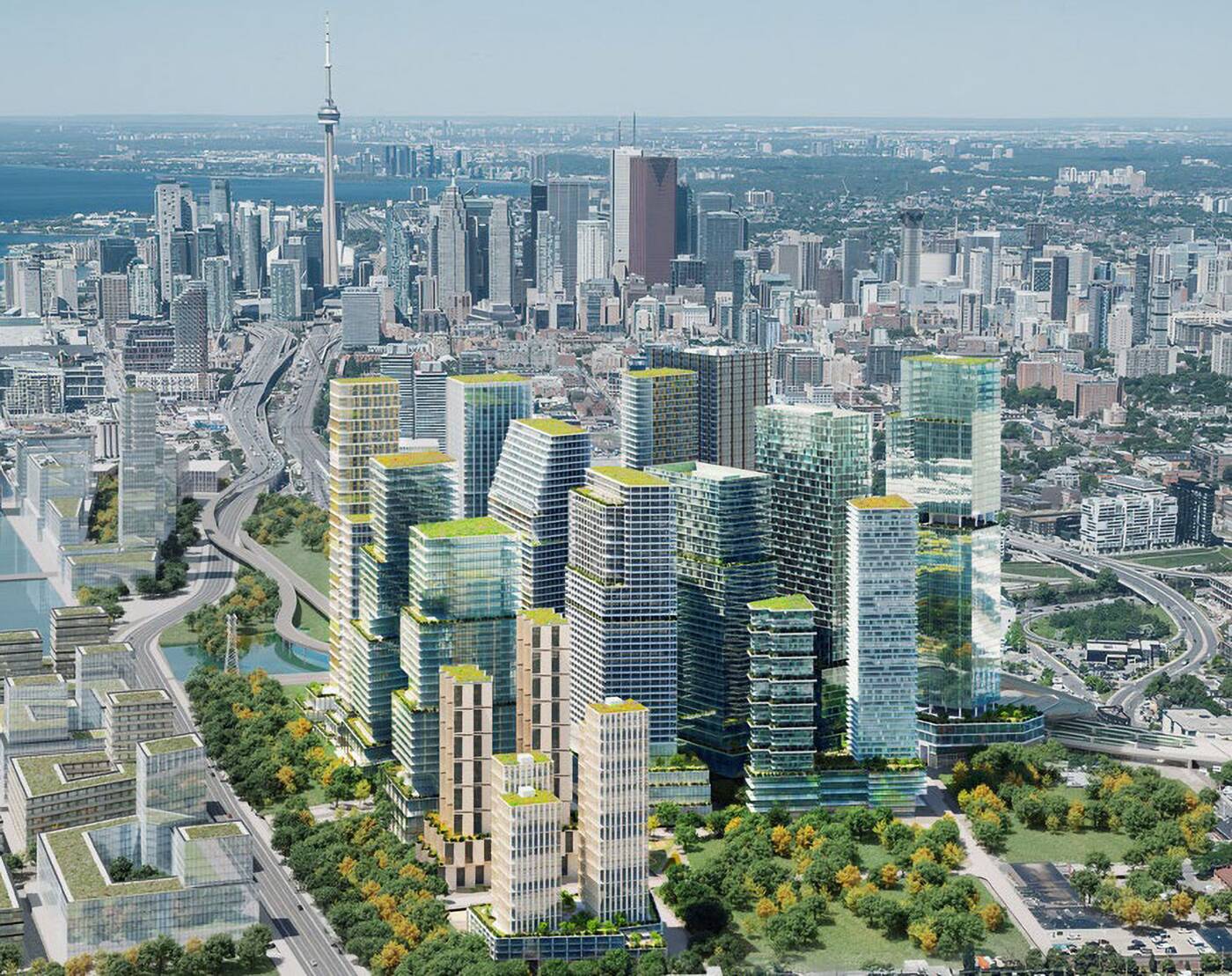 Known in planning documents as Building 1B, the 48-storey (plus mezzanine) office tower would reach a height of almost 218 metres, far taller than anything that currently exists else east of the Don River.

The only taller Toronto tower located outside of the downtown core (or any Canadian downtown) is the 66-storey Eau du Soleil in the Humber Bay Shores area.

Designed by Adamson Associates Architects, the tower features a base with a series of stepbacks and articulations that look somewhere between a game of Tetris and Jenga. 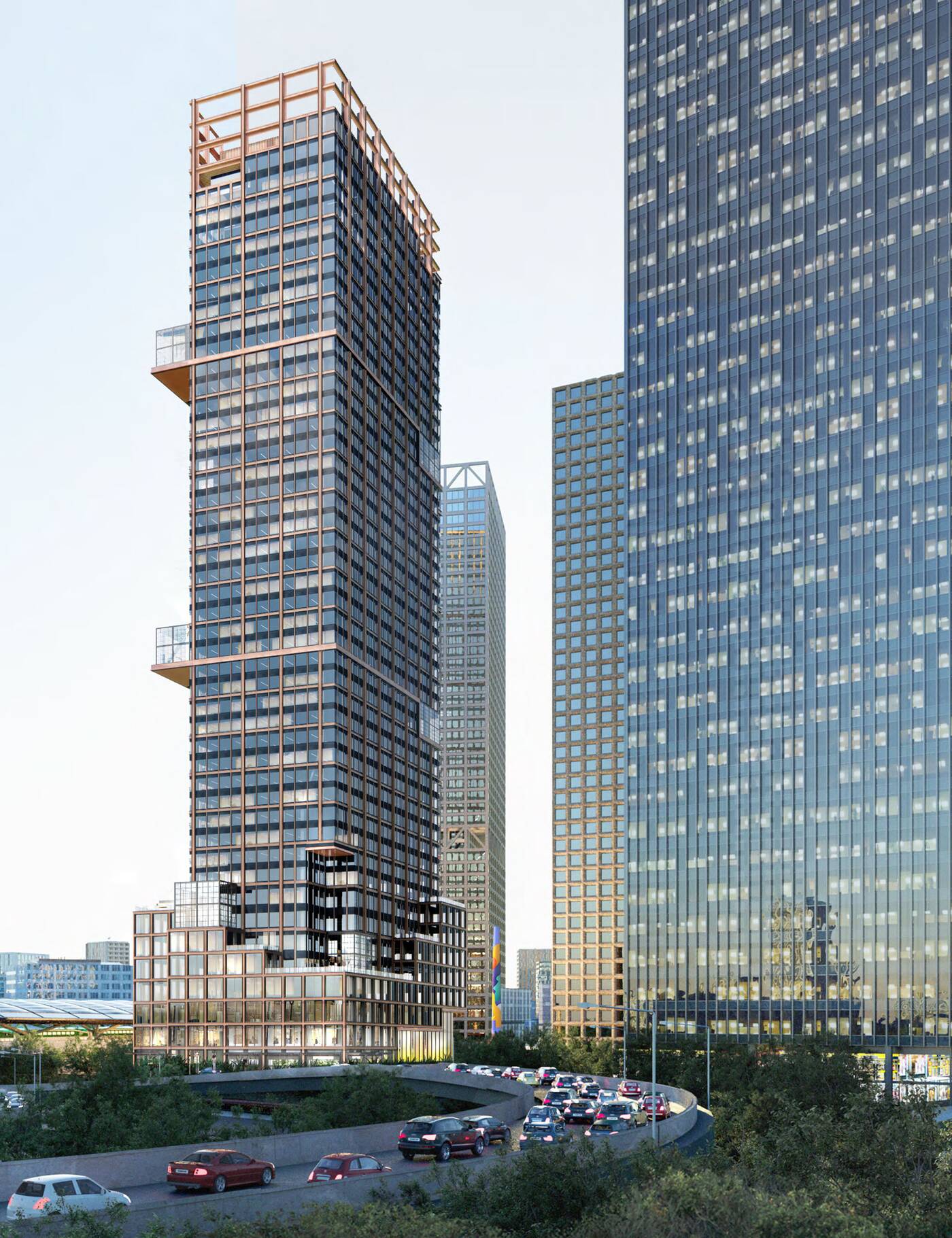 A frame of copper-coloured metal finishes that dissolve with the roofline and projecting balconies for office tenants give this tower design some pop, but not everyone is thrilled with the plan. 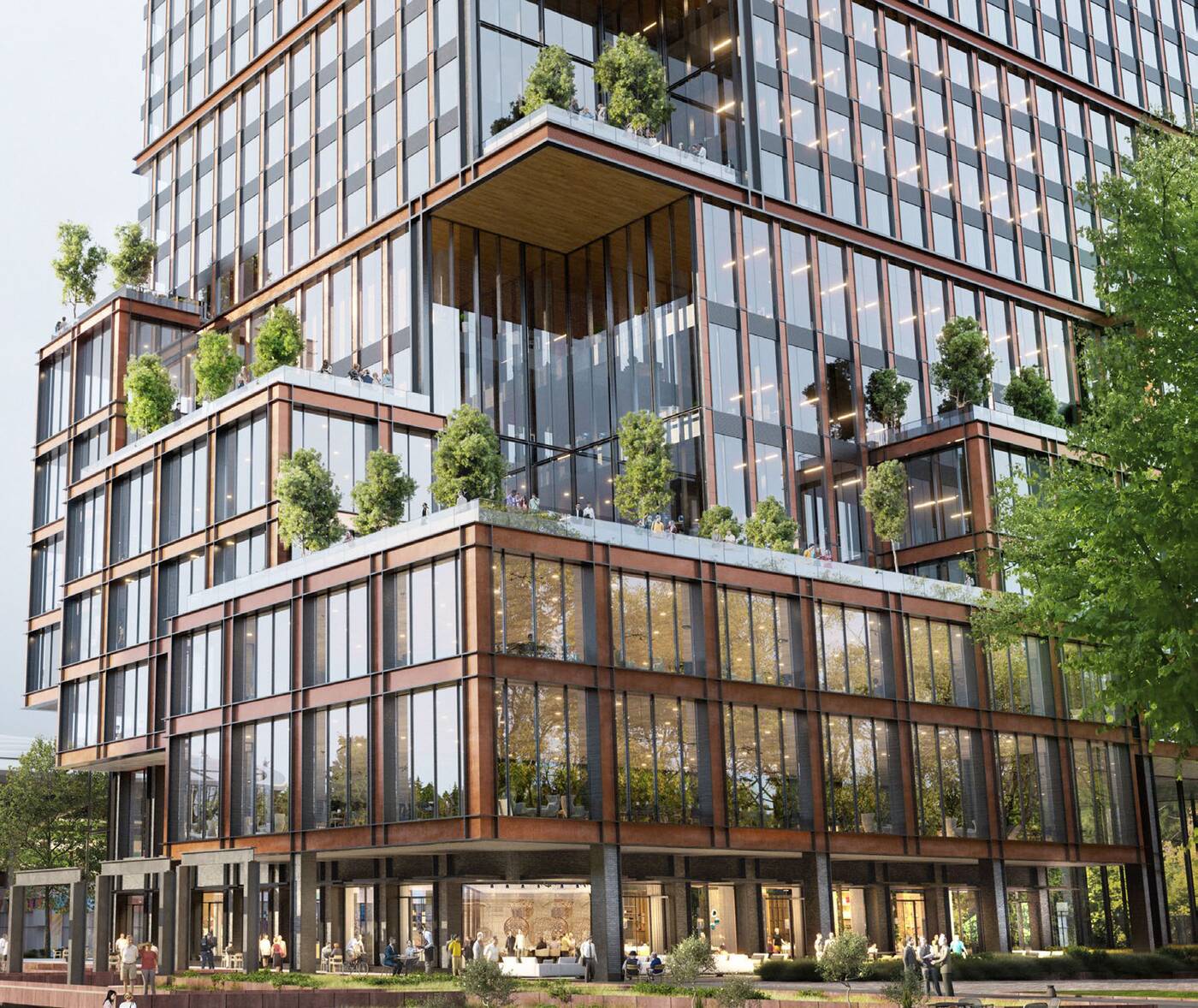 The proposal may have just dropped, but it's already being thoroughly skewered by Globe and Mail architecture critic Alex Bozikovic in a thread of tweets shared Monday morning. 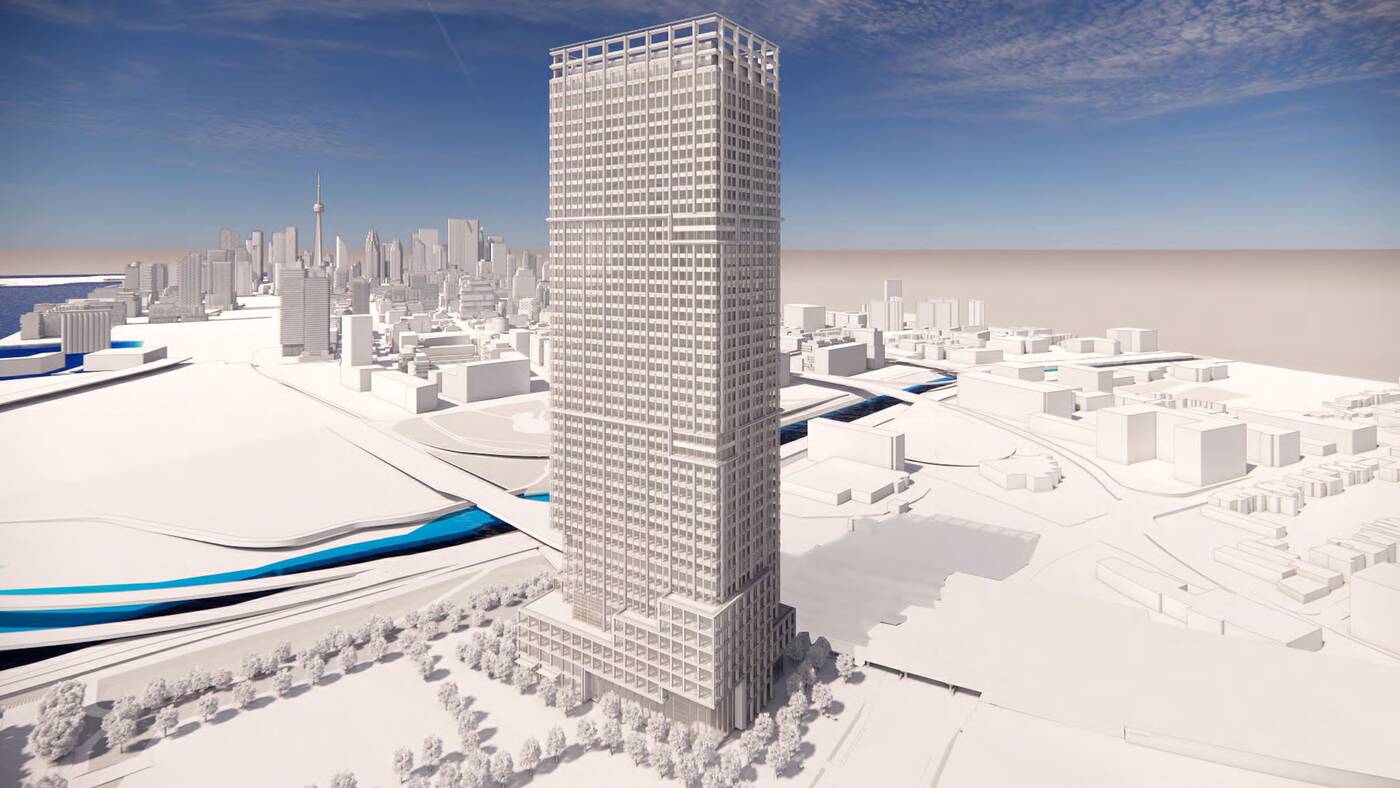 Bozikovic has previously voiced concerns about the project, speaking up against the demolition of the existing Unilever factory and other potential heritage assets on site. Now he's raising alarm bells about the project's urban design, including the infrastructure it is being shaped around.

Public space is a key part of the plan, with public spaces guaranteed through agreements between CF, the Province and the City. 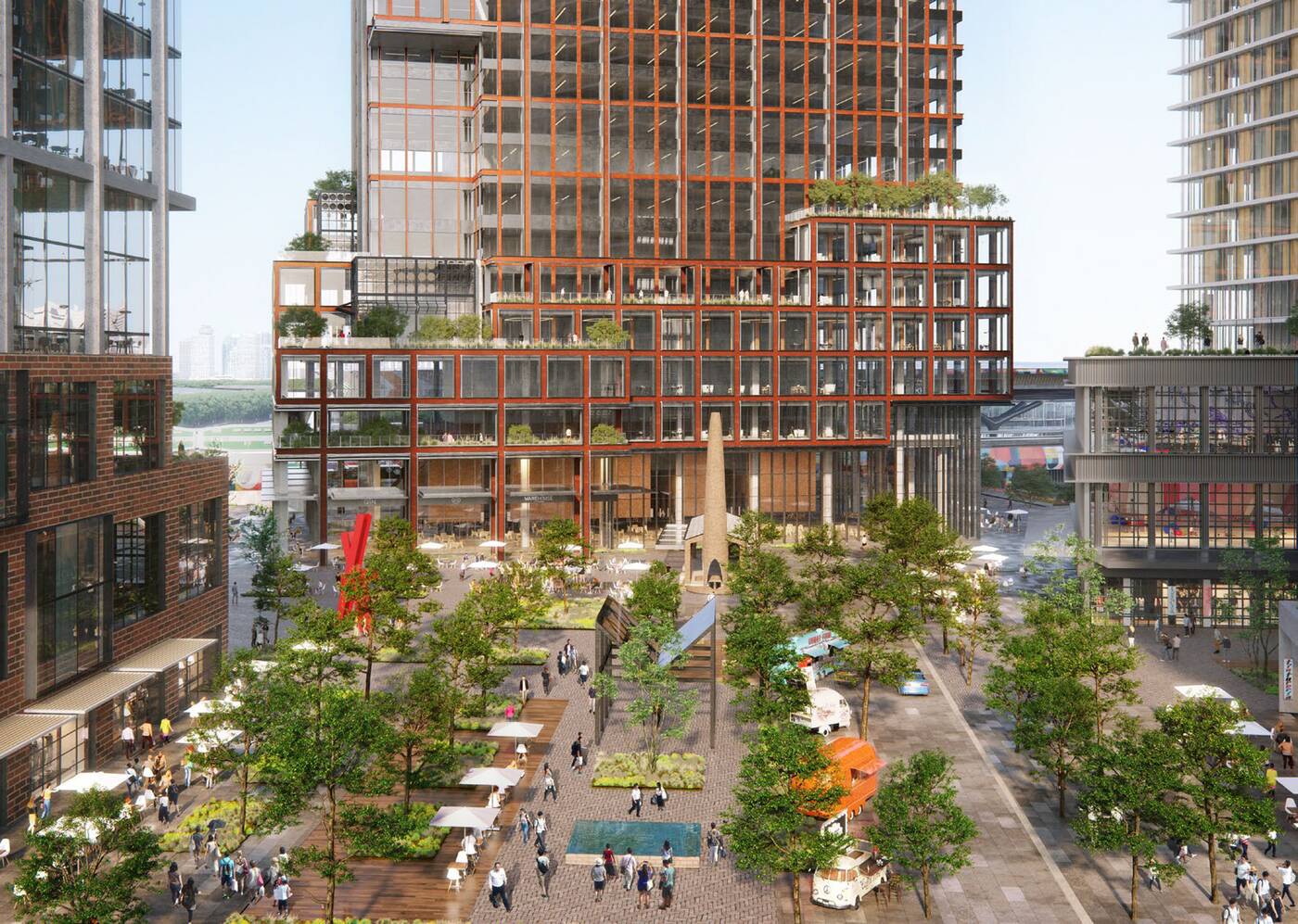 Renderings depict these plazas as large, open areas with little in the way of placemaking, problems which Bozikovic foresees impacting the usability of the space.

Please enjoy the “transit plaza,” a giant open square with no sense of enclosure and no reason to linger pic.twitter.com/TrvZgNTUlz

Though documents submitted with city planners in support of the proposal argue that such large spaces "can accommodate a variety of activities and programming, ranging from small, intimate seating areas to larger gathering spaces for cultural events, outdoor markets or exhibits, and concert performances, among others."

Add in some very wide streets and the fact that a highway is being routed through the area, and the complex's urban design starts to feel a little closer to suburban.

Some very sophisticated people have decided that these big plazas and wide streets are good. Inexplicable. pic.twitter.com/fJcOw2fwWn

This first phase office tower is to be joined by even more commercial density and roughy 4,000 new residential units, supported by community services and facilities including an affordable incubator and nonprofit space, two new on-site childcare facilities, and a new 6,500 square-metre community centre.