One of Toronto's most thoughtfully-designed (and headline-worthy) homes has gone up for sale in wealthy Lawrence Park, less than two years after its initial completion and for a price that few can afford.

But it's nice to dream and creep on cool real estate pictures, isn't it? Yeah. It is. 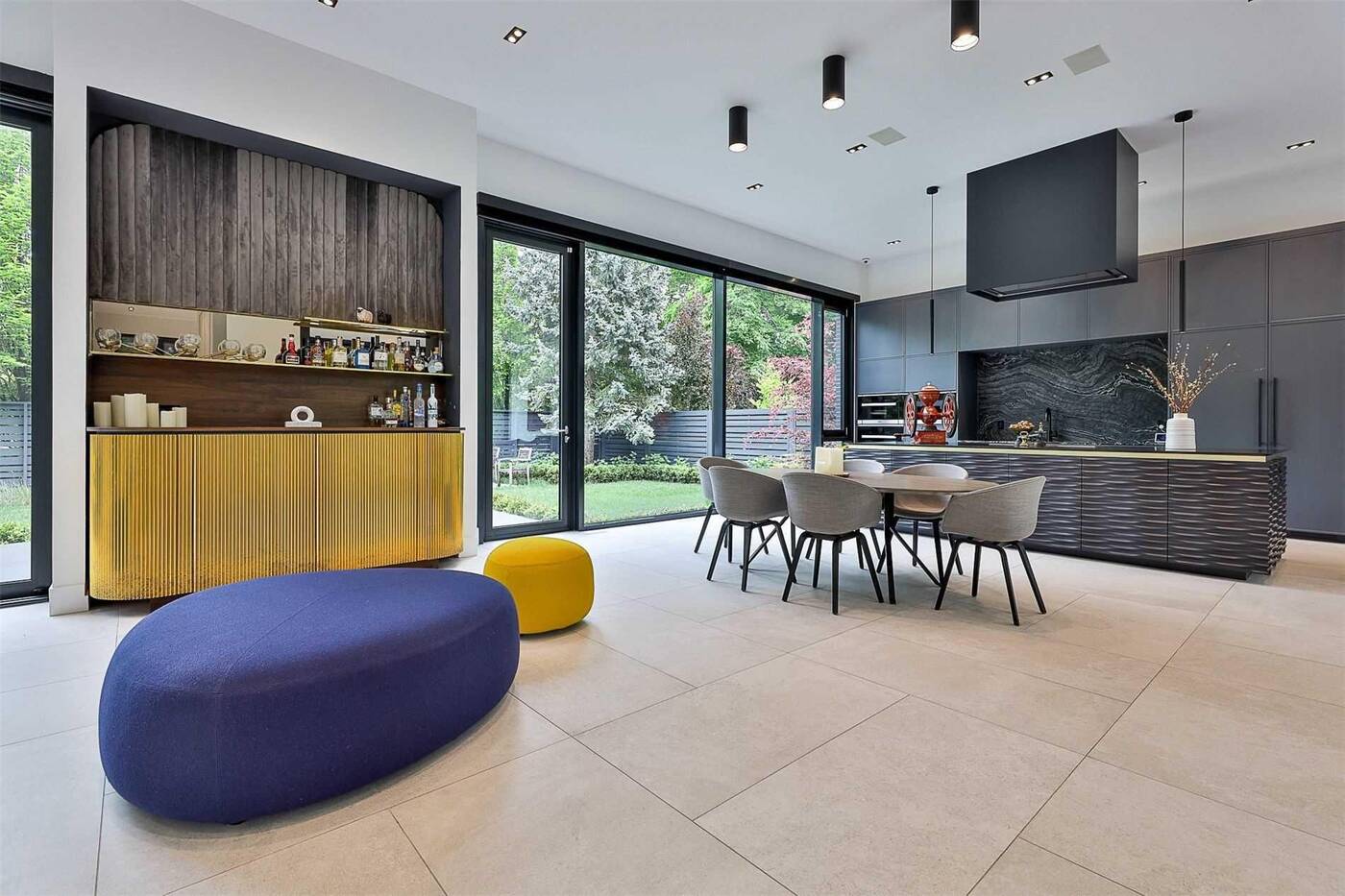 A view of the kitchen from a bar/lounge and eating area. Photo by Michael Peart.

The unmistakeable "Bezier Curve House" at 108 Stratford Crescent can be yours for just under $13 million, if you're looking for something with both curb appeal and sky appeal. 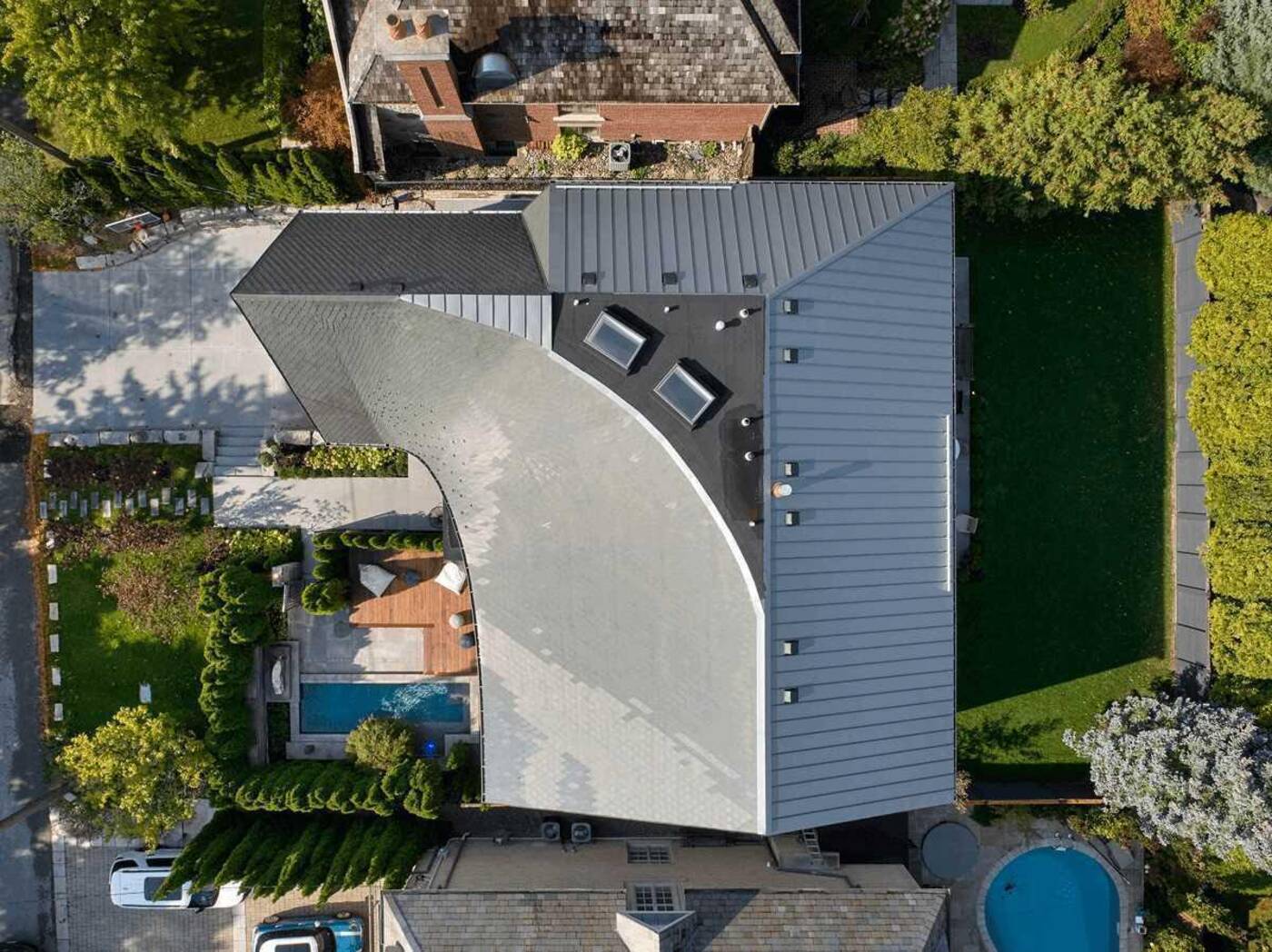 An aerial shot of the home's curving roof.

Built by custom home builder Farhad Kazmian (ABOND Homes) and architect Tania Bortolotto (BORTOLOTTO), the house was literally designed to be "the antithesis of the boxy fishbowl."

Kazmian had lived with his family on the property since 2011 and wanted to remodel, but had some unique requirements; he wanted to keep his beautiful courtyard with lap pool, which required wrapping the full house around it.

Bortolotto delivered a solution by way of an L-shaped, modified A-frame house rooted in mathematics. 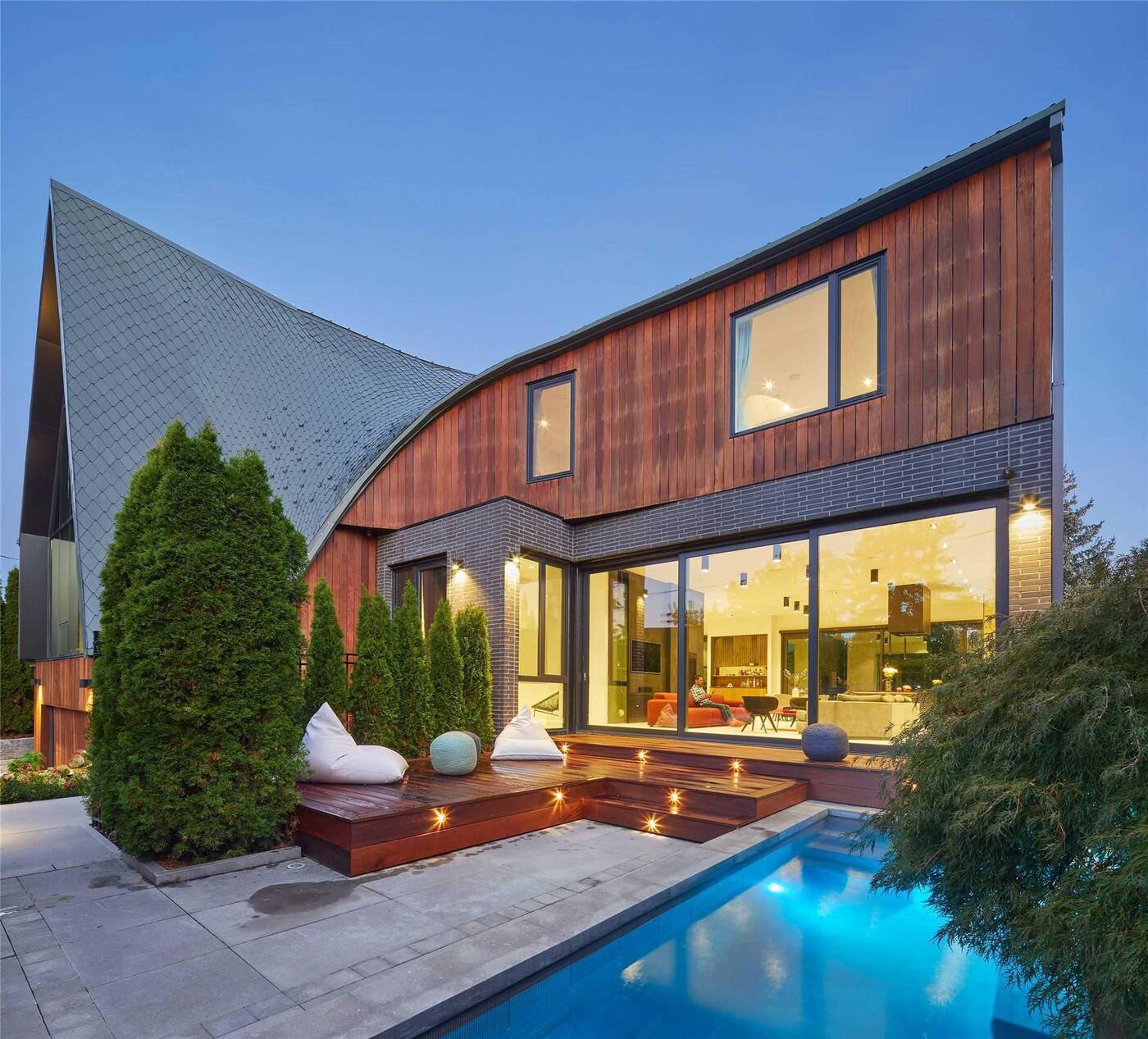 The resultant property is known in design circles as the Bezier Curve House because its structure was based on a parametric equation often used in computer graphics and animations to create perfect curves using control points.

"Mathematicians often speak of the beauty of a math equation, but when you see this formula put into practice in the roofline of a custom home in North York, Ontario, Canada, the beauty comes to life." 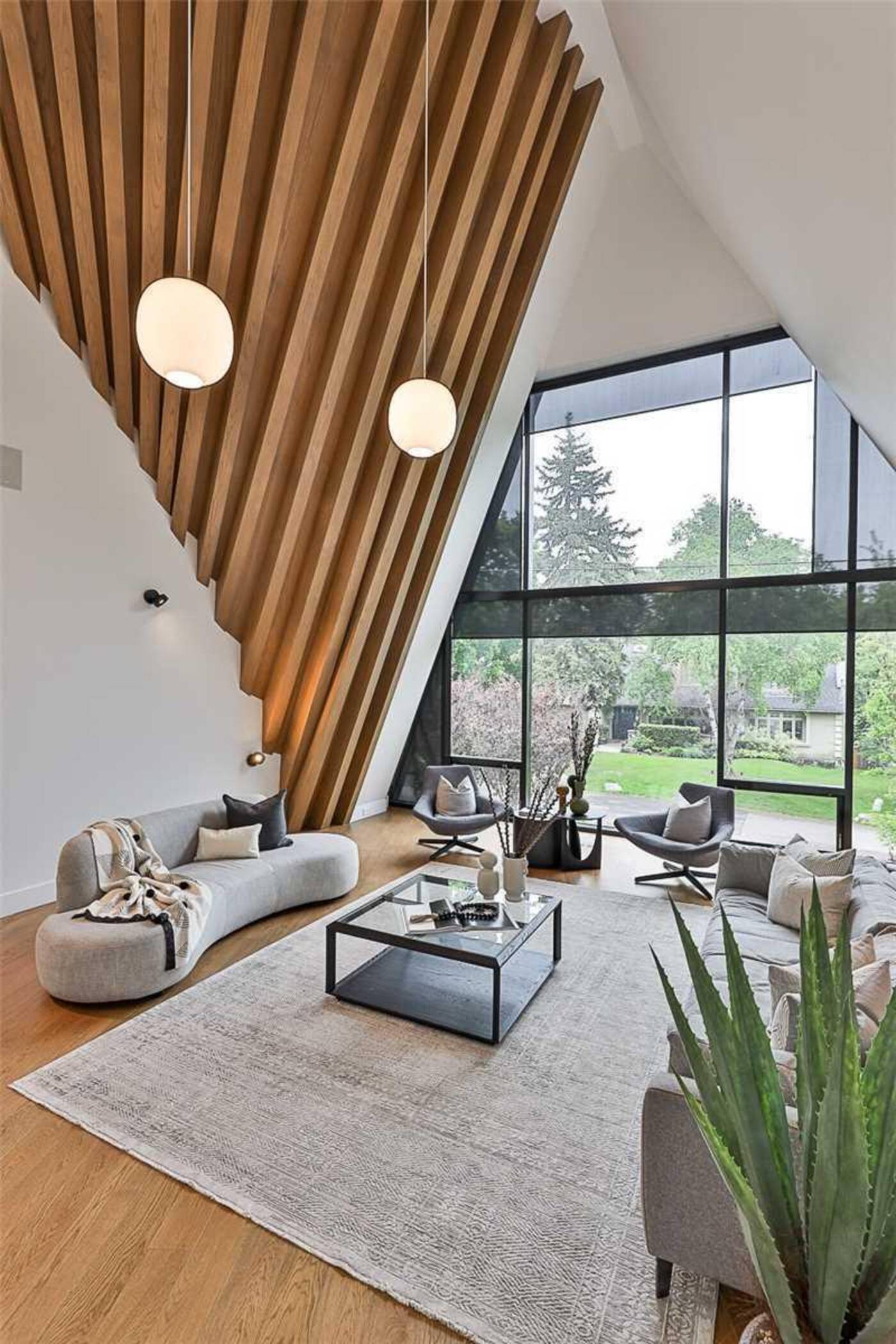 The soaring ceiling and wood beams of the living room. Photo by Michael Peart.

To say this home has curves in all the right places is an understatement; its curves are mathematically perfect. 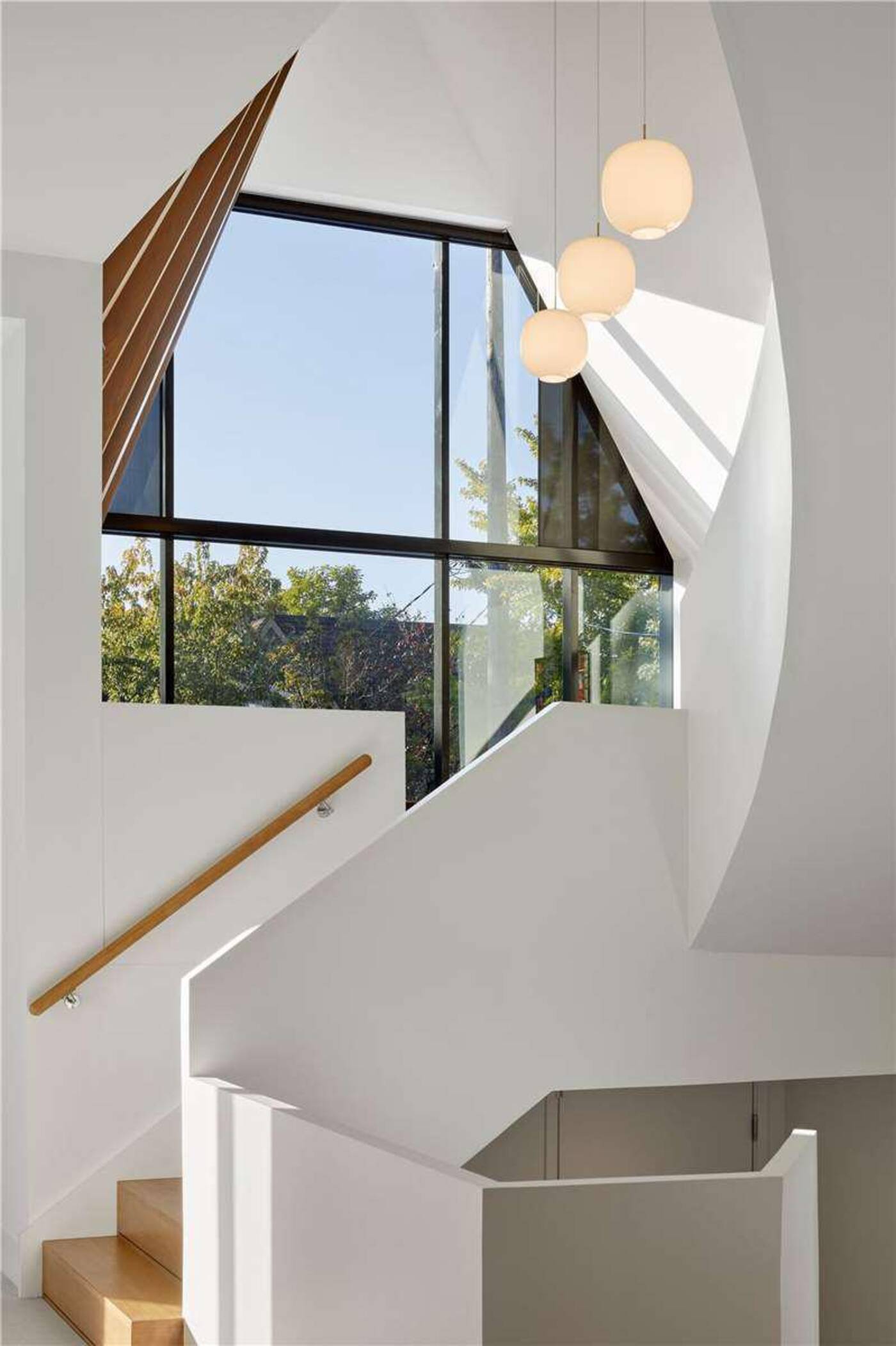 A staircase giving the AGO a run for its money.

Some parts of the space are intricate and impressive enough to look like they belong in a gallery. 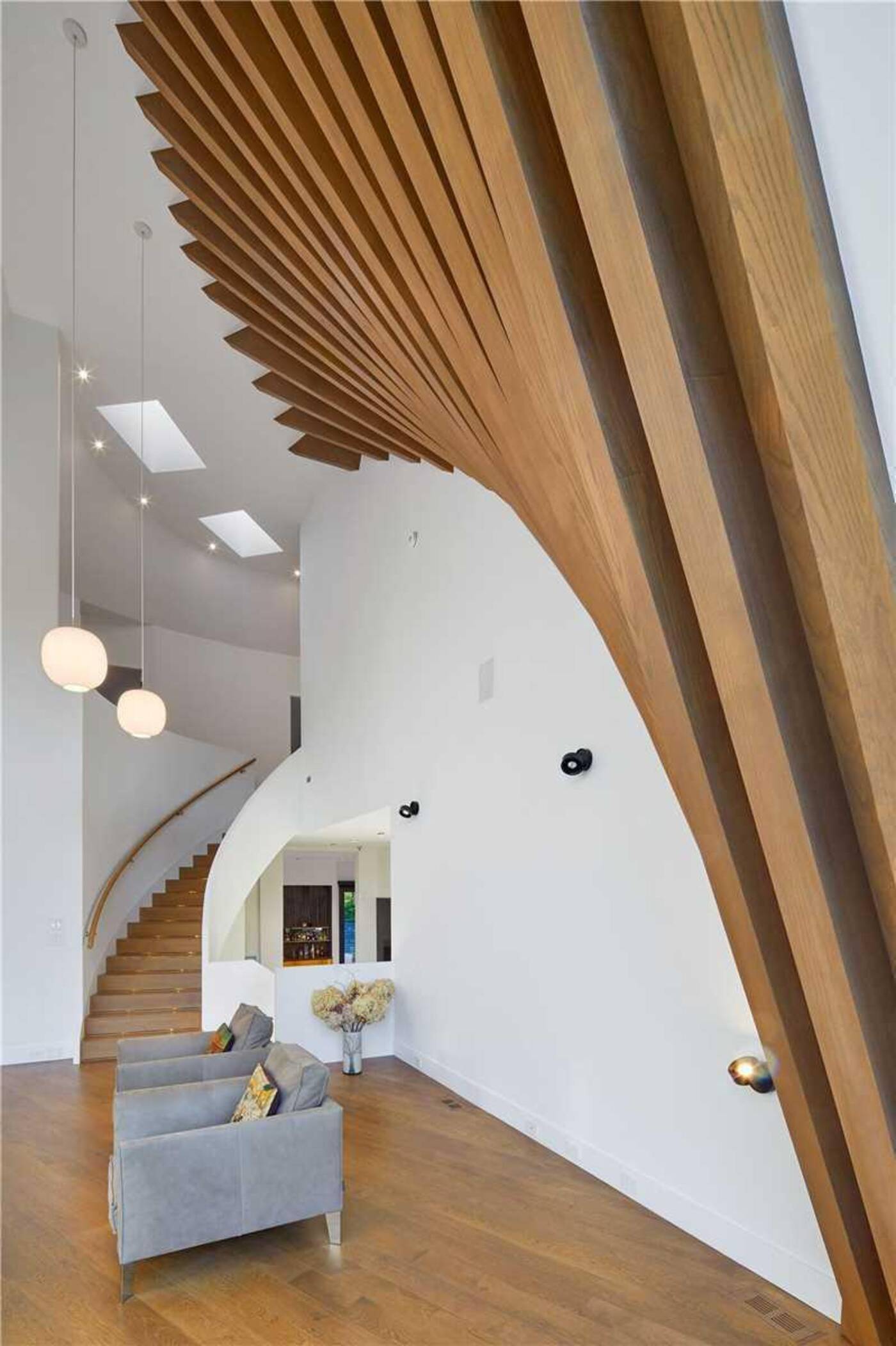 Another view of the curving staircase.

Other parts, not so much. 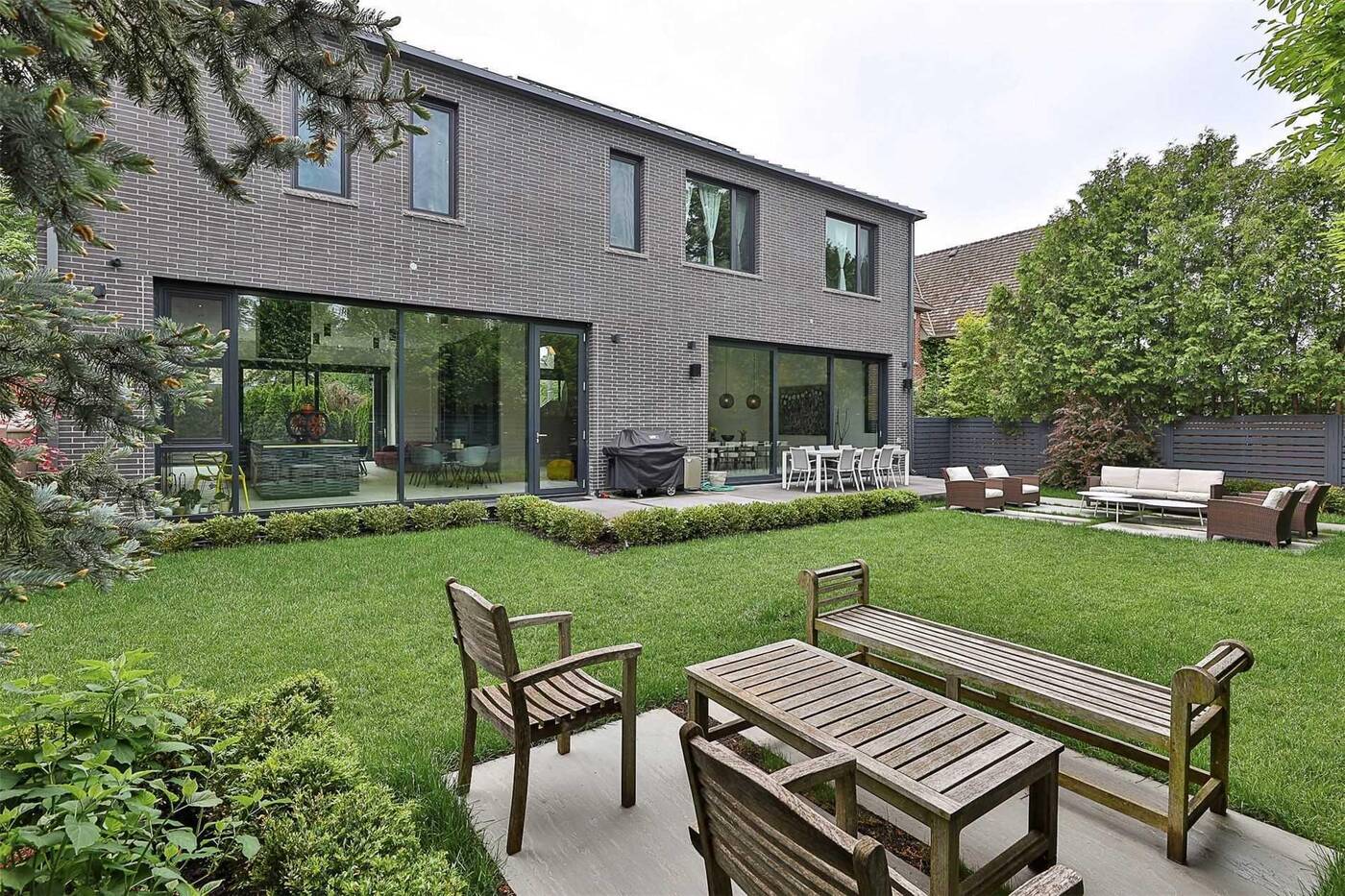 The backyard. Photo by Michael Peart.

With four-plus-two bedrooms and seven bathrooms, there's plenty of living space within this 7,500-square-foot residence. 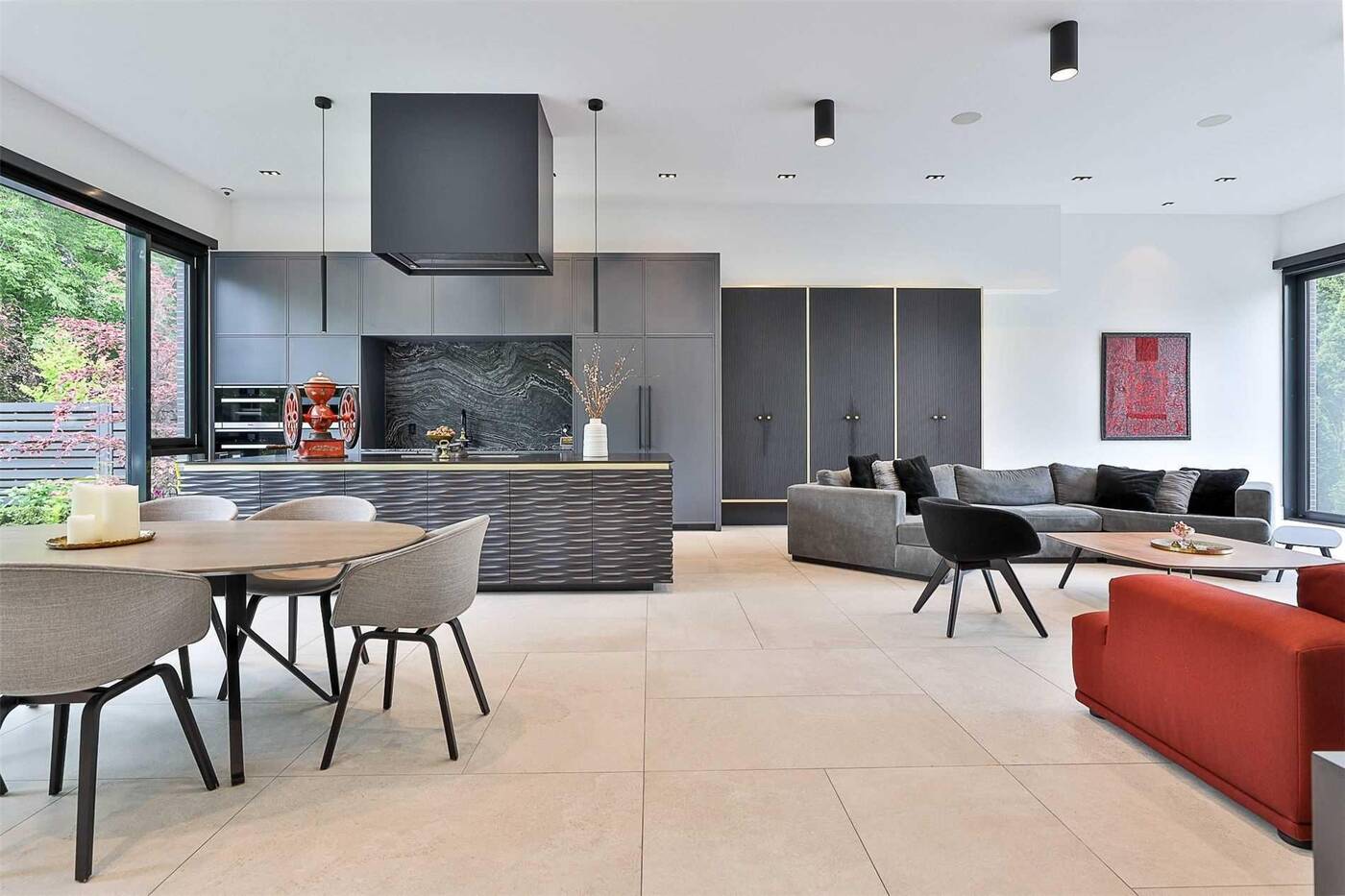 A listing for the property says it represents "the quintessence of modern luxury living" with unrivalled quality and bespoke finishes. 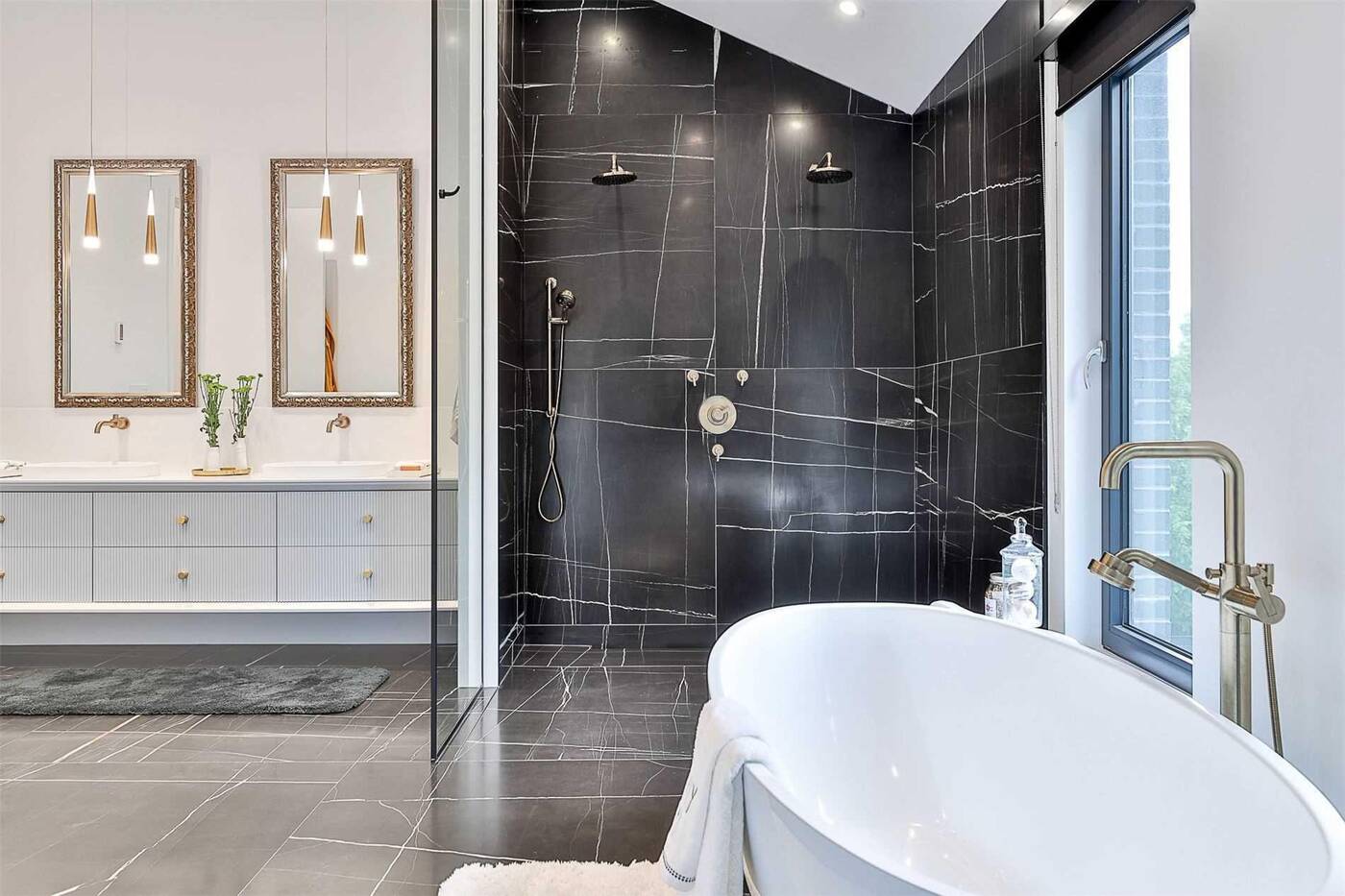 One of the bathrooms with dual shower and soaker tub. Photo by Michael Peart.

"Situated on a beautiful tree-lined street in the heart of Lawrence Park, the 'Bezier Curve House' provides a glimpse into the future of design," reads the listing, boasting of the home's "one-of-a-kind articulation of modern and design." 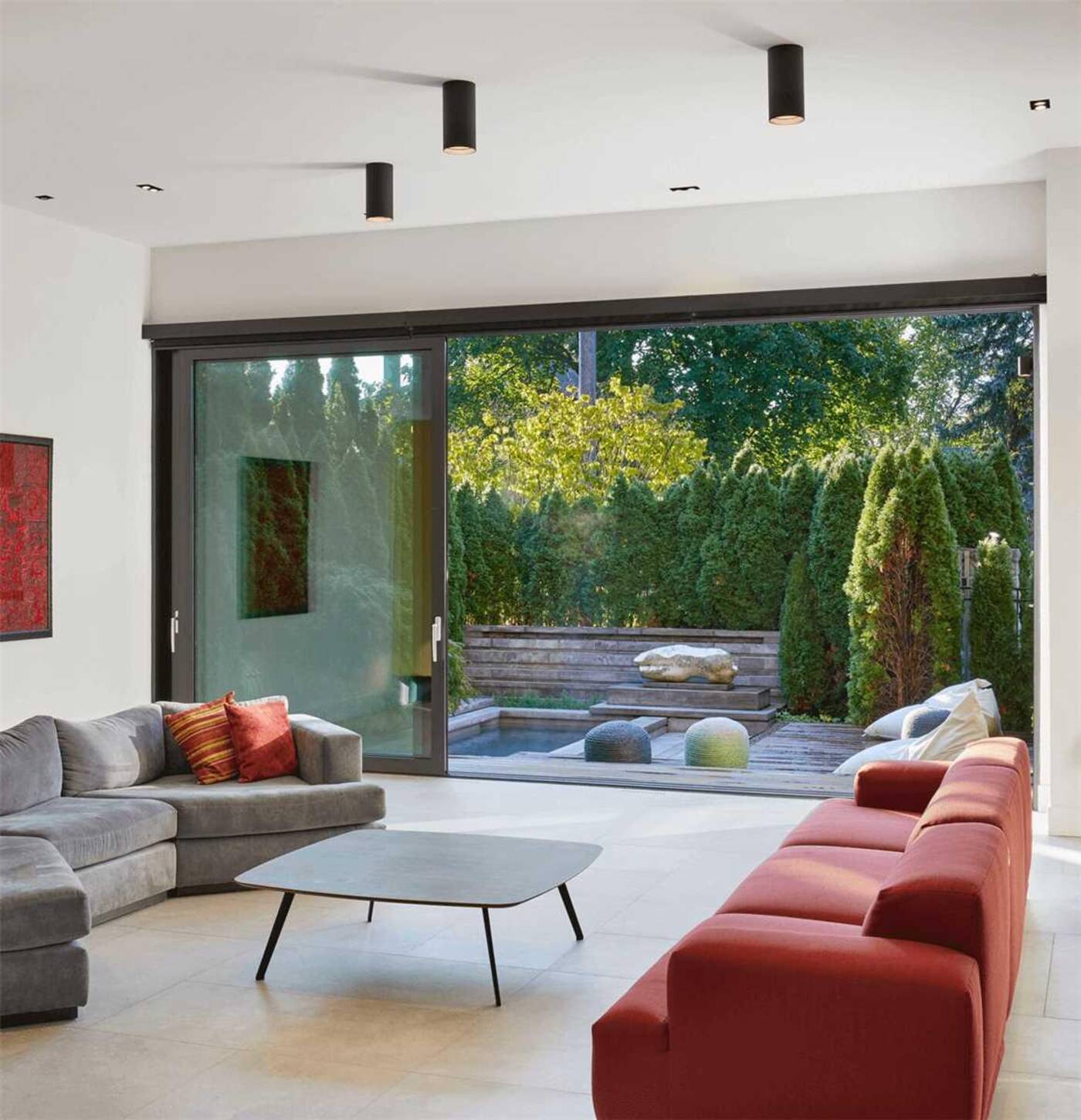 A living room with deck walk-out.

The location would be fantastic for a family with great public and private schools nearby, as well as large green spaces including the Alex Muir Memorial Gardens and Sunnybrook Park... not that you'd need to go far for recreation.

Described as a "pioneering architectural tour de force" — and rightfully so — some parts of the home (chiefly the bedrooms) don't quite match the splendor of the house's exterior. 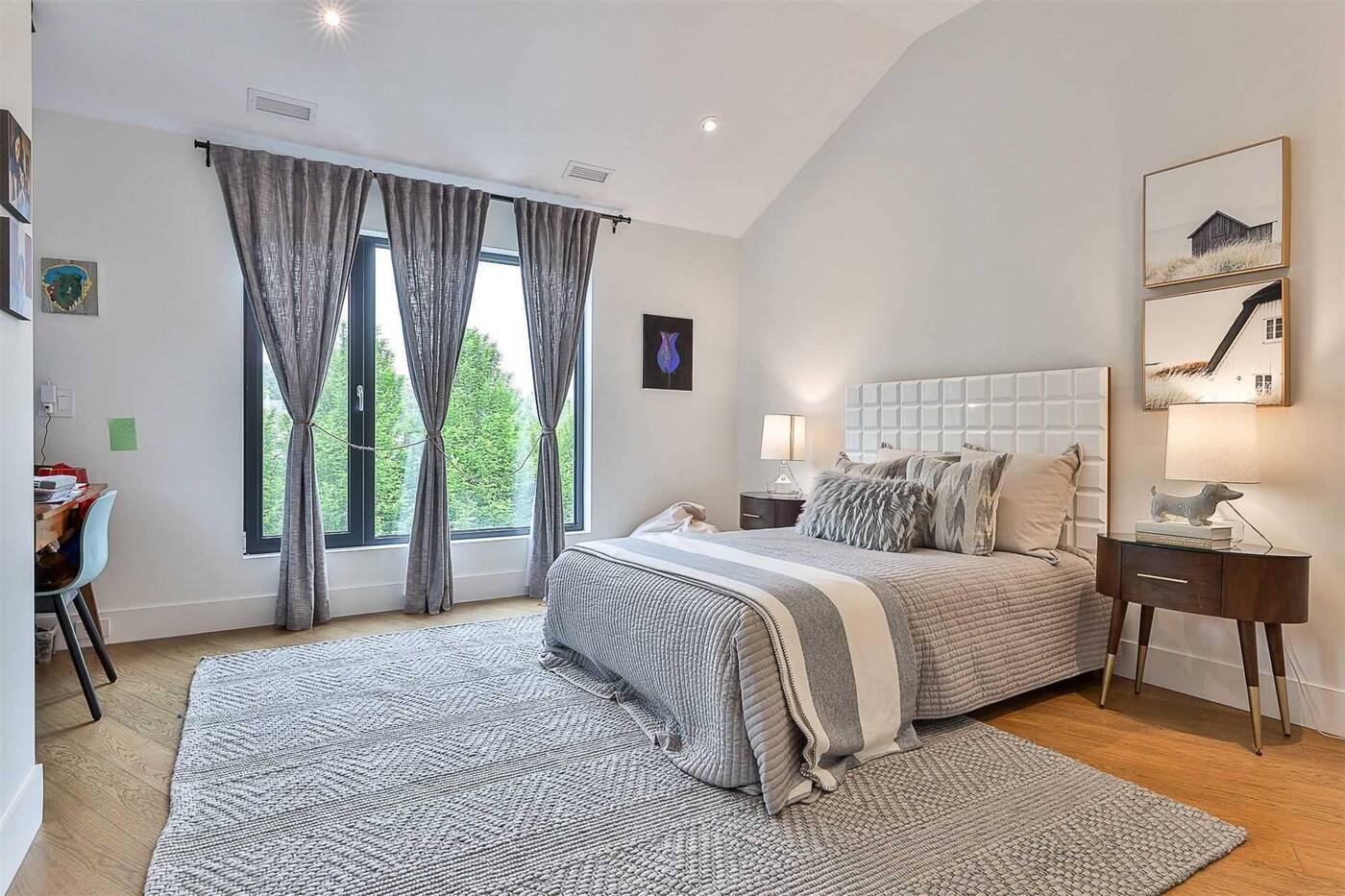 One of the bedrooms. Photo by Michael Peart.

The basement is, well, a basement. 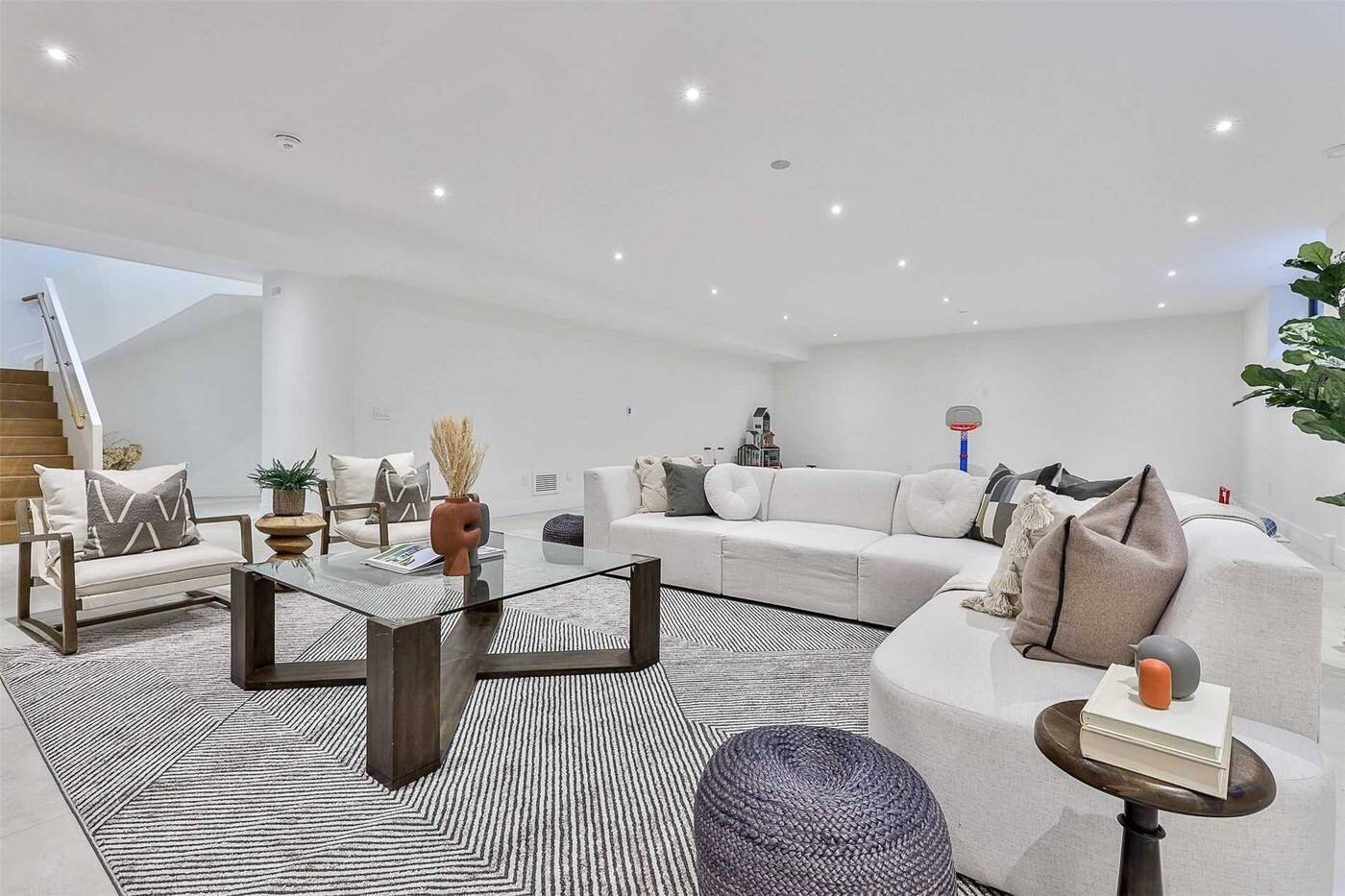 A sitting room in the basement. Photo by Michael Peart.

But unique furniture and design elements elevate the main living spaces into something far beyond the boxiness Kazmian had been looking to avoid.

Entertaining here would be a dream with ample dining space. 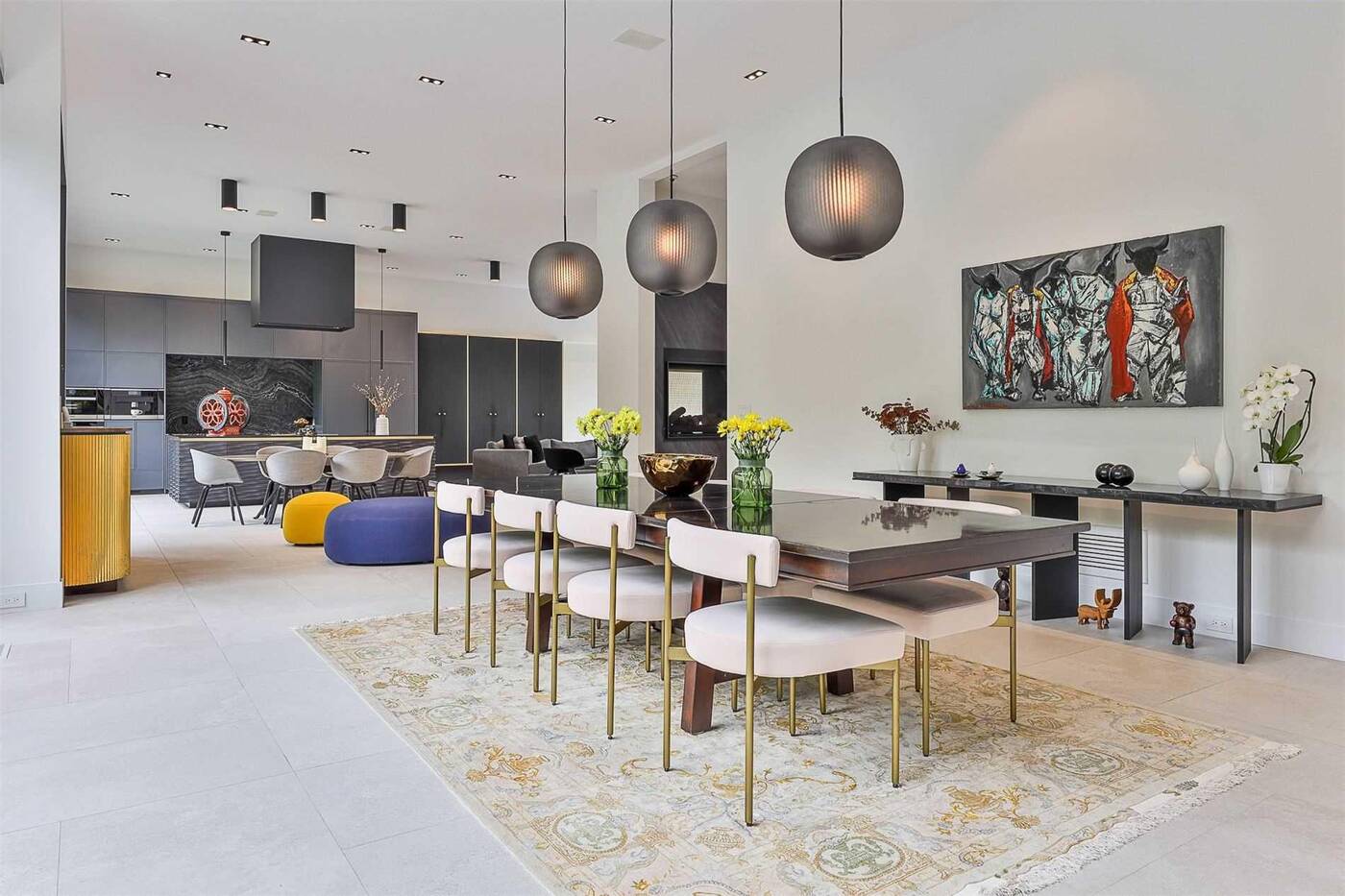 Two areas set up for dining. Photo by Michael Peart.

Not to mention all of the indoor-outdoor living areas.

And those signature curves can be found inside as well as out in some parts of the home. 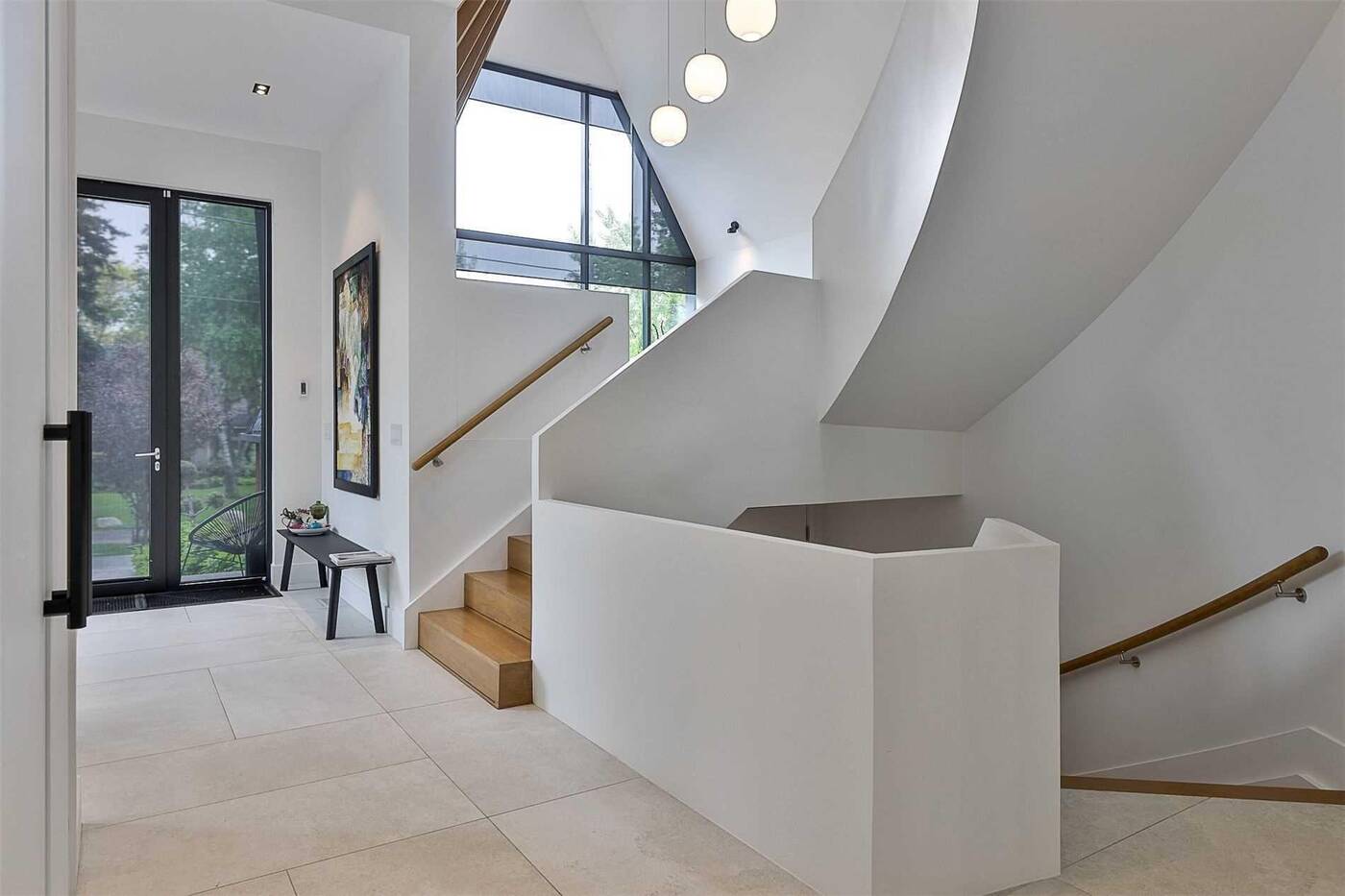 The foyer. Photo by Michael Peart.

Is it an affordable option for the average family? Not by a long shot. But damn is this ever a cool house for someone who likes math, wants a personal lap pool and enjoys impressing random drive-by strangers.

It's also got six parking spots. That alone could help offset a bit of the mortgage... maybe even more than a bit.