If you're looking for a condo that has history, character, and is in a convenient location, then the Brock Lofts is one of your best bets.

The building used to be a phonograph manufacturing factory in the 19th century. (Side note: A phonograph, for anyone under the age of 100, is an old-timey record player.)

Anyway, at some point the two-storey building was carefully restored and turned into 24 lofts. The exterior of Brock Lofts. 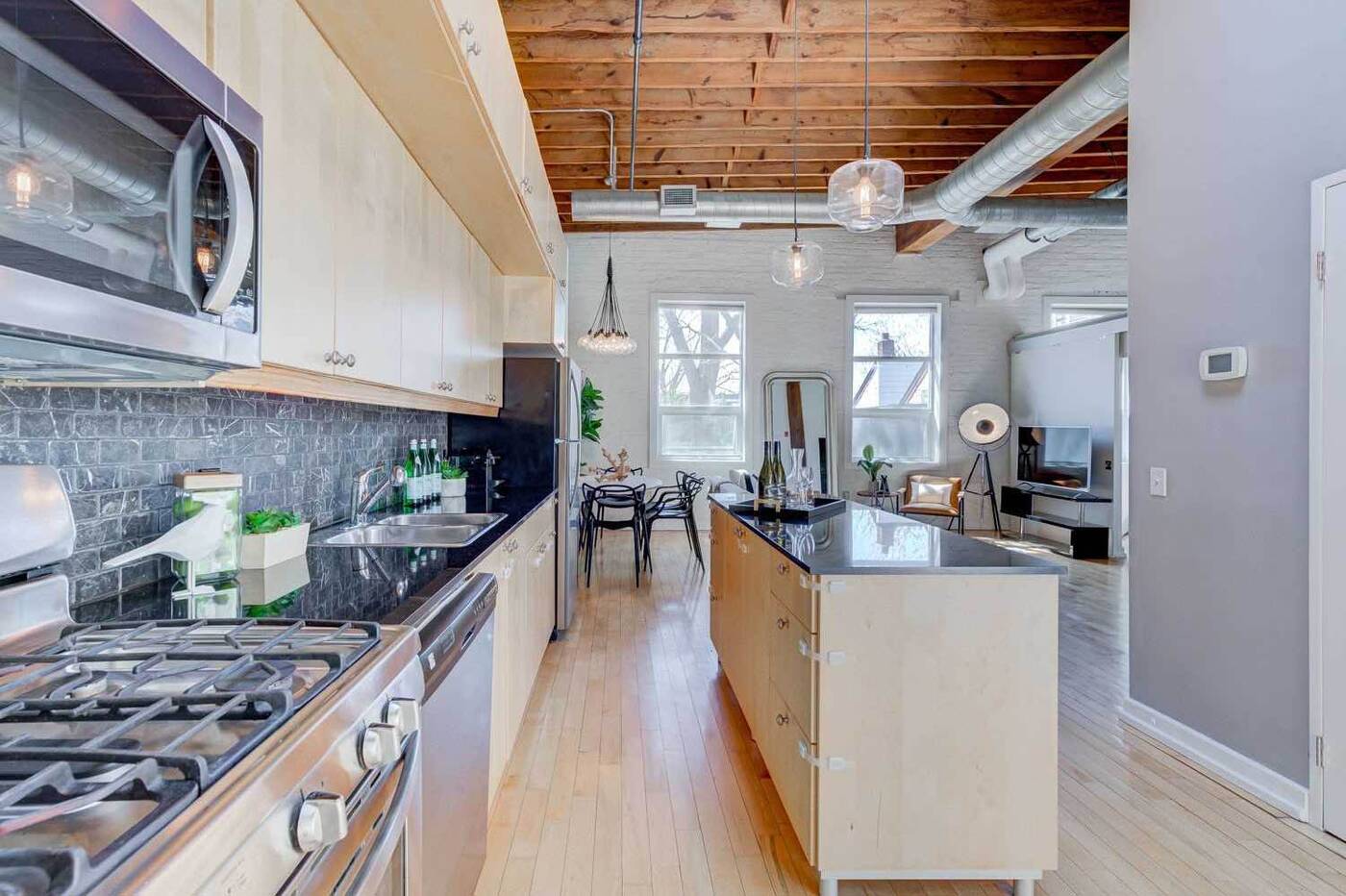 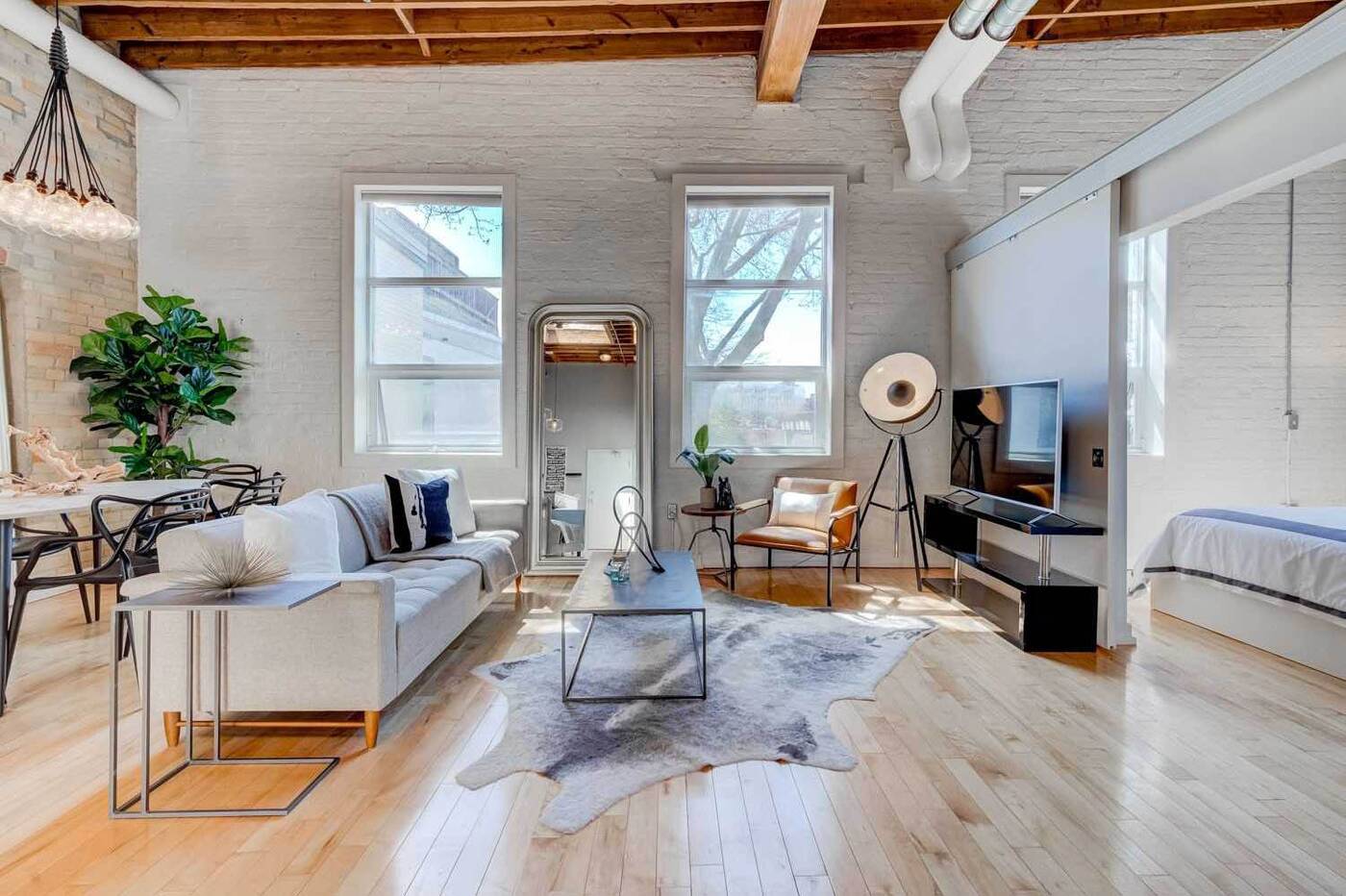 "You have the height to put a basketball net in there..." said realtor Michael Prior in reference to the ceiling height.

But don't worry it doesn't feel small at all thanks to the open concept layout, soaring 13-foot ceilings and the abundance of natural light.

"[It's] so bright, it's quite wild. The three massive south facing windows and the skylight let in so much to the unit," realtor Michael Prior told blogTO. 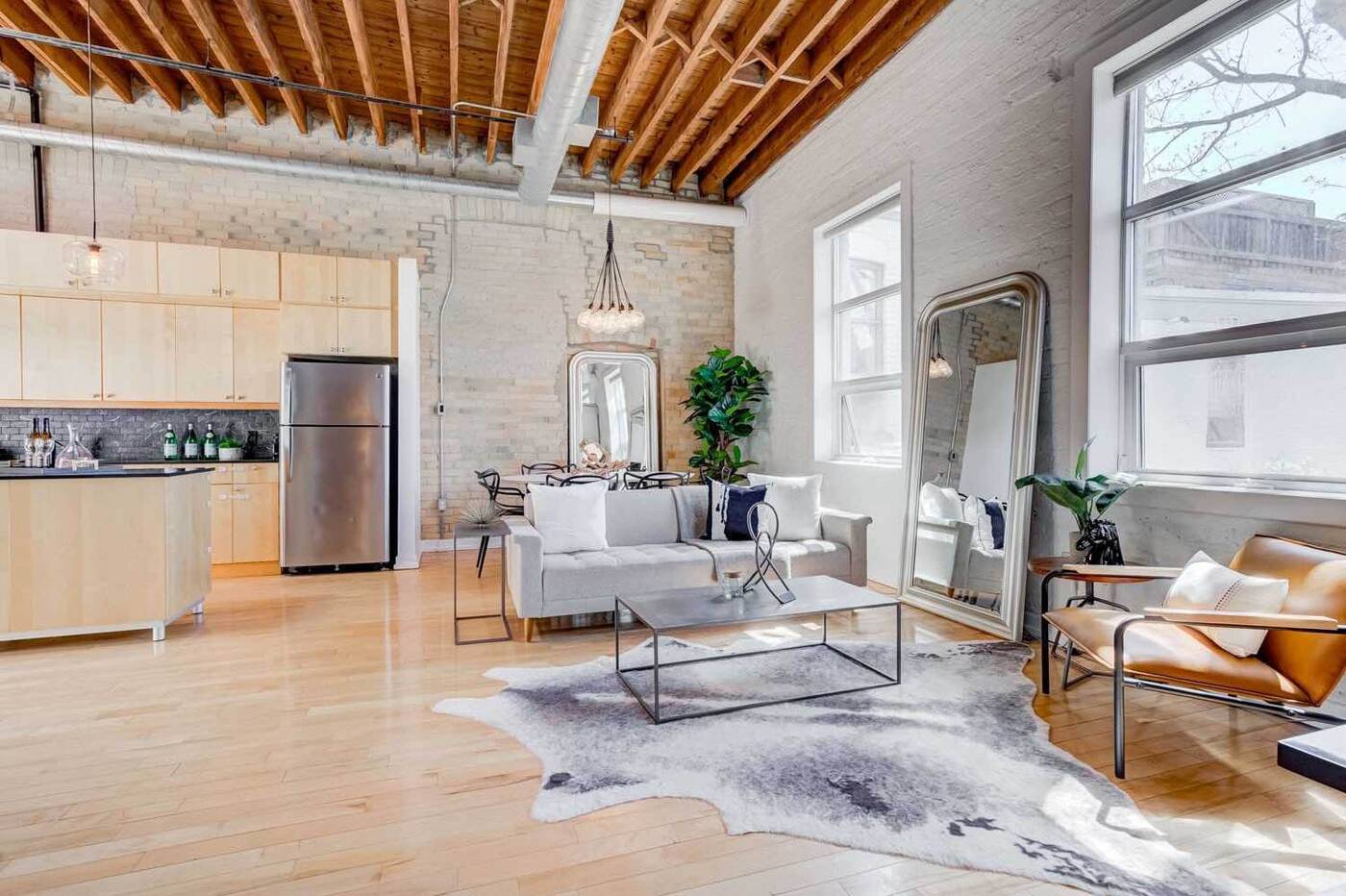 The open concept living, kitchen and dining area is perfect for entertaining.

The exposed brick and wood beams add plenty of character. 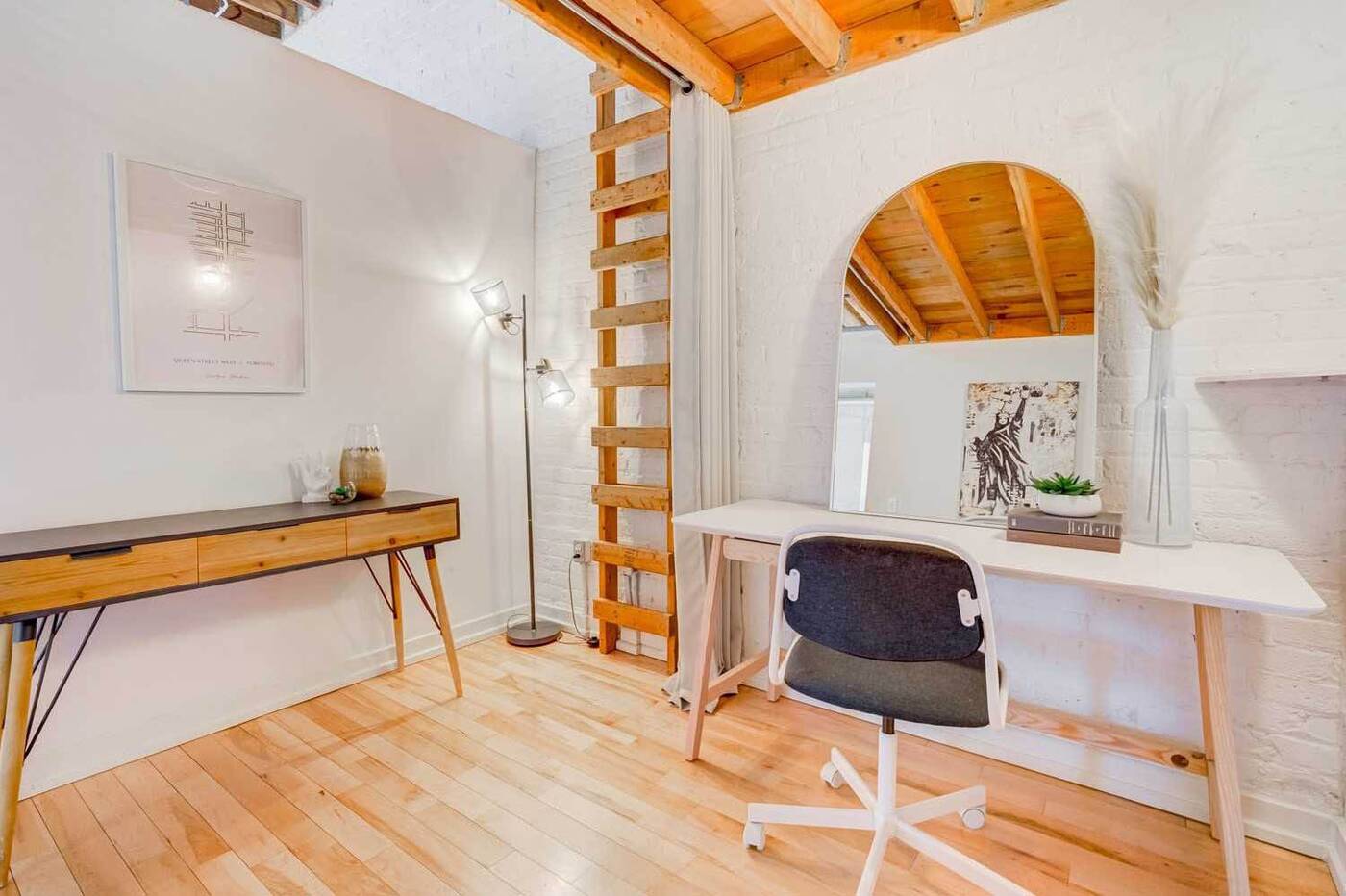 The second bedroom is currently being used as a home office space.

This unit has two-bedrooms, but the second bedroom is acutally a bit sneaky; up the ladder there's a secret loft bedroom. 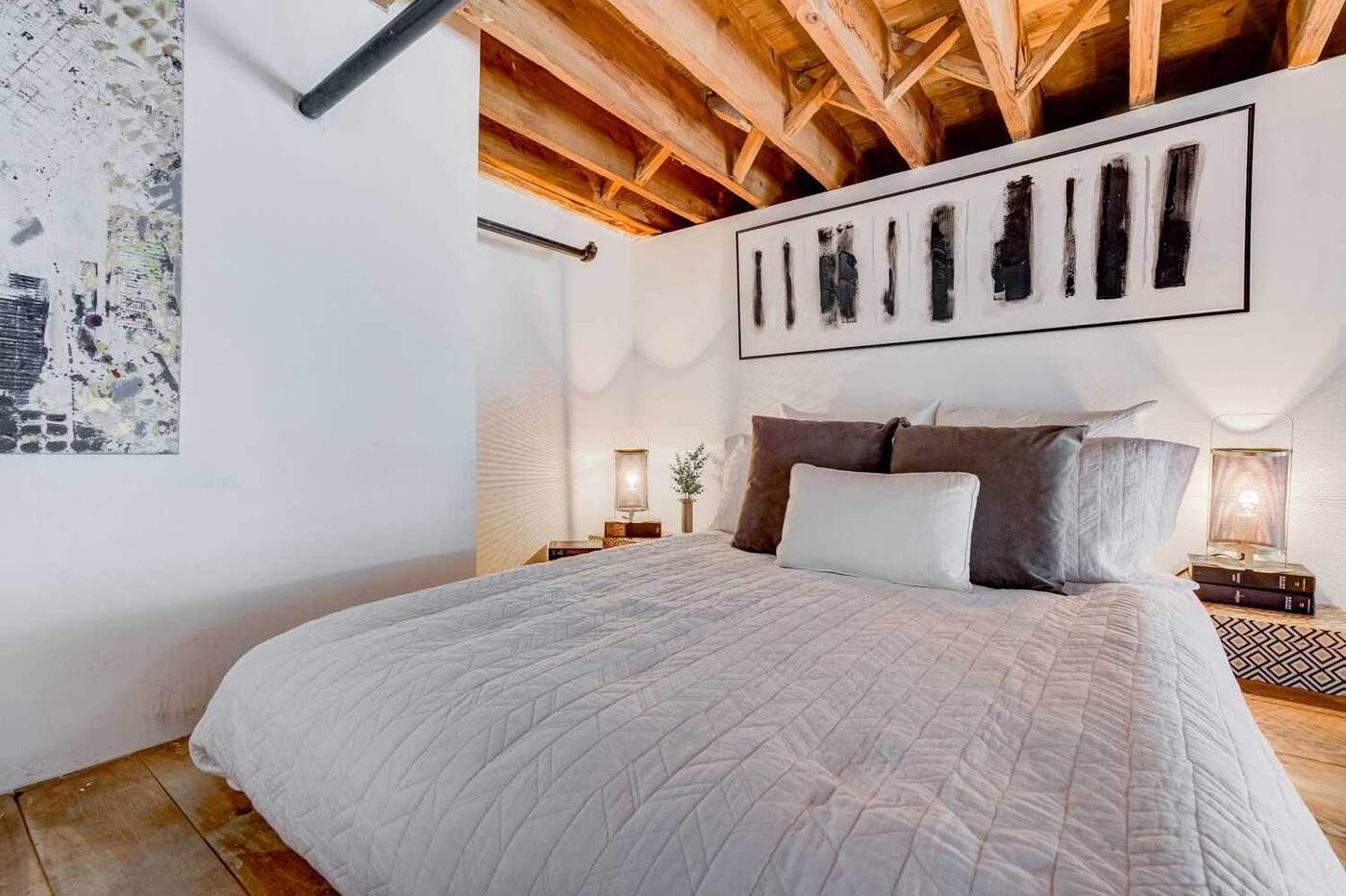 Can you stand up in it? If you're under 5-feet you can!

"Imagine having the ability to almost double the square footage of a room by adding a loft above the second bedroom. My clients used to watch movies on a projector up there. So cute!" added Prior. 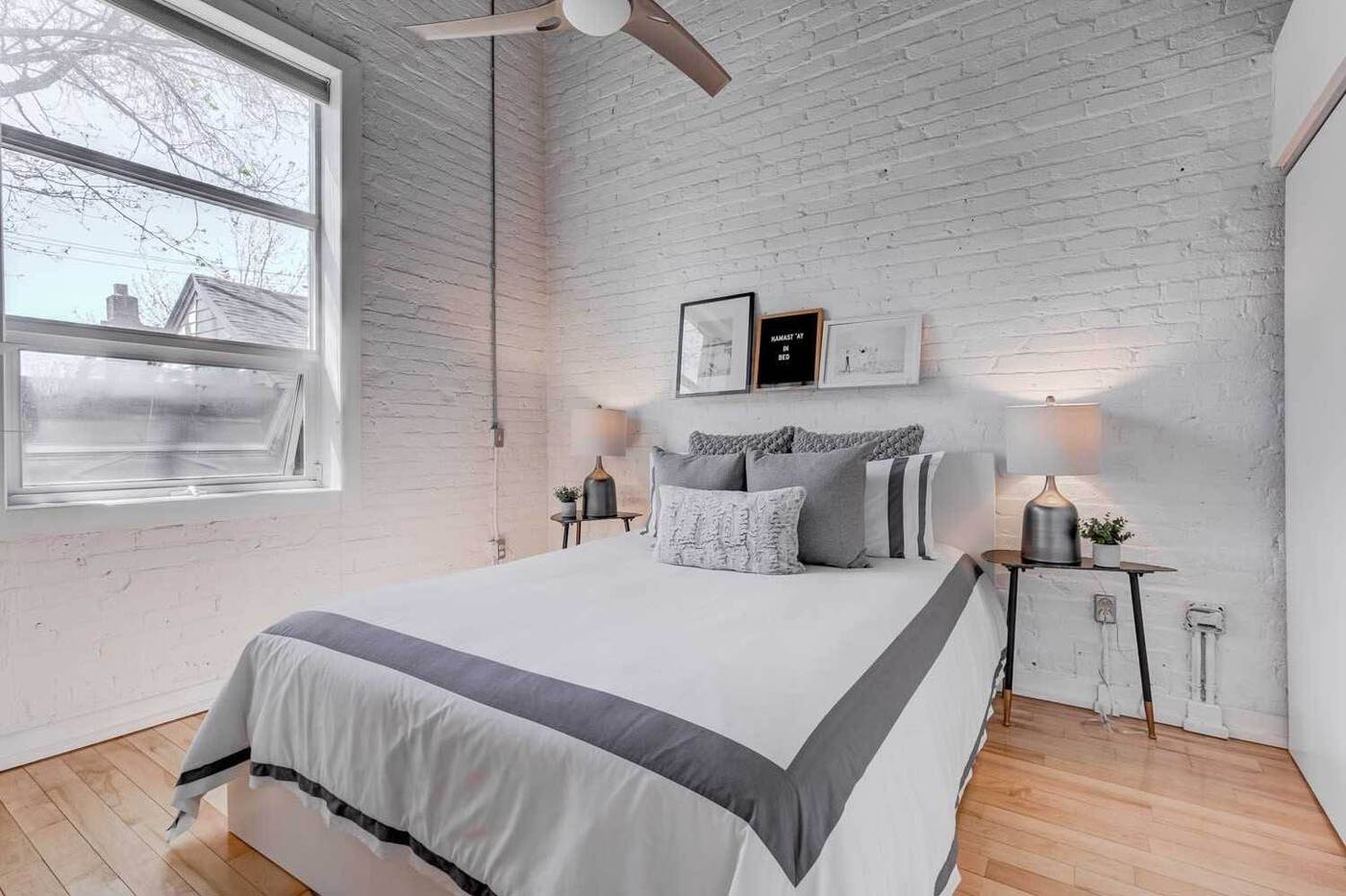 So really, this could almost be considered a three-bedroom condo. 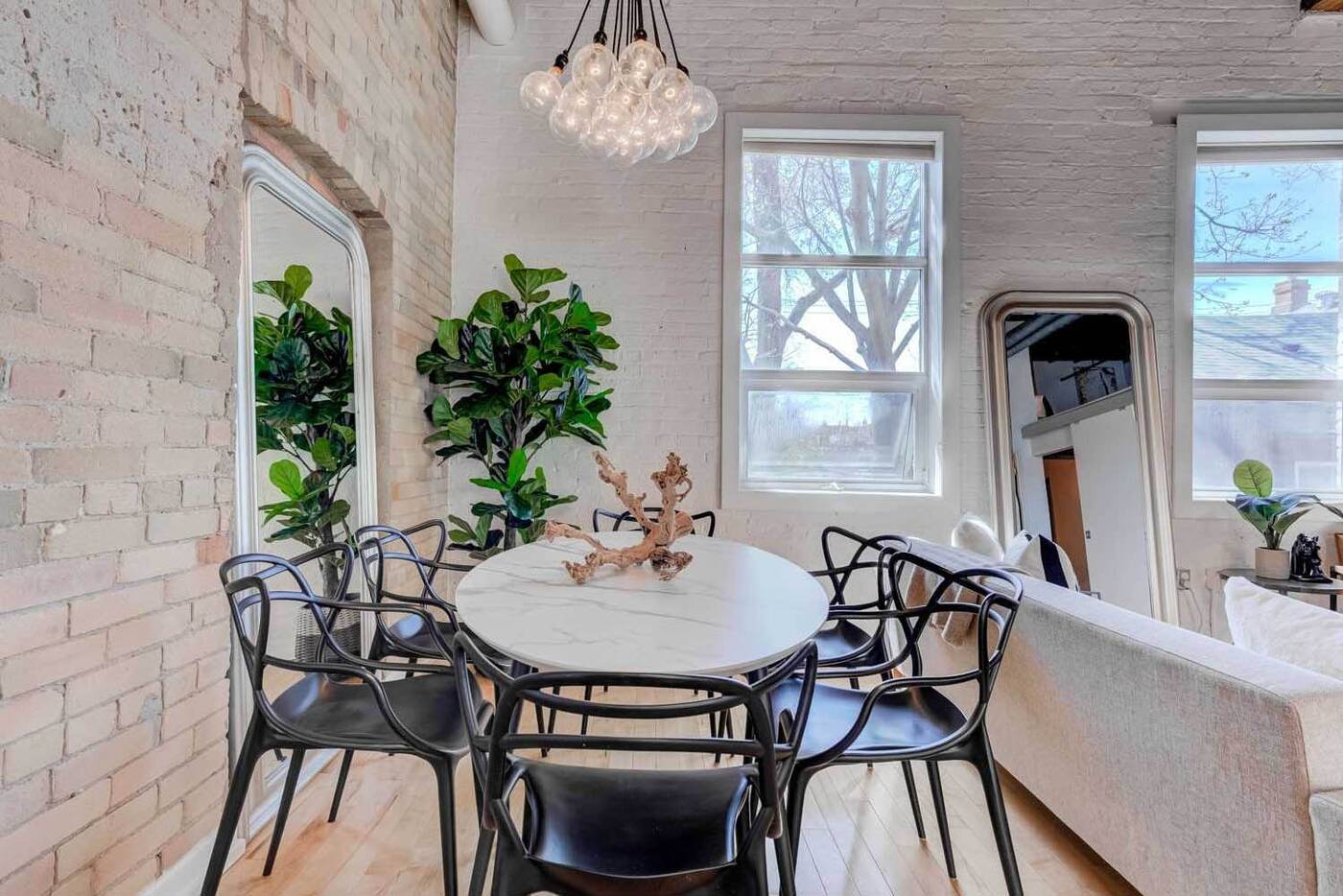 The other cool thing about this unit is that since you're on the second floor you have no upstairs neighbours. 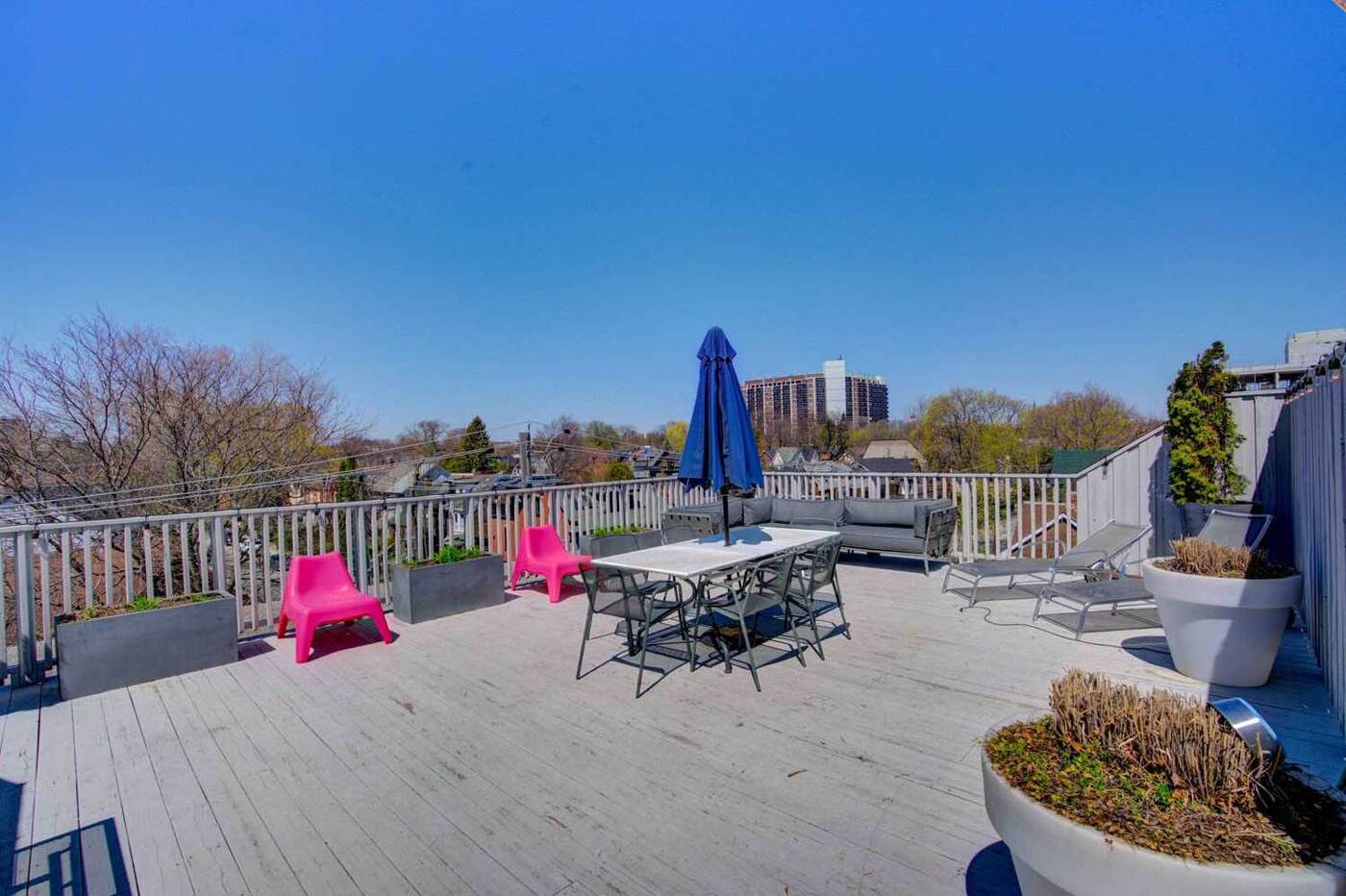 Views of Parkdale from the sunny rooftop patio.

As far as amenities go, Brock Lofts doesn't have many, but it does have a shared rooftop patio with a BBQ. Plus, this unit comes with a parking spot and the condo fees are all inclusive. 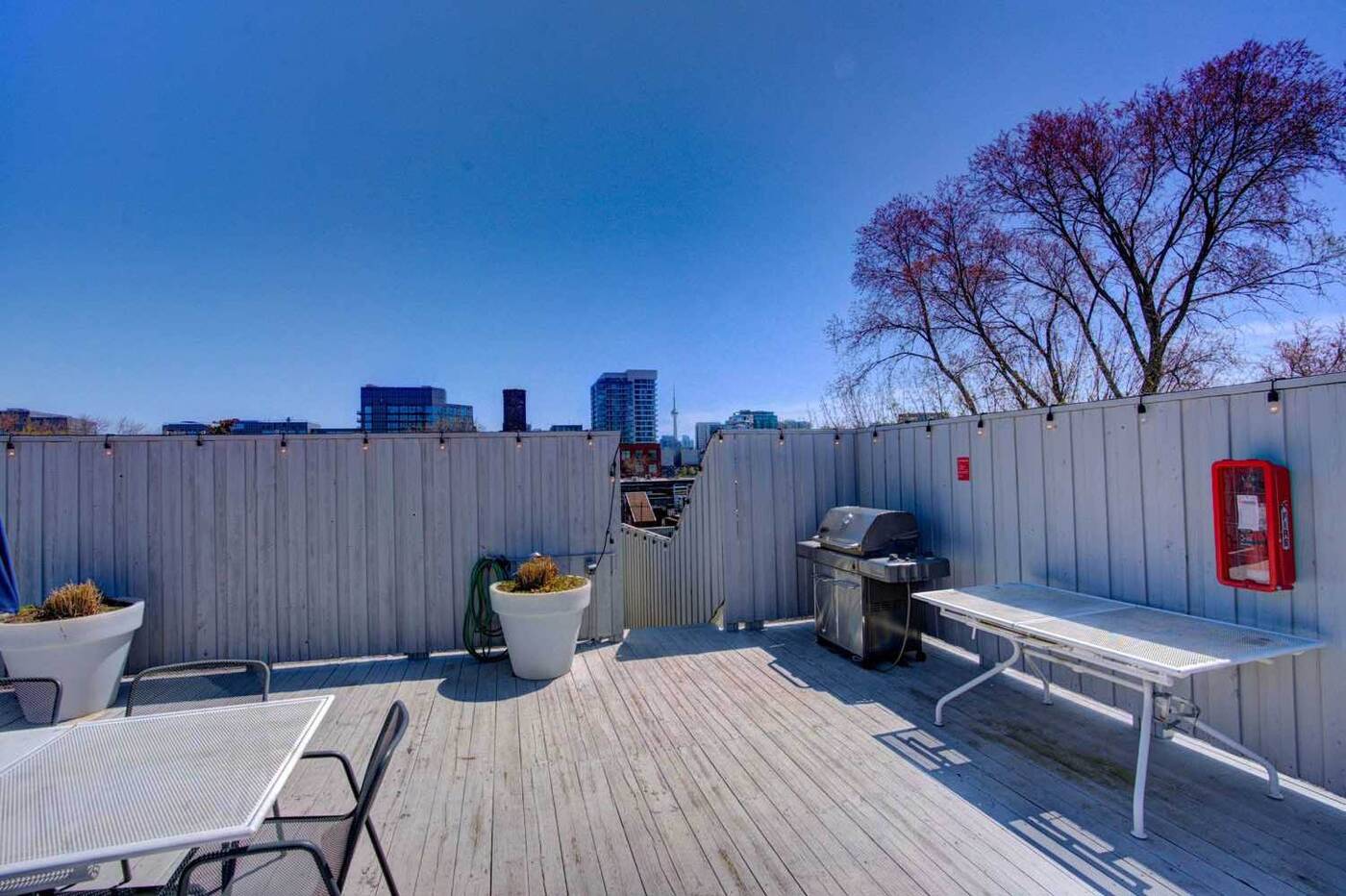 The shared BBQ on the rooftop patio.

Also, a little birdy told me that they're getting Bell Fibre internet for the building soon. 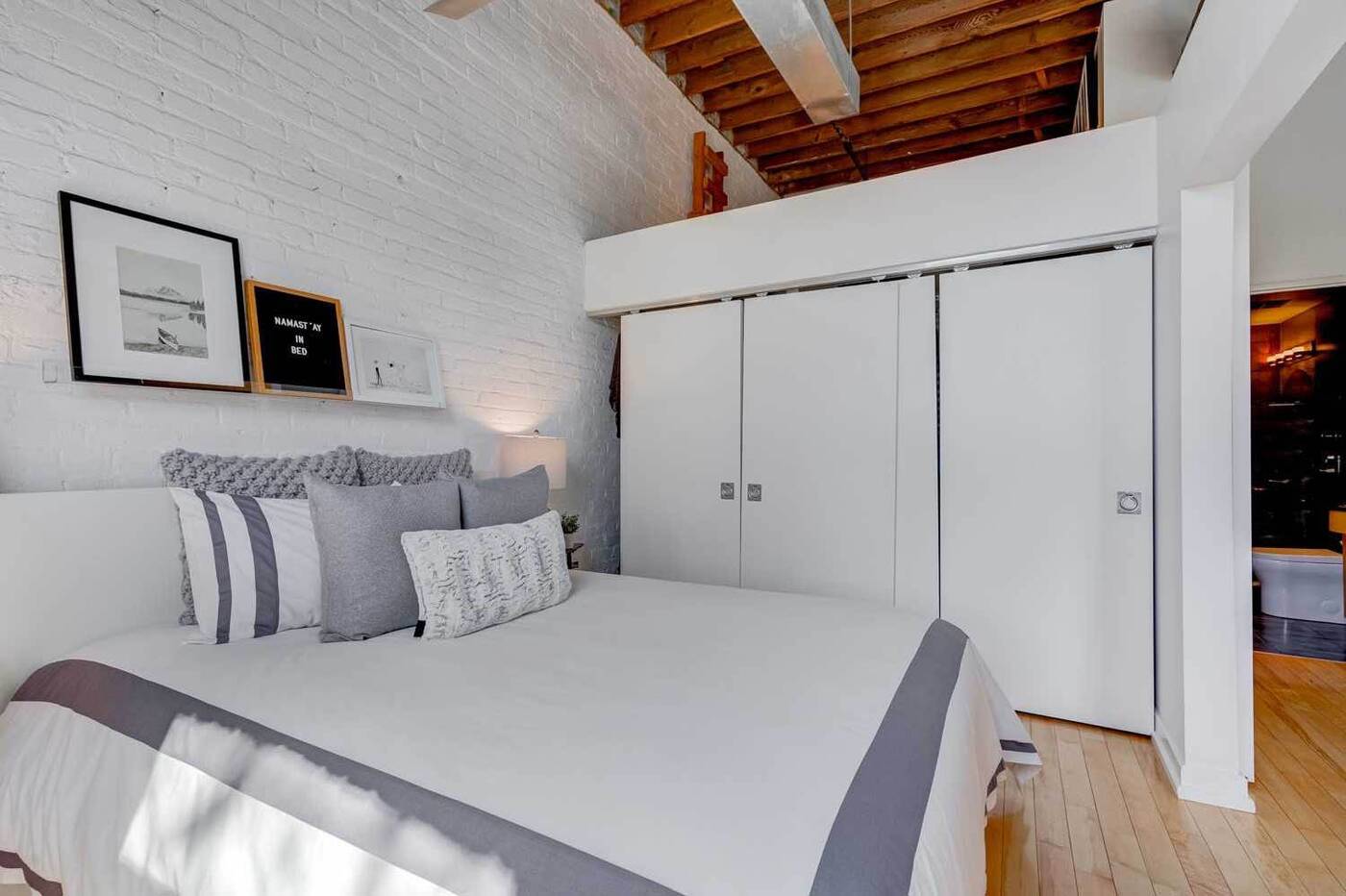 The primary bedroom has plenty of closet space.

The only downside is that while it might be a two-bedroom, it's not really a two-bedroom since the walls don't go to the ceiling. 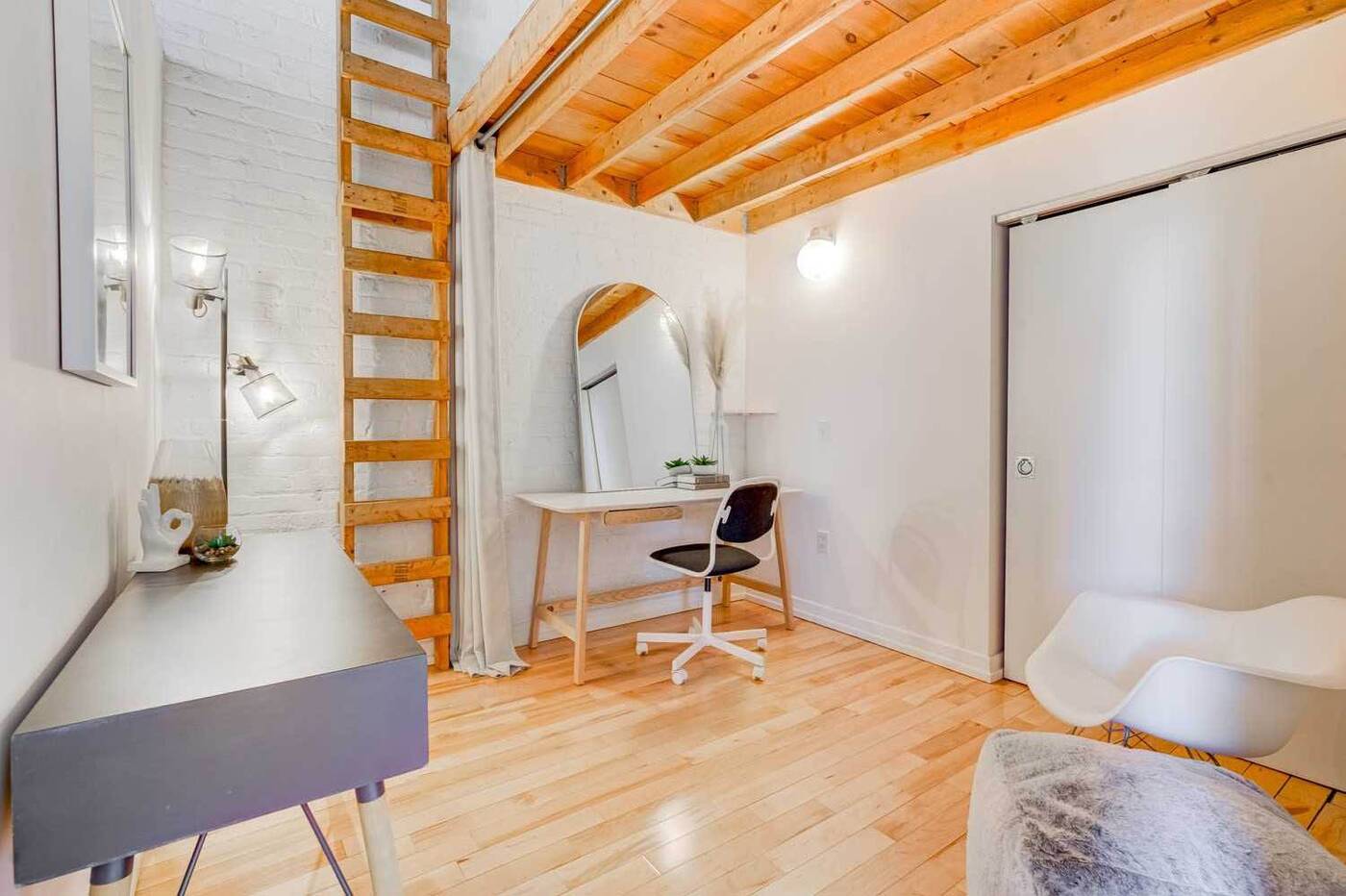 The unit comes with all the appliances including a washer and dryer.

So if you had a roommate or guests who snore loudy, that sound will travel. But otherwise this place has a lot going for it, especially location wise. 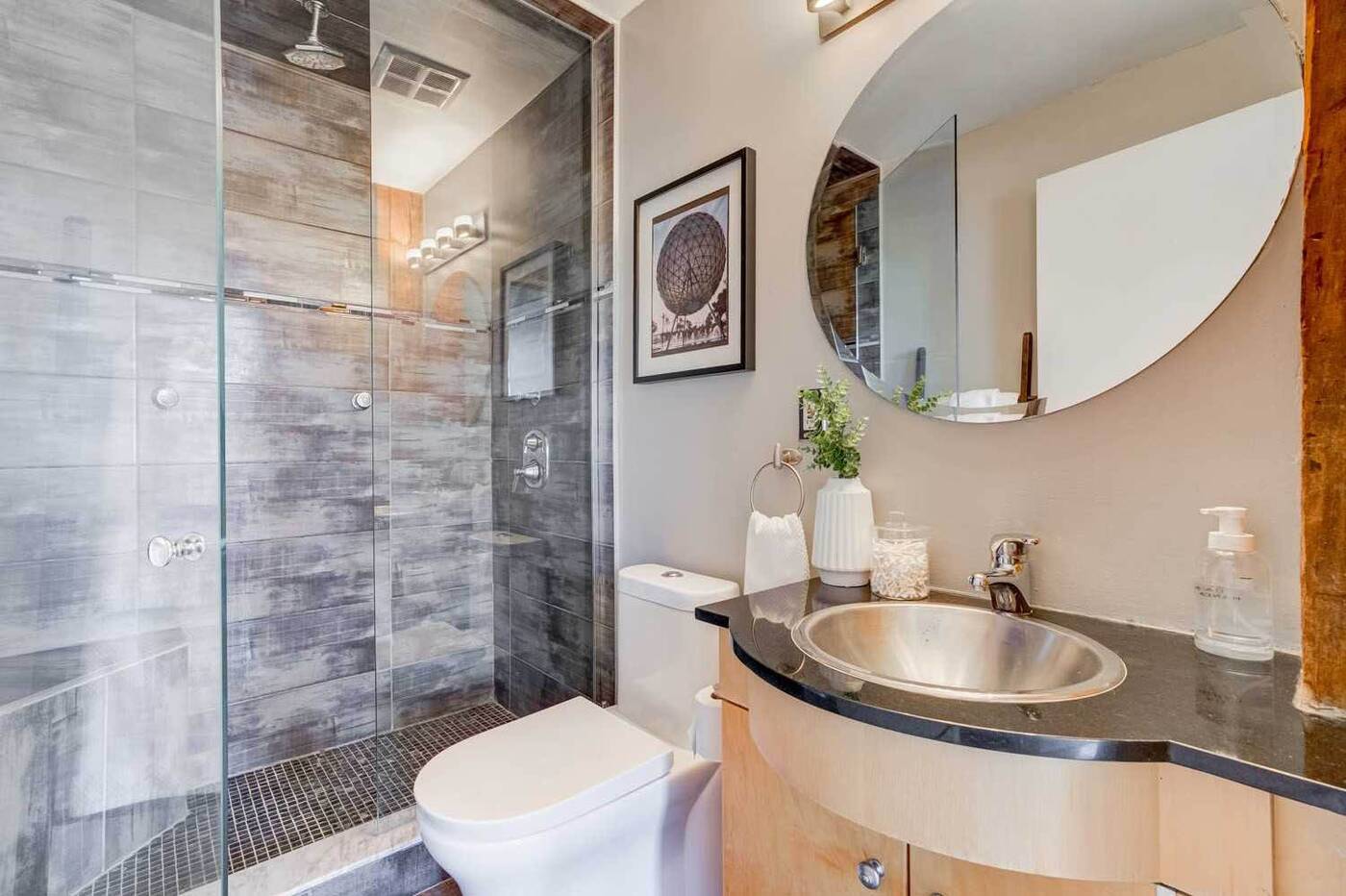 "[It's] steps to Parkdale restaurants. I lived a block away for years and you could eat a different type of food every night of the week. So many choices!" boasted Prior.