An enormous flying saucer has loomed next to the Highway 400 and Highway 7 interchange in Vaughan since 1999 when Famous Players opened their Colossus theatre in Toronto's 'burbs.

Now operated by Cineplex, the alien-themed theatre complex and its surroundings could soon be on the way out, with a plan in motion to redevelop the 25-acre property.

Along with the massive complex and its 19 movie theatres, the project from developer RioCan REIT would see the entire unenclosed shopping centre and parking lots — including a Bed Bath and Beyond, Marshalls, HomeSense, and several restaurants — demolished in phases to clear a path for a new mixed-use community.

Designed by Hariri Pontarini Architects, the redevelopment scheme (currently just concept renderings) involves a collection of buildings ranging in height from eight to 55 storeys, connected by a network of new streets and 4.8 hectares of parks and open space.

Vaughan would lose a suburban entertainment and retail complex barely over two decades old, but it would gain approximately 13,000 residential units while the new buildings would still accommodate plenty of employment on the site, projected to contain 1,788 people and jobs per hectare. 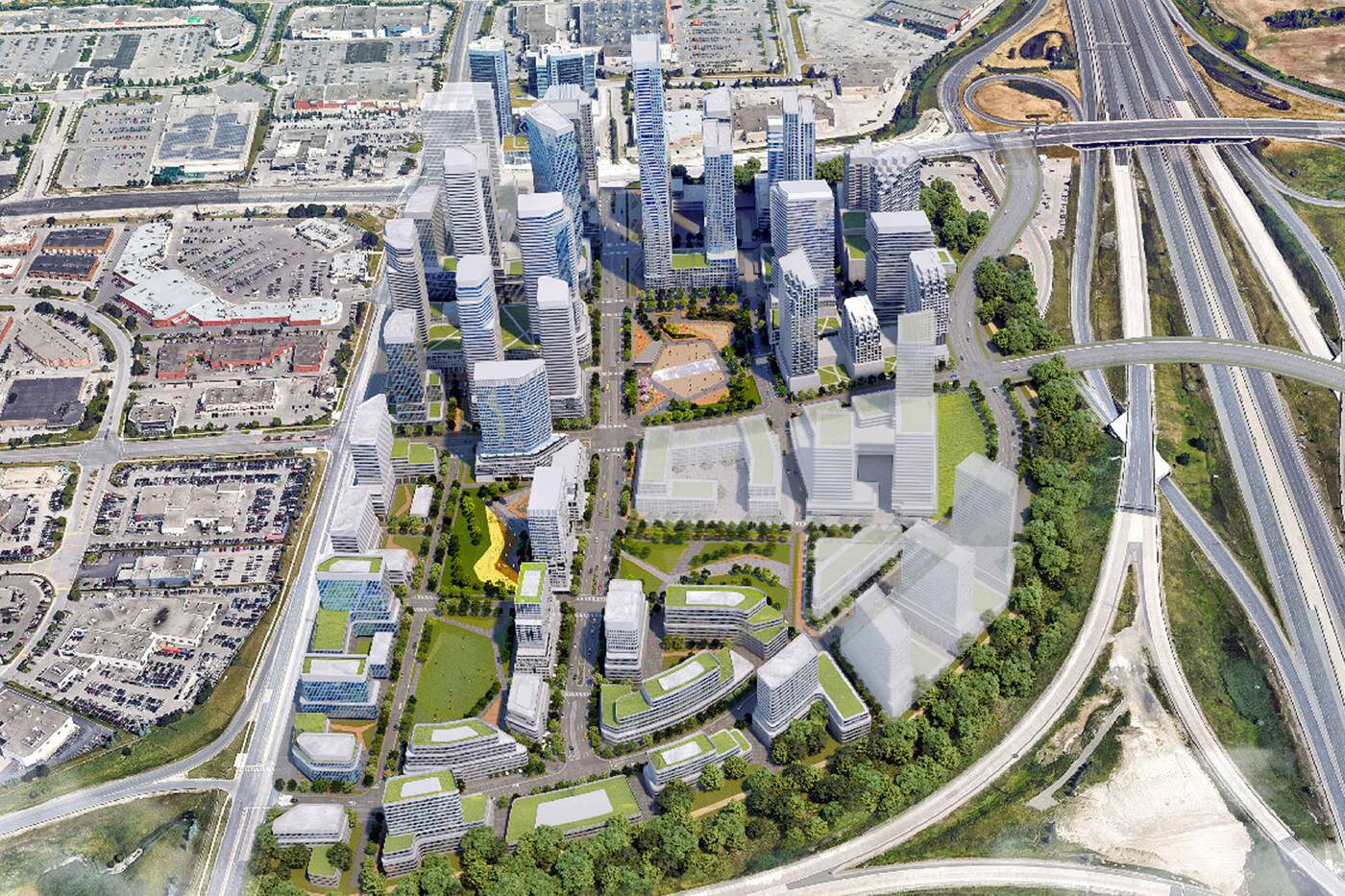 Aerial view of the new community planned for the Colossus Drive site in Vaughan. Rendering by Hariri Pontarini Architects.

The site master plan calls for three "precincts" in the north, southwest, and southeast. The tallest towers would be concentrated in the northern precinct against the growing spine of density lining Highway 7 through Vaughan's emerging downtown. 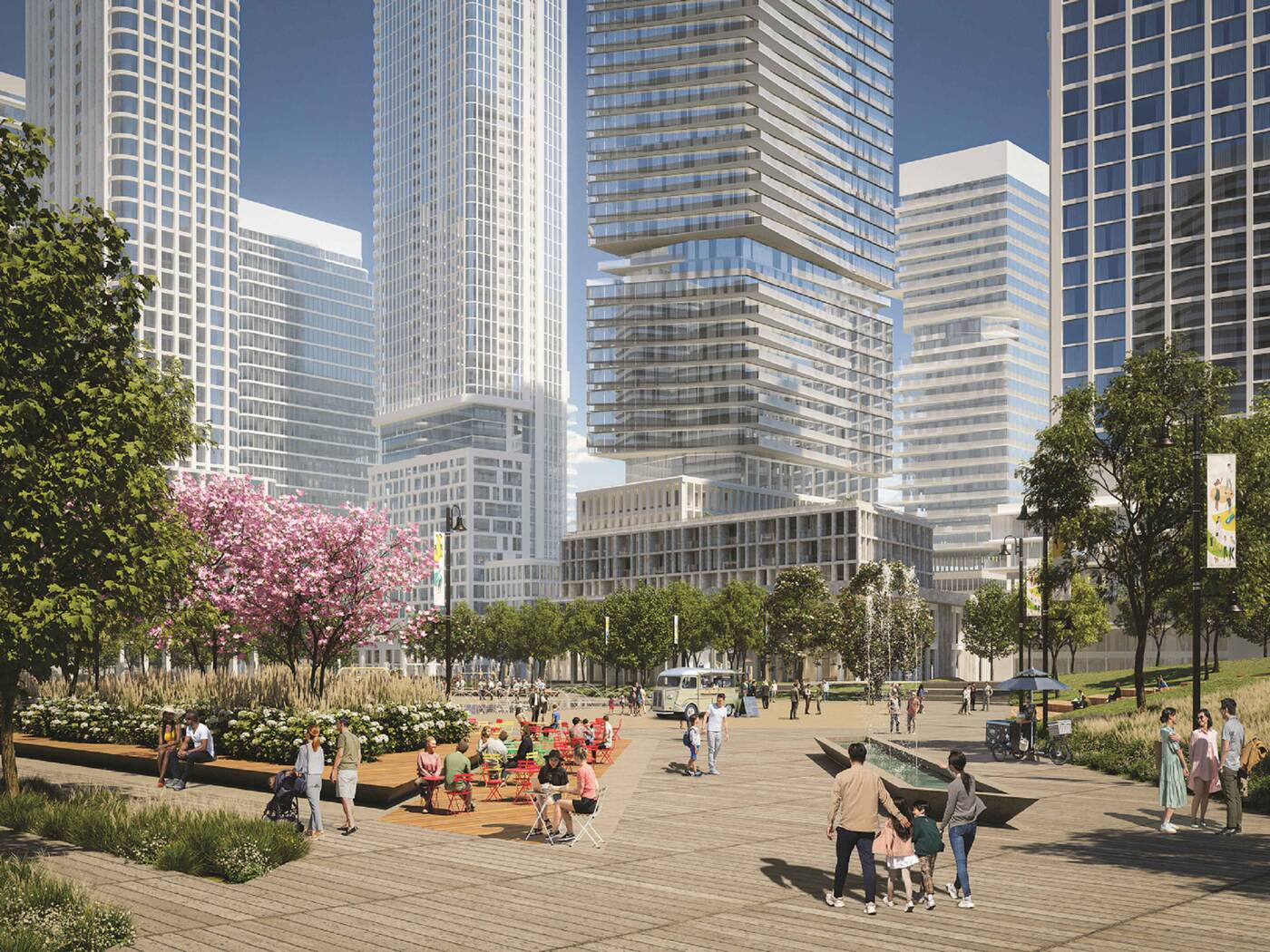 Such a large site can't be built out overnight, and RioCan appears poised to build out their land in phases, anticipated to begin with the northern precinct and the community's tallest towers.

The phasing of this first precinct will be planned to accommodate existing leasing obligations, so current businesses won't be sent packing unexpectedly. 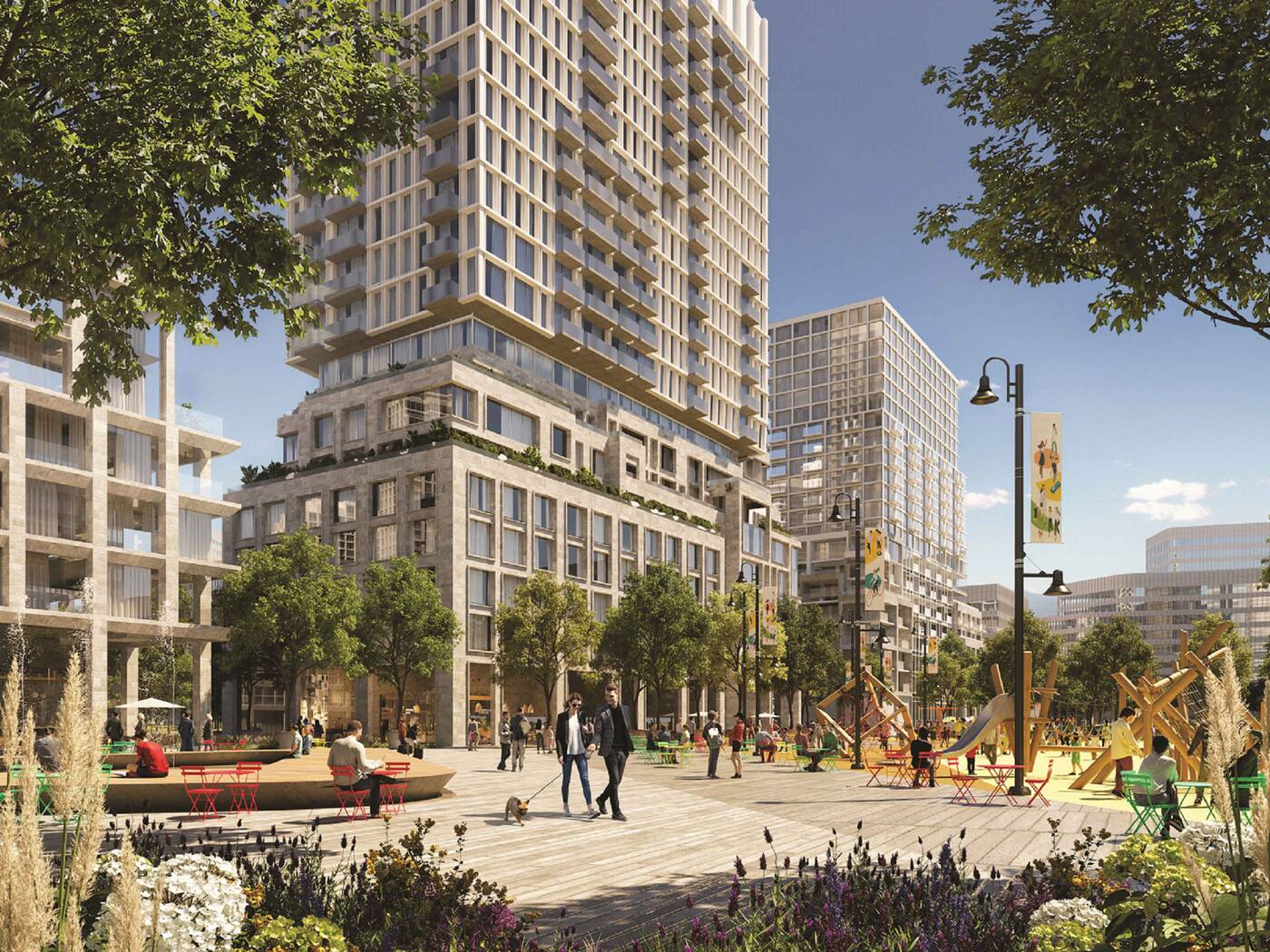 The southwest precinct is expected to follow as a longer-term project, with this portion of the site to house relocated retailer spaces in the interim, and double as a construction staging area during the build-out of the northern precinct. 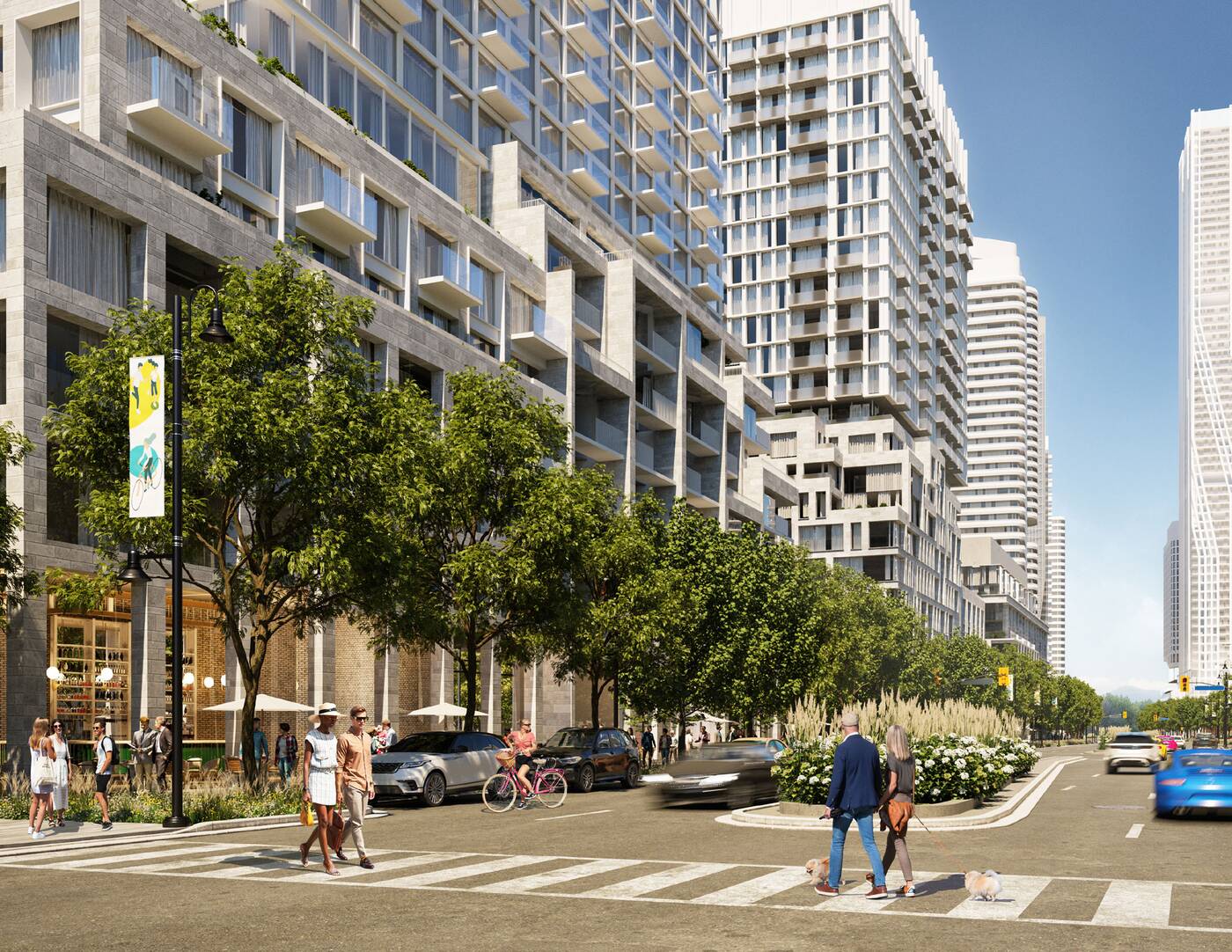 A new grid of streets will serve the planned neighbourhood. Rendering by Hariri Pontarini Architects.

At the site's southeast quadrant, the current Costco lands have been included in the master plan, but are not part of the RioCan-led proposal. 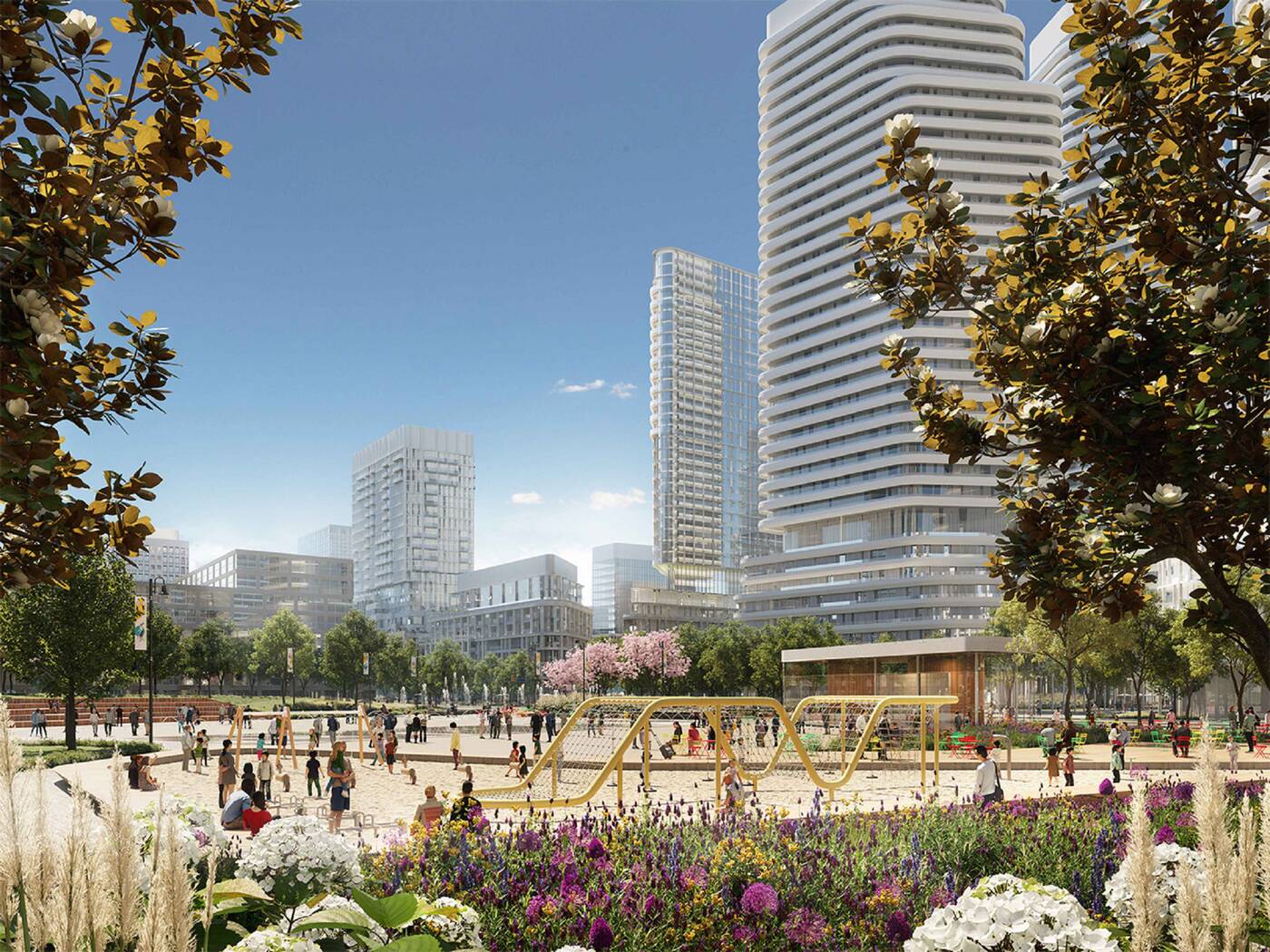 Colossus Park will be the community's central feature. Rendering by Hariri Pontarini Architects.

The two parties have worked collaboratively to come up with a cohesive plan for their adjoining sites. Similarly, the Petro Canada gas station at the site's northwest corner has also been included in the master plan.