This $4.5 million property in Ontario comes with its own private zoo

Monkeys, lemurs, leopards, zebras, buffalo, alligators, wallabies, lions wolves and more exotic species of bird than you ever knew existed could be yours for just under $4.5 million as part of a sprawling lakefront property with its own private zoo in Morpeth, Ontario.

I'm talking about Greenview Aviaries, a one-of-a-kind country park and zoo that anyone who grew up in Chatham-Kent can definitely tell you all about.

Situated along the shores of Lake Erie on 50 acres of lush rural land, Greenview Aviaries Park & Zoo has been a popular destination for family outings and elementary school field trips in southwestern Ontario since the 1980s.

It's a unique place with its own restaurant, a souvenir shop, a splash zone, a massive outdoor playground with zip lines, trampolines and ball pits, as well as a walkable miniature village and garden inspired by Shakespeare.

The main draw, however, is the more than 450 animals that call Greenview Aviaries home — whether they'd like to or not.

If you’ve ever wanted to say “we bought a zoo”, here’s your chance.

"Popular, 50 acre zoo west of Morpeth, Ont," reads the listing, which went live in early January. "Greenview aviaries is not just home to over 450 mammals, birds & reptiles, it is a thriving family owned & operated business with multiple income streams."

"Virutally everything on site is included in the purchase price, including a single family brick home w/atrium & metal roof, several outbuildings and so much more!"

Excited as some people might be by the prospect of buying the beloved park, animal rights experts are holding up the real estate listing as an example of how badly broken Ontario's laws are when it comes to governing the ownership of exotic animals. 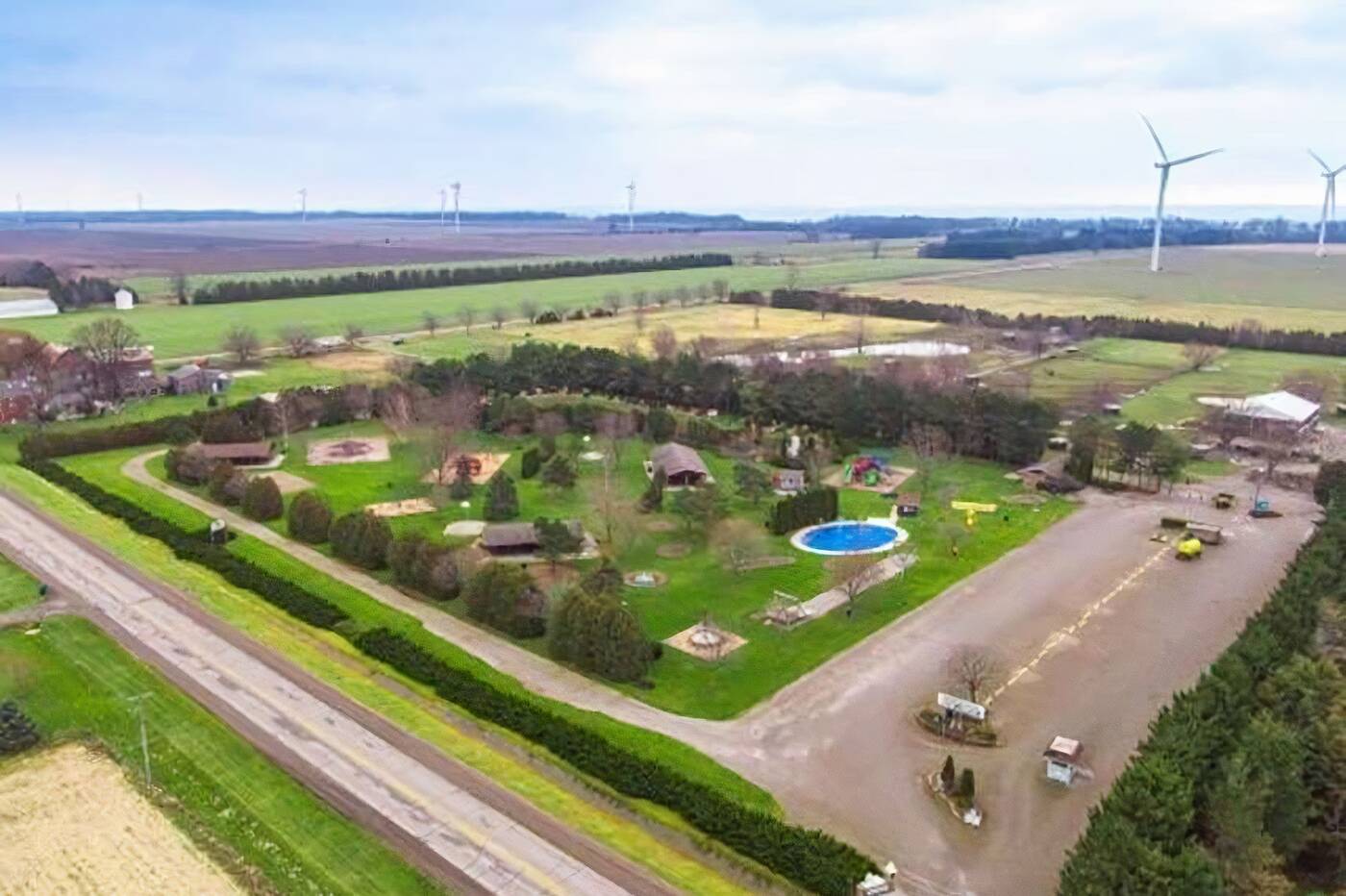 The sprawling 50-acre property has its own restaurant, gardens, massive playground, parking area, gift shop, a detached house and multiple animal care facilities around the zoo. Photo via realtor.ca.

In 2020, The Toronto Star reported that nearly 700,000 privately owned exotic animals are kept in this province alone, many of them as pets in private residences (sometimes with deadly results) and some in larger menageries.

This has led to a higher-than-normal amount of what experts call "roadside zoos" in the province.

More common in the U.S. than in Canada (think Tiger King), these facilities are defined by the Animal Legal Defense Fund as "small, unaccredited zoos where wild and exotic animals suffer in captivity."

"Roadside zoos are substandard zoological facilities that typically house animals in poor, barren conditions. Most lack trained professional animal care staff and the financial resources necessary to ensure proper animal care and housing," reads a 2005 report by The World Society for the Protection of Animals.

"Roadside zoos typically consist of a range of small, ramshackle cages that offer little more than a water bowl, food bowl and a shelter box for each animal to sleep in... Many of the practices, some of them quite cruel, which seem to be the norm in roadside zoos, would not be tolerated in professionally-accredited zoos."

This is not to say that Greenview is necessarily mistreating animals — only that it and facilities like it have been under heavy scrutiny for years among animal rights organizations in Ontario, particularly in light of the province's notoriously lax animal ownership laws.

As the only province in Canada without universal legislation on breeding or owning exotic animals, it's up to each municipality in Ontario to enact their own bylaws, and Chatham-Kent's are notably permissive.

"Unlike many other jurisdictions, in Ontario, non-indigenous exotic wildlife species are not regulated. Virtually anyone can acquire exotic wild animals, house them in conditions of their choosing and then open up for public viewing," reads a 2008 ZooCheck report on Greenview Aviaries in particular.

"There are no laws or regulations requiring the owners or operators of zoos to have expertise or experience in wild animal care, the financial resources to properly operate their facility or an ability to conduct their business in a humane and safe manner."

To see the whole place go up for sale to anyone with enough cash has proven concerning among activists who say this could threaten the health and safety of both humans and animals.

Why the sale of this private zoo and its animals in Ontario is ruffling feathers | CBC News https://t.co/Njvb0Xx2XS

"Anyone can buy this. They don't have to have any training or understanding of the biology of the animals nor how to manage them."

Politics and hazards aside, the property at 12734 Talbot Trail is truly spectacular, with or without captive animals.

Maybe someone will buy it to build a mansion and make for one less roadside zoo in the province. Maybe a skilled veterinarian will buy the place and continue to care for its many creatures.

Either way, 50 acres of land on Lake Erie is sure to draw some interest at $4.5 million — a relative steal compared to what similarly-sized parcels of land go for in Toronto.