Ryerson University wants to build the first 100 per cent, digitally-enabled building in the world, only to disassemble in the years to come. Maybe.

Detailed back in March in a funding announcement, the Ryerson University Smart Campus Integration and Testing Hub (SCIT Hub) would "enable the exploration and testing of 'smart building' products and management strategies" that could help in offsetting climate change.

A new application submitted with the city is offering up new details of the SCIT Hub, part of a complex Ryerson is planning at 136 Dundas Street East, on the northwest corner of Dundas and Mutual Street. The site has been mostly vacant for years, currently home to a temporary research trailer and a concrete pad used for an earlier Ryerson research project. 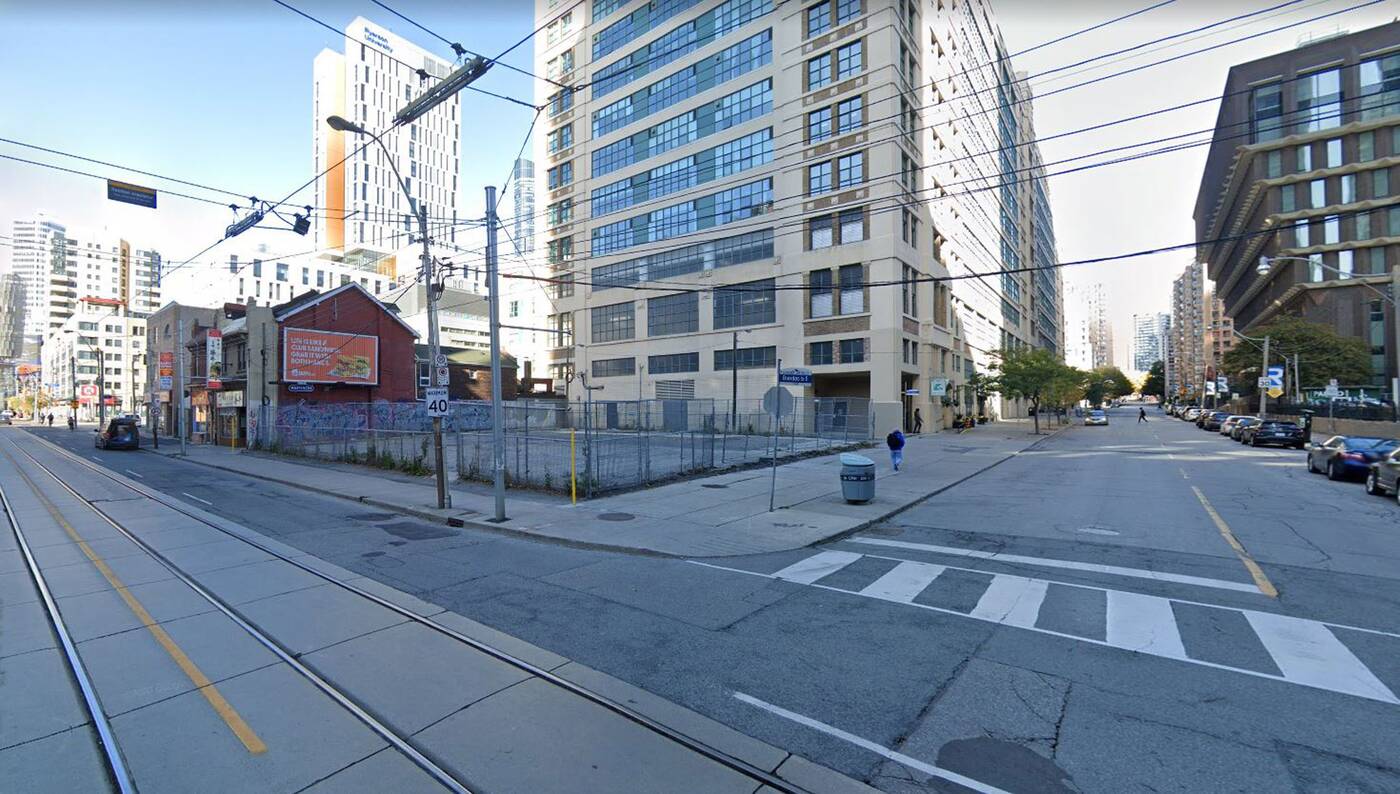 Looking northwest across Dudas Street East towards the site of the proposed temporary buildings. Photo via Google Street View.

The trailer would stay and be joined by two new temporary buildings: A two-storey mass timber structure would wrap around the southeast corner of the site in an L-shape, to be used for the SCIT Hub, and a separate three-storey research building would rise to the west.

Designed by WZMH Architects, the SCIT Hub will include a laboratory — including a smart home mock-up, workshops, and test areas — looking at forward-thinking technologies, with studies led by Ryerson architectural science professor Jenn McArthur.

"It's designed to be the world's first 100 per cent digitally enabled building," said McArthur back in March. "This facility is designed to serve as a model for what sustainable construction can look like beyond 2030."

"We're aiming for net-zero carbon over the life cycle of the building and to really use it as an opportunity to showcase the state-of-the-art technologies that we need to mitigate climate change," continued McArthur.

Some pretty impressive technology would be used to accomplish this ambitious goal, including experimental systems like "intelligent structural panels" that function like plug-and-play smart tablets you can walk on, and plenty more sci-fi-feeling features.

Development on this site is limited due to height restrictions set by the Merchandise Lofts building directly to the north.

A representative of WZMH tells blogTO, "Ryerson University, given its urban condition, has significant challenges of finding available land for development. Given the height restriction and size of parcel, the site was chosen for research initiatives of a smaller nature to support Ryerson Architectural Science and potentially other departments."

And despite all the high-tech planned for the SCIT Hub, Ryerson and WZMH confirmed to blogTO that the facility has been "designed for disassembly, should this ever be required."

Ryerson states that it has no plans to demolish the building, though there would be little reason to apply for a temporary building if redevelopment wasn't being considered down the road.