The Atrium on Bay complex in downtown Toronto could look a lot different in the years to come, a new application submitted with the city revealing plans to bring a dramatic residential tower to the site near Yonge and Dundas.

Proposed by a company with an address leading back to developer KingSett Capital, the application intends to bring a 34-storey rental apartment tower to the northeast corner of the complex, rising above the corner of Yonge and Edward from the current site of retailer West 49. 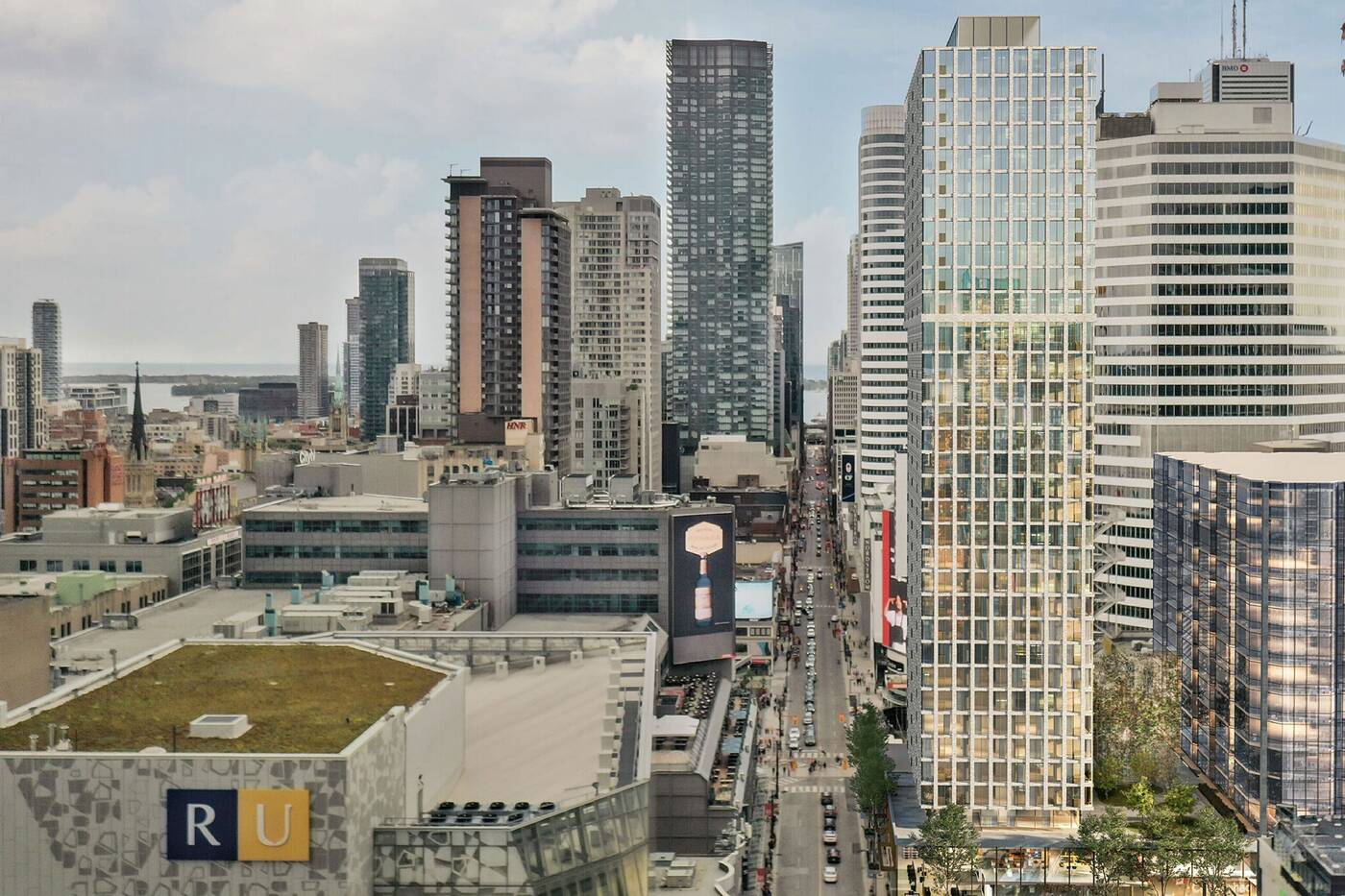 Looking south over Yonge Street, with the new residential tower on the right. Rendering by Hariri Pontarini Architects.

A redevelopment of the 40-year-old mall and office block has been in the works for close to a decade, though earlier plans focused on expanding the office and mall components, including added height for the complex's existing 13- and 14-storey office towers.

The current plans would retain the existing office, retail space, and sci-fi-looking atria, focusing instead on bringing a permanent residential presence to the complex.

The Atrium on Bay looks like a spaceship in our photo of the day. http://t.co/9RUJNyZS2L pic.twitter.com/EfUwchrXzD

Designed by Hariri Pontarini Architects, the building would rise almost 114 metres tall. This is proposed pretty much right up to the maximum height possible for this site. Anything even just a few inches taller would encroach on the helicopter flight path of The Hospital for Sick Children, grounds for a proposal to (no pun intended) be immediately shot out of the sky.

Down at street level, the tower would meet the intersection of Yonge and Edward with a two-storey base. A planning report states that this base is intended to "maintain the continuity of Yonge Street's historic two-storey main street character."

The proposal would maintain and improve the site's concourse connection to the PATH system and access to Dundas subway station while creating new retail opportunities near one of the most high-traffic intersections in the country.

Looking southwest across Yonge Street to the base of the new residential tower. Rendering by Hariri Pontarini Architects.

Three new retail units would be constructed, including a large space fronting Yonge and Edward that connects to the retail concourse below grade.

A smaller retail unit would be located along Edward just west of Yonge, while another space would be situated on the interior, with frontage along the mall's Yonge Street access corridor. 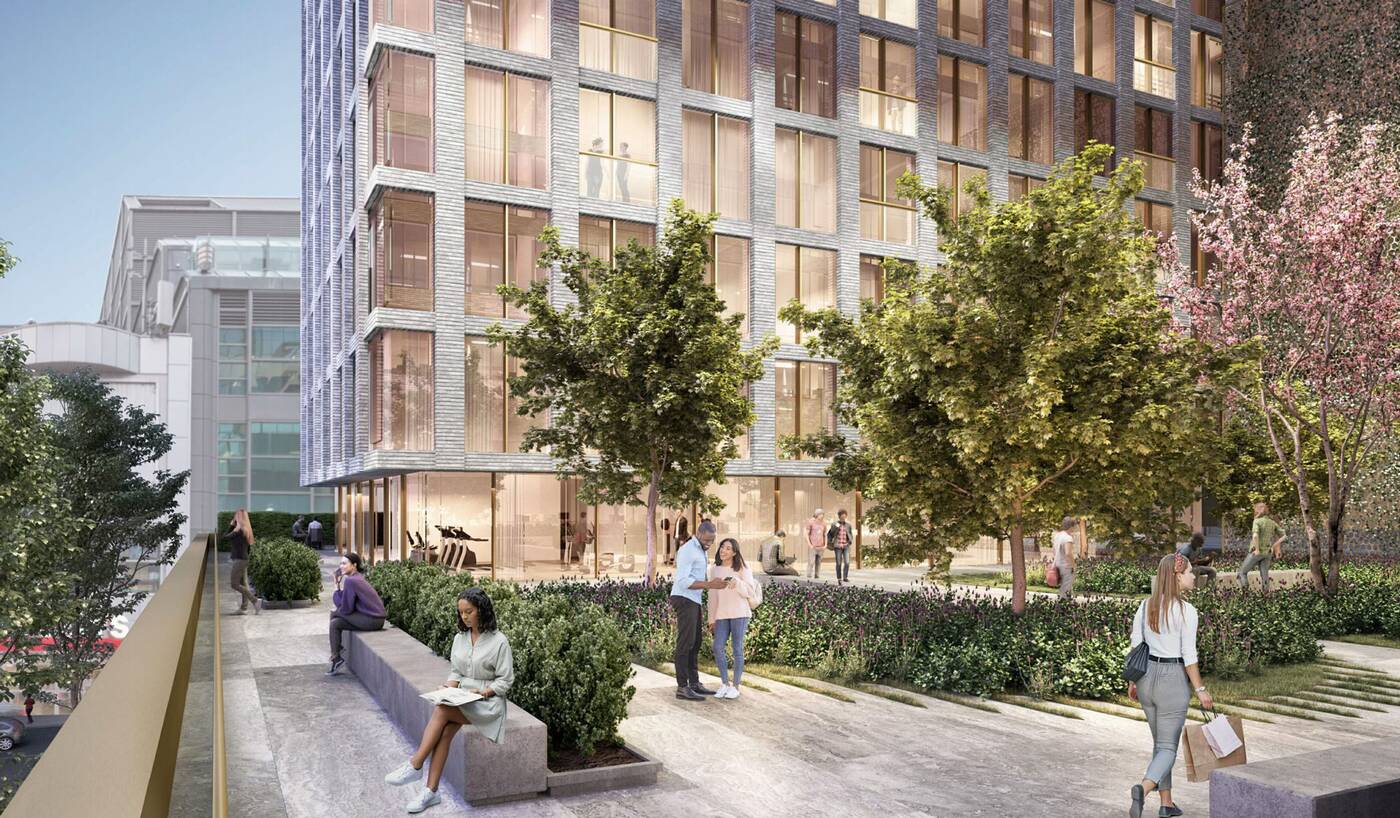 Residents of the tower would have access to an elevated amenity deck overlooking the hustle and bustle of the Yonge-Dundas area. Rendering by Hariri Pontarini Architects.

Things get a bit more interesting higher up, the tower's south side jutting out with a dramatic cantilever at level 24. These upper floors will extend over nine metres, floating 15 metres above the top of the prominent media tower at 304-306 Yonge Street. 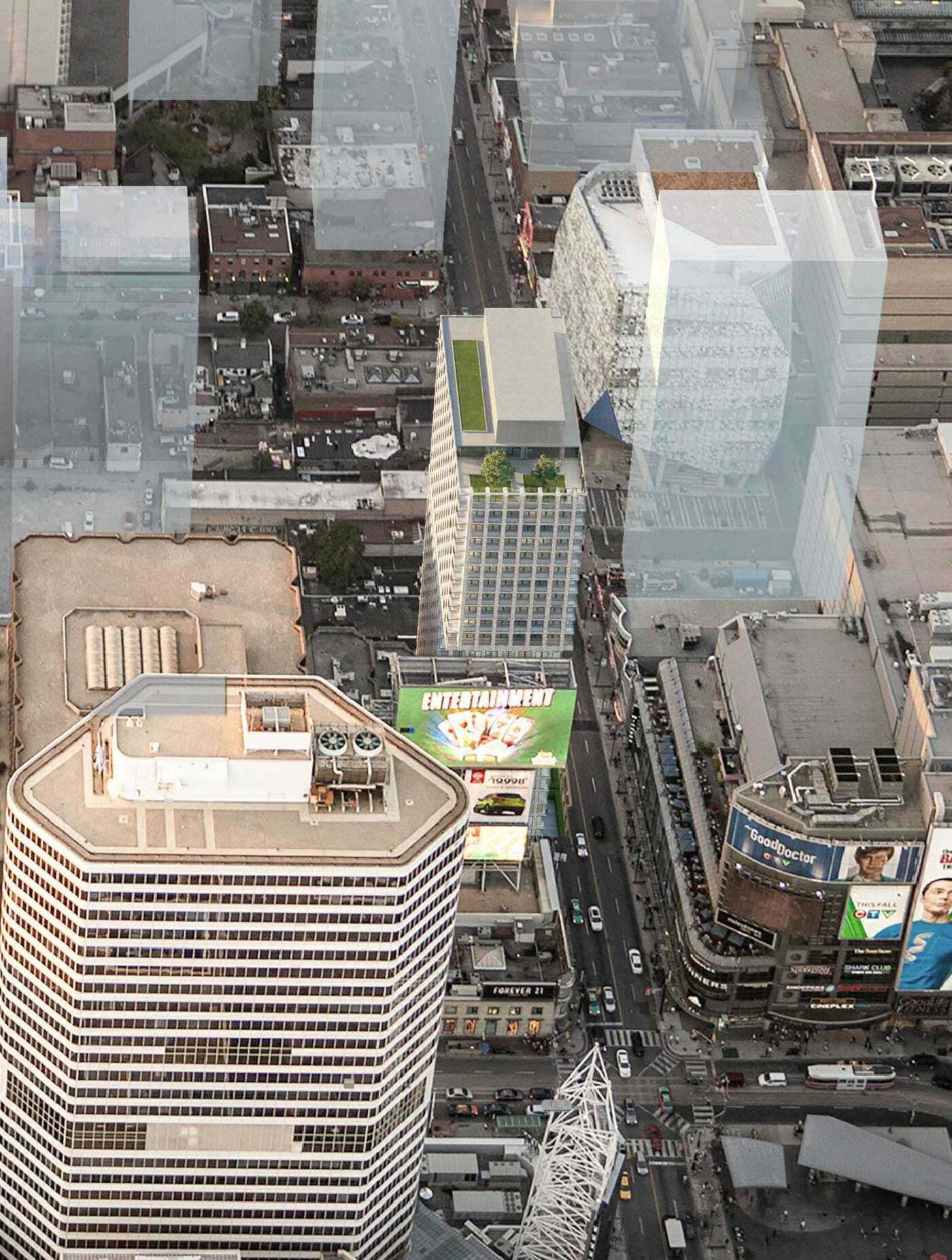 A dramatic cantilever would hover above the large media billboards above the northwest corner of Yonge and Dundas. Rendering by Hariri Pontarini Architects.

Imagine trying to get a good night's sleep living on the south side of the 24th level and knowing there are just a few inches of concrete and rebar between your floor and the void below.

While renderings make it seem like there would be rows of windows facing directly into the media tower, false, opaque windows are actually planned for this south facade. This would keep the design consistent without having to place residents right in the face of a colossal glowing sign.

No condos are in the mix here, with plans instead calling for 317 desperately-needed purpose-built rental units.