Mississauga castle house is for sale for $4.5 million

Arguably one of the most famous houses in Mississauga, 1357 Mississauga Road is a sight to behold with everything from grumpy gargoyles to secret passageways.

The home was inspired by the "Mad" King Ludwig's Bavarian castle –Neuschwanstein Castle. Or if you're not familiar with the German landmark you might see similarities with Cinderella's castle at Walt Disney World in Orlando, Fla. 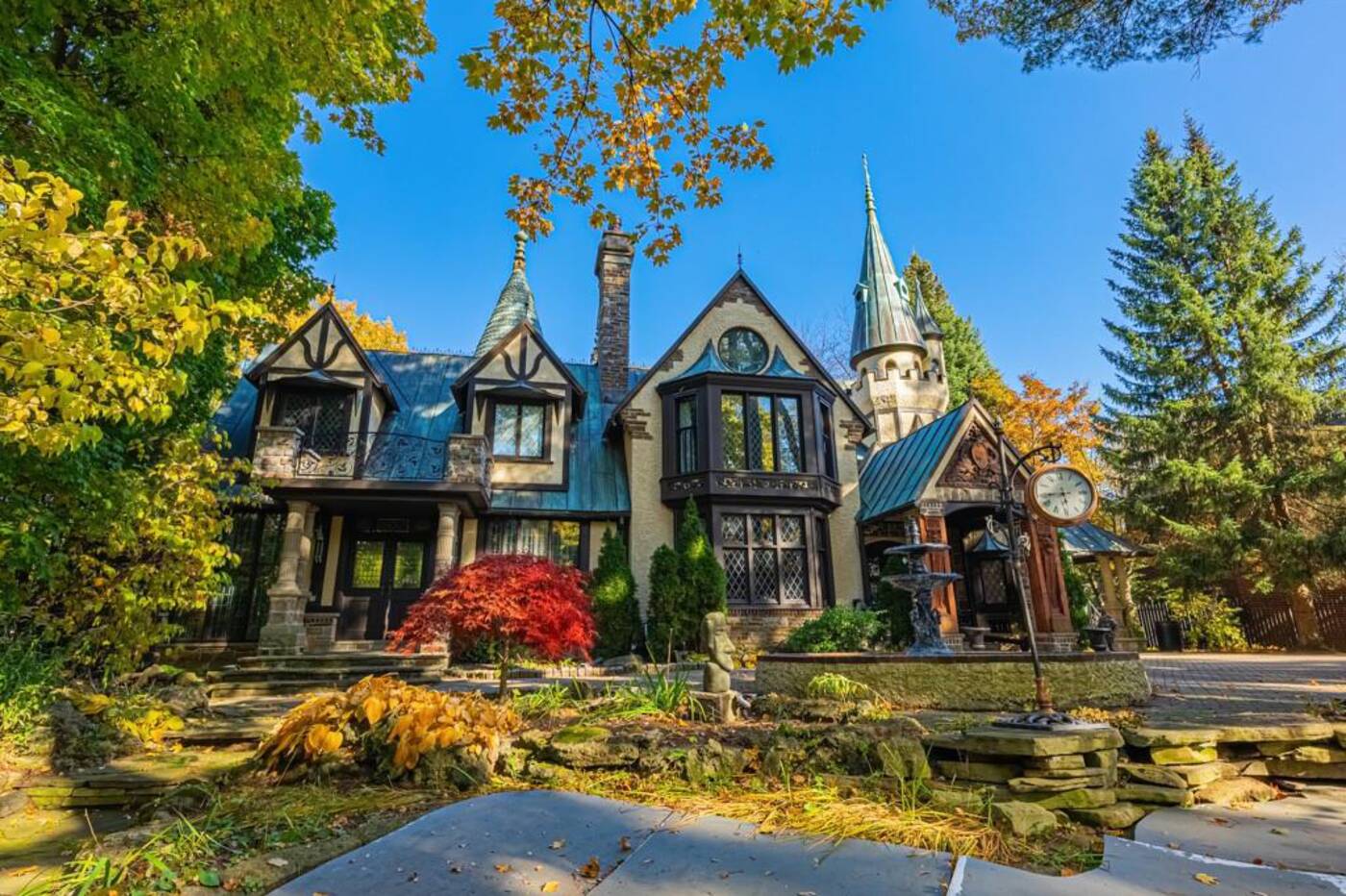 A view of the front of the house with a stone patio.

Set back from the road on a half acre property with plenty of mature trees, you'll just catch glimpses of this magnificent homes. But once you get up close the first thing you'll notice are the spires and peaked roofs that echo the German castle. 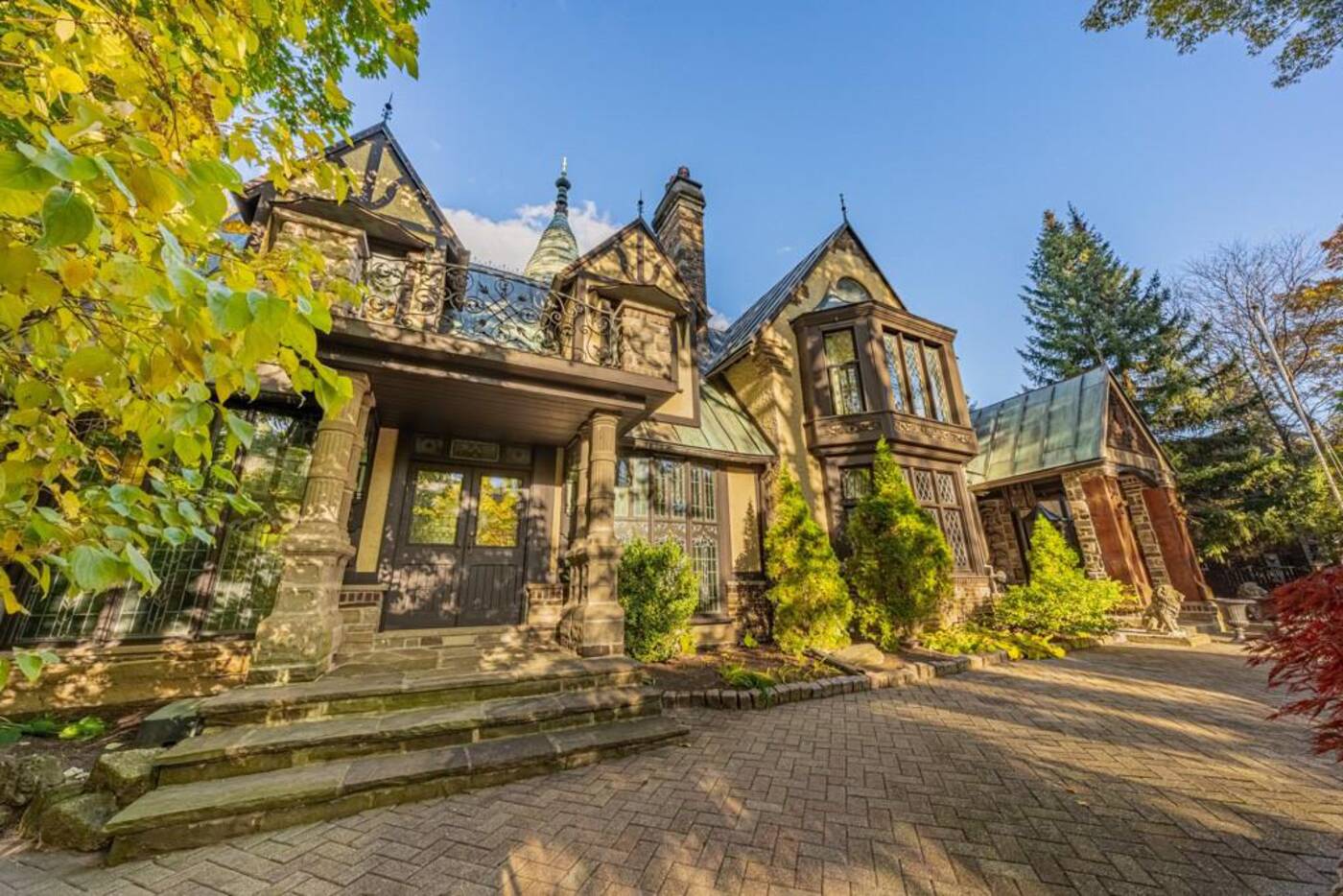 The large bow window jutting out over the front entrance is also a nod to the medieval palace. 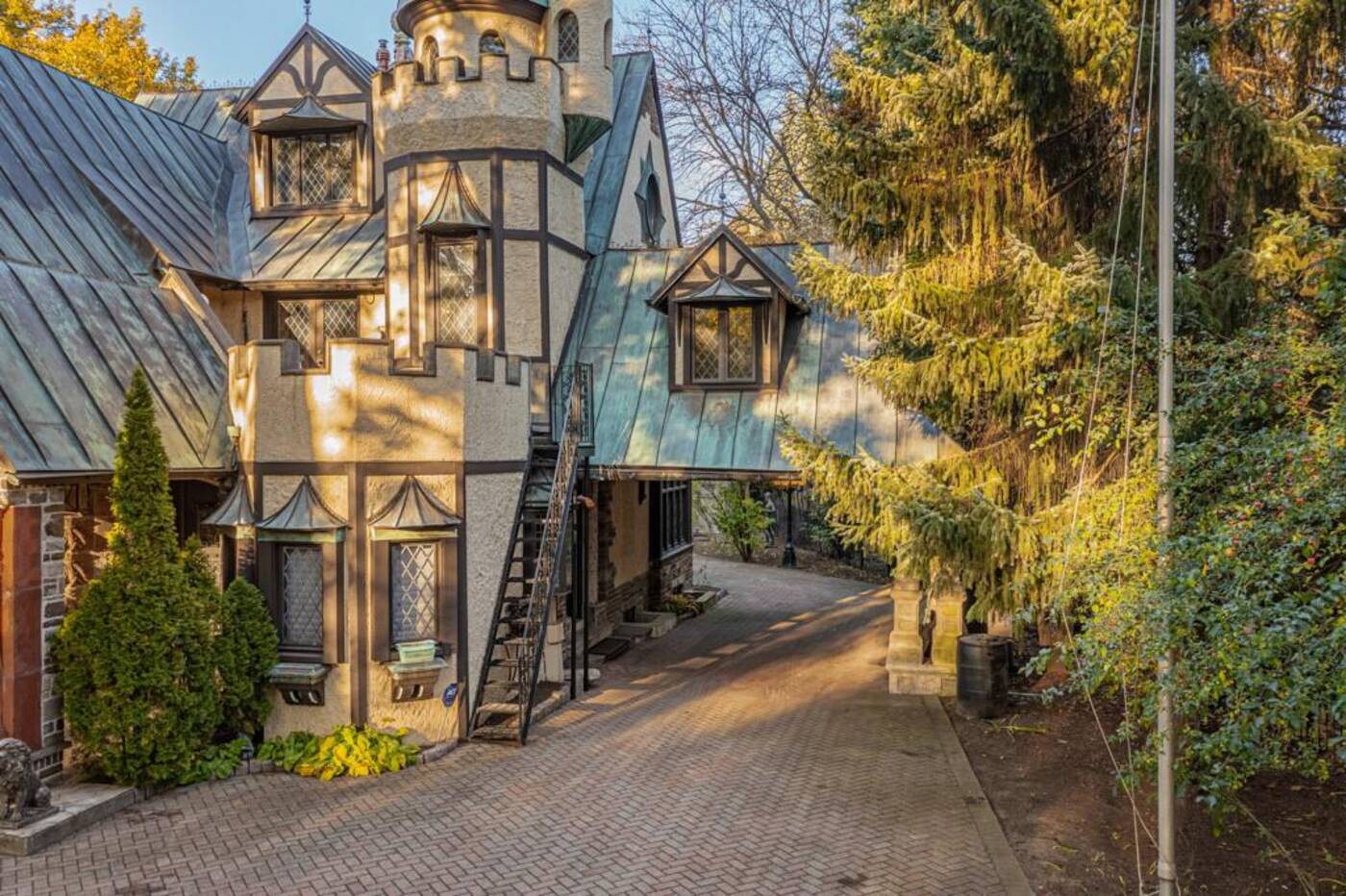 A turret and a closer look at the copper roof.

You'll also probably notice the roof, which according to an article in The Globe and Mail, is made entirely of copper and was cut and welded on site. 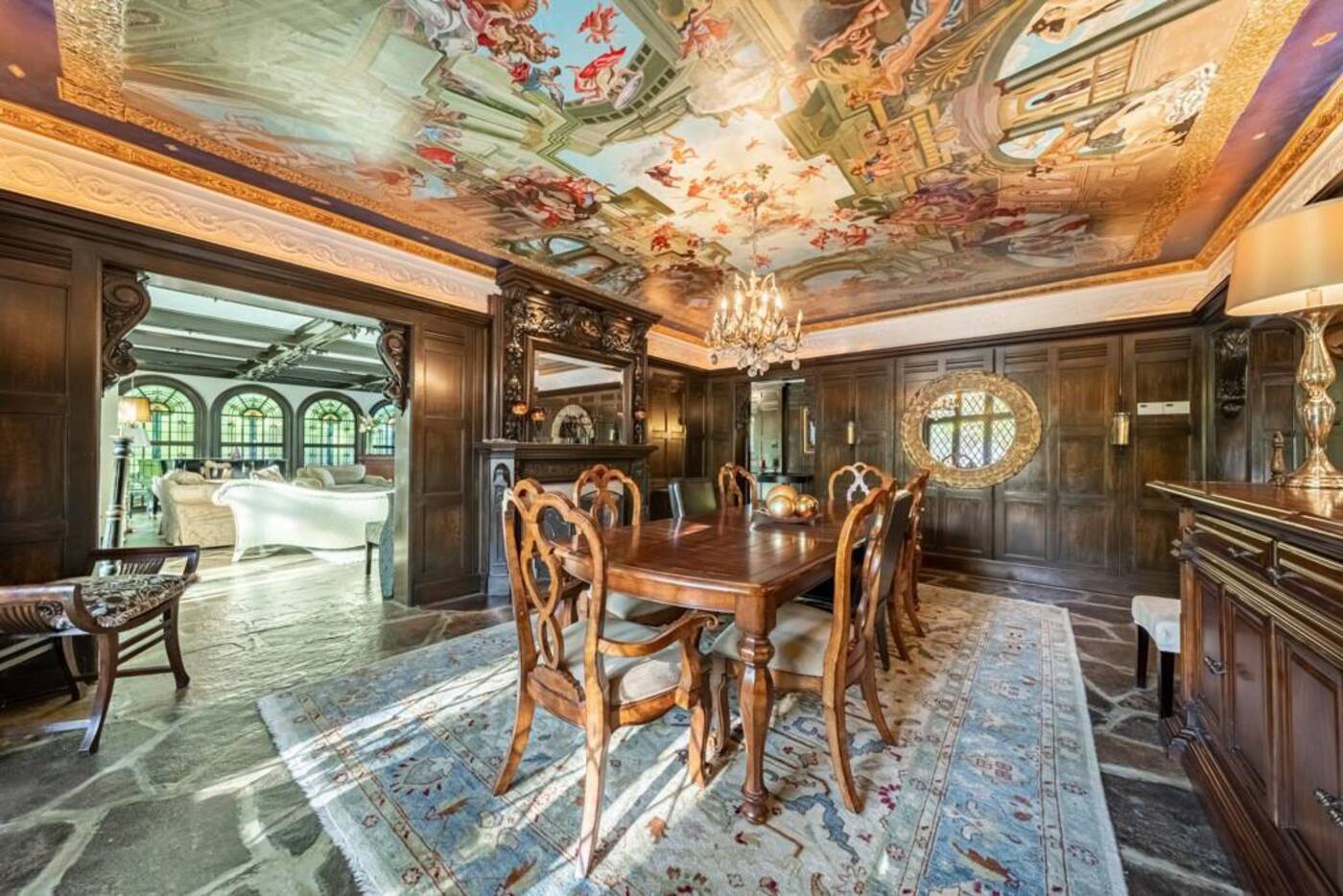 The dining room with a painted ceiling mural.

Inside the home is no less magical than the exterior. 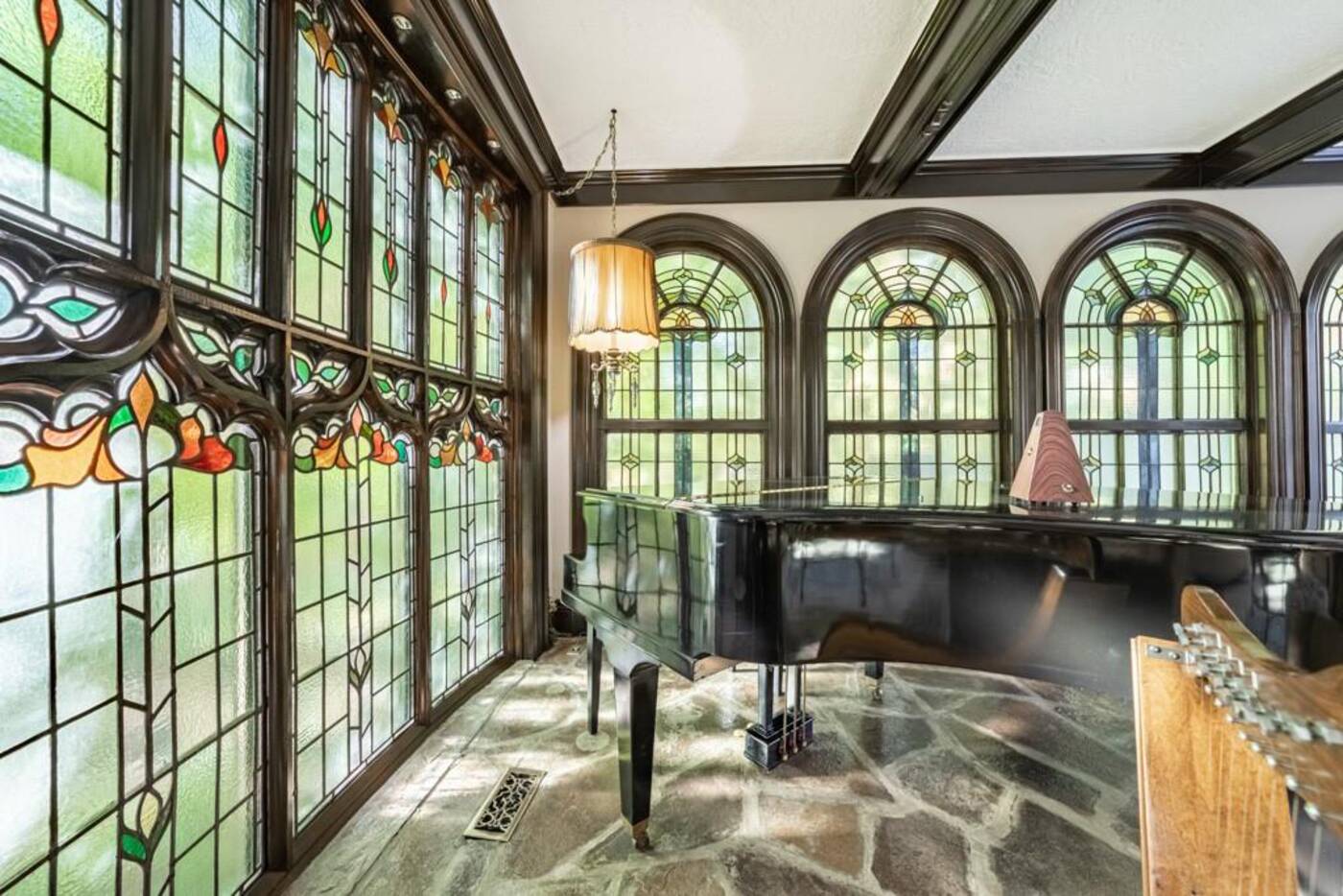 There are murals, stained glass windows, and figures carved into the wood throughout the house, in particular dragons are a recurring theme. 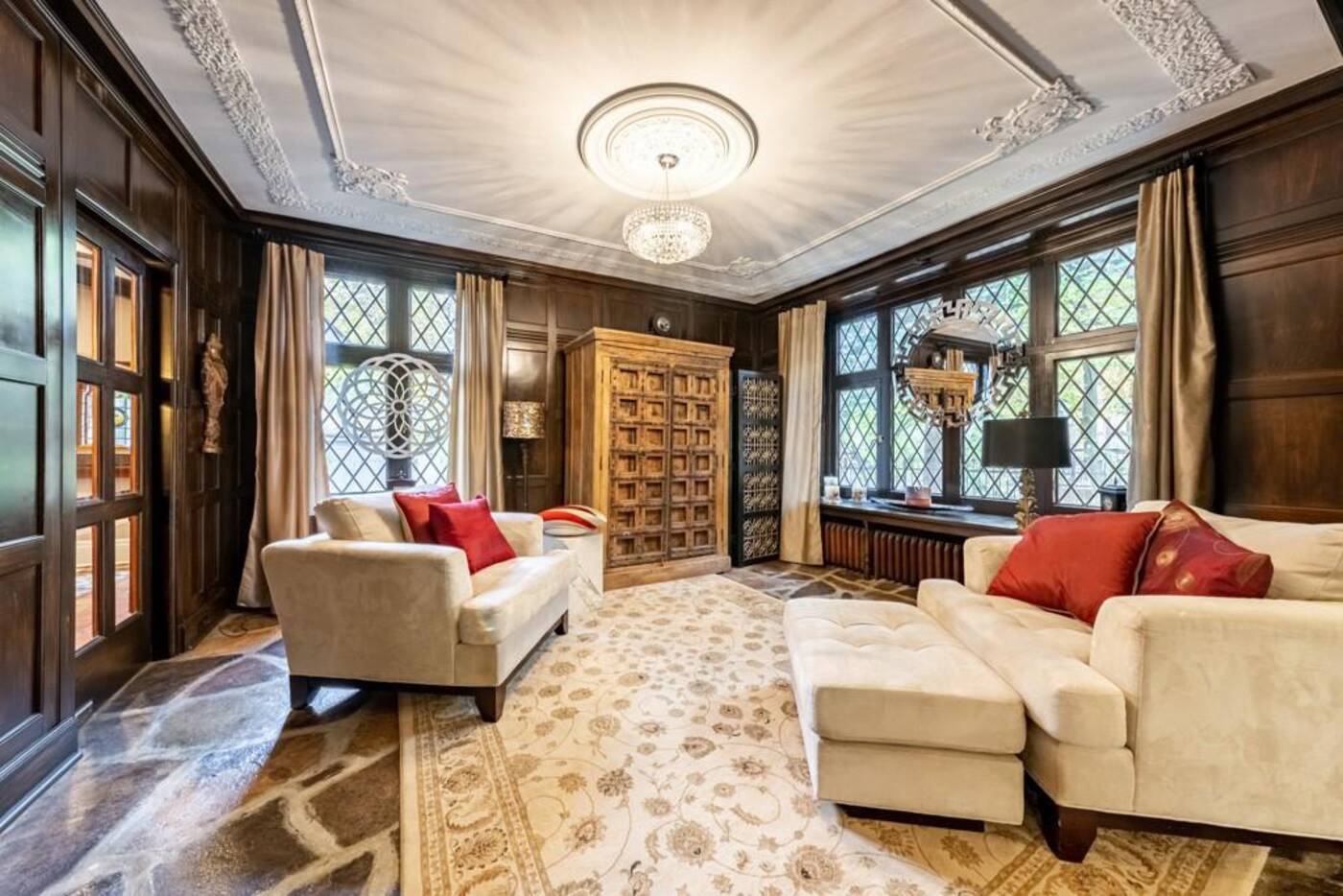 A sitting room with wood panneled walls and leaded windows.

The large principal rooms make you feel like you stepped back in time and travelled to another country. 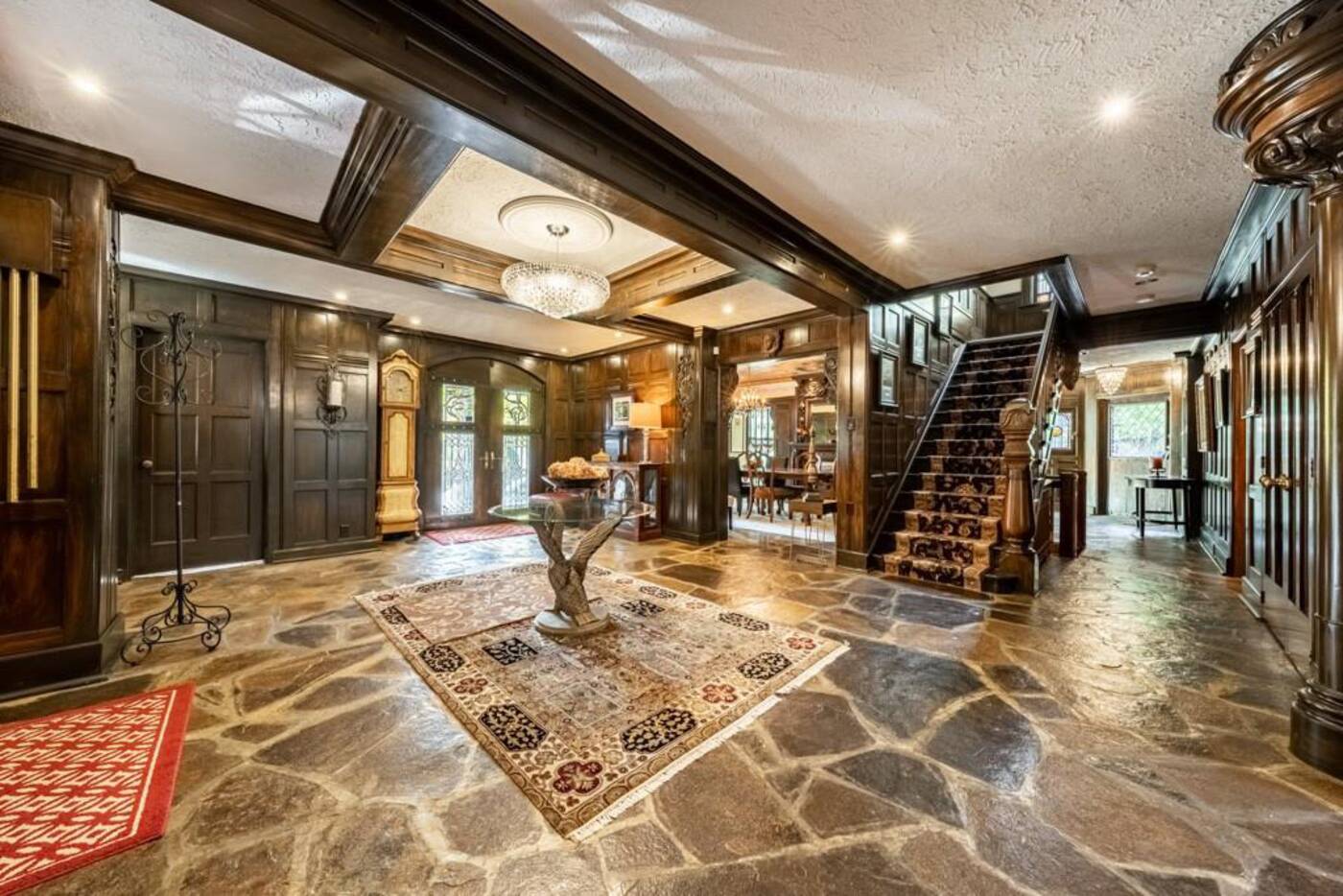 Everything about the home is over the top and dramatic, which may explain why it's been featured as the backdrop of a number of movies and television shows, including Goosebumps. 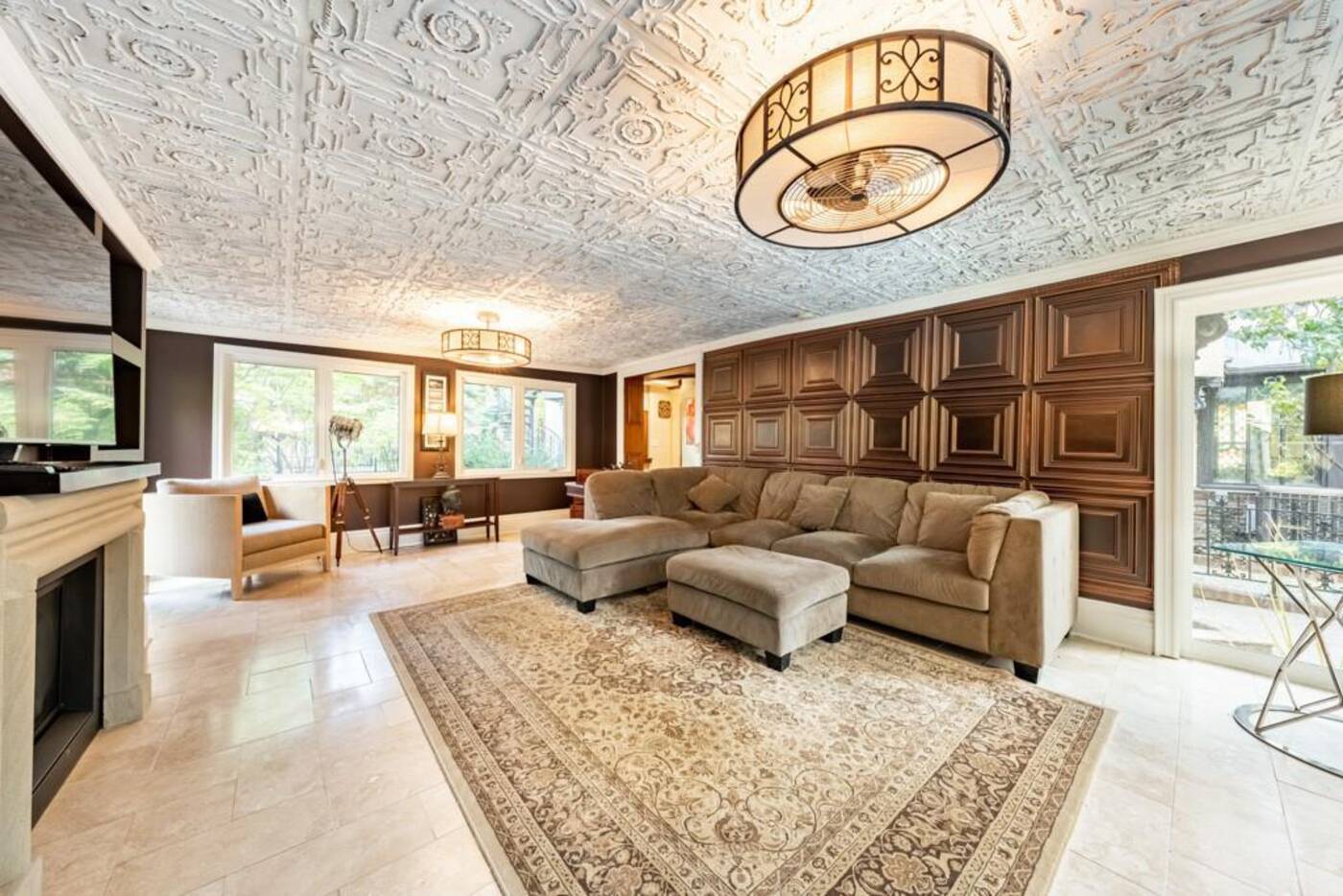 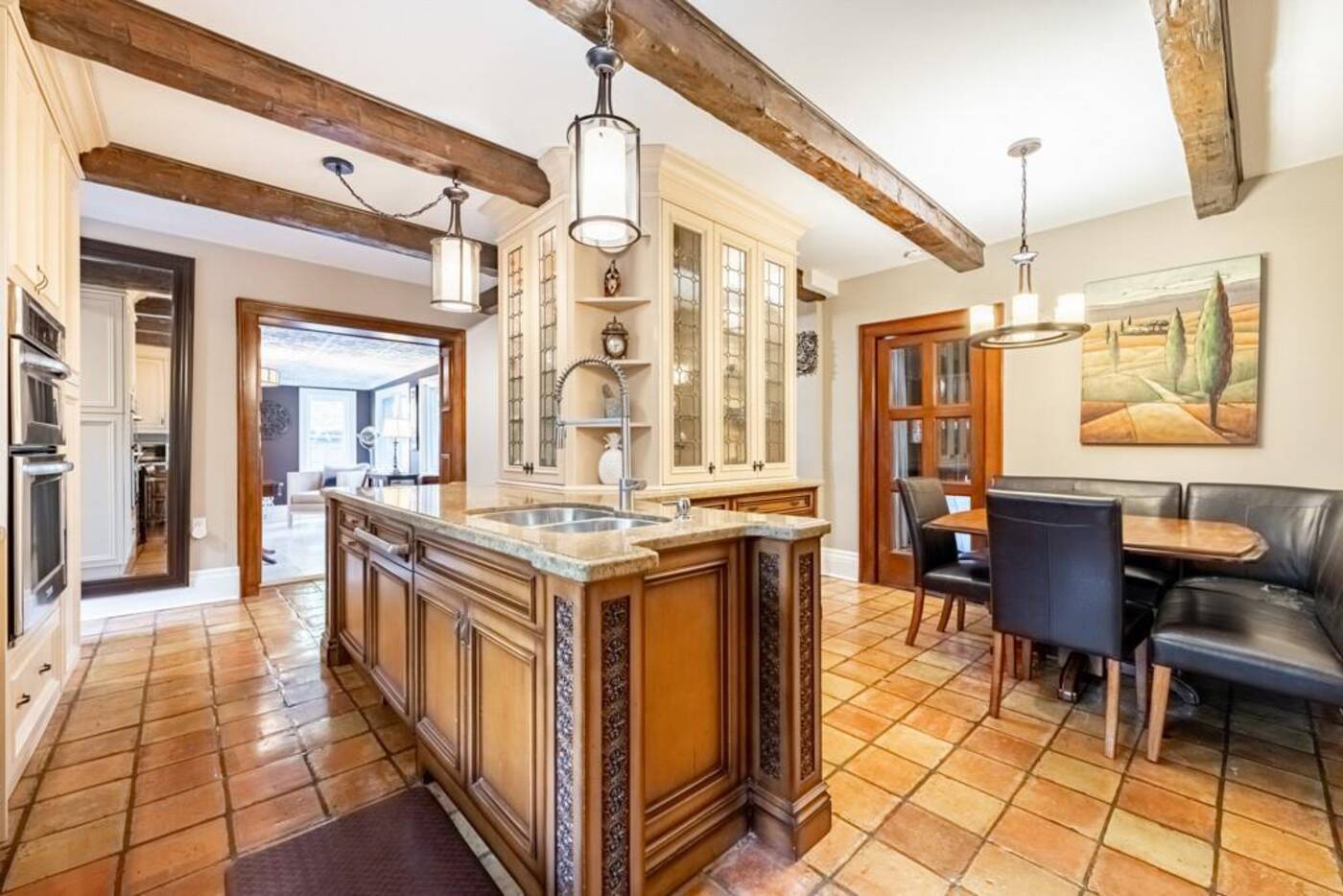 The kitchen has granite counters and integrated appliances.

The kitchen has a beamed ceiling that makes it seem like this home was built back in the 19th century. 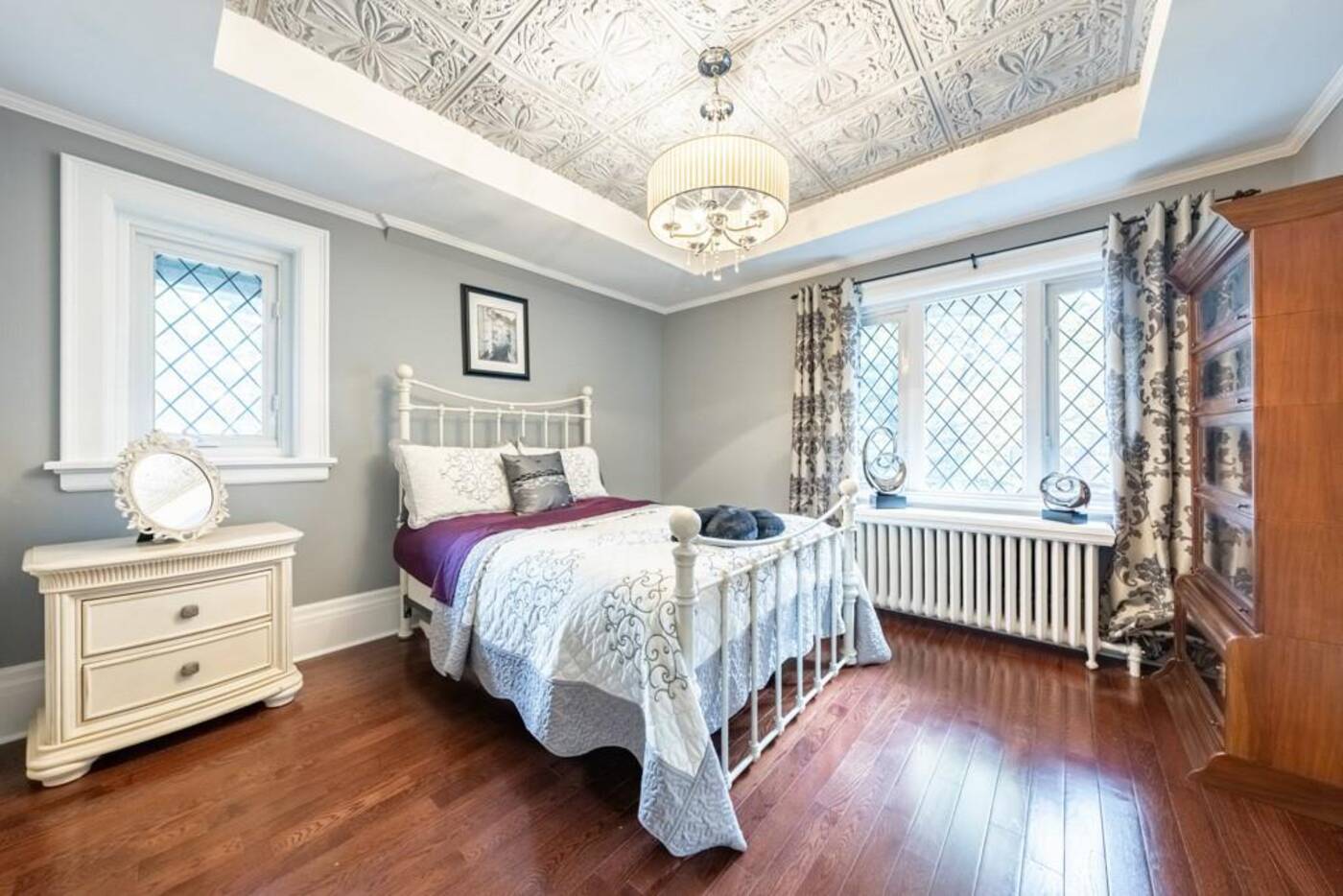 A bedroom with ornate ceiling panneling. 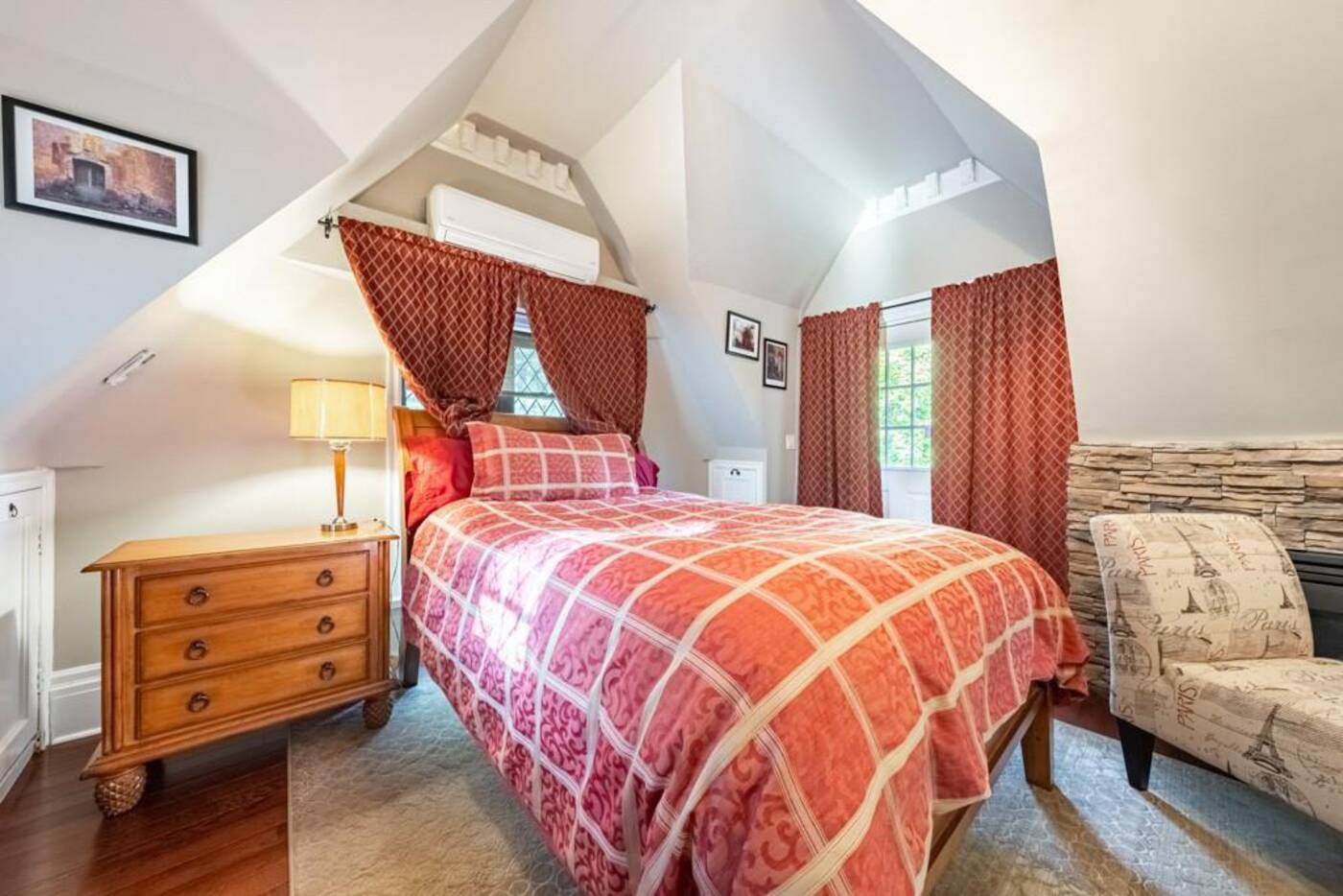 Another bedroom with a fireplace.

Each bedroom suite has a sitting room, bathroom and veranda. 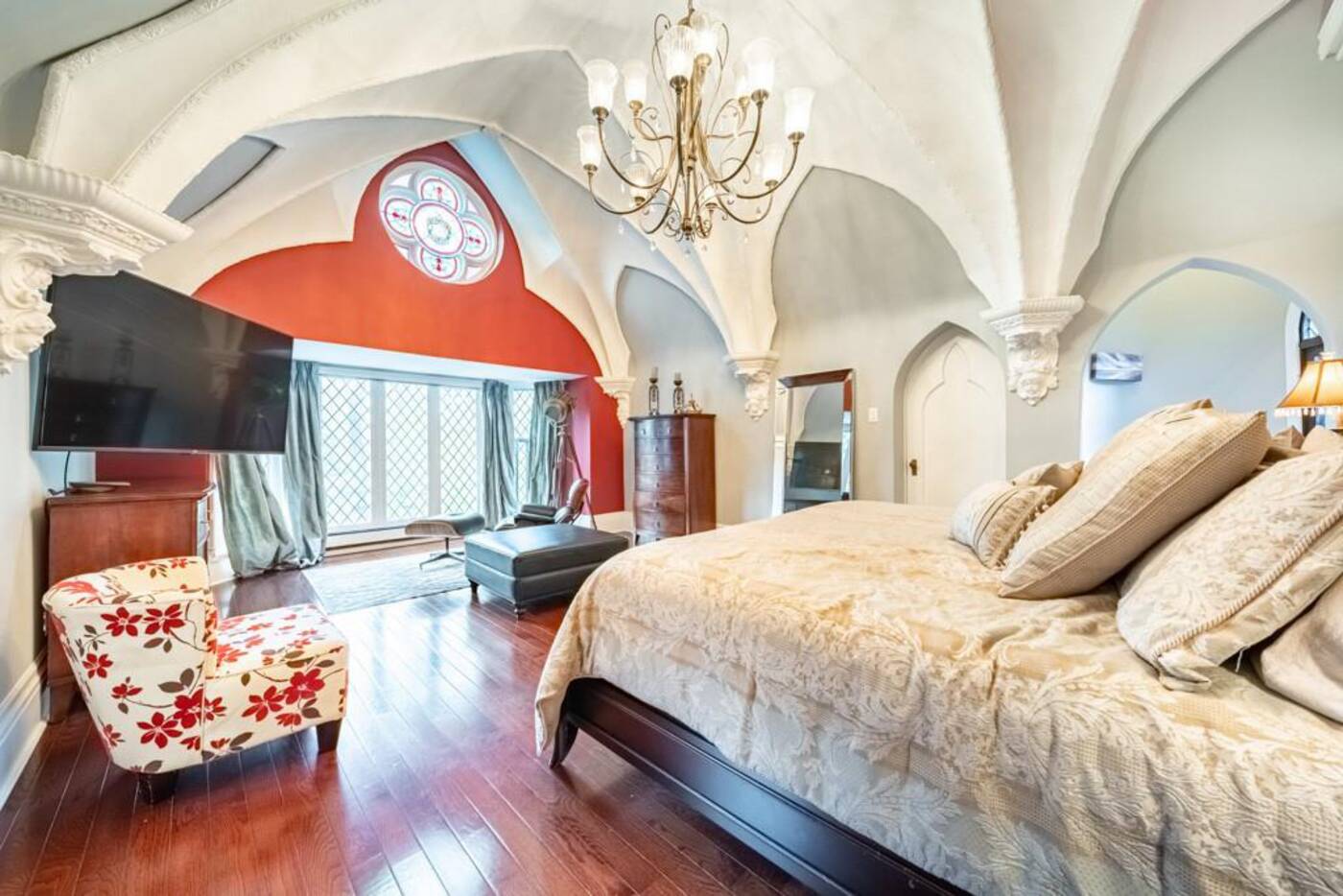 The primary bedroom with arched doorways and leaded windows.

The most stunning room is the primary bedroom that has cathedral ceilings that rival many chapels. 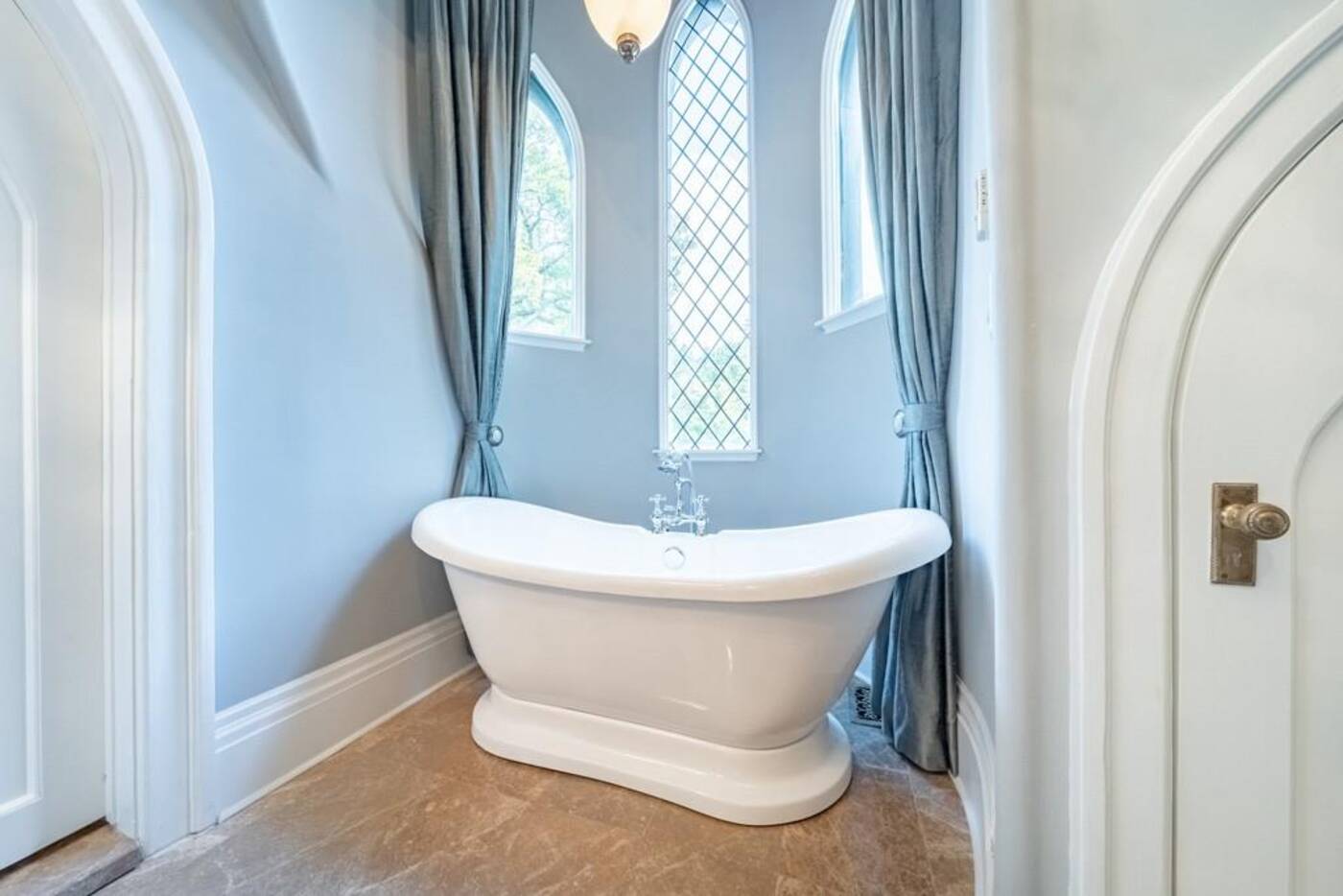 A spa-like soaker tub in the primary ensuite bathroom.

It also features a six-piece ensuite bathroom that includes a marble-clad tub, and a dressing room with a walkout to a veranda overlooking the pool. 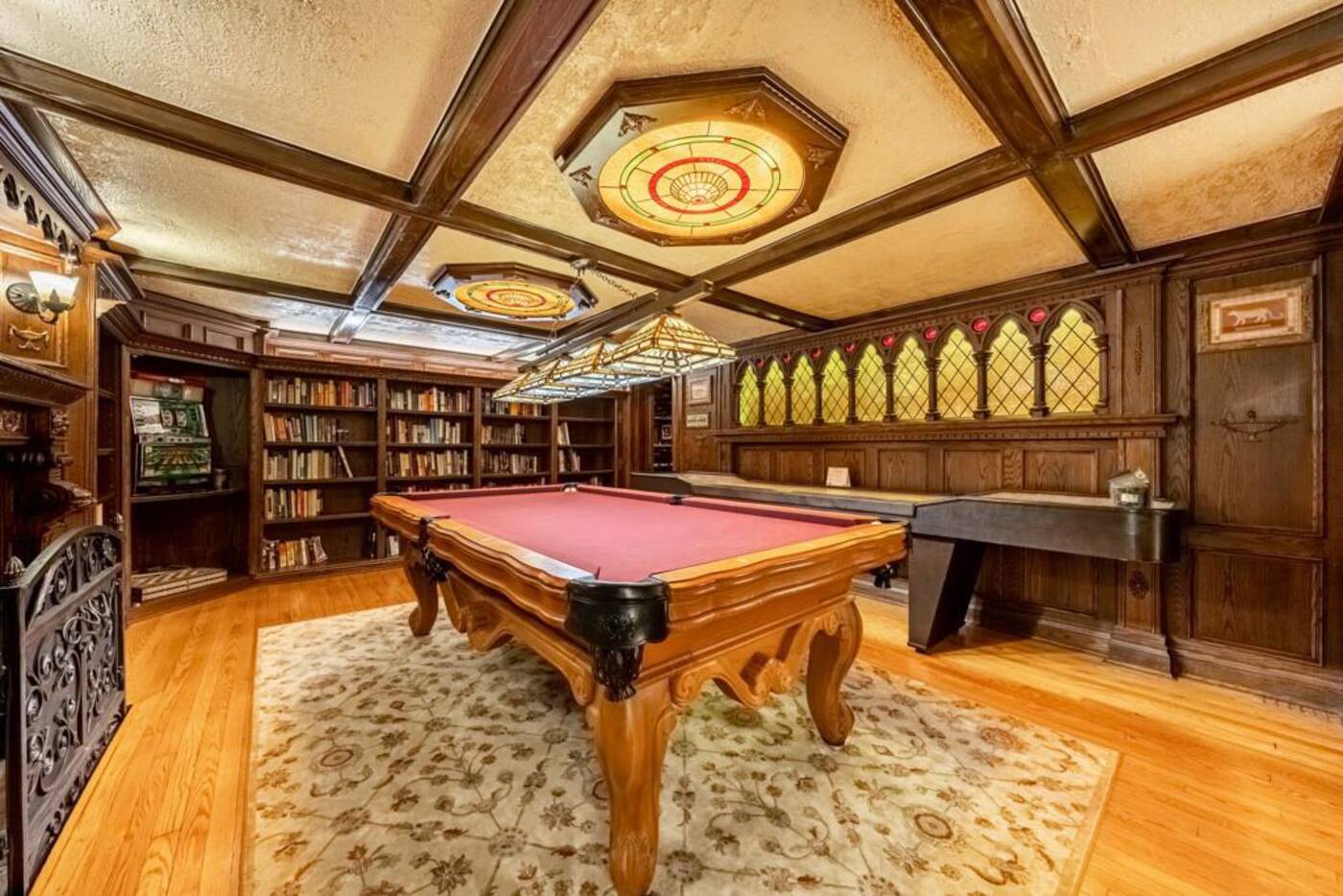 The library with stained glass lights.

In the basement there's a library with Gothic arches and heavy wood panelling. 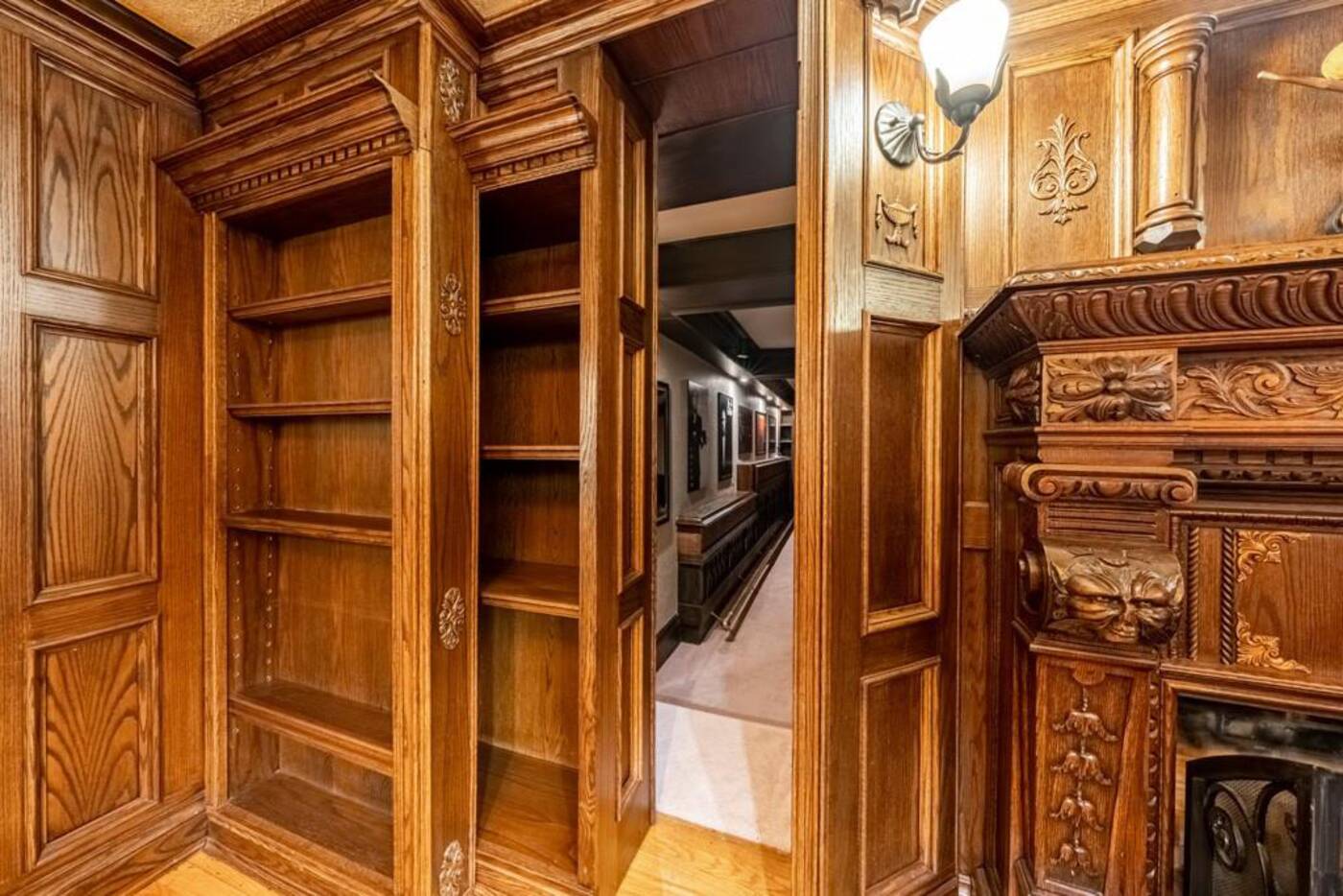 This is where you'll find a secret passageway if you're paying attention. 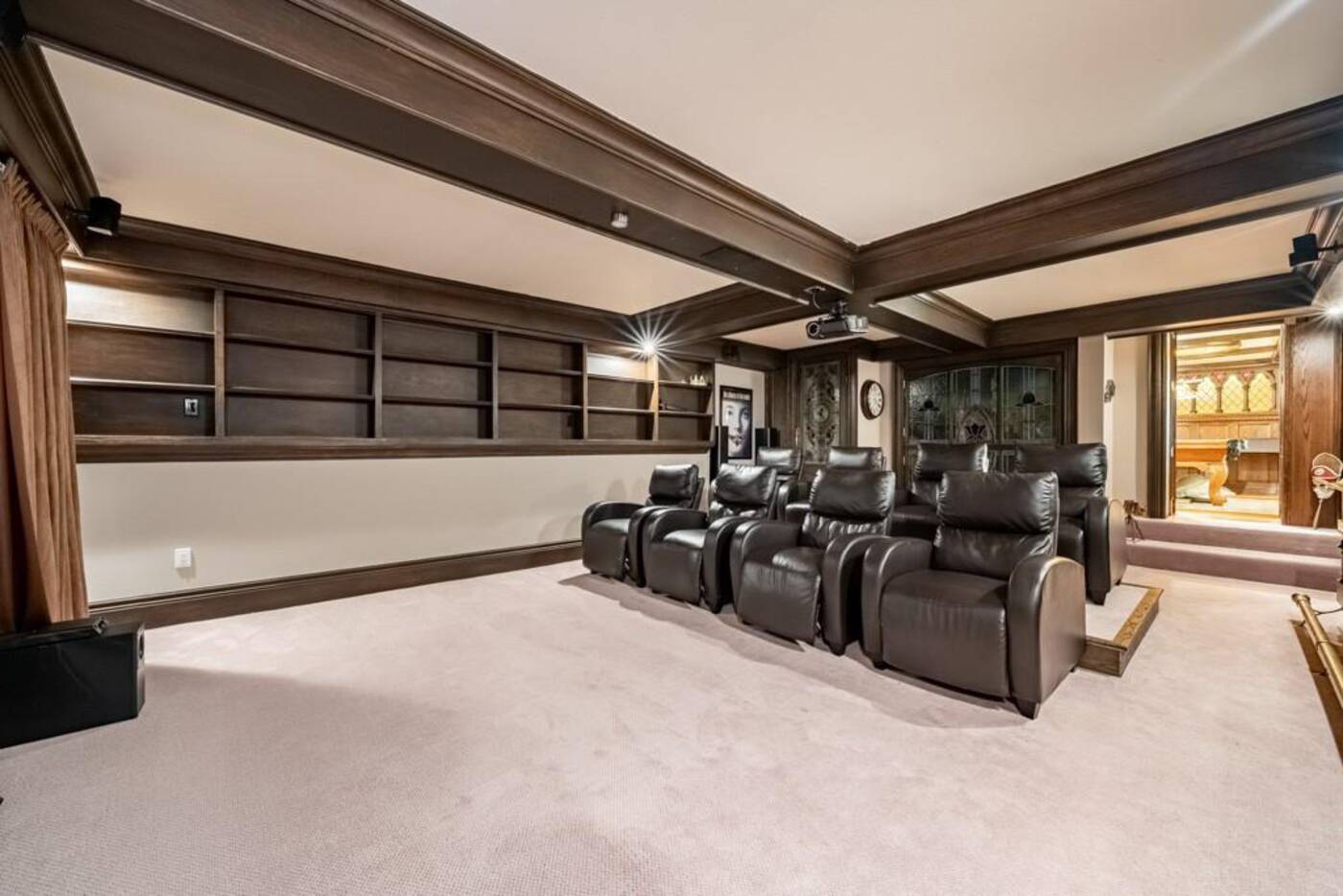 The secret passageway leads to the home theatre room, which is honestly just too cool. 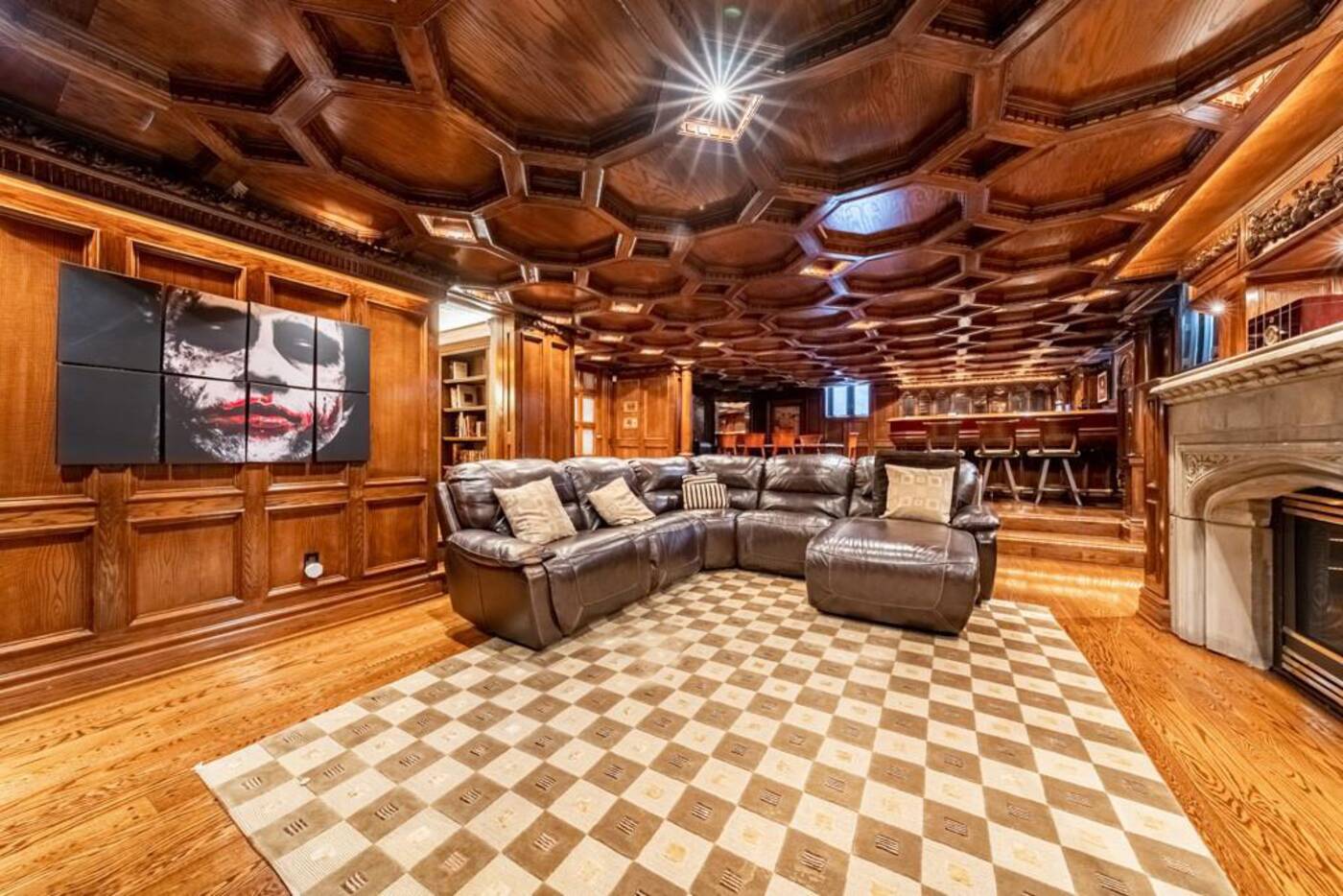 The lower level has an entertainment room with a cast stone fireplace, oak-panelled walls, coffered ceiling, dance floor and bar. 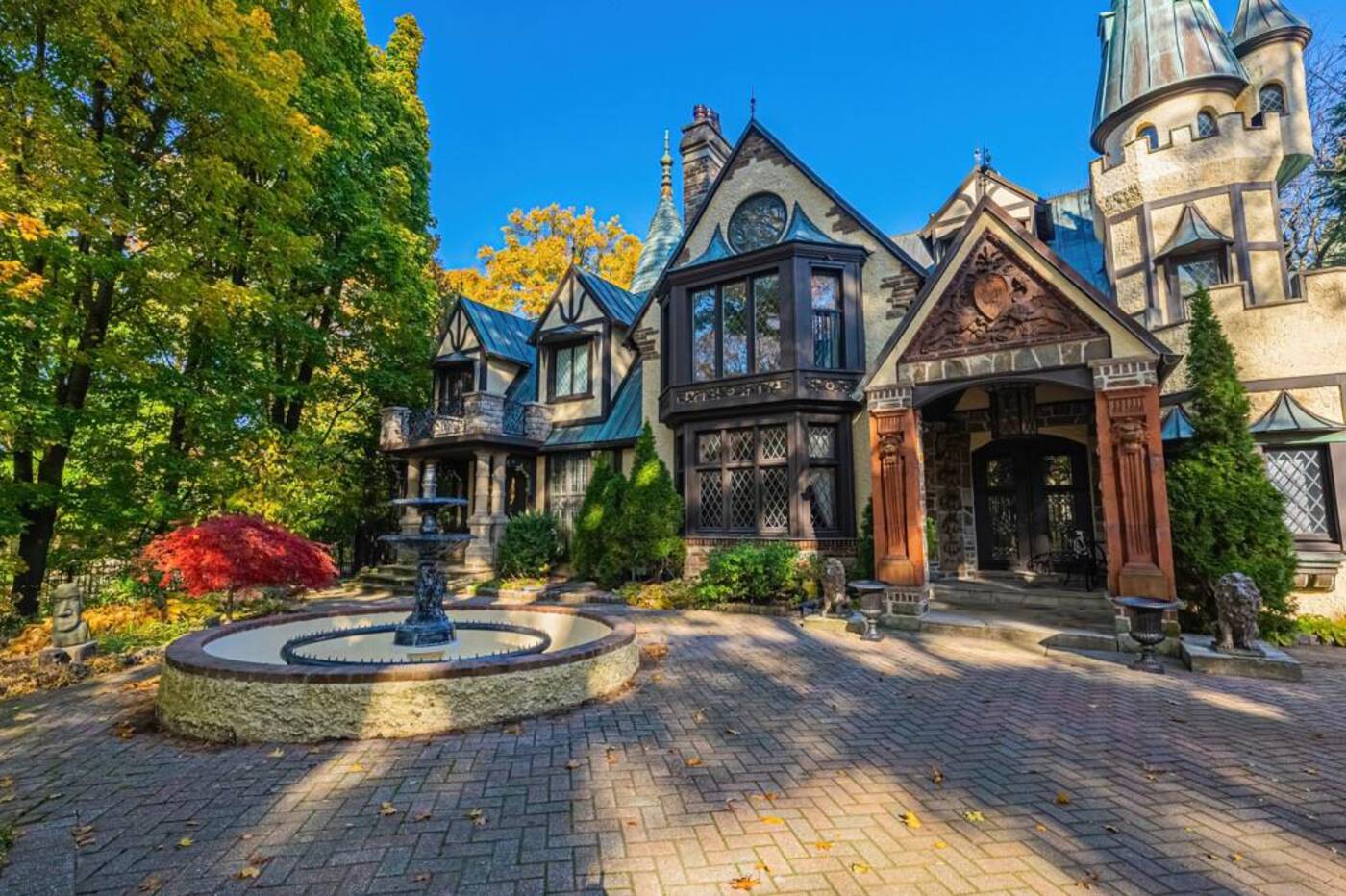 The fountain in the front of the house.

Outside, the front garden has a stone patio and fountain. 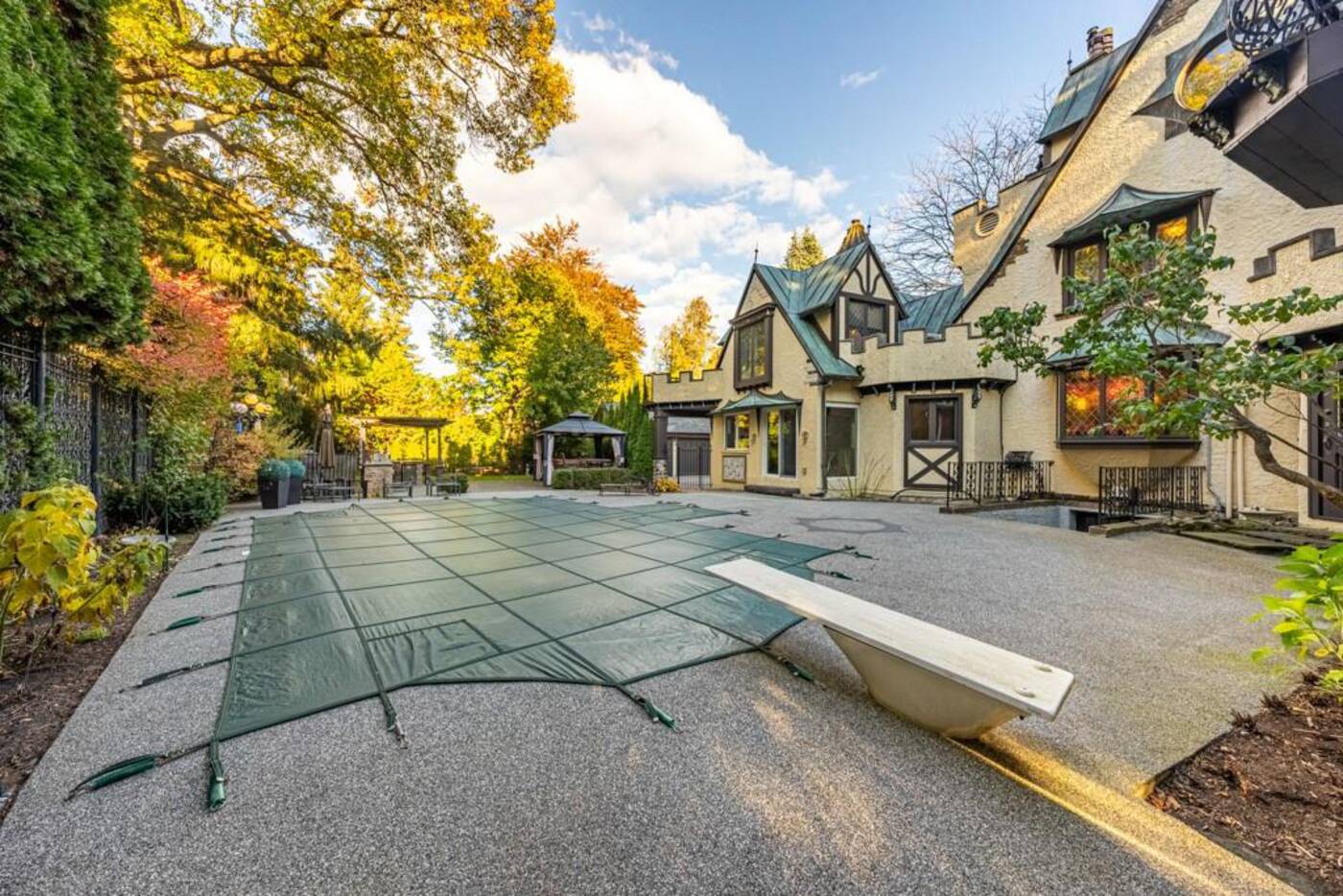 In the backyard you'll find an in-ground pool, outdoor kitchen and enough room for 15 cars. 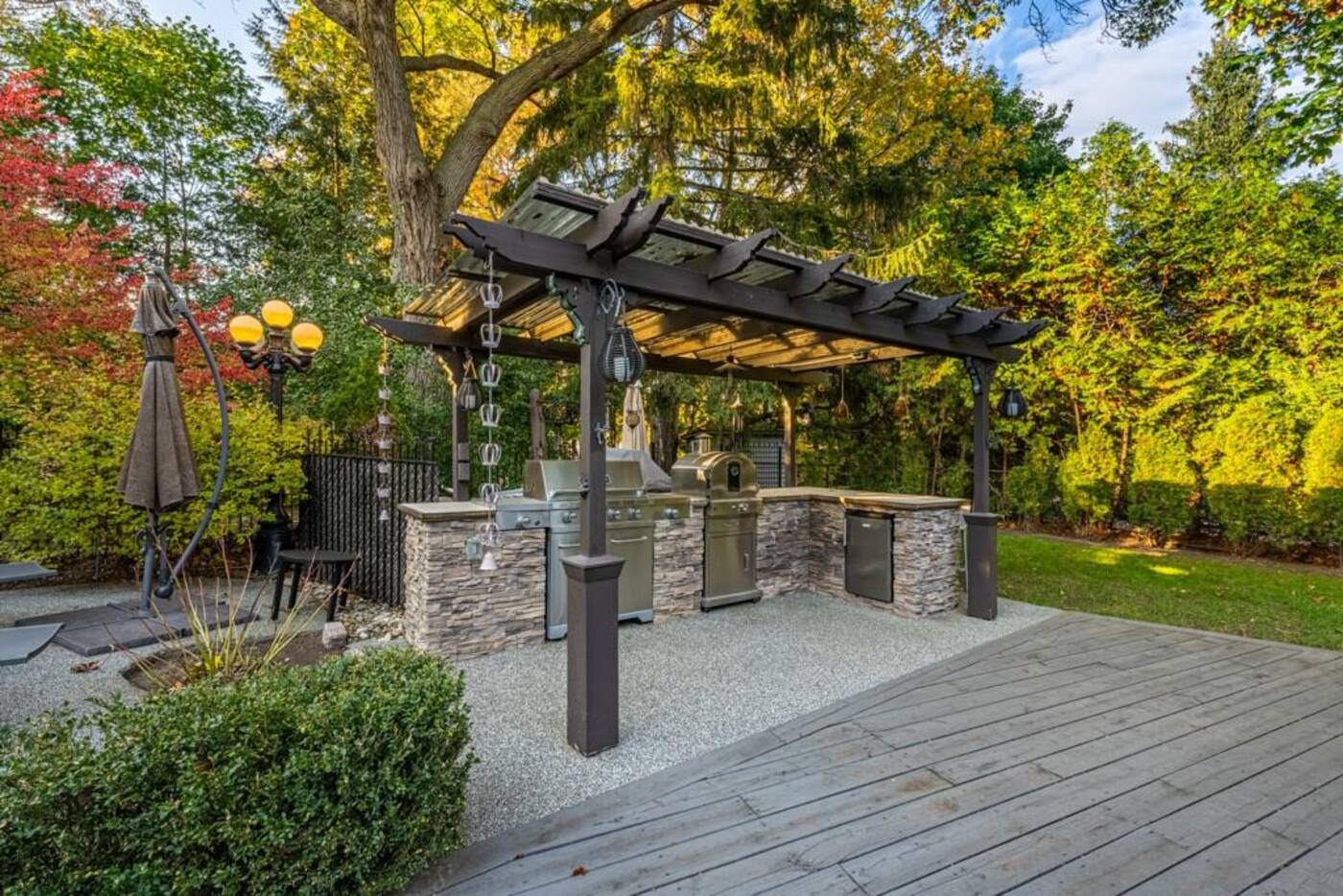 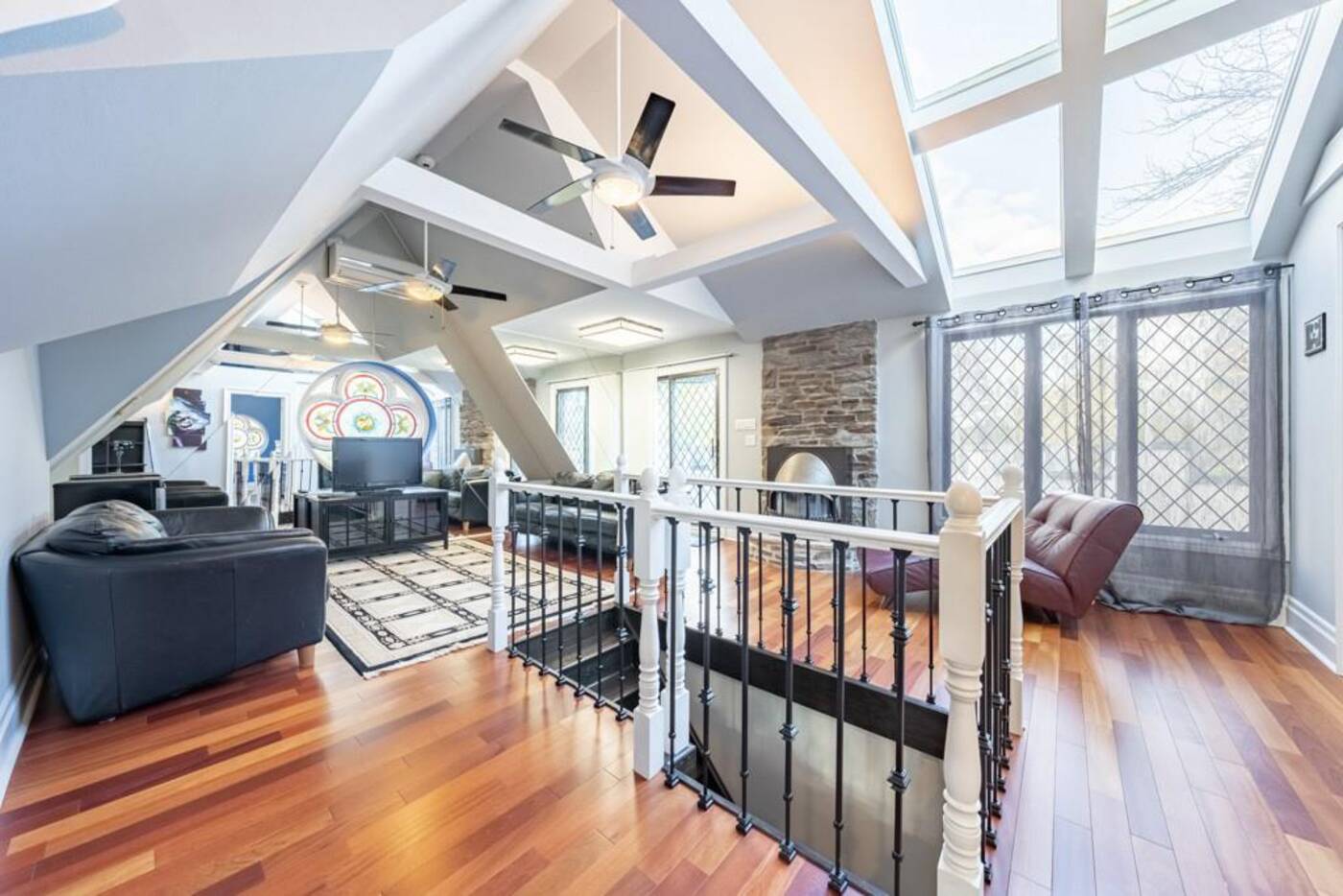 A sitting room with vaulted ceilings and a fireplace.

So wish hard upon that star!