Toronto's Indigenous community is getting a brand new healing lodge

Concerns that the traditional prison system was not meeting the needs of Indigenous women brought about Section 81 of the Corrections and Conditional Release Act of 1992, allowing for the creation of healing lodges custom-suited to the cultural and supportive requirements of this highly marginalized population.

Almost three decades have passed, and few of these healing lodges have actually come to fruition, though a modern, prototype model for a new type of healing lodge will soon be a reality.

Toronto's Indigenous community will soon be getting a brand new facility housed in a very unique-looking building, coming soon to Kingston Road between Birchmount and Midland.

Known as the Thunder Woman Healing Lodge, the new six-storey building is set to be just the third Indigenous-owned and led healing lodge in the country, and the first such facility in Ontario.

The building will be operated by the Thunder Woman Healing Lodge Society (TWHLS), serving Indigenous women who are exiting the federal or provincial corrections system or before the courts on bail but require additional support in order to successfully rehabilitate.

Residents of the facility will participate in a healing program and will each be provided with in-depth, personalized care to support their recovery and reintegration into society.

This will be done following what TWHLS describes as "the best practices of the Indigenous healing lodge tradition, a community-based residential healing space, and a transitional rental housing program under one roof."

A dozen bed-sitting rooms will support residents through the healing program component and another 12 supportive housing rental units that can support residents' transition back to everyday life.

The lodge will also fulfill the role of family reunification. A transitional housing program and relationships partner agencies will provide single parents leaving corrections systems — often without adequate family or community support at their disposal — with help in reuniting with their child/children.

The design of the new lodge, from architect Susan Speigel, features an interpretation of the TWHLS logo, a stylized Thunderbird representative of Anishinaabe culture.

This look will be achieved with a mix of composite panels in terracotta red and beige, giving the building a distinct identity with ties to its cultural uses. 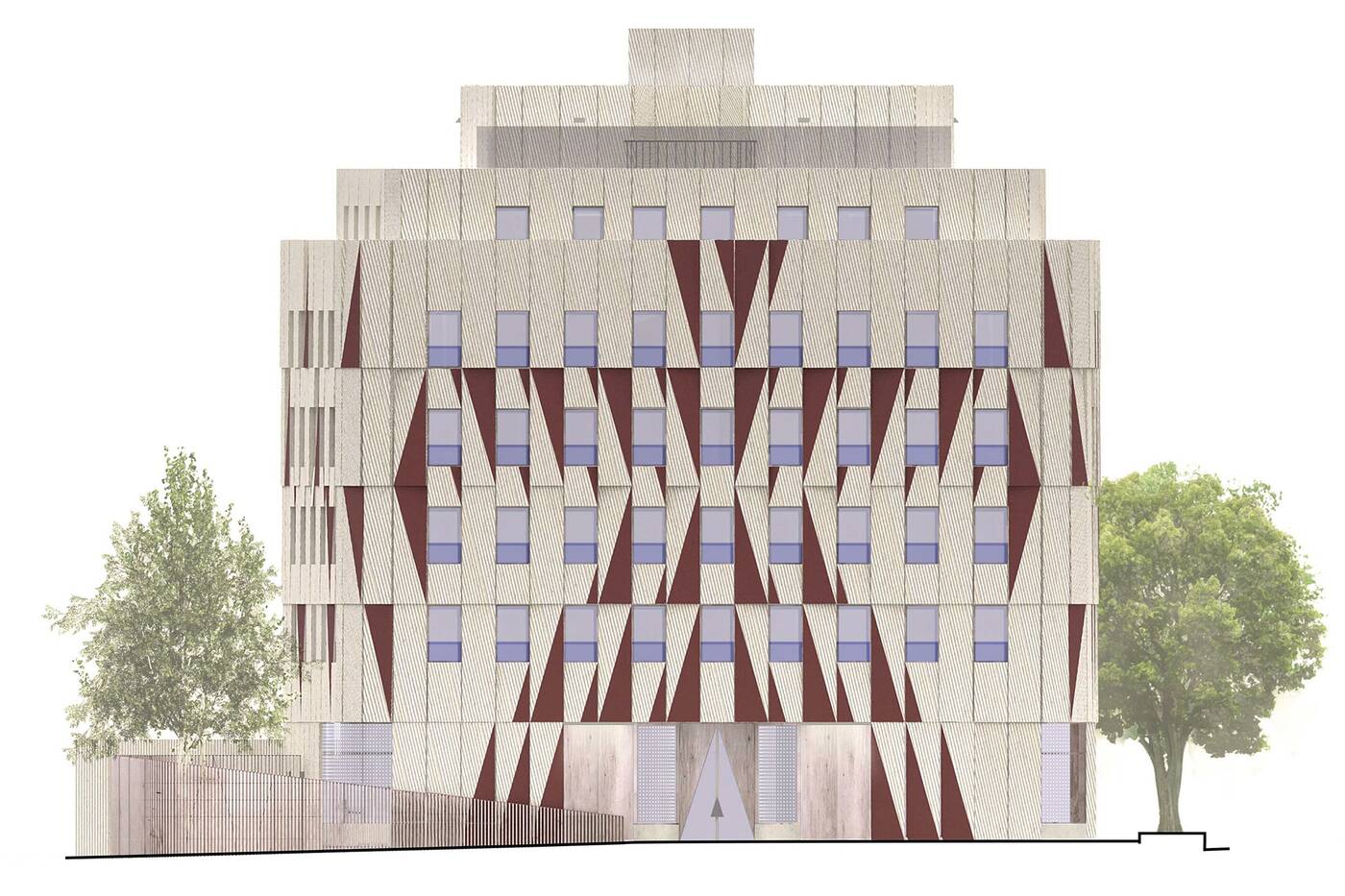 Rendering of the healing lodge.

According to the project's website, these motifs will not be limited to the exteriors, saying that the "lodge's architectural design team have striven to incorporate Indigenous cultural values throughout the physical space."

Though there have been a few opposing voices, the City stands behind the project, approving it in 2019 and granting it funding under Toronto's Open Door Affordable Housing Program.

This program was approved in 2016 with a goal of drastically increasing access to affordable housing, as well as supportive housing projects like the healing lodge, through fast-tracked funding, incentives, tax relief, and surplus land.

Construction is now right around the corner, with a land blessing ceremony held earlier in September marking the first on-site steps in making the new lodge a reality.

Shovels are about to go into the ground, but it wasn't entirely smooth sailing getting the new lodge to this stage.

The plans encountered hurdles along the way, namely community resistance to the project. Issues ranged from typical NIMBY complaints like impact on parking and traffic in the area to more serious concerns about the facility's nature in regards to its proximity to an elementary school.

Some locals have raised issues with those opposing the project. One community resident penned a letter in support of the project, calling out the "explicit and thinly veiled racism and classism" perceived to be the core of opposition.

There are clear reasons why this site was selected. Having a locale close to the lake plays a role in the restoration of identity and the lodge's healing programs. The project website explains that "Indigenous women are traditionally the keepers of the water."

Land in Toronto close to the waterfront doesn't come cheap, and Scarborough offered the best opportunity to build the lodge near Lake Ontario without breaking the bank.

Susan Speigel Architect via submission to City of Toroto