A sky-scraping tower, new height for an existing building, and some striking low-rise buildings — including a rebuilt subway entrance — could soon combine to redefine a corner of Toronto's College and University intersection.

Plans to expand and modernize the swooping Ontario Power Building at the intersection's southwest corner have been in the works since mid-2020. Proposed by developer KingSett Capital, the plan would see the existing 19-storey office tower at 700 University Avenue expanded in practically every direction. 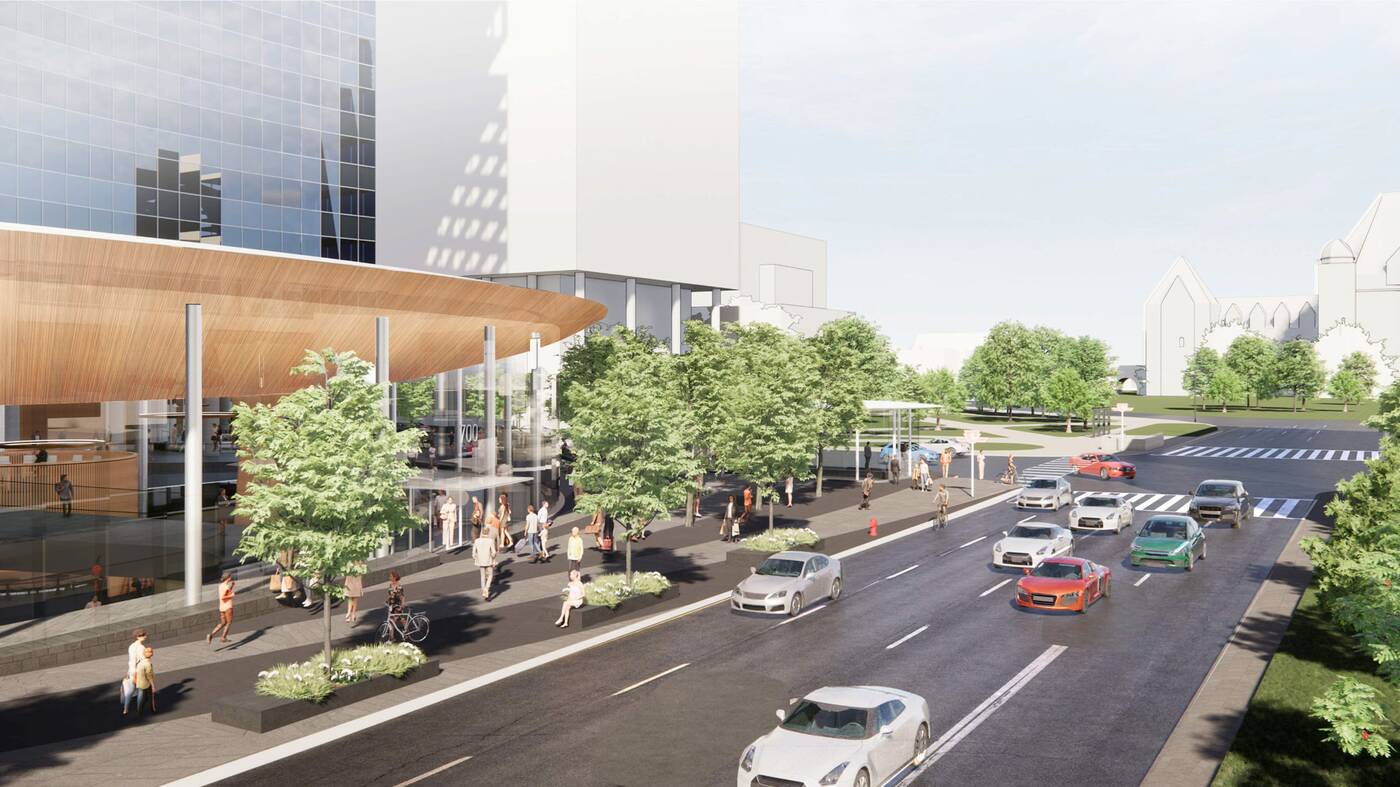 Looking northwest across University Avenue towards College Street. Rendering by KPMB Architects via submission to City of Toronto.

This includes a five-storey vertical addition up top, a new 56-storey rental tower at the southwest corner of the site, and the redevelopment of the building's sunken courtyard, including a rebuilt entrance and other improvements to Queen's Park subway station.

Yes, that means the popular Tim Hortons location in this sunken courtyard would be a casualty of the redevelopment. 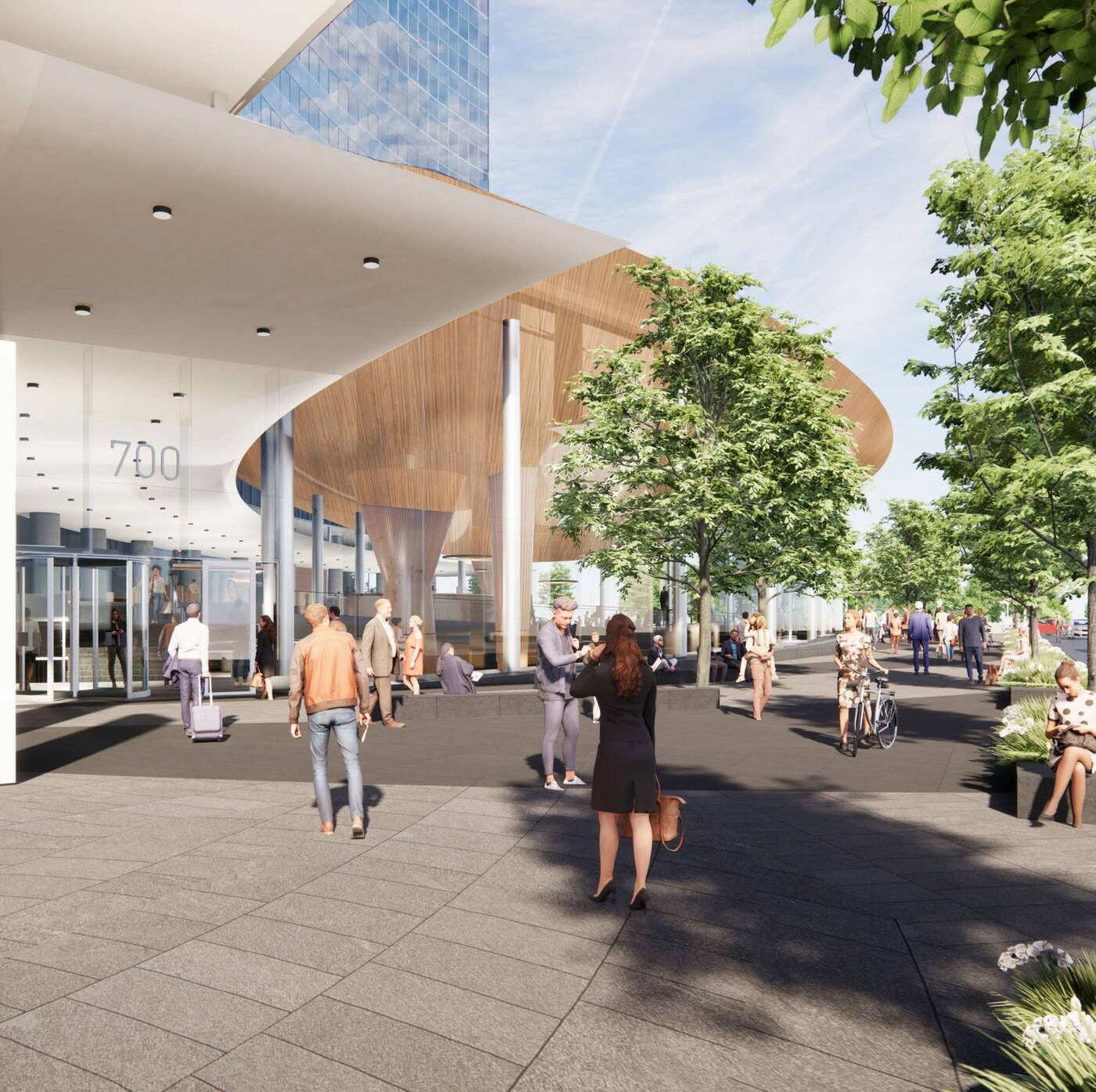 New glass pavilion and office entrance. Rendering by KPMB Architects via submission to City of Toronto.

Designed by KPMB Architects working with Adamson Associates Architects, the additions and new tower would drastically alter the look of the existing building, known for its concave mirror facade.

A new lobby and retail concourse would occupy a sparkling glass pavilion with wood interiors capped by a green roof. The same glass pavilion design is planned for a redesigned entrance to Queen's Park subway station below.

The residential component would stretch almost 196 metres above Orde Street on a small triangular footprint at the site's southwest corner. 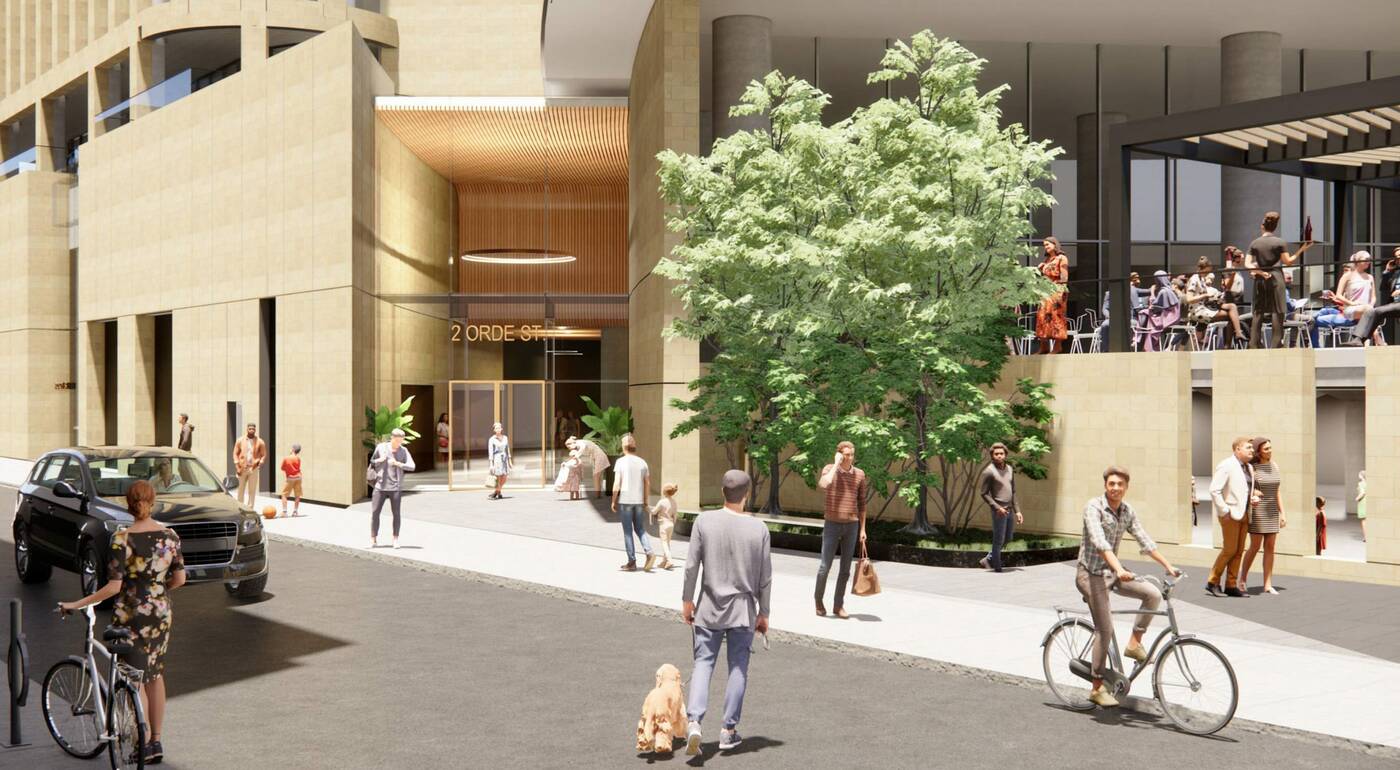 This could bring a massive boost in residential space to the north end of Hospital Row, proposing 475 purpose-built rental units in a mix of 90 studios, 195 one-bedrooms, 138 two-bedrooms, and 52 three-bedroom units.

Some neighbours, especially those in shorter buildings to the west, are likely not pleased by the towering proposal that now threatens to cast them in shadows, though there are a handful of policies supporting this type of development.

The Provincial Policy Statement, the Growth Plan for the Greater Golden Horseshoe, and the City of Toronto Official Plan all promote intensification in areas well-served by transit.

These policies and the site’s position at the intersection of a subway and streetcar line put the project on good footing to gain approval.