There's always more room to build luxury condos in Toronto, even when the site you own is already stuffed to the lot lines with existing high-rises.

Such is the case at the corner of Bay and Yorkville in the posh Yorkville neighbourhood, where a new development application is proposing a condo tower on the site of an existing nine-storey office building at 1255 Bay Street. 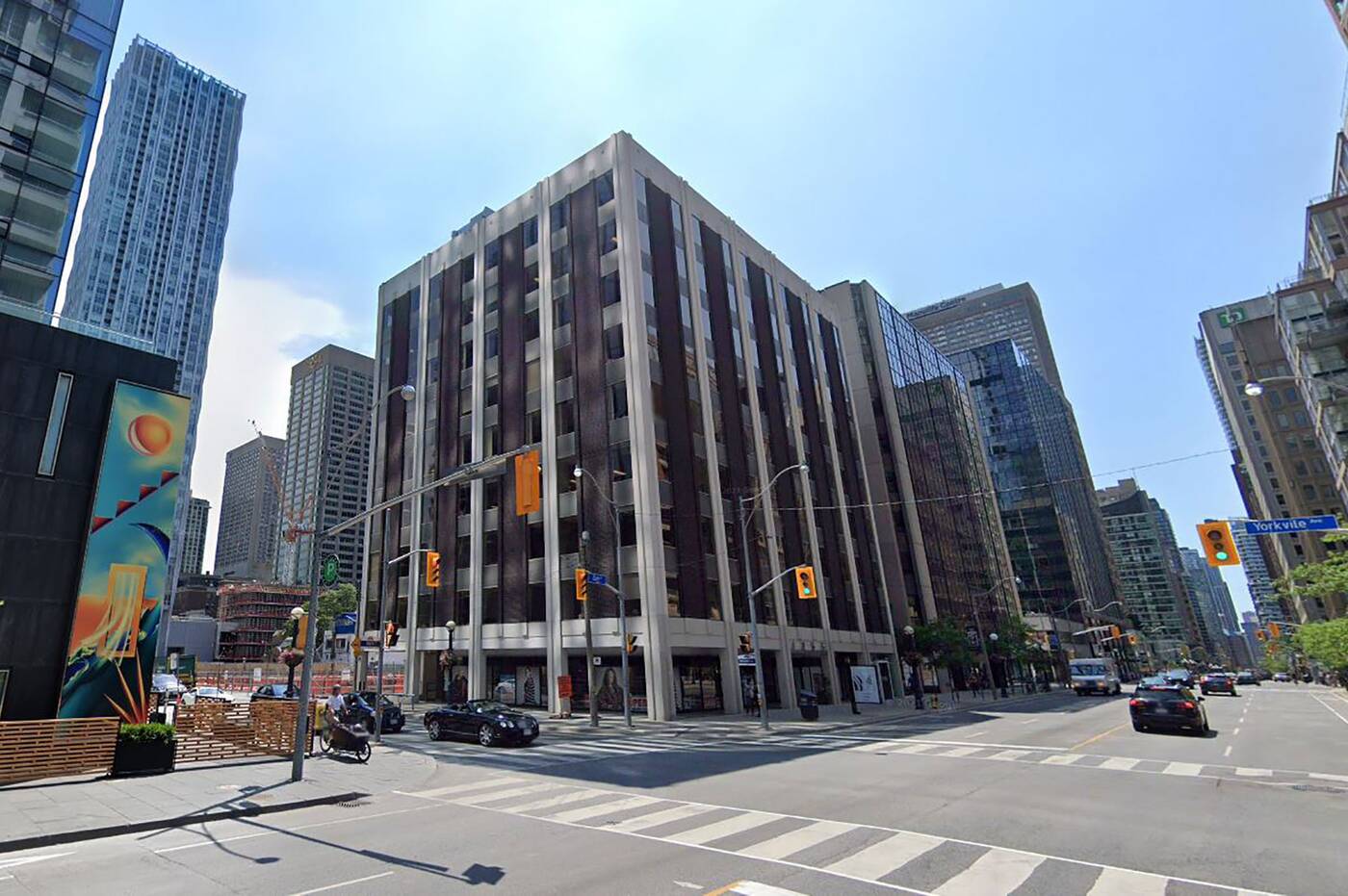 Proposed for developer KingSett Capital, the 35-storey tower would rise to a height of 129.5 metres, directly south of the Four Seasons Hotel and Private Residences.

Designed by BDP Quadrangle, the tower sprouts from a ten-storey base that matches the height of the office building to the south, which is included in the redevelopment plans but will remain unchanged.

Setting this one apart from the scores of other condos in the works across Toronto, the project's base will be divided from the tower above by a set of sculptural structural supports. 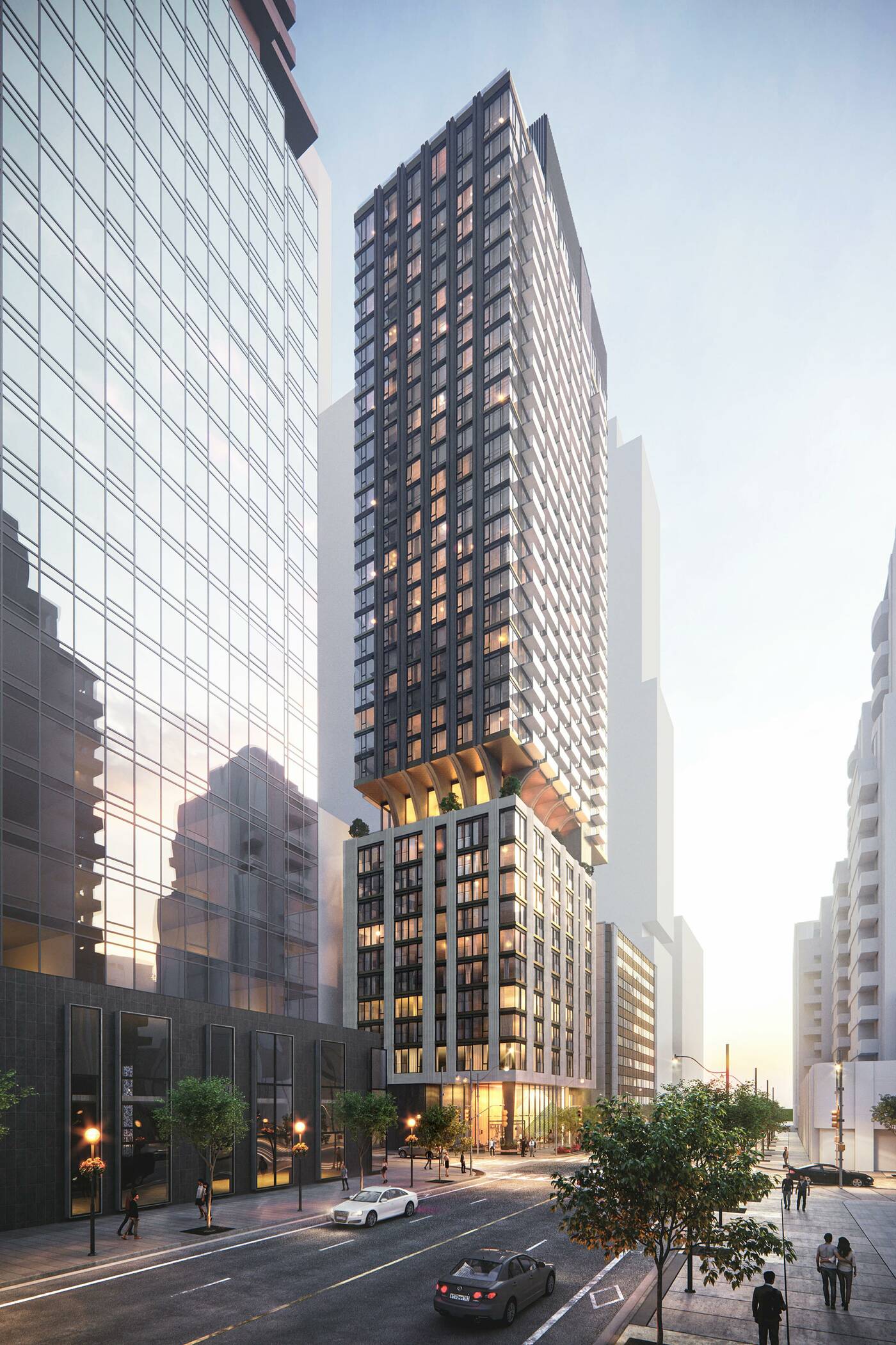 Looking southeast towards the proposed condo tower at 1255 Bay. Rendering by BDP Quadrangle.

Described in planning documents as a "visual break," this eleventh floor will host indoor and outdoor amenities for residents of what will surely be some very pricey condominium units. 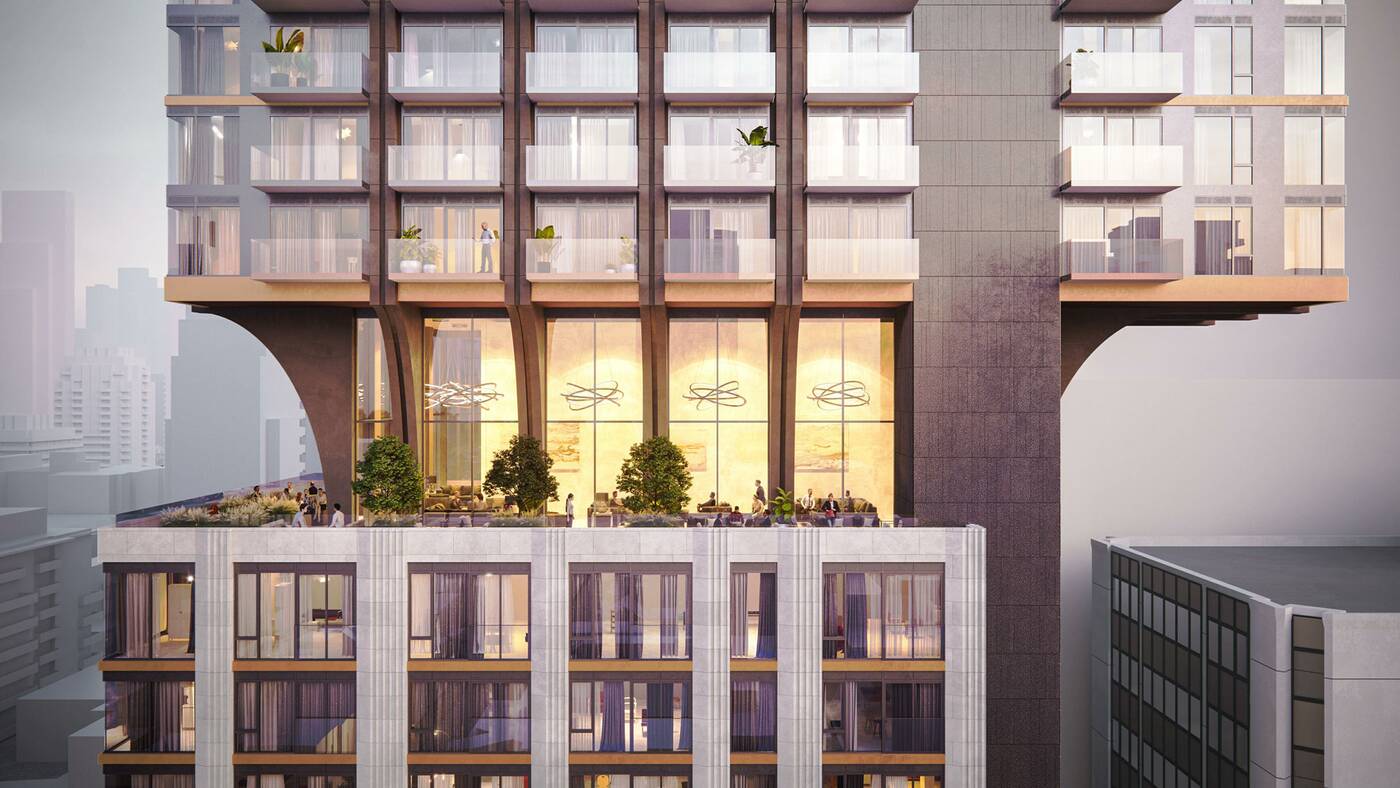 Looking east towards the 11th floor of the proposed condo tower at 1255 Bay. Rendering by BDP Quadrangle.

Above the eleventh floor, a dramatic cantilever on the tower's south side would make the building appear as if it floats above the office tower that will remain to the south.

We could see 357 new condo units added to the swelling Yorkville area if the plan is approved as currently proposed.

Even though the vast majority of us will either be unable or unwilling to shell out the big bucks that Yorkville condo units rake in, the project has the potential to shine at the pedestrian level where we can all enjoy it. 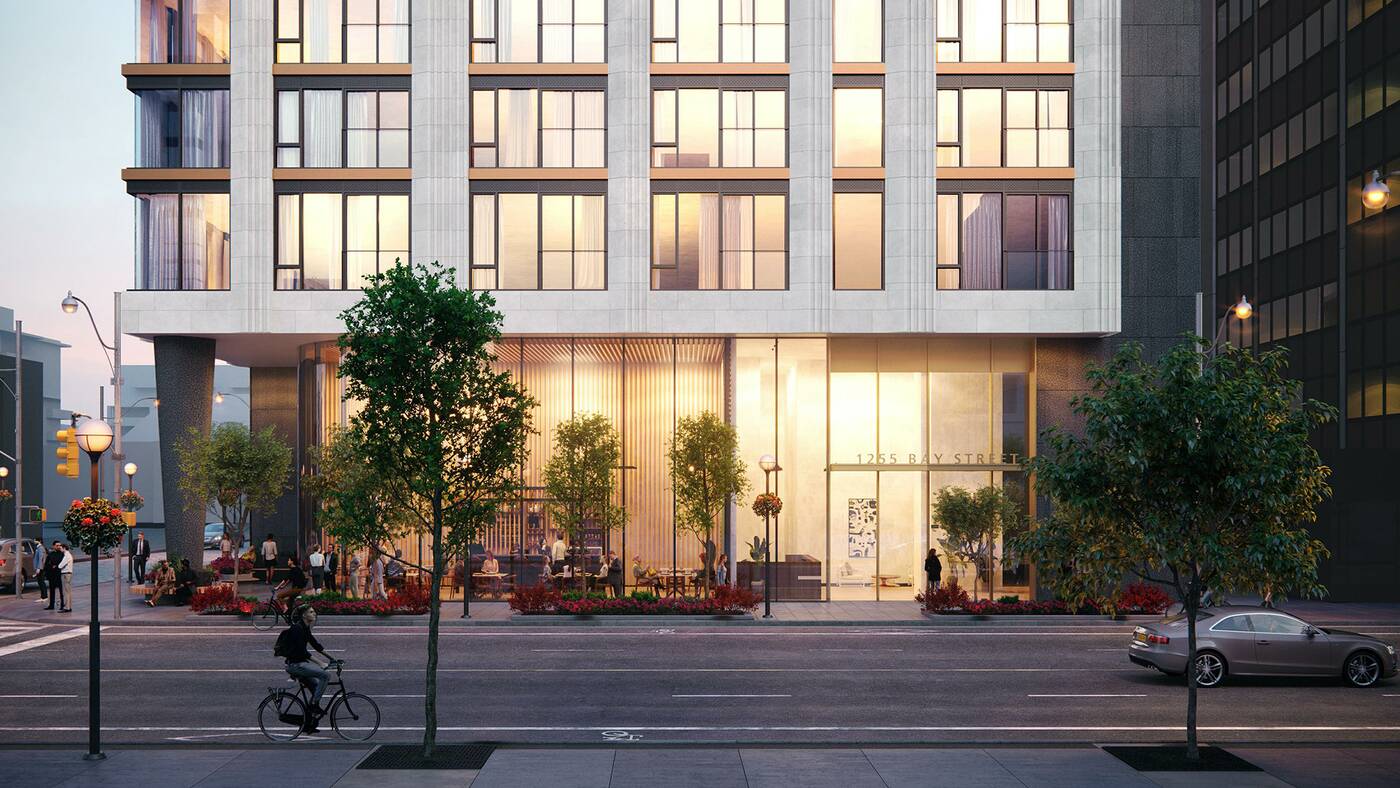 Looking east across Bay towards the base of the proposed condo tower at 1255 Bay. Rendering by BDP Quadrangle.

A cutaway area at the base of the building, supported by a massive sculptural column, would offer a sheltered area with seating to the corner of Bay and Yorkville. 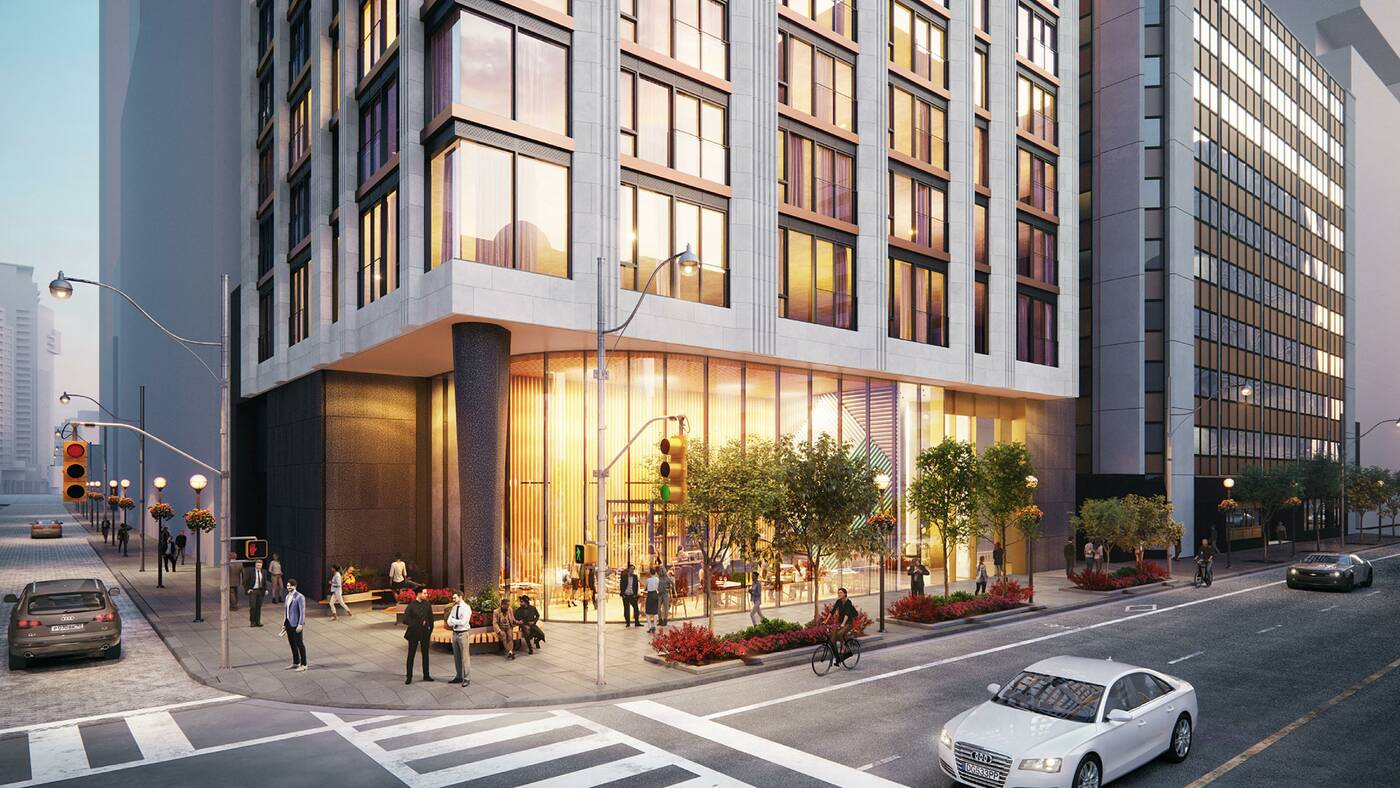 Looking southeast towards the base of the proposed condo tower at 1255 Bay. Rendering by BDP Quadrangle.

The south side of Yorkville Avenue between Yonge and Bay has been a chaotic construction zone for several years now.

While this project would keep the dusty mess going for another few years, this stretch of Yorkville Avenue has a lot of promise in the not-too-distant future.