An underutilized (and frankly kind of sketchy) block of land near Bathurst and Queen has been targeted for a makeover of epic proportions involving not one but two new buildings, plus all the accoutrements, in Toronto's Fashion District.

Two separate development applications have been been submitted to the City of Toronto for what will eventually be a mixed-use office, residential and retail complex along the east side of Bathurst Street between Richmond and Adelaide Streets West.

Designed by BDP Quadrangle on behalf of Allied Properties REIT, the complex will incorporate several buildings that are already onsite, and completely transform the immediate public realm with everything from a new courtyard to widened sidewalks along Bathurst. 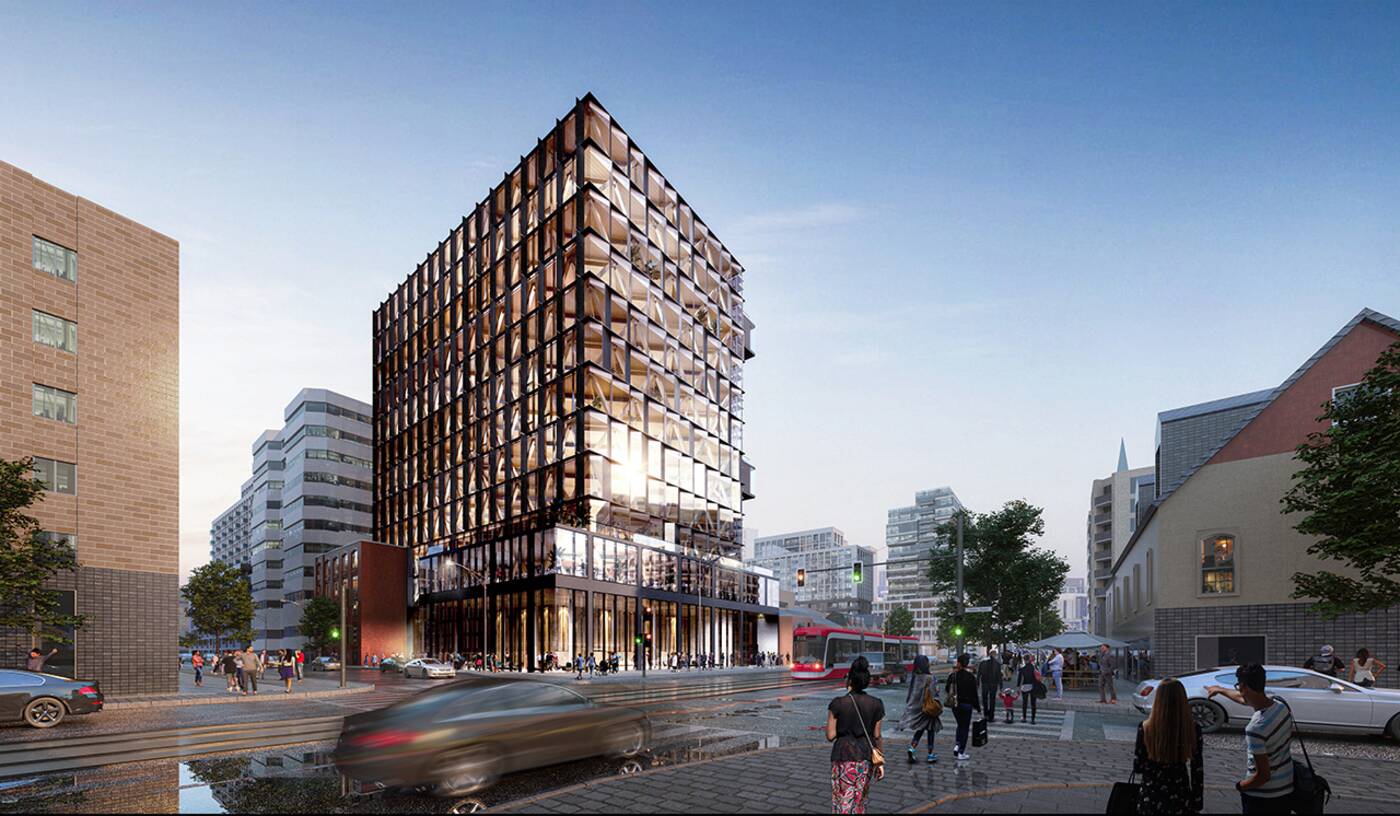 The new office building will add a splash of sophistication and light to an otherwise underused corner of a major city block. Image via BDP Quadrangle/City of Toronto.

If approved as proposed, the complex will be constructed in two phases, starting with the redevelopment of 141 to 161 Bathurst Street and 579 to 591 Richmond Street West to include a a 12-storey office and retail building.

The abandoned structures stick out like a sore thumb against all of the new condo buildings rising just south on Bathurst, especially now that they've been fenced off and completely boarded up. 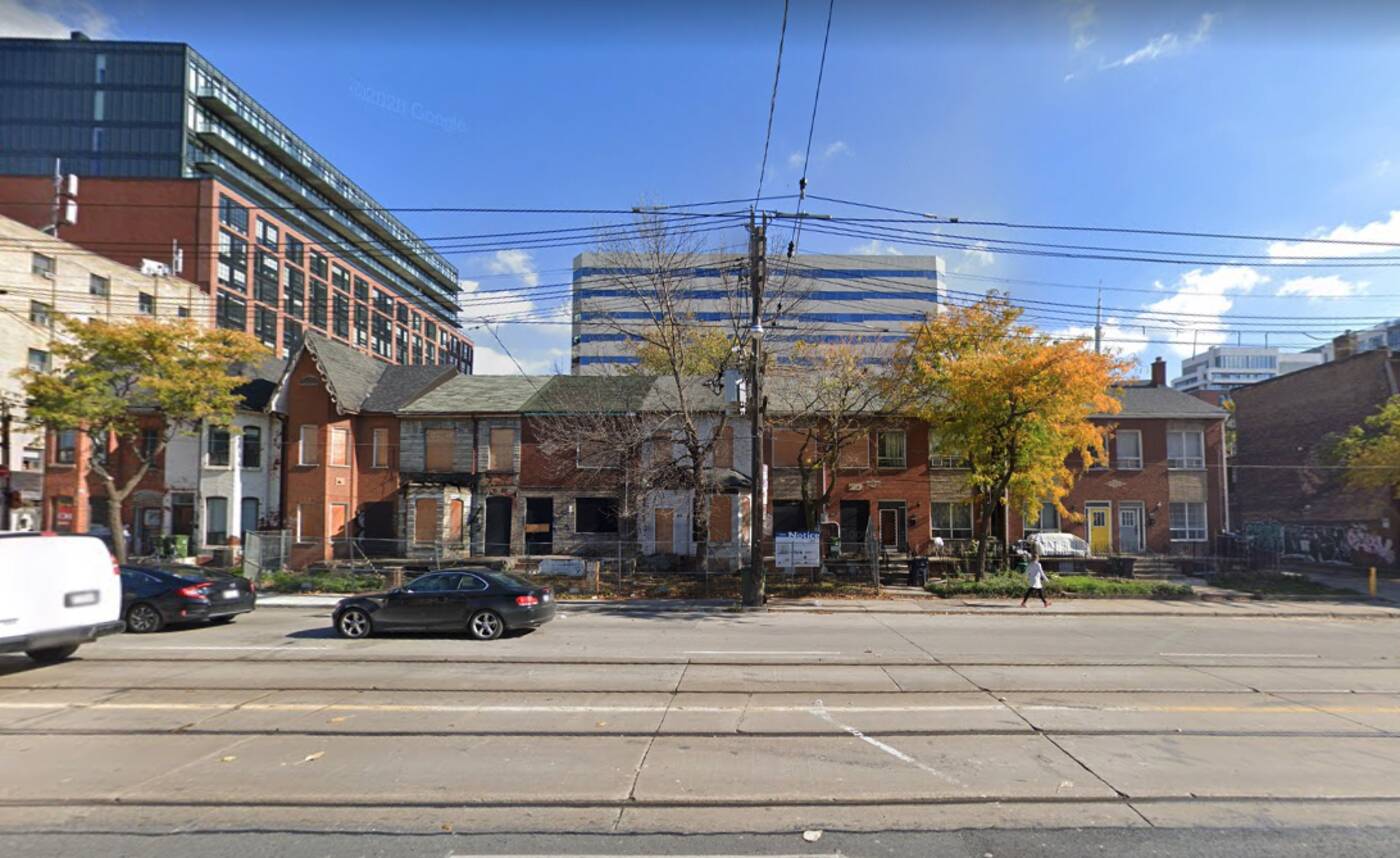 The rowhouses on the property in question, as of October 2020. Image via Google Maps.

City council has approved the demolition of these dilapidated properties, but they have yet to be razed, making for a bit of an eyesore (and safety hazard for adventurous kids/drunk adults in the area).

Two additional townhouses with heritage designation at 159 and 161 Bathurst St., just north of the rundown Victorians, are proposed to be demolished as part of the project.

Developers do, however, propose at least partially retaining two adjacent heritage buildings: The offices at 141 Bathurst St. and 579 Richmond St W. Both of these buildings are, perhaps coincidentally but probably not, managed by Allied REIT. 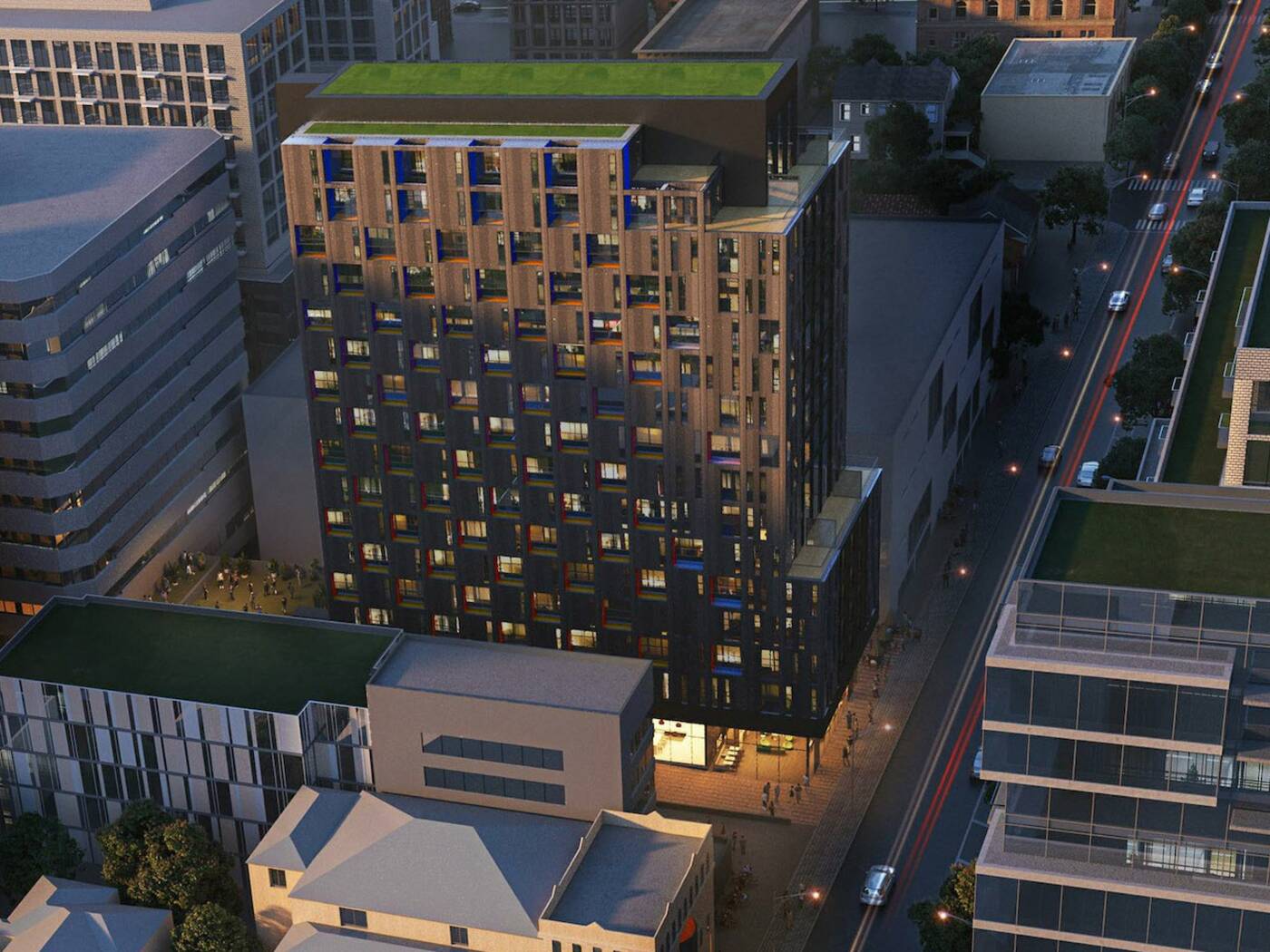 The residential portion of the complex will contain 139 purpose-built rental units in total. Rendering via BDP Quadrangle/City of Toronto.

The "modern and architecturally distinct" 12-storey non-residential building proposed by by Allied will have retail stores on the main floor and measure roughly 59.3 metres tall.

This mixed-use building would sit at the southeast corner of Bathurst Street and Richmond Street and, aside from the roughly 1,332 square metres of ground floor retail space, would be comprised entirely of office space.

Phase 2 brings the sites at 555 Richmond and 550 Adelaide into the picture. If all goes well for developers, the space will eventually be transformed to hold a complementary 16-storey purpose-built rental residential building, also with retail on the ground floor level facing Adelaide Street West. 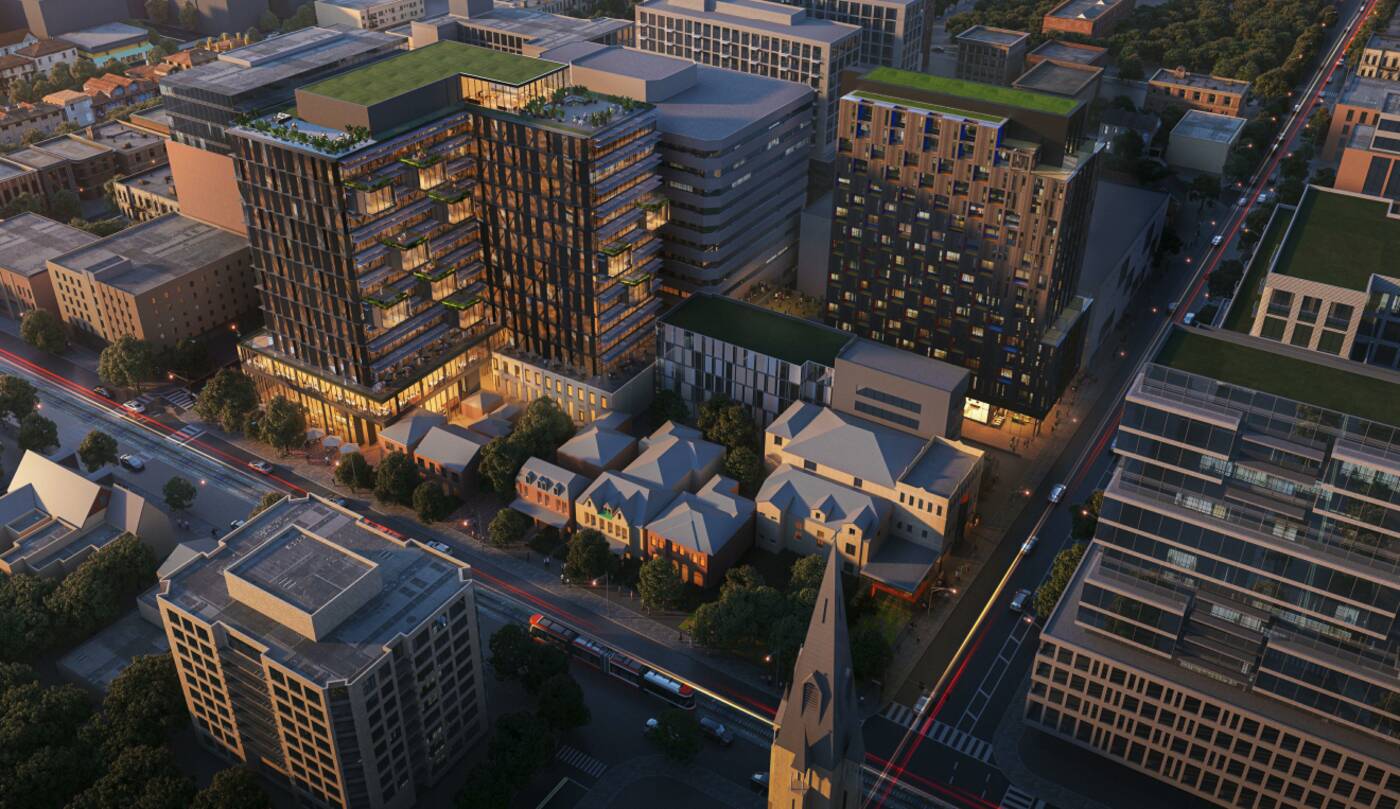 The eastern side of Bathurst between Adelaide and Richmond Streets will look completely different if developers are able to build out the complex as planned. Rendering via BDP Quadrangle/City of Toronto.

With a proposed future address of simply 550 Adelaide Street West, the new residential building would replace the surface parking lot currently used for 555 Richmond Street West. The latter buidling (another Allied property!) will be retained.

A total of 139 rental units are proposed within the 16-storey BDP Quadrangle-designed tower: 80 one-bedrooms, 40 two-bedrooms and 19 three-bedrooms.

Developers say that the plan as a whole "will contribute to the comprehensive reinvigoration of the public realm in the block, with multiple new pedestrian routes proposed, connecting the sites' three frontages to a series of new publicly accessible outdoor and indoor spaces."

The subject site takes up roughly half a city block between Bathurst and Portland Streets in downtown Toronto. Image via Bousfields Inc.

"Portions of some of the existing buildings will be retained throughout the development for their cultural heritage value, while also providing rental replacement units off site," reads a planning rationale document submitted by Bousfields Inc. on behalf of Allied to the city last month.

"The two proposed tall mid-rise buildings have been planned together to promote connectivity and improve the public realm within the block, with a new north-south connection that will connect Adelaide Street West to Richmond Street West, with publicly-accessible internal connections providing access to Bathurst Street as well."

Perhaps most interesting for locals (besides the widening of sidewalks along Bathurst Street) is the creation of new internal courtyards and multiple POPS (privately owned publicly-accessible spaces). We can certainly always use more public green space in downtown Toronto.