Here are the Toronto neighbourhoods with the most Airbnbs right now

Between the health crisis and new restrictions introduced in Toronto last fall, the city's short-term rental market has been absolutely rocked in recent months, to the delight of those who know how detrimental so many "ghost hotels" are to the housing supply and long-term renters.

Despite the provincewide ban on such listings in the height of the pandemic, thousands of Airbnbs were still hosting guests in Toronto throughout 2020 — which, coupled with the fact that the city already had nearly 10,000 illegal short-term rentals, didn't lend residents much faith in the integrity of the industry and its stakeholders.

Regulatory noose tightens on @Airbnb. Toronto is one of @Airbnb's top 10 cities by revenue worldwide and local housing groups estimate 74% of revenue will disappear and more importantly 7,300 homes returned to housing market after regulations are enforced. https://t.co/Uz7rOgSWYc

Due in part to a decline in travel and tourism, there has more recently been a glut of Airbnbs coming onto the market as normal apartments, driving rent prices down and vacancy rates up, especially in condo buildings once notorious for weekend partiers from out-of-town.

The short-term rentals that still remain now have to be registered with the City, among adhering to other new rules, which means that this year we know a bit more about these units — including which neighbourhoods have the highest numbers of them.

According to the City's latest data on registered short-term rentals, there are nearly 2,000 listings.

But, this number only accounts for those owners who registered their units by Jan. 1 as they were supposed to. Just one month before this deadline, a paltry 10 per cent of owners had done so, meaning that there are potentially many more Airbnbs operating in the city at the moment. 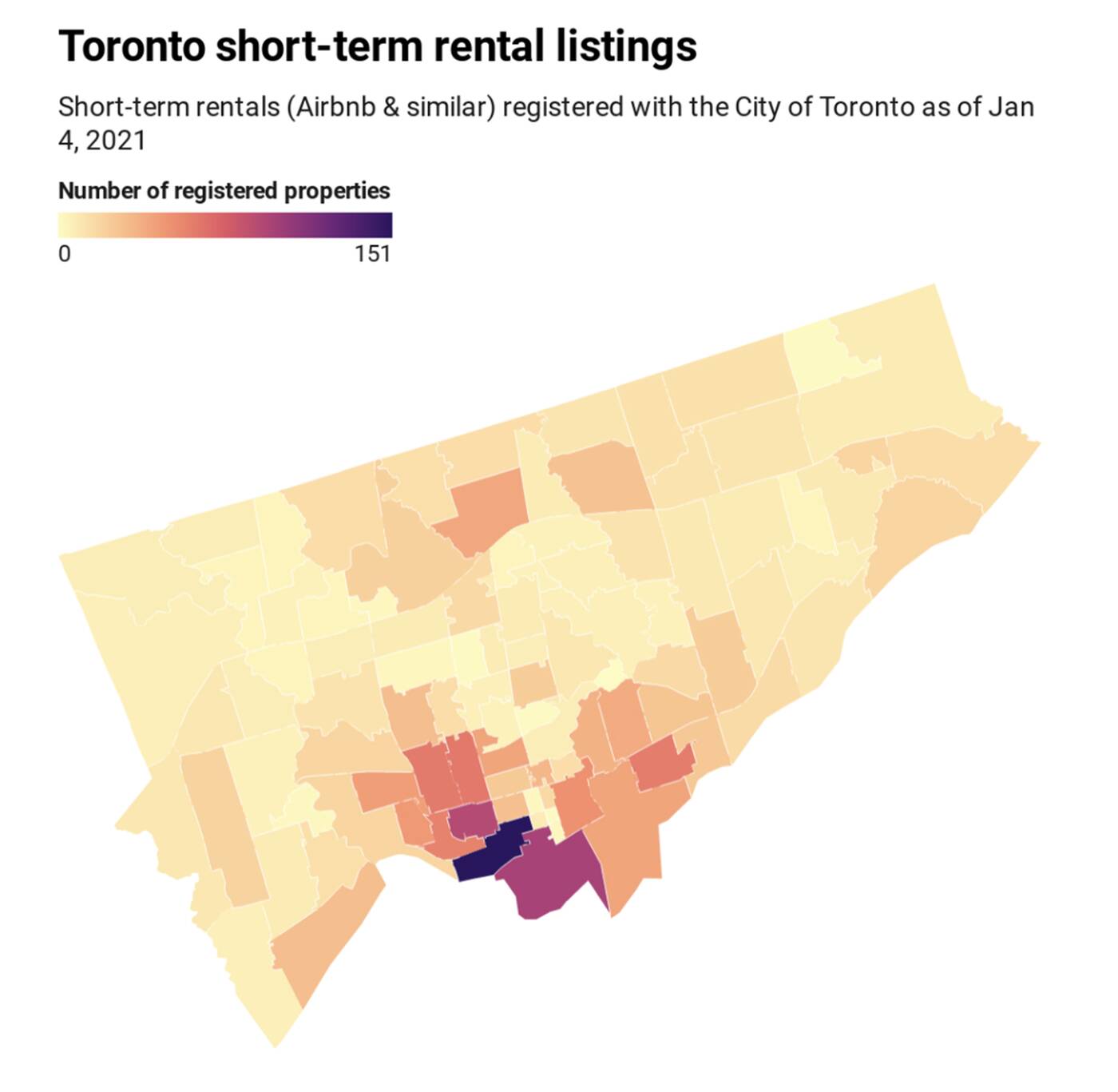 Still, the registration information gives some idea of where short-term rentals are the most popular. As could be expected, they are more densely packed in the downtown core, particularly in condo-heavy areas like along the Harbourfront, CityPlace and in the Entertainment District.

Basically all of the city centre from Roncesvalles to just east of the DVP and from the waterfront up to St. Clair are rife with short-term rentals, with well over 150 registered listings each in the wards of Spadina-Fort York and University-Rosedale, as well as more than 100 in Beaches-East York, Toronto Centre, Davenport, Scarborough Centre, and nearly 100 in Don Valley West.

These are, once again, only those listings that have been registered with the city, with officials vowing to take enforcement action against any operators who aren't following the rules, which also include a regulation for a short-term rental to be the owner's primary residence, not just an investment property.

"Registration is a mandatory step to legally rent out homes for short-term stays," the City reiterated in a statement last month calling for all operators to register.

Can’t wait to rat out the ghost hotel on my floor!

As more and more hosts continue to adhere to orders by registering and those flouting the new guidelines are hopefully busted, we may have to wait a bit longer to get a fuller data set that truly shows the new landscape of the short-term rental market in the city following the impacts of 2020 — and how increased travel in 2021 and a return to normal will change things.