Here's what Toronto's new 57-storey skyscraper will look like

The corner of Bay and Harbour may be getting a new 57-storey office tower perched atop the heritage Toronto Harbour Commission Building.

Updated plans for The Hub — a skyscraper from multinational corporation Oxford Properties — have been submitted, and if approved, will see a building designed by London-based firm Rogers Stirk Harbour + Partners to 30 Bay Street. 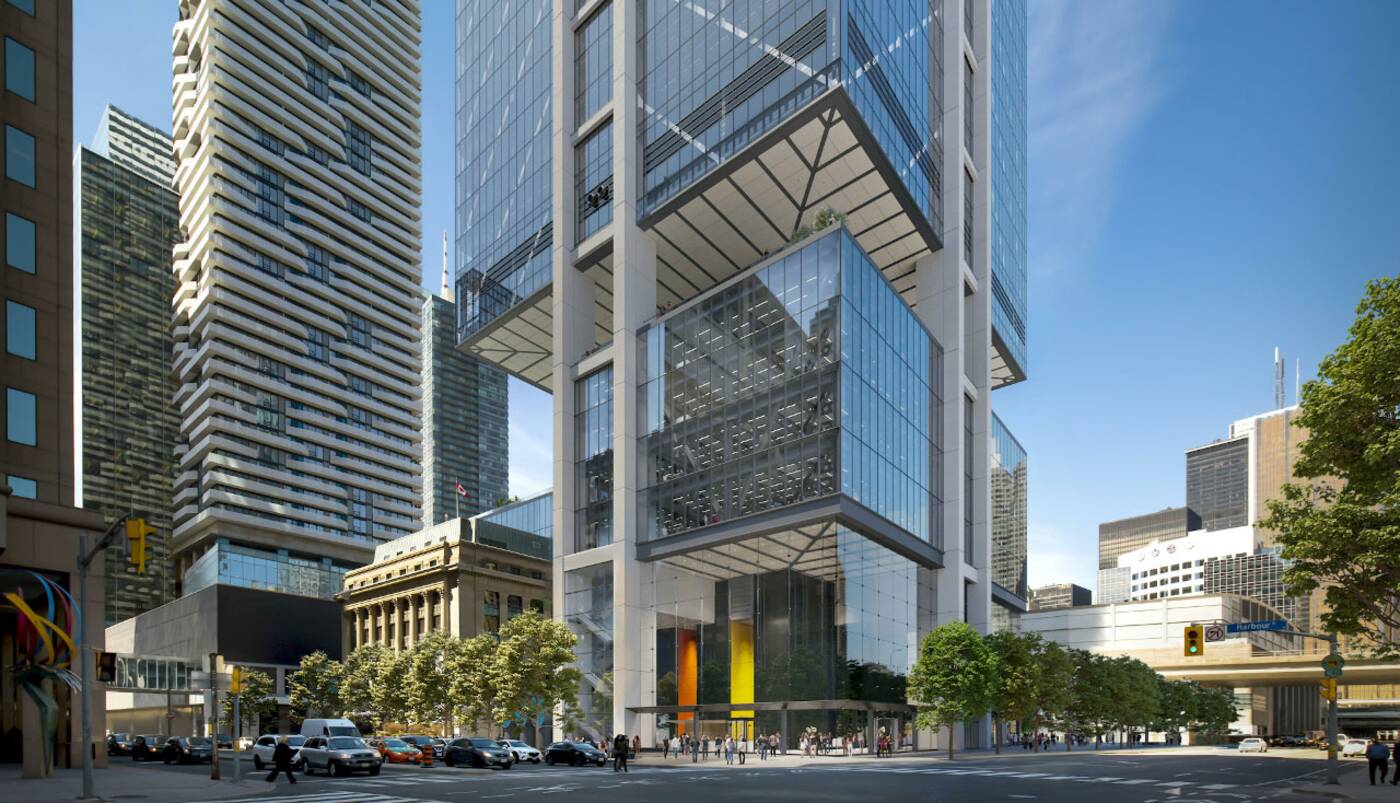 The Hub will be built next to the Harbour Commission Building near Toronto's waterfront. Photo by Oxford Properties via City of Toronto development application.

The project near Toronto's waterfront which was initially proposed in 2018 will add around 1.4 million square feet of office space to the neighbourhood. The building's west side will also be directly connected to The PATH network.

The Hub will also sit overtop (but only lightly touching) its next door neighbour: the six-storey Toronto Harbour Commission Building, which was built in 1917. 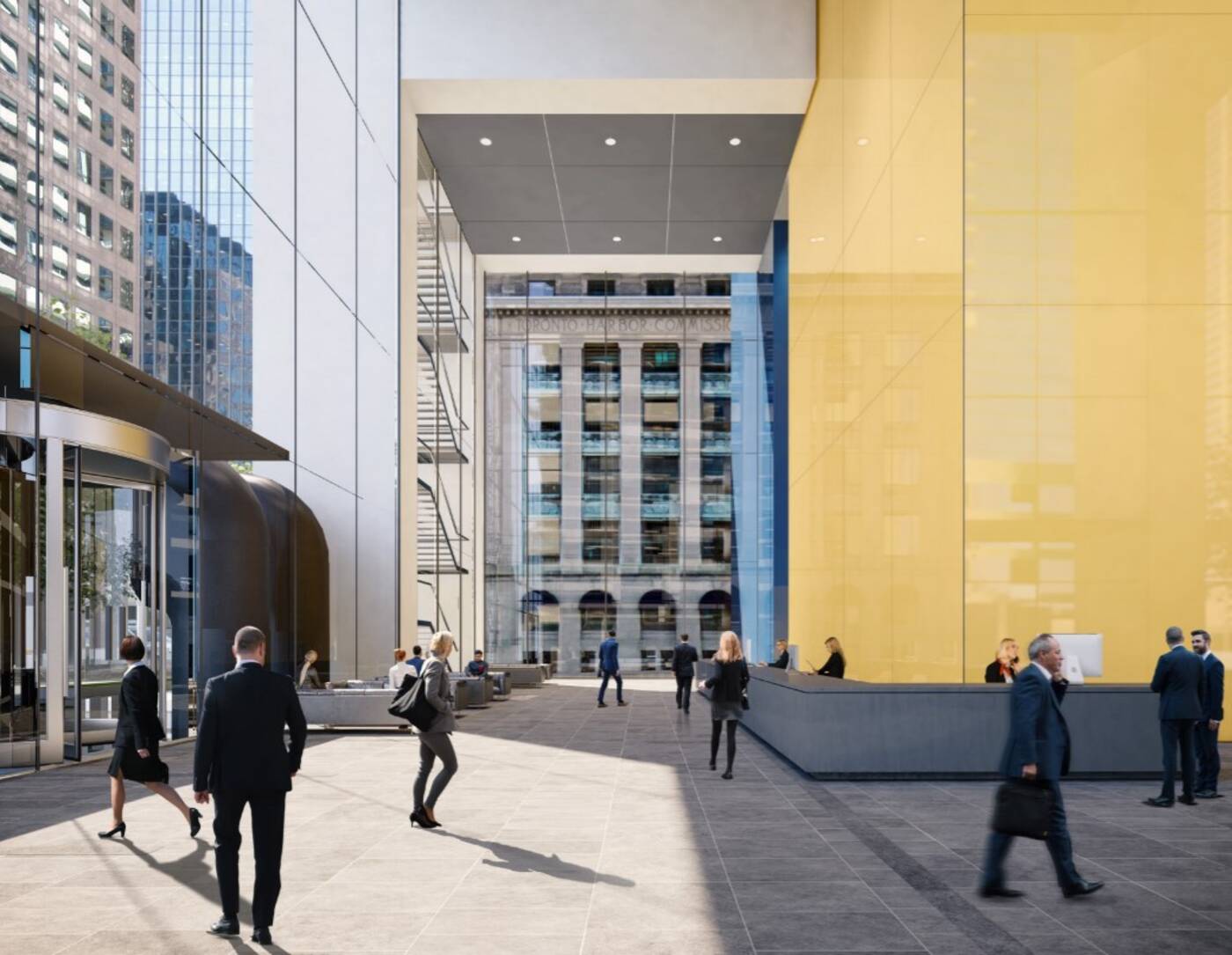 A glassy four-storey lobby will give visual access to the historic Toronto Harbour Commission Building. Photo by Oxford Properties via City of Toronto development application.

Nicknamed "The T", the historic building was sold to Oxford in 2017 for $96 million. Fun fact: The T is also reportedly haunted by the ghost of a janitor.

It's not entirely clear how the interior of the old Commission Building will play into The Hub's commercial workspace, but the design of the 57-storey building shows the strategic use of four columns to allow for distance between the main building and The T.

The two buildings will be connected by a "finely detailed glazed atrium." 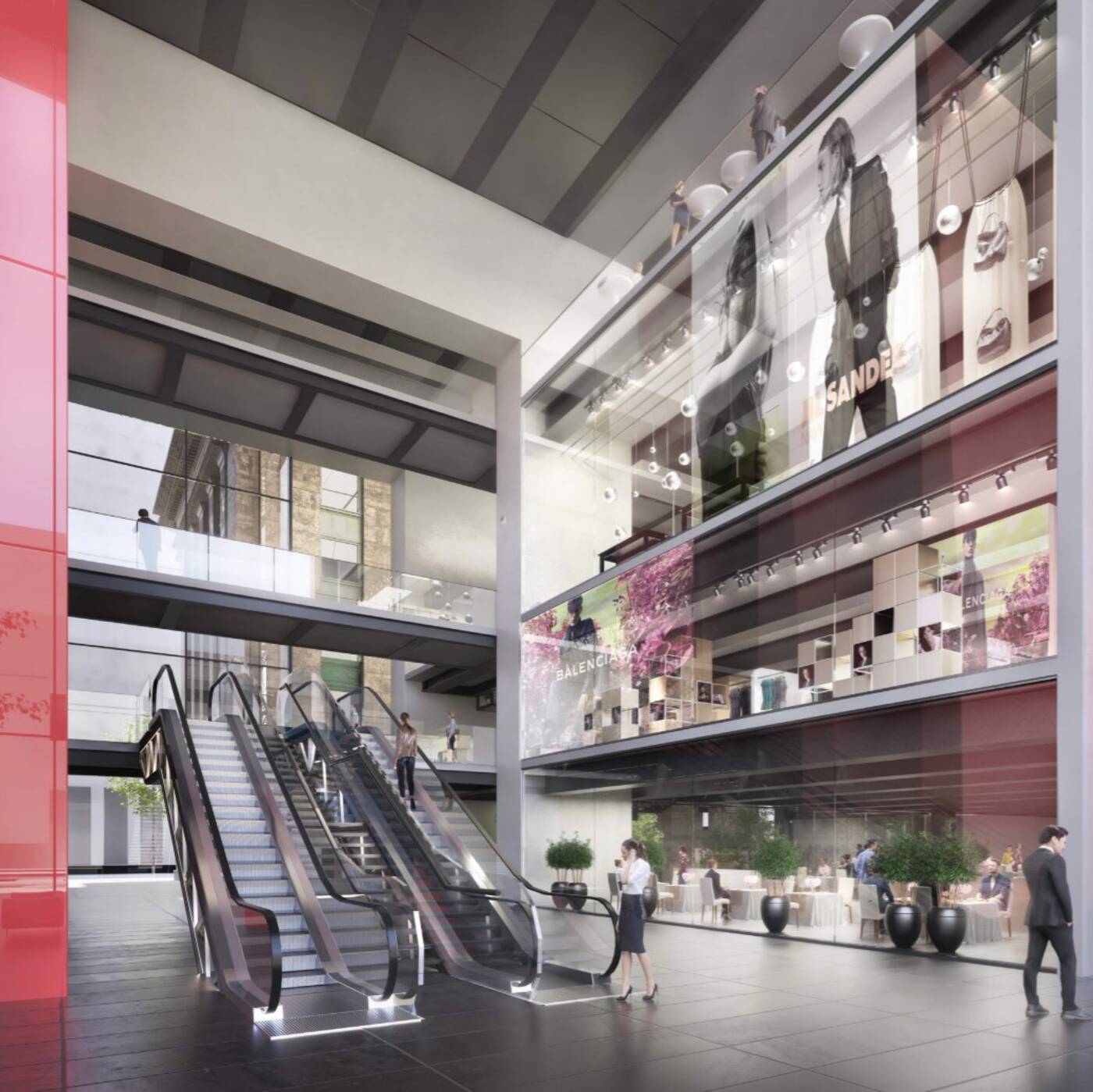 The new office tower will connect to The PATH network. Photo by Oxford Properties via City of Toronto development application.

Windows will stretch from floor to ceiling in the four-storey lobby, which will be home to restaurants, retail spaces, meeting and event spaces, and maybe a fitness facility.

Floors five to eight of the podium will see larger office floors. 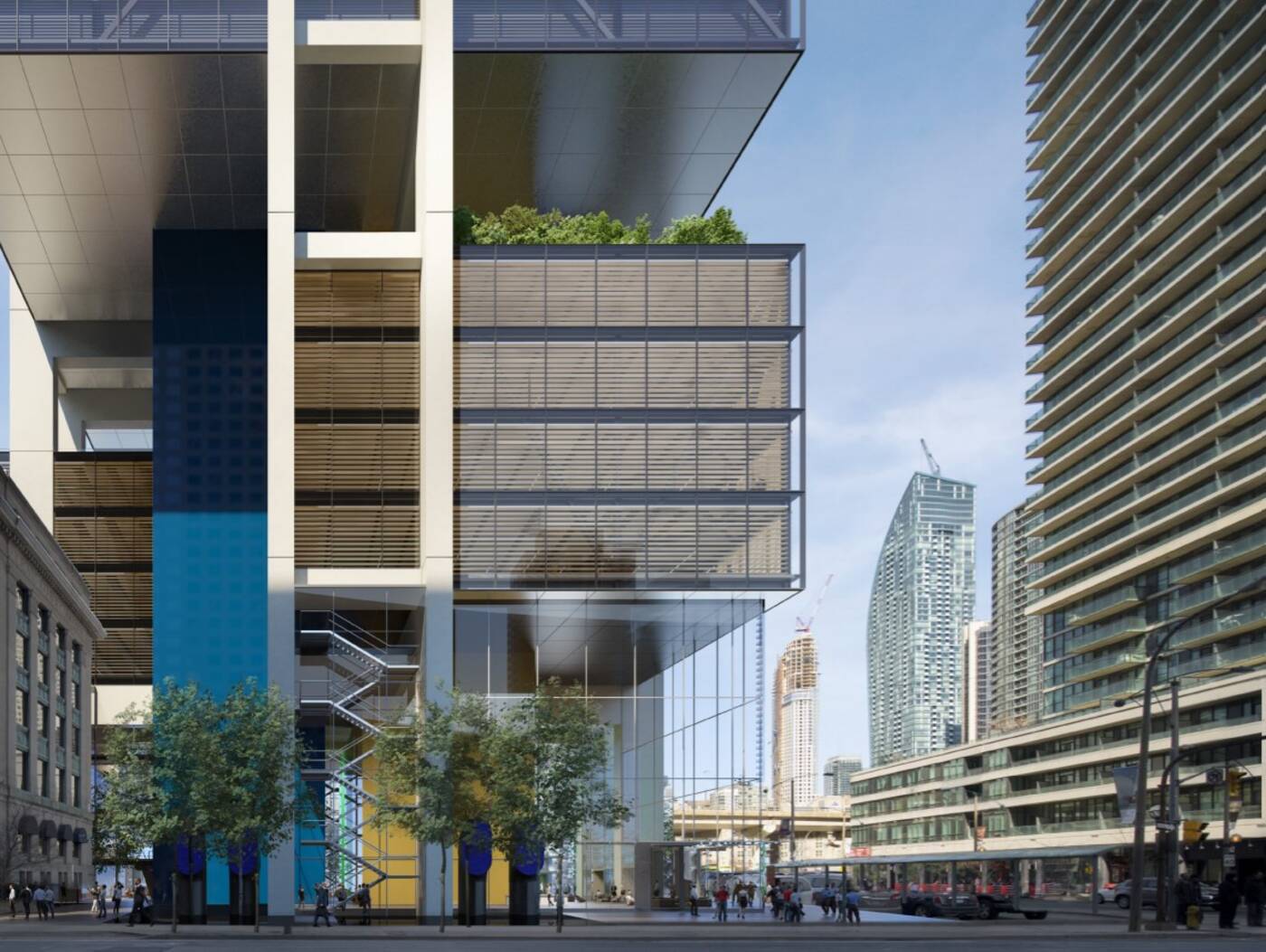 The Hub will see 1.4 million square feet of office space added to the corner of Bay and Harbour. Photo by Oxford Properties via City of Toronto development application.

A landscaped garden and terrace is being proposed for the roof of the eight-storey podium, and at the top three floors of the 57-storey building will be deluxe office spaces with a panamoric view of the city.

The Hub will be just steps away from Union Station (hence its name), and will sit just north of the Jack Layton Ferry Terminal. 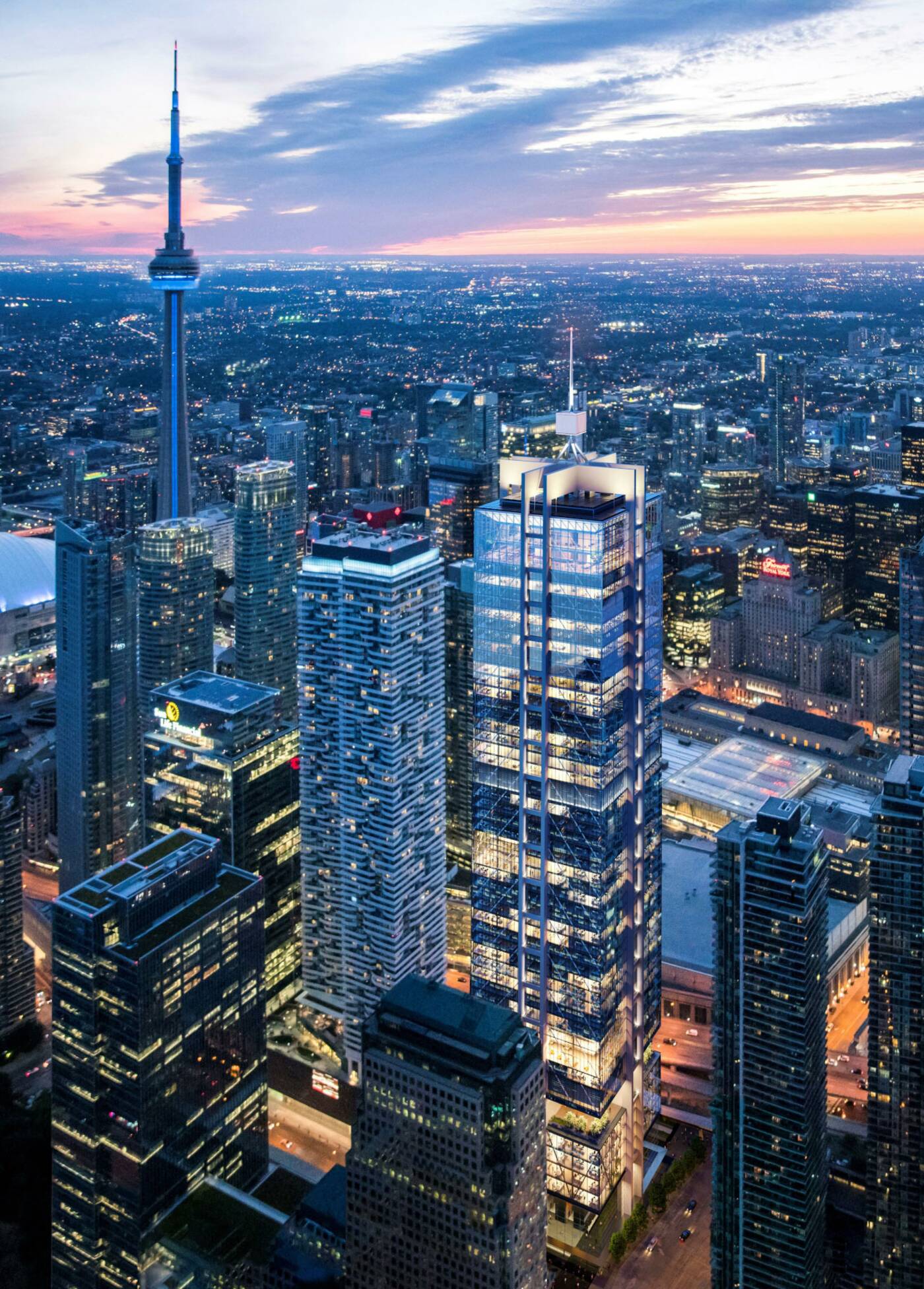