Average rent prices for condos and apartments in Toronto have been consistently declining thanks to the effects of the COVID-19 pandemic, and a new report suggests that trend is ongoing in many of the city's neighbourhoods.

According to the Toronto GTA July Rent Report 2020 from TorontoRentals.com and Bullpen Research & Consulting, the average rent for all property types (singles, semis, row, condo apartment, rental apartment, basement apartment) in the former City of Toronto (pre-amalgamation boundaries) is down 8 per cent year over year.

"When looking at data on the average rent for all property types in the Greater Toronto Area, the market continues to experience a decline," said Ben Meyers, president and owner of Bullpen Research & Consulting Inc., in a statement.

"However, when breaking down the data by property type, municipality, neighbourhood, and project, conflicting results arise."

The report indicates that asking rents for single-family, townhouse and basement apartment listings on TorontoRentals.com actually increased  from the first quarter to the second.

But, unsurpisingly at this point, condominium apartments for rent in the former City of Toronto, also known as Old Toronto, were nearly $260 cheaper per month in the second quarter of 2020 compared to the same period last year.

And when looking at the average rent for condominium and rental apartments in the 10 neighbourhoods in Old Toronto for Q2, rent declines are fairly consistent across the board. 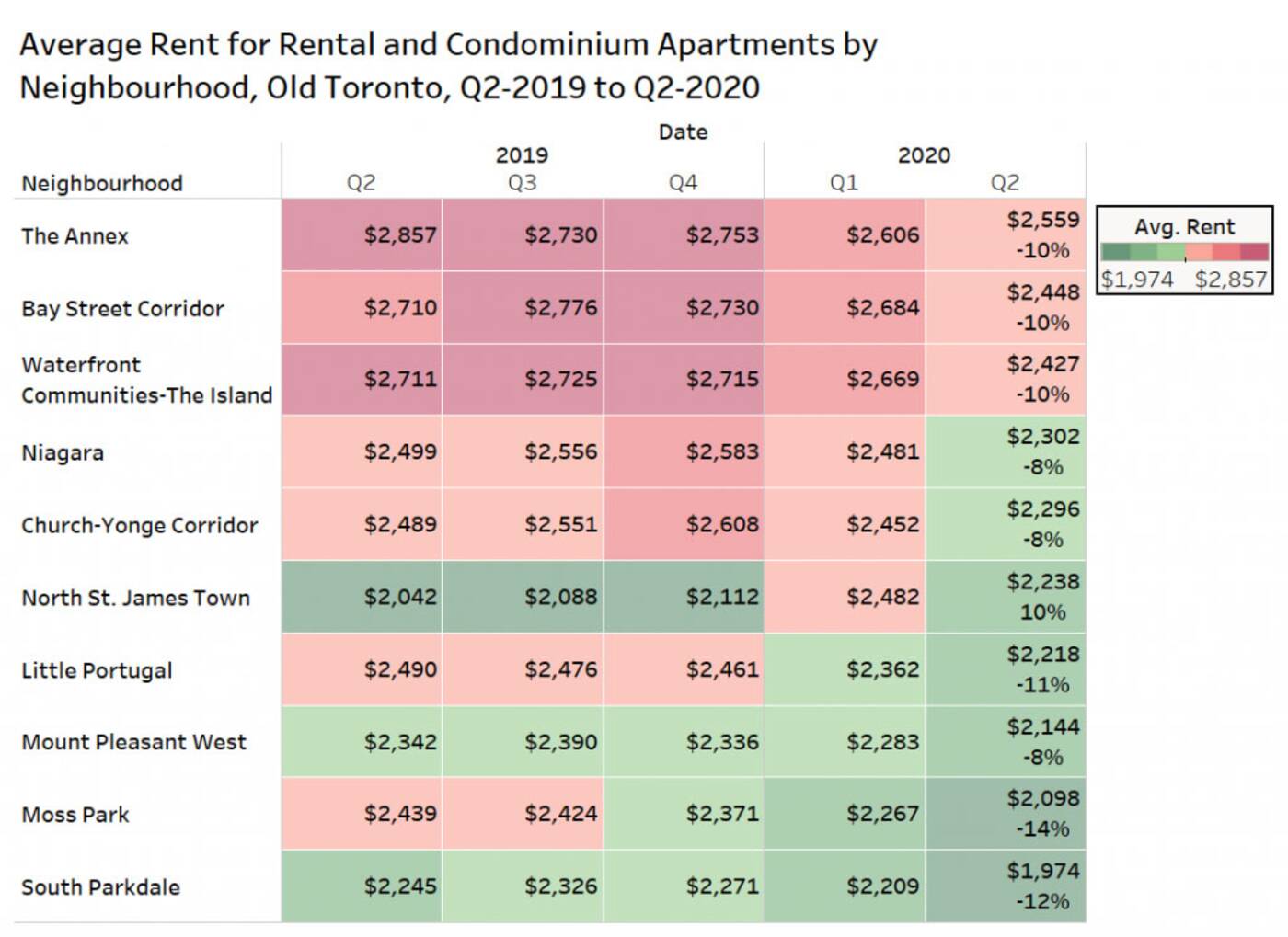 Average rent by neighbourhood in Toronto.

The only area to experience an increase in its annual average rental price in Q2 was North St. James Town, but the report points to a logical explanation for this.

"Rents are up 10% annually in North St. James Town, but the area was boosted by an increase in the number of listings on TorontoRentals.com at the new high-end purpose-built rental apartment called The Selby on Sherbourne, south of Bloor," notes the report.

"The biggest decline was seen in the Moss Park area with a 14% annual decline. A condominium apartment at 320 Richmond Street East called The Modern, which was one of the most active projects in terms of monthly listings in that area, witnessed a 20% rent decline annually."

According to Meyers, the overall declines can be partially attributed to the many homes which were previously being used as short-term units and are now hitting the regular market.

"The 2,229 condominium apartment completions in May was the third highest monthly total over the last three years per CMHC data, and a significant portion of those units were purchased by investors and are hitting the rental market."

On top of all this, Meyers says it's still too soon to truly understand how damaged the market has been by COVID-19.

"It will still take several months to assess the damage done to the market by COVID-19, when all of the GTA enters Stage 3 of the re-opening," he said, "and we are able to see data on how many employees are hired back to their previous jobs, and how quickly consumers start spending again."