The average rent for an apartment in Toronto continues to fall

Average rent for listings in Toronto continue to drop after months of falling prices in response to the ongoing pandemic.

For the sixth consecutive month, the average rent for all property types in Toronto CMA have declined, from around $2,362 in April to $2,266 in May.

According to the June 2020 Rent Report from Rentals.ca, rent per-square-foot in Toronto also fell 3.5 per cent in May 2020 from the same time last year.

For average rental apartment and condo apartment rental rates, Toronto saw a 0.5 per cent drop in May 2020 — far less steep than April's 5.9 per cent monthly drop — with the average rent being $2,290.

And renting downtown has gotten much less expensive, too: apartment properties in the M5E area code have dropped $449 since last year, from $3,029 to $2,580.

A report from TorontoRentals.com and Bullpen Research & Consulting Inc. noted that the surge in supply can be attributed to the influx of short-term rentals, like Airbnbs accommodating tourists, into the full-time market due to COVID-19 travel bans. 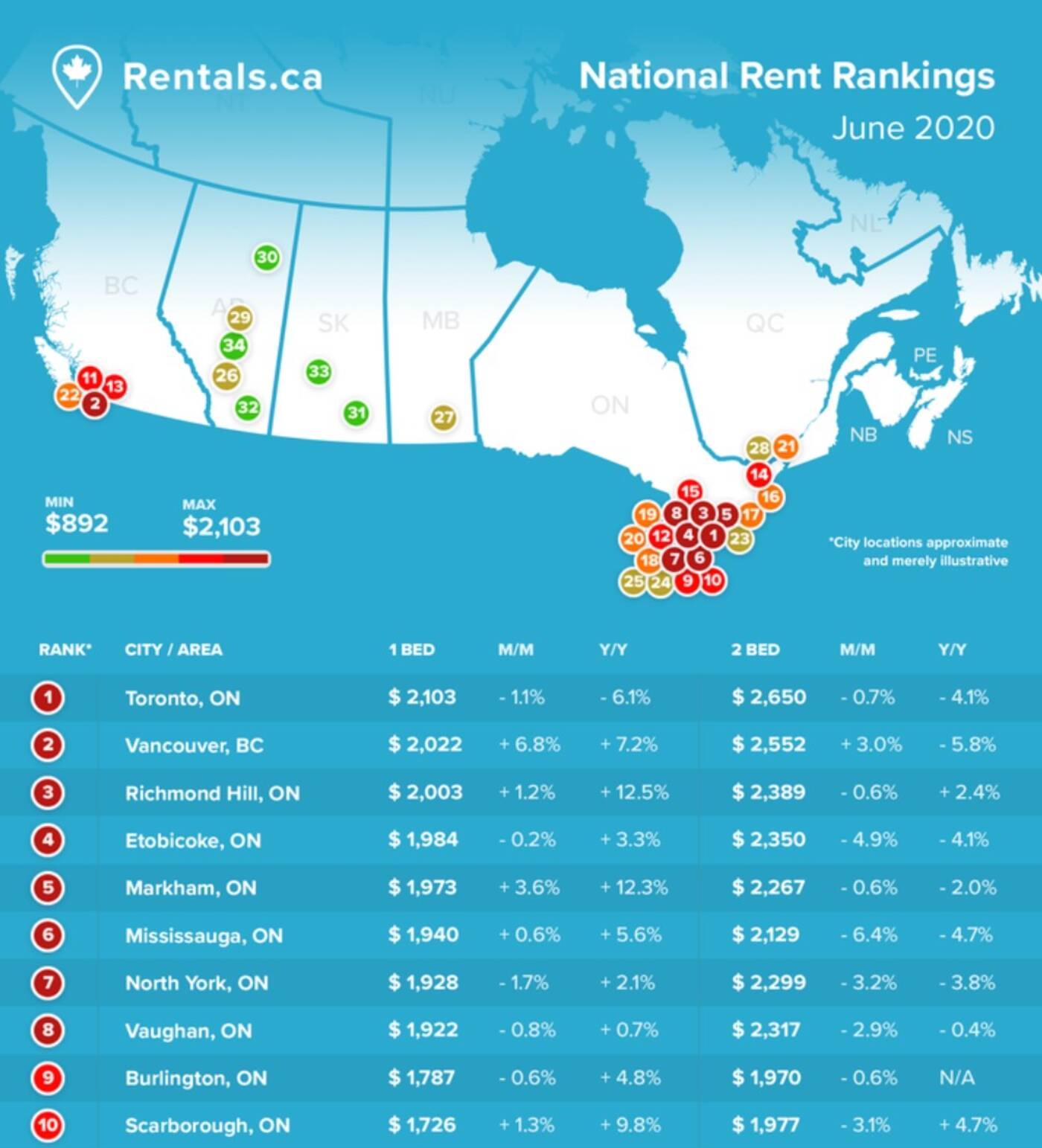 A chart from Rentals.ca shows the average price of one- and two-bedrooms in Toronto dropping month to month. Via Rentals.ca.

"The pandemic health concerns, coupled with reduced employment and hiring activity, has resulted in less immigration and reduced in-migration into the GTA," said the report.

"These consequences of the pandemic have significantly reduced rental demand at the same time as supply is increasing via short-term rentals and high-rise apartment completions."

The report also predicts another wave of more rental units hitting the market when Ontario lifts its eviction ban.

But there's also evidence that, while demand won't be back to where it once was anytime soon, tenants are researching properties again, according to numbers gathered by page views by postal code on the TorontoRentals site.

The M5V code (the downtown area that includes CityPlace, King West, and the Entertainment District) had page views that increased by 20 per cent month-over-month, while the M5A area (which runs south of College between Jarvis and the DVP) saw an increase of 29 per cent from May to April.

TorontoRentals said that rental rates might not get any lower: "...Because demand for rental accommodation is expected to pick up as the lockdown ends recent graduates start their careers, people cooped up with family or roommates look for their own place, and the border opens up to foreign students, temporary residents, contract workers, and immigrants."