There's nothing like a global pandemic to cool down a boiling hot real estate market, it seems, as anyone buying or selling a home in Toronto right now can tell you.

Just a month after posting a staggering year-over-year sales increase of 45.6 per cent in February of 2020, home sales have fallen off a cliff across the GTA due to what most experts believe to be the ongoing public health crisis.

"It's evident that COVID-19 is having a far-reaching impact on the Canadian economy and healthcare system," wrote the real estate brokerage and analysis firm Zoocasa in a new report published Thursday.

"Although the Greater Toronto Area real estate market was previously gearing up for a busy spring season, policy and physical distancing measures resulting from Ontario's state of emergency declaration put a damper on much of the expected sales activity."

And the Toronto Regional Real Estate Board (TRREB)'s most recent numbers from March only offer a preview of what's expected down the line: Strong sales reported in the first half of the month, before the lockdown came into effect on March 17, helped buoy overall sales figures.

In an effort to get a more accurate reading of how things have changed since all non-essential services were forced to close, Zoocasa crunched the numbers over a four-week-long period beginning March 16 and ending April 15.

The agency compared home sales and pricing data against the same period of time last year and found that, while prices actually increased, sales have dropped by more than 50 per cent since spring of 2019 in most of the GTA.

Durham Region is the one exception to this rule, posting a sales decline of just 30 per cent year-over-year.

There are also two notable exceptions in terms of price: The sub-regions of Toronto Central and King in York both saw prices fall year over year, by one per cent and two per cent respectively.

Home prices across the city as a whole grew about 4 per cent over what was observed during the same period of time last year, with Toronto East posting the largest gain at 14 per cent.

You can see Zoocasa's full "snapshot of where average prices and home sales landed in each GTA region for March 16 to April 15, one month after COVID-19 measures were introduced by Ontario" here. 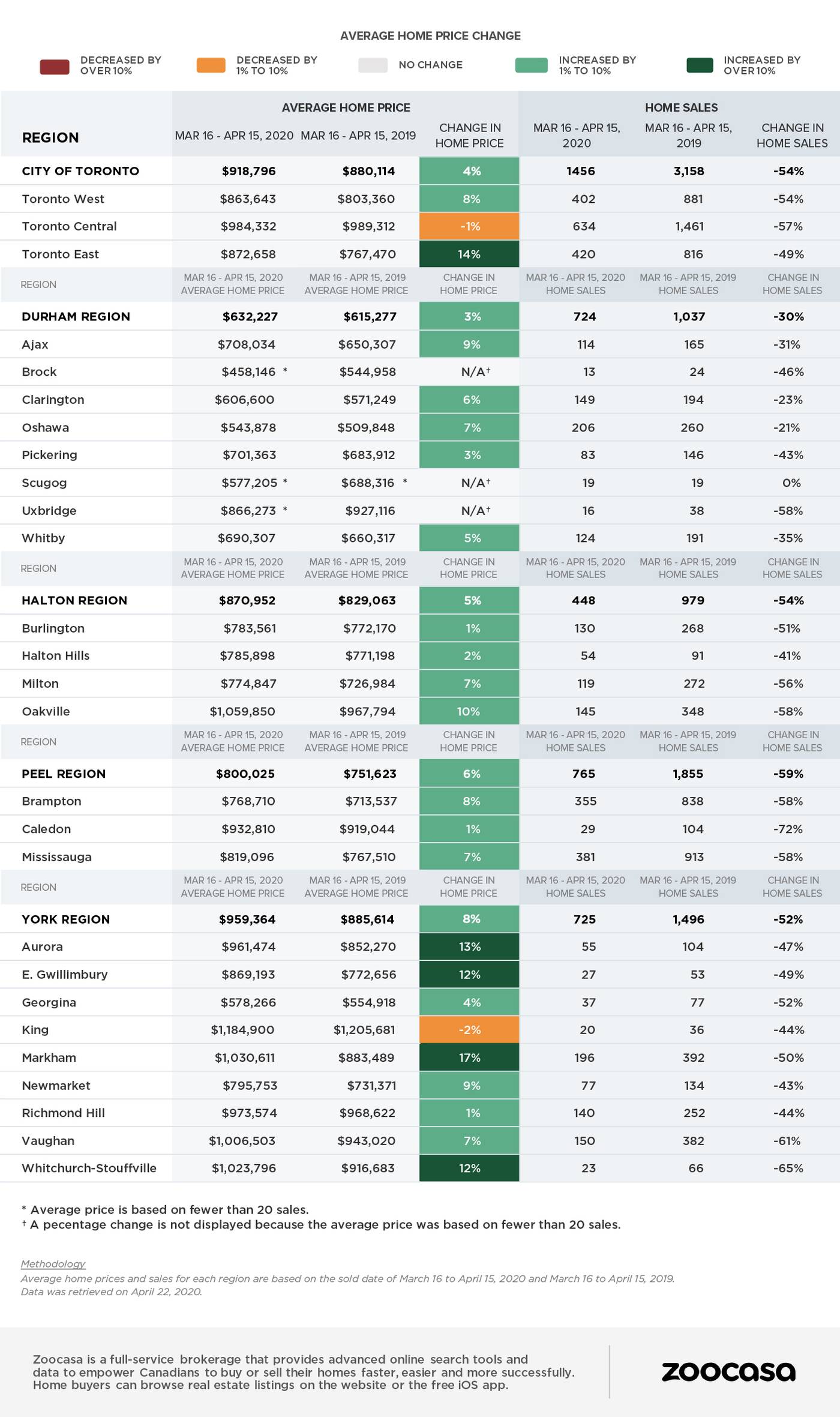