Seneca College unveiled a new building at its Newnham Campus in North York, and its design was inspired by Indigenous principles, artwork and history.

The school's new Centre for Innovation, Technology and Entrepreneurship (CITE) has an entirely Indigenous-led design, which is part of Seneca's commitment to the Indigenous Education Protocol signed back in 2015.

The building was designed by global architecture and design firm Perkins and Will, and they worked in collaboration with the First Peoples@Seneca Office to ensure the new structure accurately incorporated Indigenous principles.

The new CITE houses state-of-the art engineering and robotics labs as well as an entrepreneurial incubator for students and industry leaders. 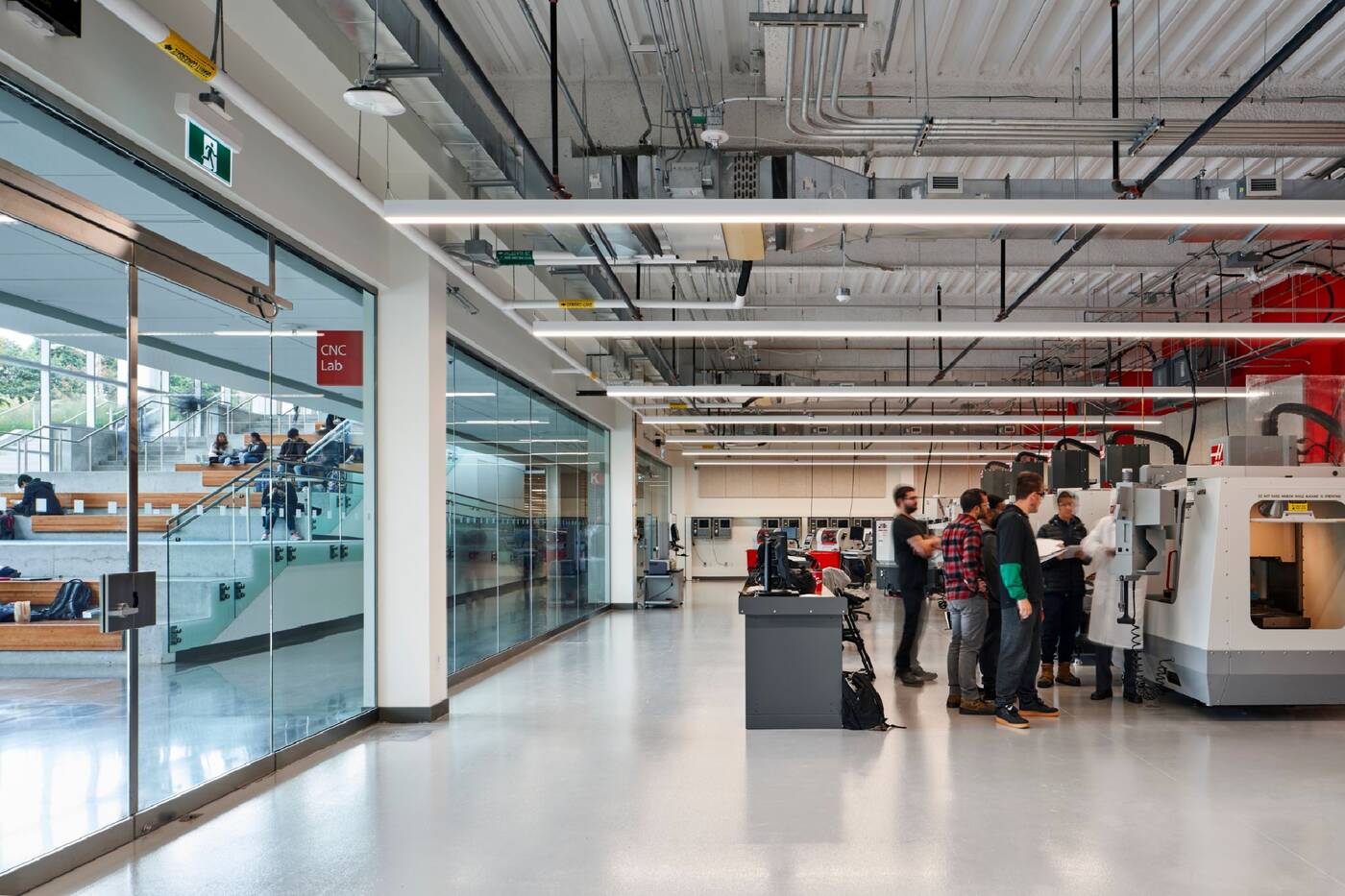 At a size of about 274,000 square feet, it provides students with multiple levels of flexible classrooms, "breakout spaces," open-concept study areas and lounges as well as an expansive event space.

It also features eight graphic murals that explore the relationship between Indigenous cultural elements and technology.

In the building's large atrium, a 10-metre-diameter terrazzo medallion — designed by artist Joseph Sagaj called the "Circle of Indigenous Knowledge" — can be found featuring symbols and cultures of First Nations people of the Great Lakes, the Metis and the Inuit of the Arctic. 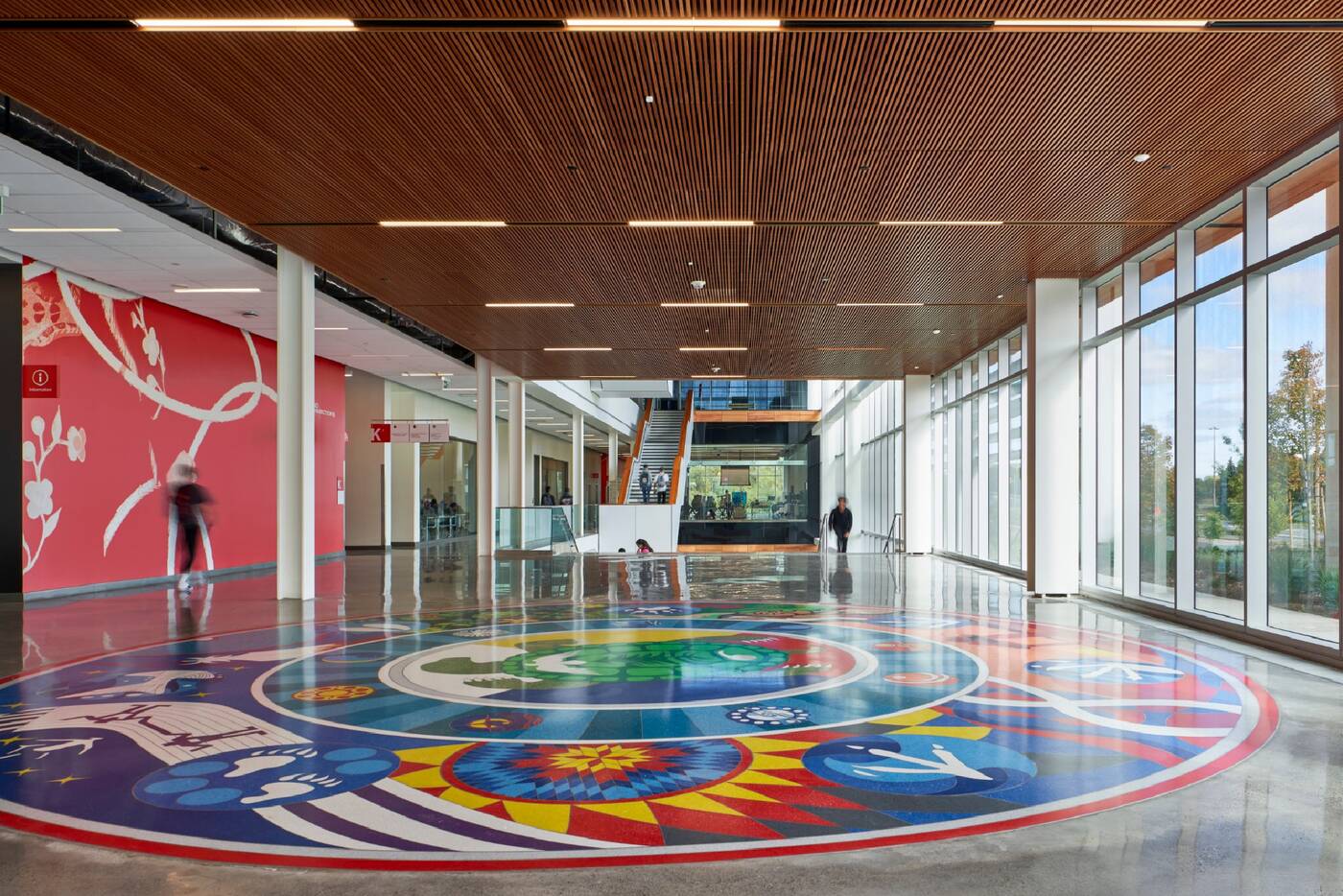 The "Circle of Indigenous Knowledge" features many cultural symbols

In the third-floor student lounge, a glowing light fixture projects a light show similar to the northern lights when viewed from the street. 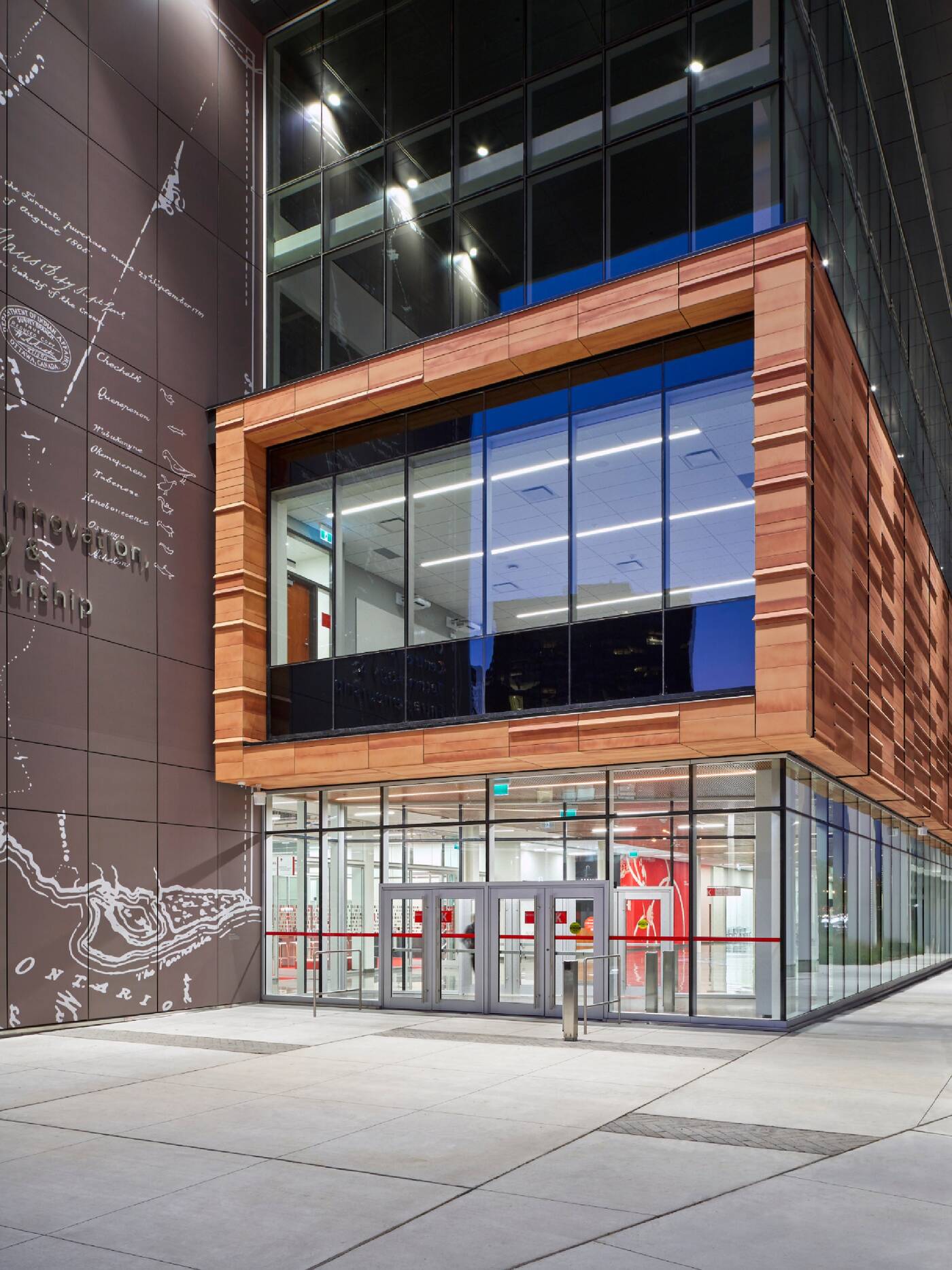 From the street, passersby can see a light show similar to the northern lights 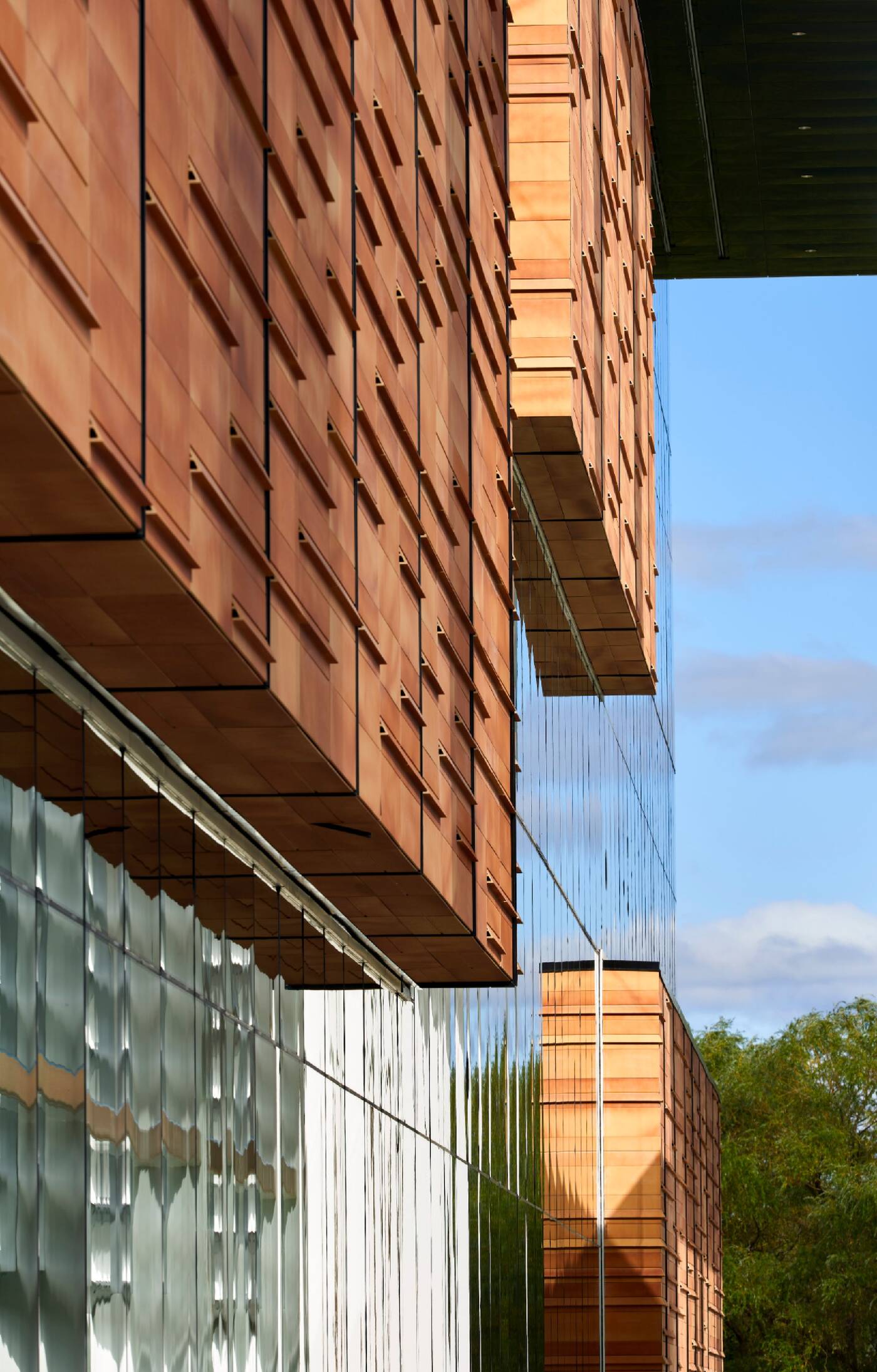 One entrance, facing Finch Avenue, features the signature page and map from the 1787 Toronto Purchase land deal between the Mississaugas of the Credit and the British Crown, while the other entrance includes a map of the universe — representing the progression of technology since the treaty was signed.

The facade of the building is also lined with 13 columns, each representing the 13 moons of the lunar cycle with the corresponding names in Anishnaabe. 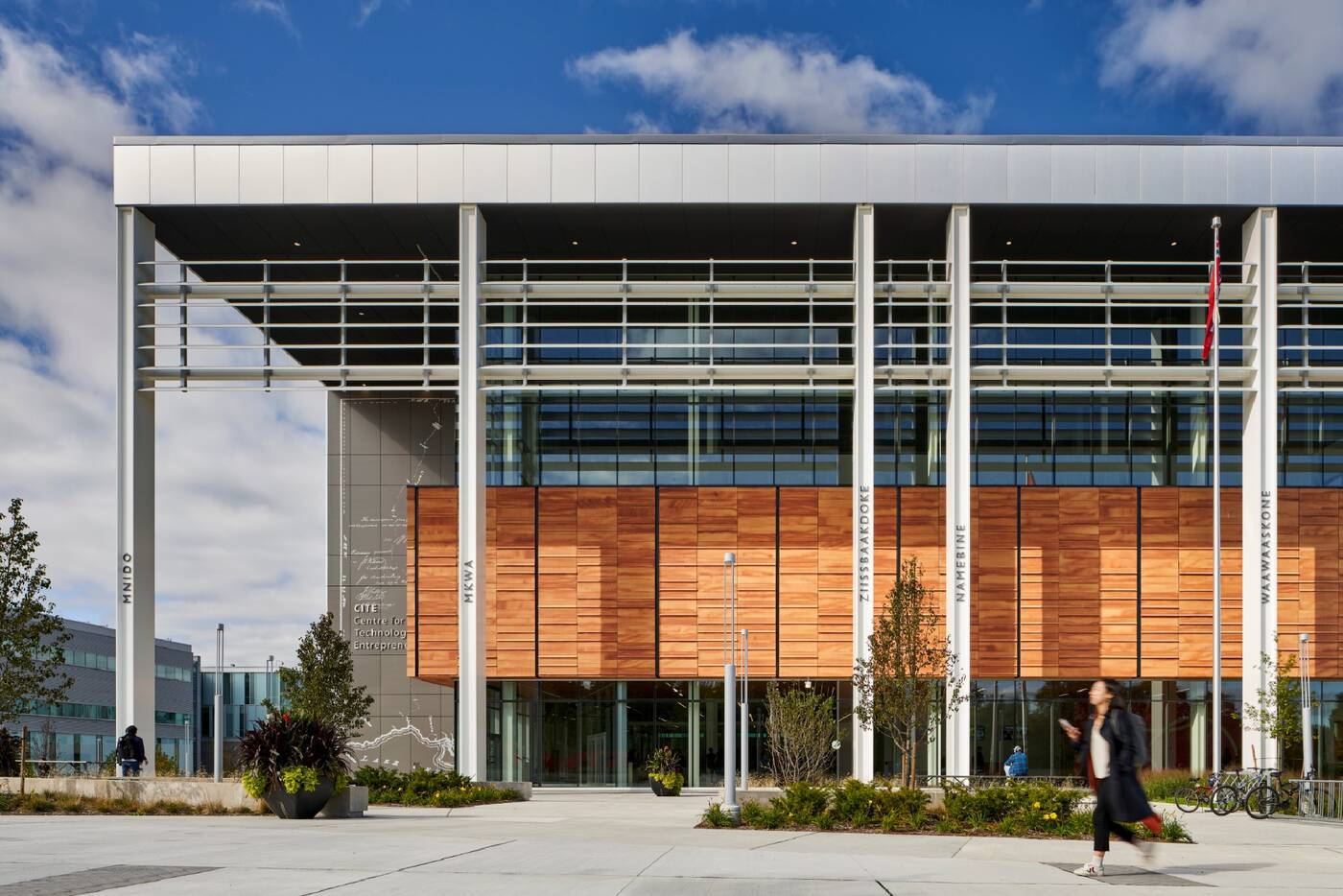 "CITE presented the perfect opportunity to show how Indigenous knowledge can guide post-secondary education. To provide a more sustainable vision for future innovation, we paired themes like the Internet, space exploration and coding with Indigenous knowledge spanning seven generations," said Andrew Frontini, principal and design director at Perkins and Will’s Toronto studio, in a statement.

"We organized the structural order of the building elements of the building to support these themes. As you walk through CITE, you encounter overlapping Indigenous and technological stories that initially might speak to different audiences, but over time our hope is that they merge together as one."