Centennial College is expanding their Progress Campus in Scarborough, and new renderings of the project reveal a beautiful design that honours the college’s commitment to Truth and Reconciliation.

The school held a design competition for its A-Block expansion building in the fall of 2019, and they've finally selected and approved the winning Design Build proposal by EllisDon, along with DIALOG and Smoke Architecture.

When completed, Centennial College says it will help accommodate its growing student enrolment. 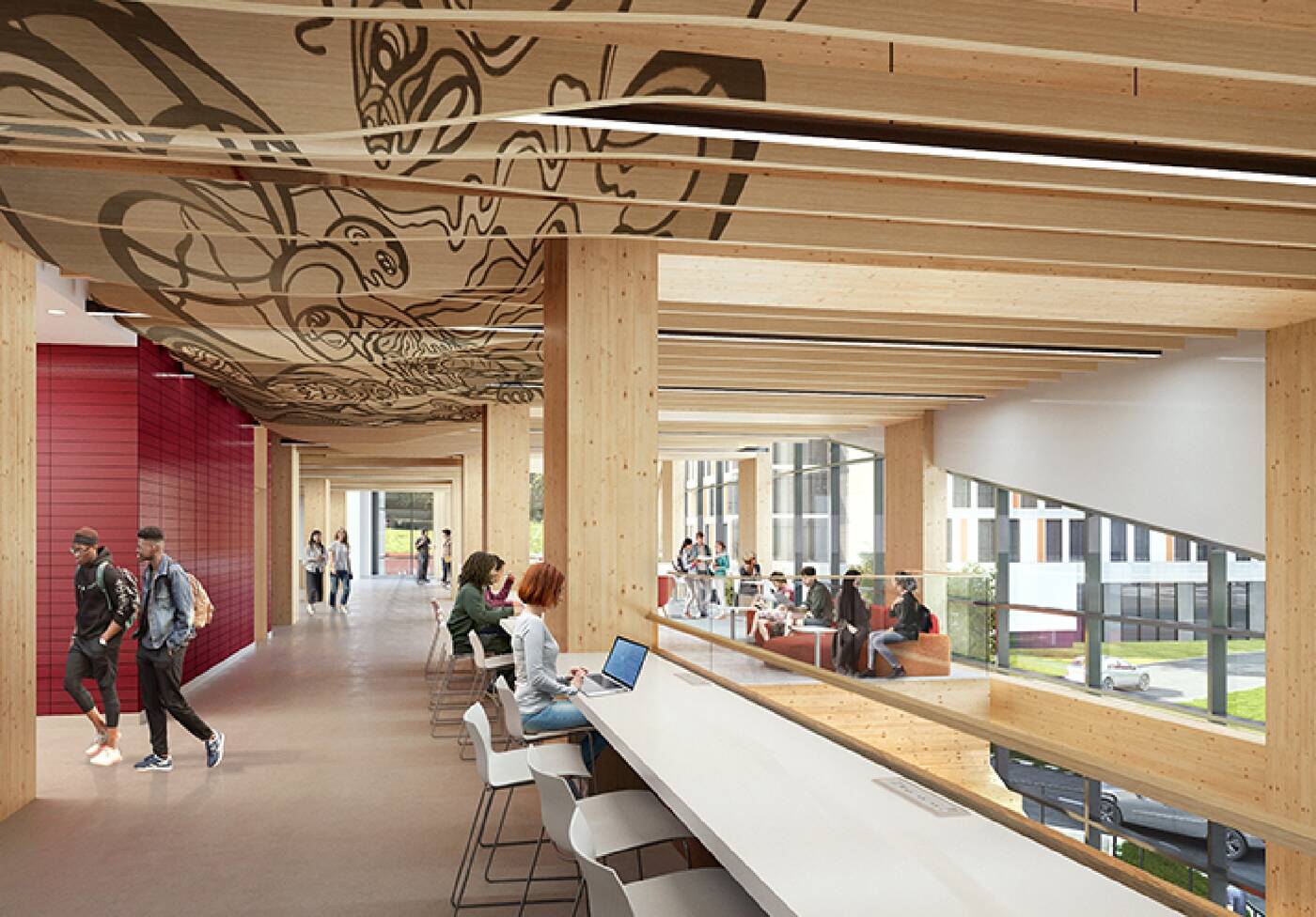 The expasion will include several common areas

The expansion — which includes a six-storey addition with 150,000 gross square feet of space — will be the new face of the existing A-Block building and serve as the "distinctive gateway" to Progress Campus.

It's set to be composed of a combination of both academic and common areas.

According to DIALOG, the project has the potential to become the first net-zero carbon, mass timber, higher-education facility in Ontario when it’s completed in 2023. 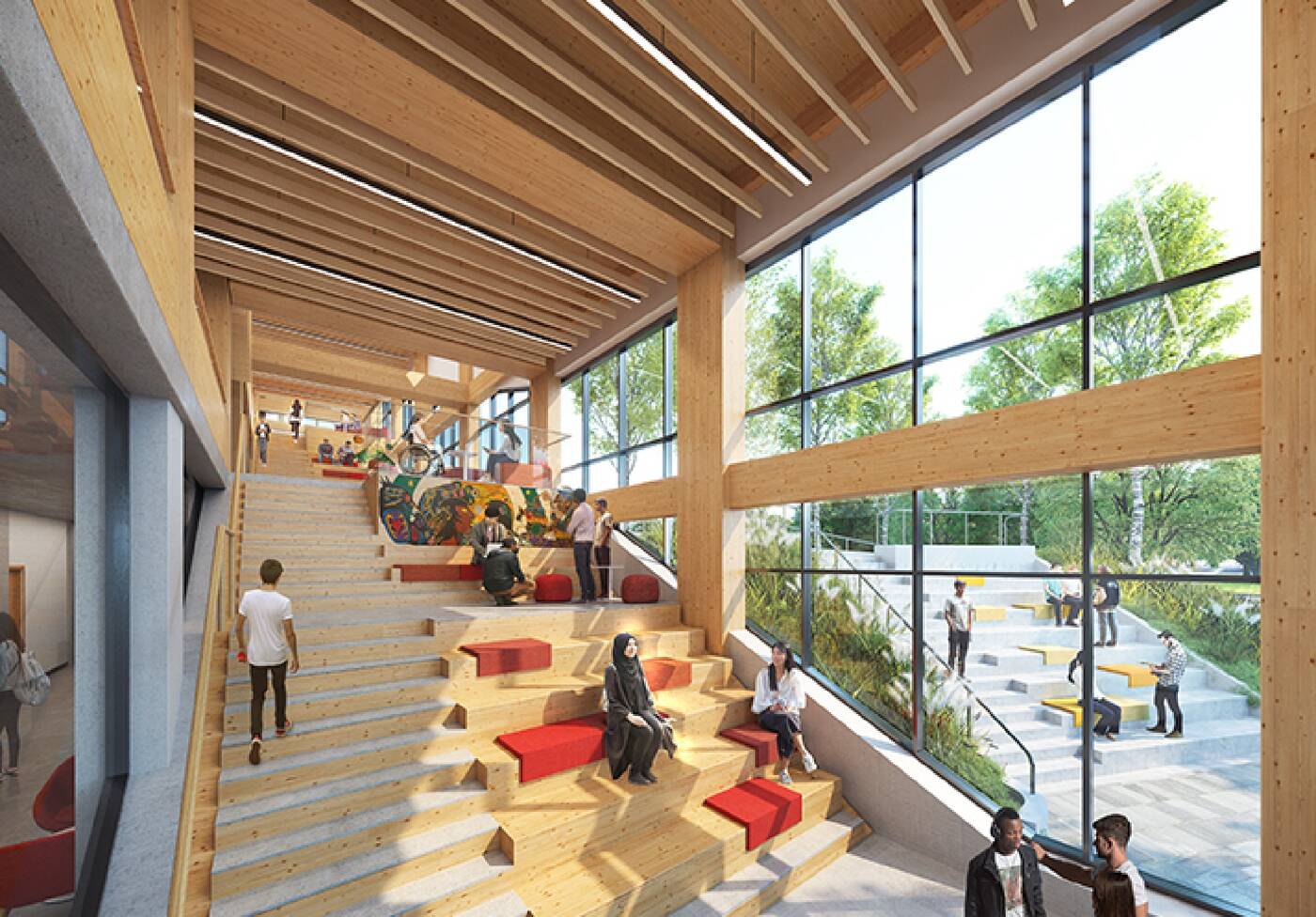 The building's interior will feature lots of exposed wood

Both the University of Toronto and George Brown College have plans for mass-timber buildings, according to Urban Toronto, but they won't be completed for several years.

The expansion will also include flexible classrooms "that support Indigenous ways of teaching and being, as well as support areas such as Wisdom Hall, an engaging student touchdown space, along with collaborative spaces, administrative offices and food services." 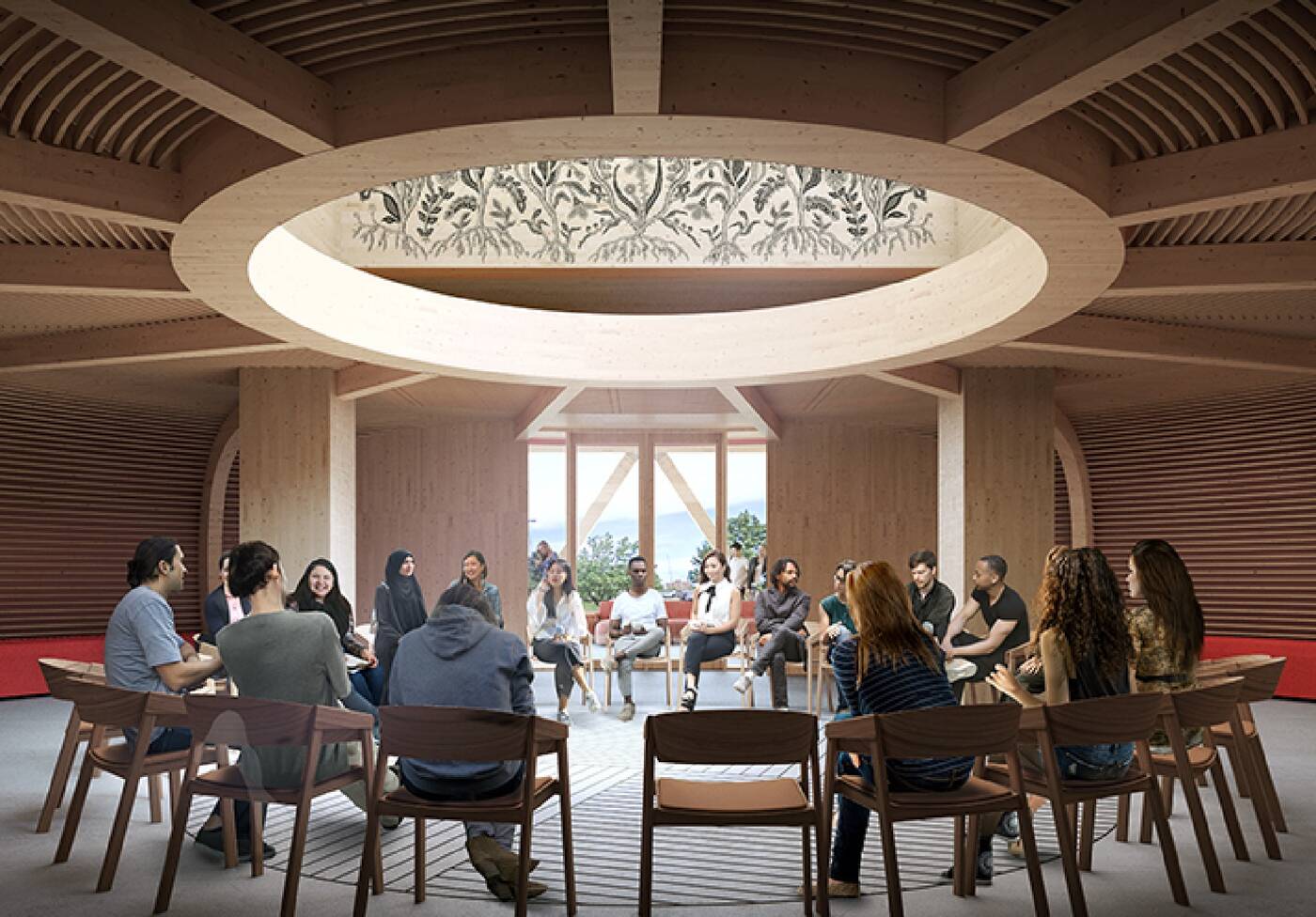 The heart of the building will be the circular Indigenous Commons

"This building is a significant first step towards realizing the goals outlined in the College's Indigenous Framework and advancing our commitment to Truth and Reconciliation with the Indigenous peoples of Canada," reads a description of the project.

"The building design inside and out will reflect Indigenous values and principles, and is based on the concept of 'two-eyed seeing' -- viewing the world through the lens of Indigenous knowledge and the lens of Western knowledge." 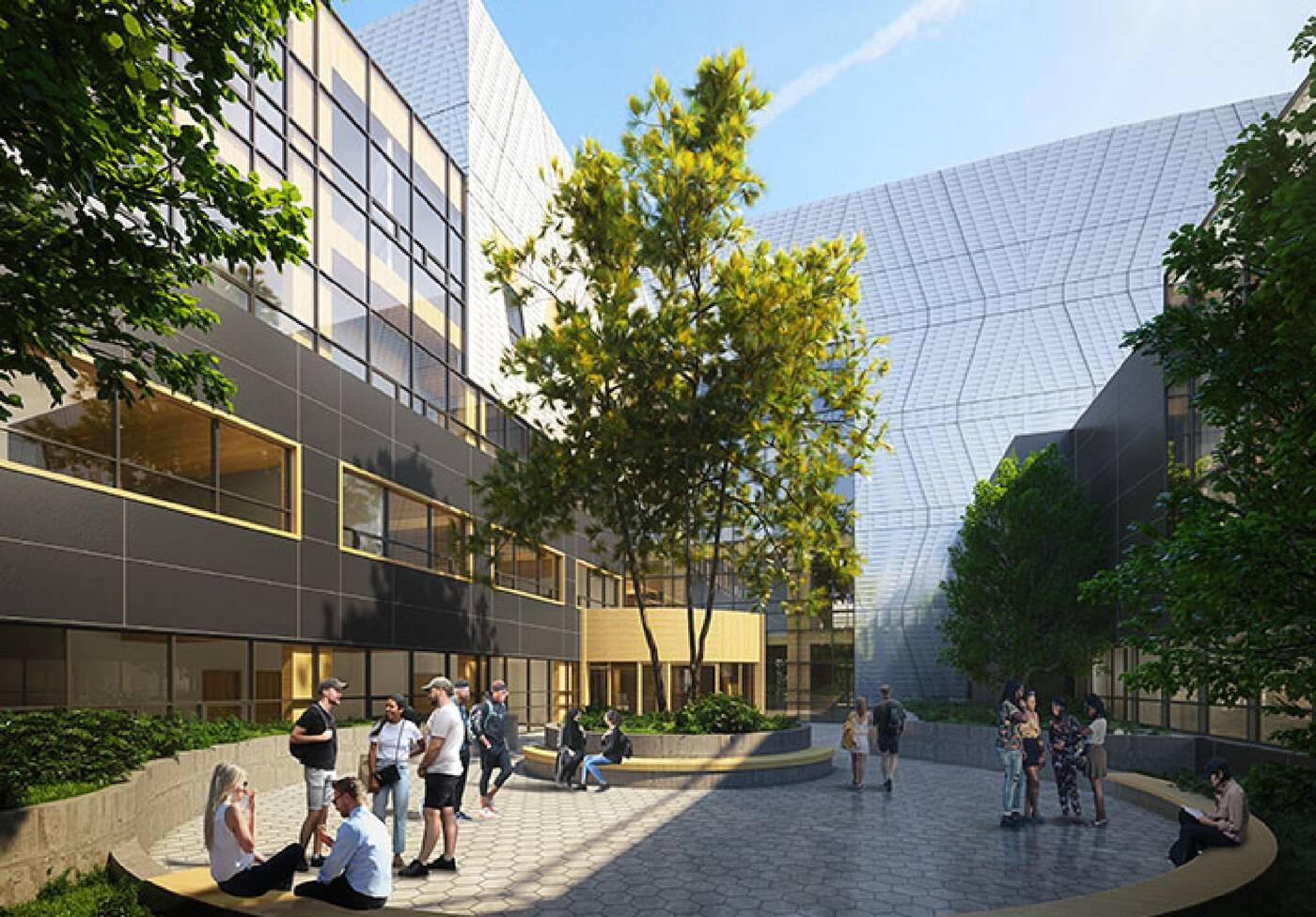 The main entrance to the building will be in the east, which is the traditional location for the entrance in Indigenous structures. 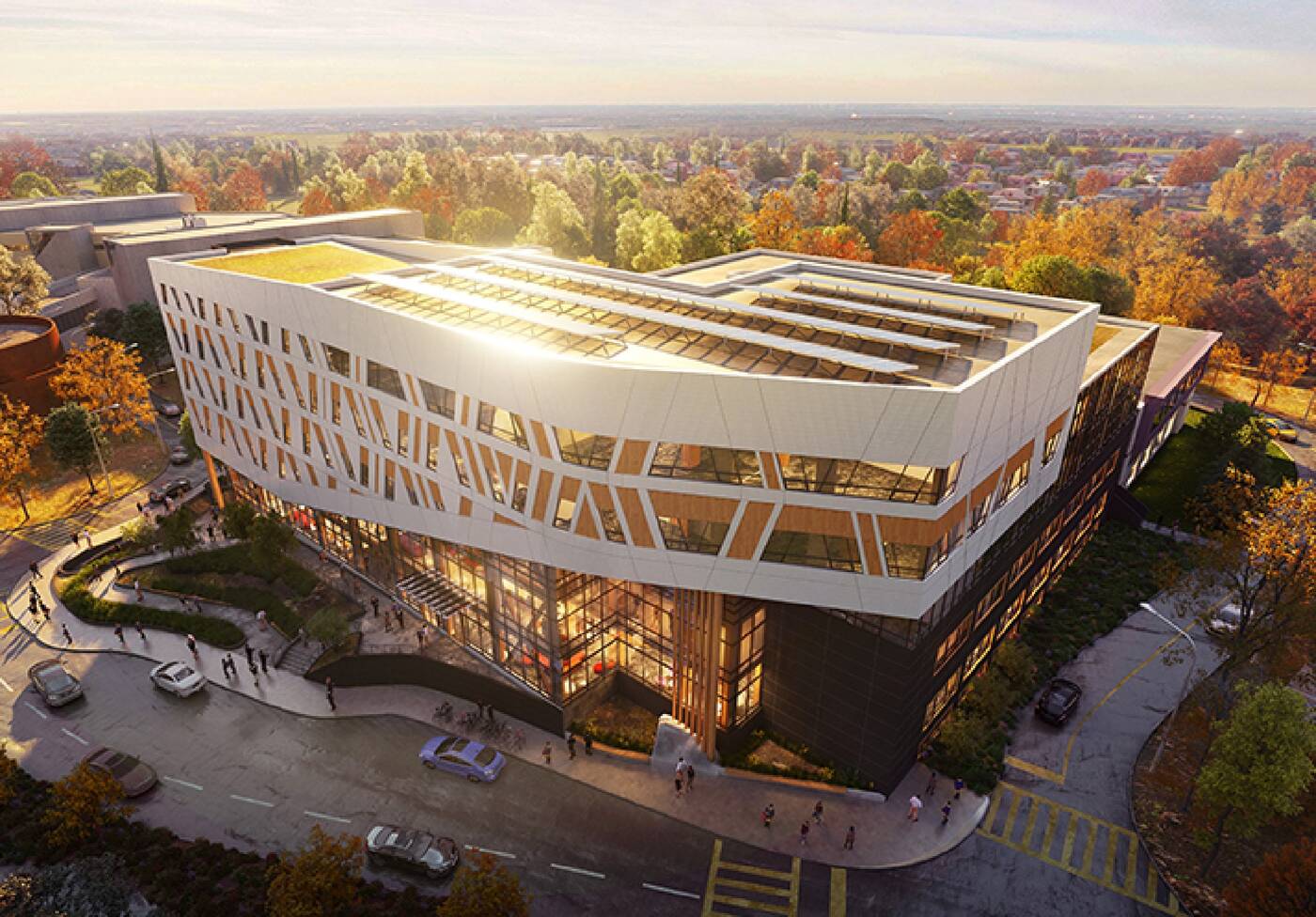 The building's facade will be covered in aluminium shingles

Interior A-block renovations will begin in late June, and full site construction will start in the fall.

The project is expected to be mostly completed by the fall of 2022 and building occupancy is scheduled for January 2023.