Thinking about purchasing your first home?

So are a lot of people — but it's easier said than done in a market like Toronto, where the average house and condo now cost more than $1.3 million and $660,000, respectively.

Canada's federal government has several "special withdrawal programs" in place meant to help first-time buyers come up with down payments to buy or build homes for themselves.

The popular Home Buyers' Plan allows you to take up to $35,000 out of your own Registered Retirement Savings Plan (RRSP) — an account which is usually inaccessible until retirement, unless you want to pay a boatload of taxes — penalty free.

It's a helpful tool for those who've been using RRSPs for some time and maximizing their contributions — but let's face it, few young people in Toronto have the financial bandwidth to sock away 18 per cent of their entire earned income each year for retirement.

With this in mind, the Canadian real estate brokerage and analysis firm Zoocasa set out to calculate how long it would take someone starting from scratch to save $35K in RRSPs to take advantage of the HBP.

The amount of time varies by income level, obviously, but also by city.

In Ottawa, where the median household income is $44,700, it would take someone earning that exact amount 4.3 years to save $35,000 for the HBP — and that's only if they contribute the maximum amount of of $8,046 to their RRSPs each  year.

By contrast, it would take a Toronto resident making the median market amount of $32,600 roughly six years to save the same amount of money by socking away 18 per cent of their earnings ($5,868) annually.

Someone within the top 10 per cent of earners in Toronto making more than $101,700 could do the same in about 1.9 years.

Of course, the maximum $35,000 RRSP withdrawal goes a lot further toward the purchase price of a home in smaller markets than it does in huge urban centres. 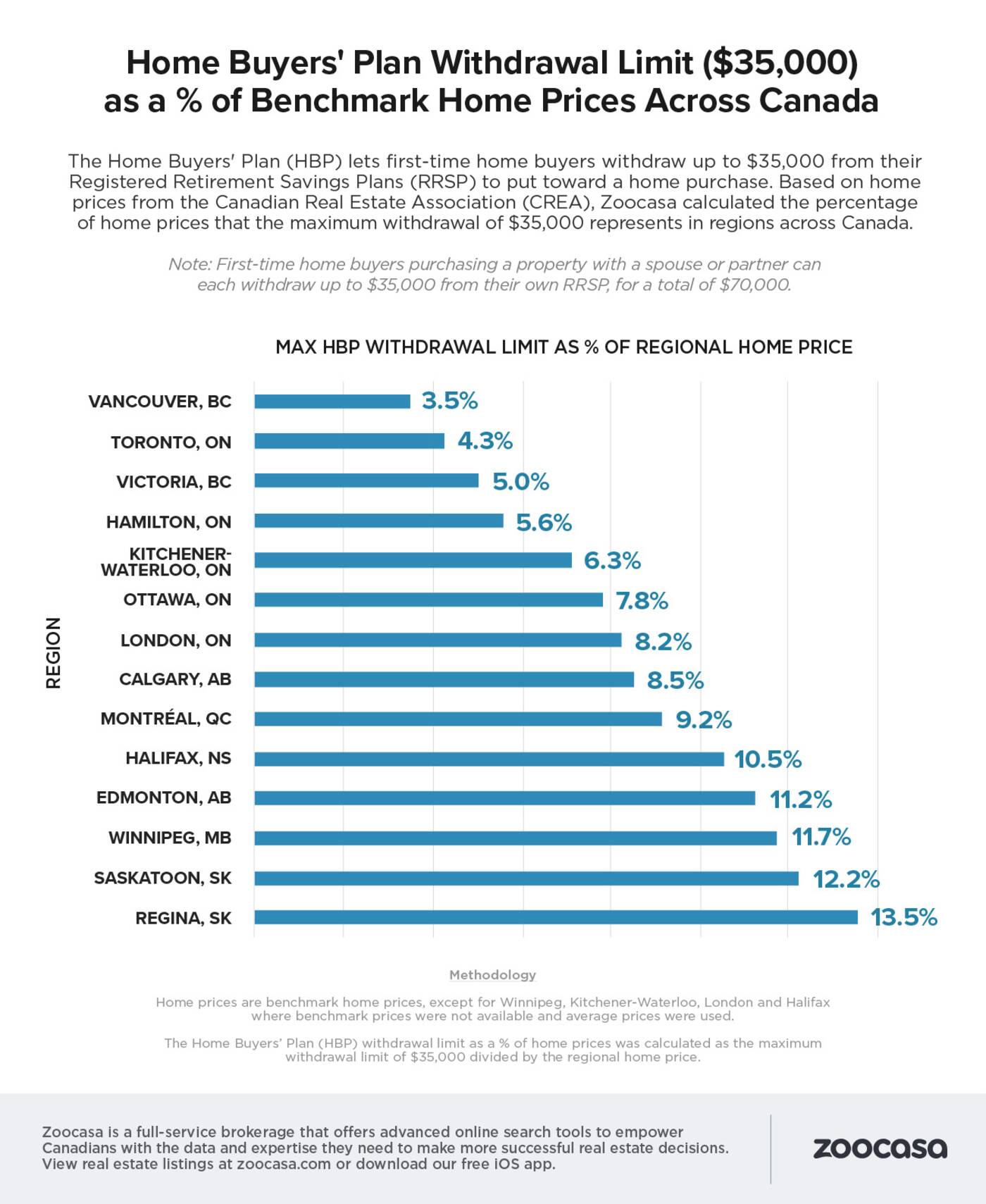 Zoocasa also calculated how far $35,000 would go toward the total purchase price of a home in different Canadian cities as part of their most-recent report.

Needless to say, the amount varies by quite a bit.

In Toronto, someone who pulls out the maximum tax-free $35,000 through Canada's Home Buyer's Benefit would only have enough money to cover 4.3 per cent of a new home.

Regina residents, on the other hand, would have a whopping 13.5 per ent of their total purchase price (less than $300,000, on average, according to Zoocasa) with the same amount of money.

"While the federal government increased the maximum withdrawal limit to $35,000 for the HBP from the previous $25,000 in the 2019 budget, housing analysts have questioned whether this amount is enough to truly aid buyers in Canada's largest markets," writes the real estate firm.

"For example, assuming a home buyer has saved and accessed the maximum $35,000 from their RRSP, that would account for just 3.5 per cent of a home purchase in Vancouver, and 4.3 per cent of the benchmark price for Toronto real estate — less than the minimum 5 – 7.5 per cent down payment required to purchase a home."

In other words, you need to be making a lot more dough than everyone else in the country to even consider buying a house in Toronto — even with a tax-free RRSP withdrawal of $35,000.