Imagine if, by some stroke of miraculous luck, you could live in Toronto, for free, and save all of the money you'd otherwise spend on rent for a future down payment.

With the average one-bedroom condo unit now renting for $2,262 a month, you'd have nearly $20,000 within just nine months — enough to secure an average condo in the westernmost edge of Scarborough.

Have your sights set on buying a pad in Yorkville or The Annex? You'd need to save the same amount of money for a whopping 74 months (just over six years), according to Zoocasa.

New data from the real estate brokerage and analysis firm suggests that high rent prices in Toronto are making it hard, if not impossible, for young people to buy.

"Stubbornly low vacancy rates – just 1.1% for all rentals in the city, and a scant 0.7% for condo apartment rentals specifically – have put upward pressure on average rents as tenant demand steadily grows," reads a report released by Zoocasa on Thursday.

"In some neighbourhoods, where rent is particularly expensive, the findings underscore how rental costs may pose as a hurdle to potential home ownership." 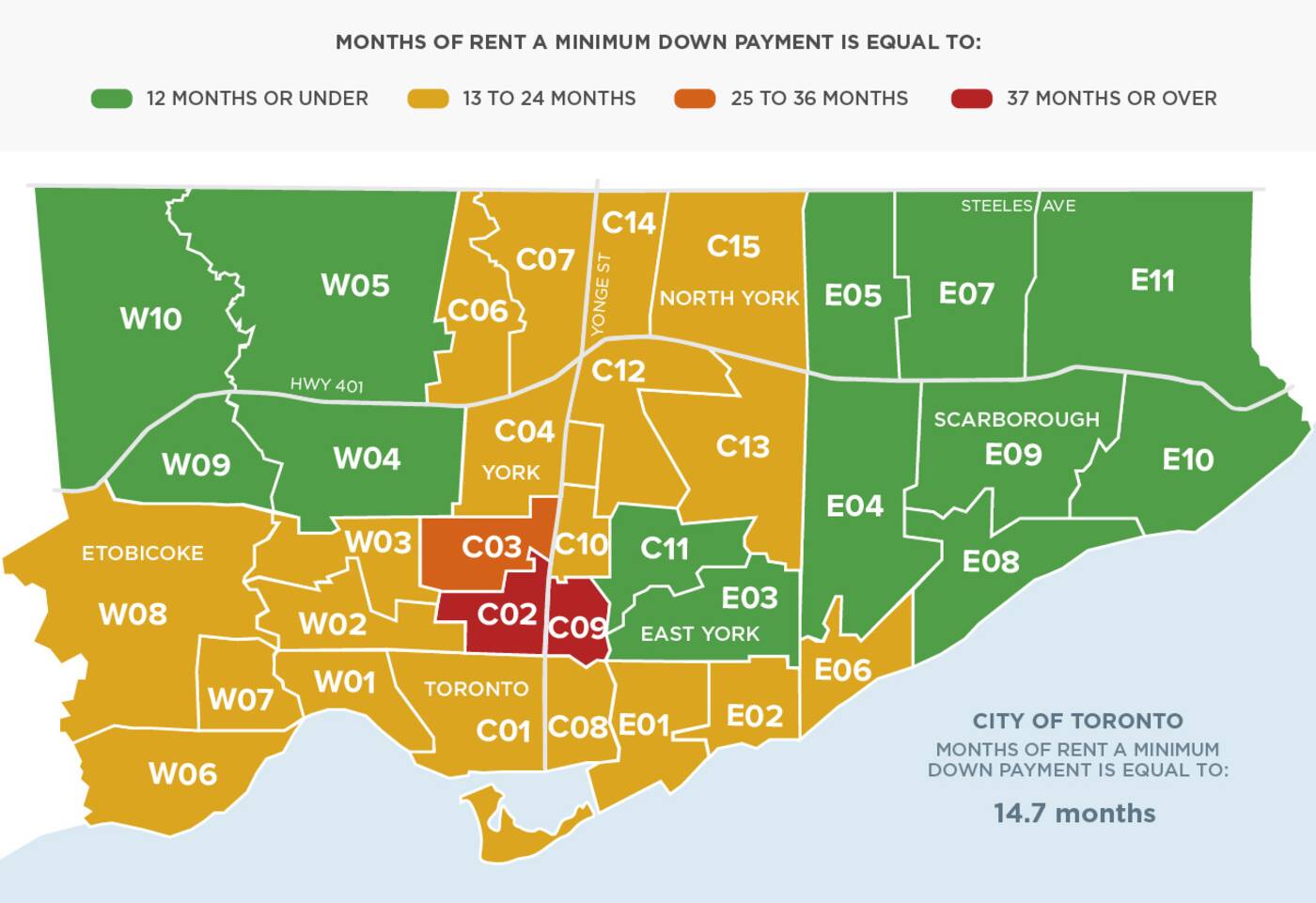 Zoocasa analyzed figures from the Toronto Real Estate Board to determine how many months of saving rent it would take to afford a down payment in the city by neighbourhood. Image via Zoocasa.

To demonstrate this, the firm compared average condo apartment lease rates with average condo sold prices across the City of Toronto's 35 neighbourhoods.

Analysts then calculated "the minimum down payment required to purchase the average condo unit in each neighbourhood, as well as the number of months of rent that would be equivalent to the down payment amount."

The number of months needed to save up for a down payment varies widely from neighbourhood to neighbourhood, however.

There are 13 different parts of the city where one could theoretically save up for a condo down payment within just a year, if they were able to stop paying rent completely during that time.

Saving for a Condo Down Payment in Toronto? Here’s How Long It Would Take If You Didn’t Need to Pay Rent https://t.co/xCzMXhLP3S via @zoocasa

"These most affordable pockets are largely located in both the eastern and western edges of the city and away from the core," notes Zoocasa, "including neighbourhoods such as West Hill, Centennial Scarborough, Malvern, Rouge, Black Creek, and Rexdale."

For a place downtown in a neighbourhood like City Place, Liberty Village or the entertainment district, you could save up enough for a down payment on an average condo in just over 17 months.

Again, that's only if you save everything you're spending on rent right now in lieu of... what? Living on the street? Living with your parents?

Some 47.4 per cent of young adults aged 20 to 34 in Toronto have chosen the latter option, according to Statistics Canada, and it's not hard to see why when the numbers are presented in such a context.

Think about that the next time you razz your buddy for squatting in his mom's basement at 30.

Is it lame? Probably, but it's one of the smartest things those with the option to live with their folks can do.