We've all heard tell of people whose grandparents bought their $2 million Rosedale homes for less than $100K back in the 60's. Such things are hard to hear for millennial renters, but understandable. It's been a long time.

What's harder to comprehend is how condo values could increase by more than 100 per cent in just half a decade — and yet, in some parts of Toronto, that's exactly what happened between 2014 and 2019.

A new report from the real estate listing service Zoocasa reveals that eight out of the 35 MLS districts in Toronto have seen condo prices literally double over the past five years. These areas are as follows:

Also, thirty out of those same 35 districts have seen condo prices jump by at least 50 per cent.

"The Toronto housing market has seen a world of change in recent years," reads the staggering report, released on Thursday morning.

"Factors such as a strong economy, heavy migration, low rental vacancy, as well as investment in real estate as an asset, have had a too-hot-to-handle impact on average home prices in the city." 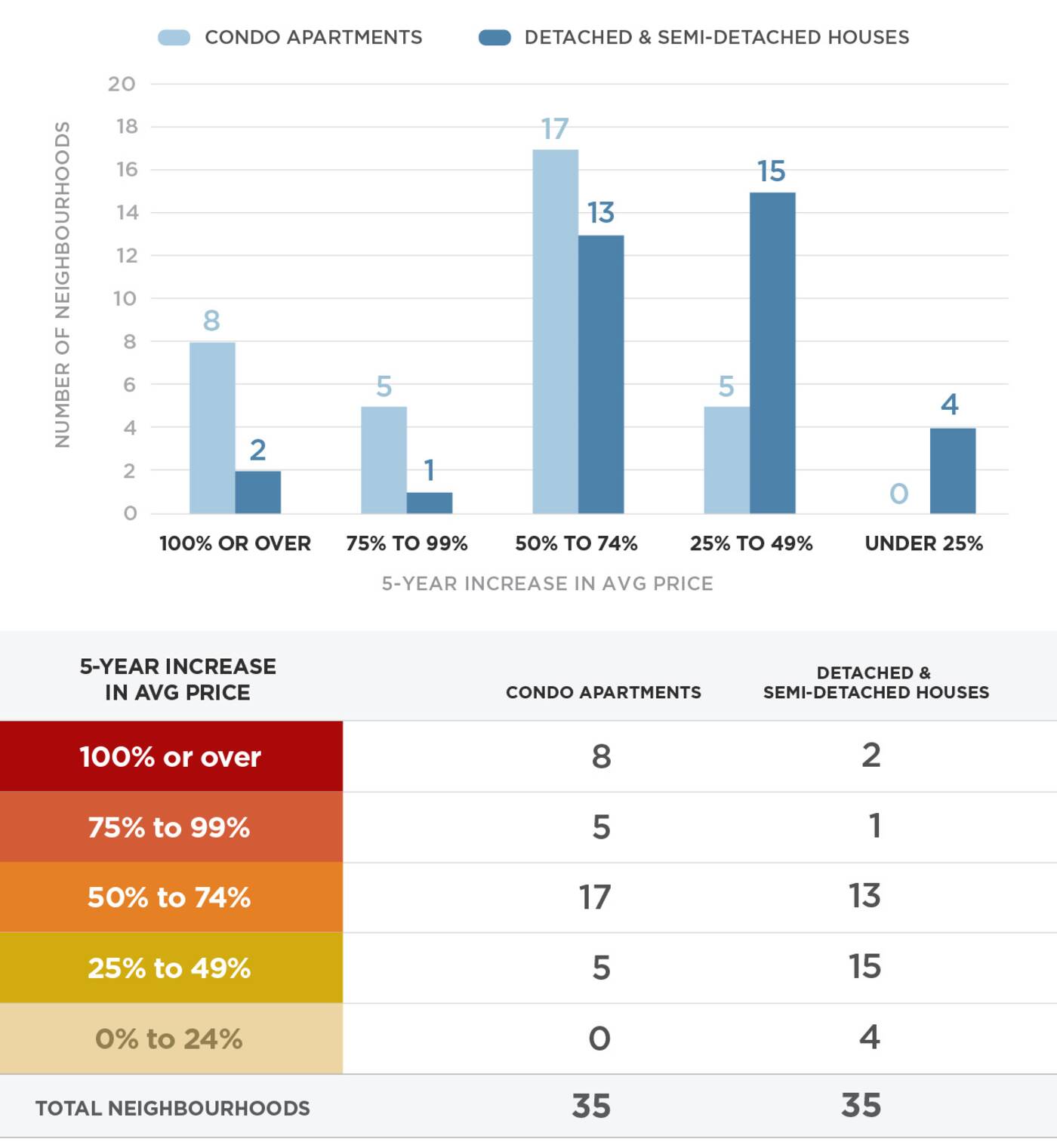 How City of Toronto home prices have increased between July 2014 and July 2019, based on Toronto Real Estate Board data as analyzed by Zoocasa. Image via Zoocasa.

It would cost the average buyer across all home types (houses and condos combined) roughly $256,055 more for a home in July of 2019 than it would have in July of 2014, according to Zoocasa, representing an across-the-board increase of 46% with a current price tag of $806,755.

"Provincial and federal policies introduced to cool the market have had a pulldown effect on sales and price growth between late 2017 – mid 2018," explains Zoocasa Managing Editor Penelope Graham in the report.

And yet, "Over a five-year time period, dramatic price increases have persisted in pockets across the city."

As mentioned, these price increases have been sharpest on the condo market, particularly in "areas with prices lower than the city average," such as Scarborough and Malvern, and in areas where sales volumes were "significantly lower" than what we've observed in the downtown core.

Below is a graphic showing how condo prices have appreciated around the City of Toronto between 2014 and 2019.

Here is the corresponding graphic showing how house prices have appreciated around the City of Toronto during the same period.