Toronto wants to build a new neighbourhood around Yorkdale Mall

Yorkdale Shopping Centre is one of Ontario's most beautiful and bountiful malls, but the roadways surrounding it are a mess.

Bordered by Dufferin Street to the west, Highway 401 to the north and Allen Road to the east, the area is perpetually rammed with traffic but almost impossible to get around by anything but a car.

The City of Toronto hopes to change this with a master-planned residential and retail neighbourhood... in 20-25 years. But first, they need a plan.

An architectural rendering imagines what a complete neighbourhood built around Yorkdale Mall could look like one day. Image via City of Toronto.

A development plan to amend zoning by-laws for a "long-term, mixed-use plan for the entire Yorkdale Shopping Centre site" was recently publicized on the city's website after years of consultations with developers and other stakeholders.

This Yorkdale Shopping Centre Block Master Plan project will be impemented in phases, if all goes as planned, culiminating in the creation of a mega development on the 30 hectare site that now contains the mall, one adjacent office building and a GO bus terminal.

Three different development options are currently up for consideration on the city's website, all of them containing an internal private street network.

Option one (shown below) would add an additional 320,338 square metres of gross floor area to the existing Yorkdale complex, the majority of it residential. A total of 1,496 units would be built under this option as well as a 240-unit hotel. 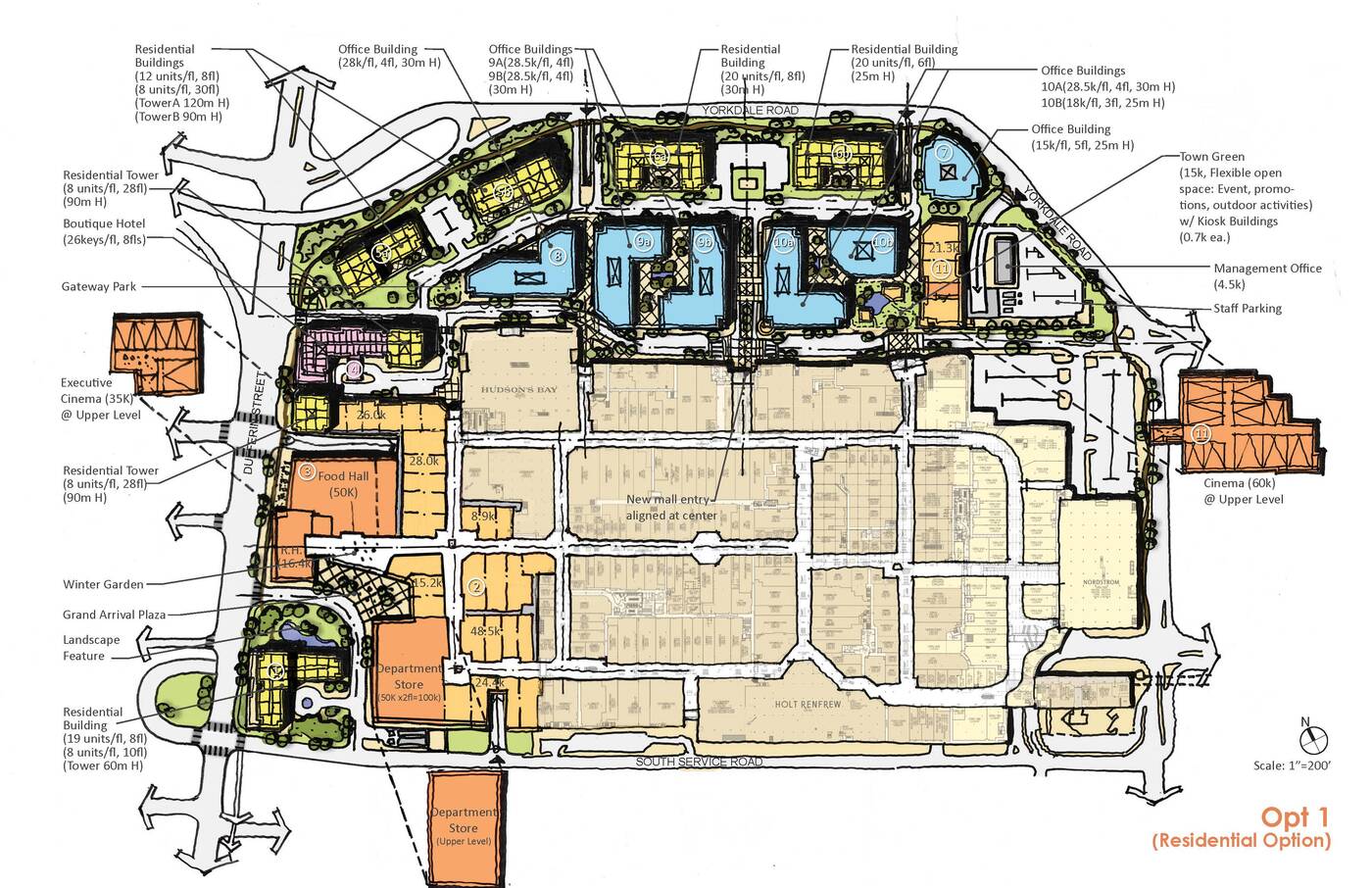 Option 2 would see significantly more office space added to the area—197,004 square metres of it in total. A 208-unit hotel and 738-unit residential building would also be built using this plan. 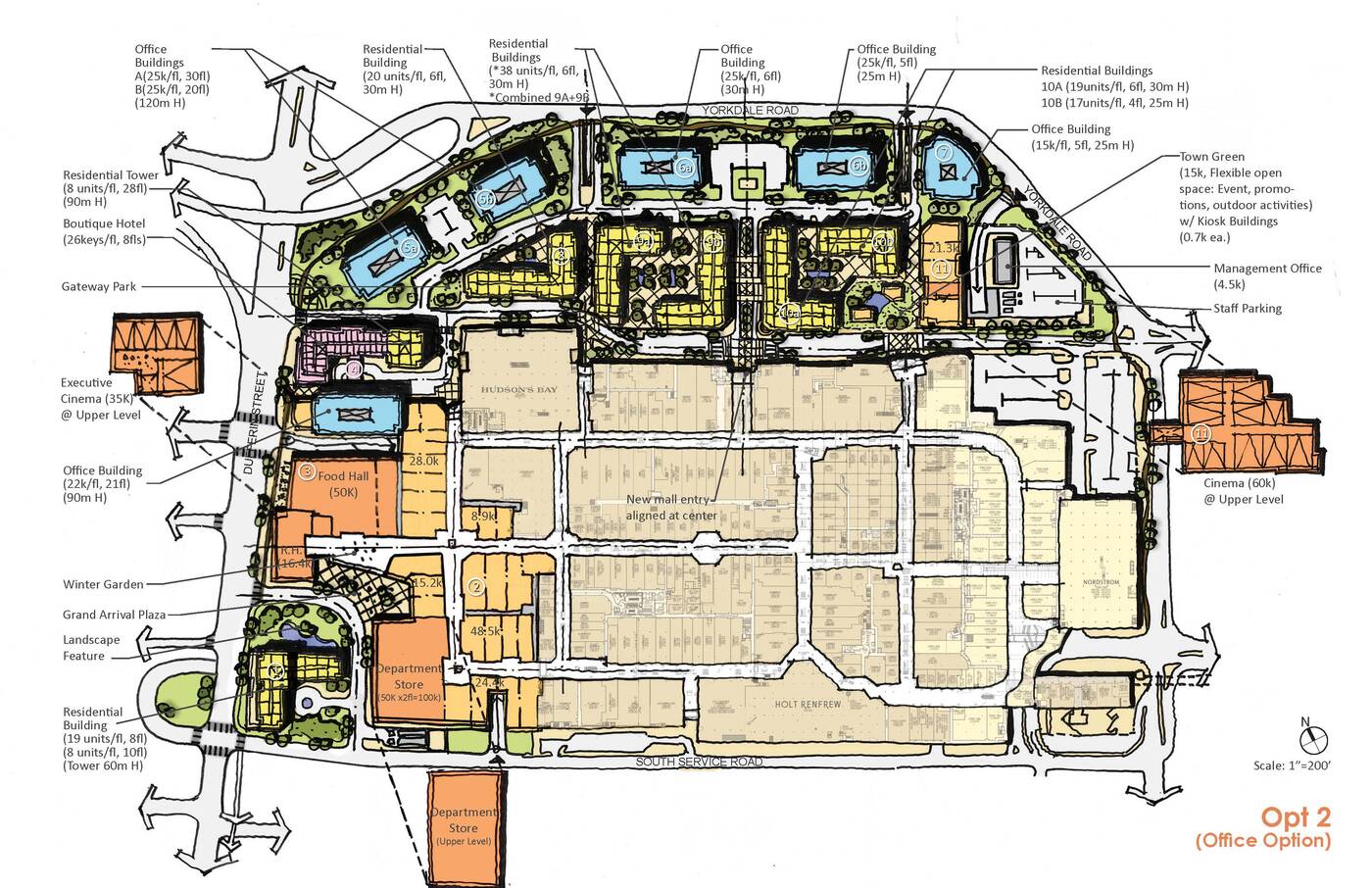 Development option 3 would similarly be heavy on office space but expand further into the mall's northern parking lot, making enough space for 962 residential units across roughly a dozen designated buildings. 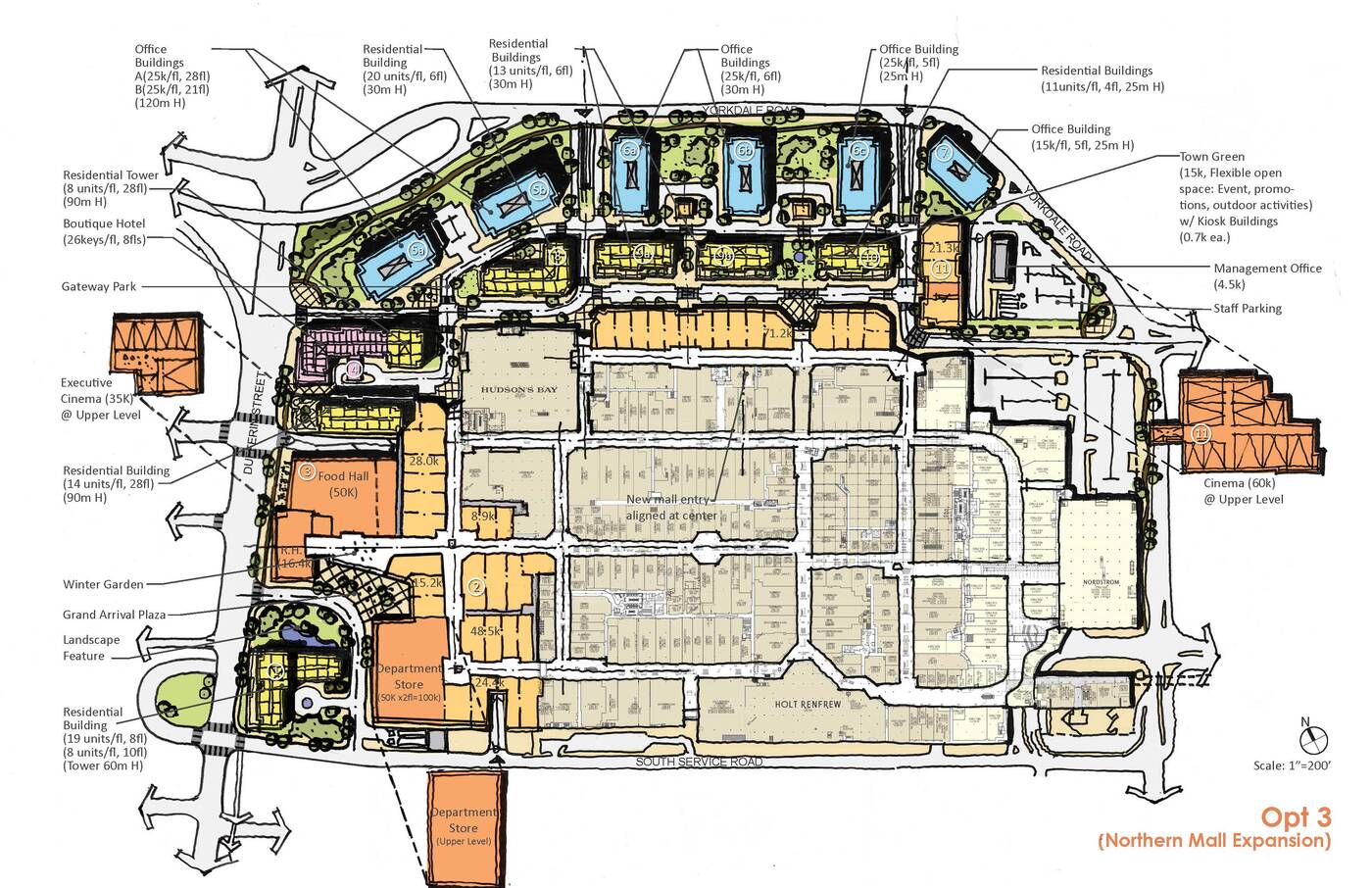 All three plans include space for a massive new food hall, multiple cinemas, mangement offices, parks, event space and a sprawling "town green" outdoor recreation centre, among other features. The majority of parking spots would be moved underground.

"Yorkdale's Block Plan will establish major entrances and exits to the property, main servicing, general heights, open spaces, setbacks and a network of circulation routes for the entirety of the Site," reads an official description of the project.

"The Block Plan forms the basis of the proposed amendments to the Dufferin Street Secondary Plan and Zoning By-law. Further elements of the Secondary Plan, including internal street design, are established in the Urban Design Guidelines."

Developers eventually hope to turn Yorkdale Shopping Centre into the heart of a bustling residential community. Image via City of Toronto.

Some in the area are already concerned about how the plan could further heighten traffic problems, but it's important to note that we're still decades away from seeing the Yorkdale mini-hood rise.

City planners also hope to implement design solutions that make access to and from the site easier as part of the redevelopment.

You can read more about the entire project here, if you're keen, and submit your own feedback to the City of Toronto. Formal public meetings are forthcoming, according to both the city and Yorkdale.