The cost of housing concerns more young Torontonians today than any other issue facing the city, surpassing crime, the economy and even public transit as their greatest source of stress.

A recent Angus Reid survey, the results of which were published on Monday, found that 61 per cent of Toronto residents under 35 are frustrated with how long it takes them to get to work, but can't afford to live any closer.

And we're not talking about home owners here. The dream of buying something in Toronto has long sailed for roughly 74 per cent of non-owners surveyed who say that residential real estate is "unreasonably costly" across the region.

In fact, more than half of GTA renters — 59 per cent — are "seriously considering" leaving the Toronto area because of too-high housing costs, according to the Angus Reid Institute, and the situation is only getting worse. 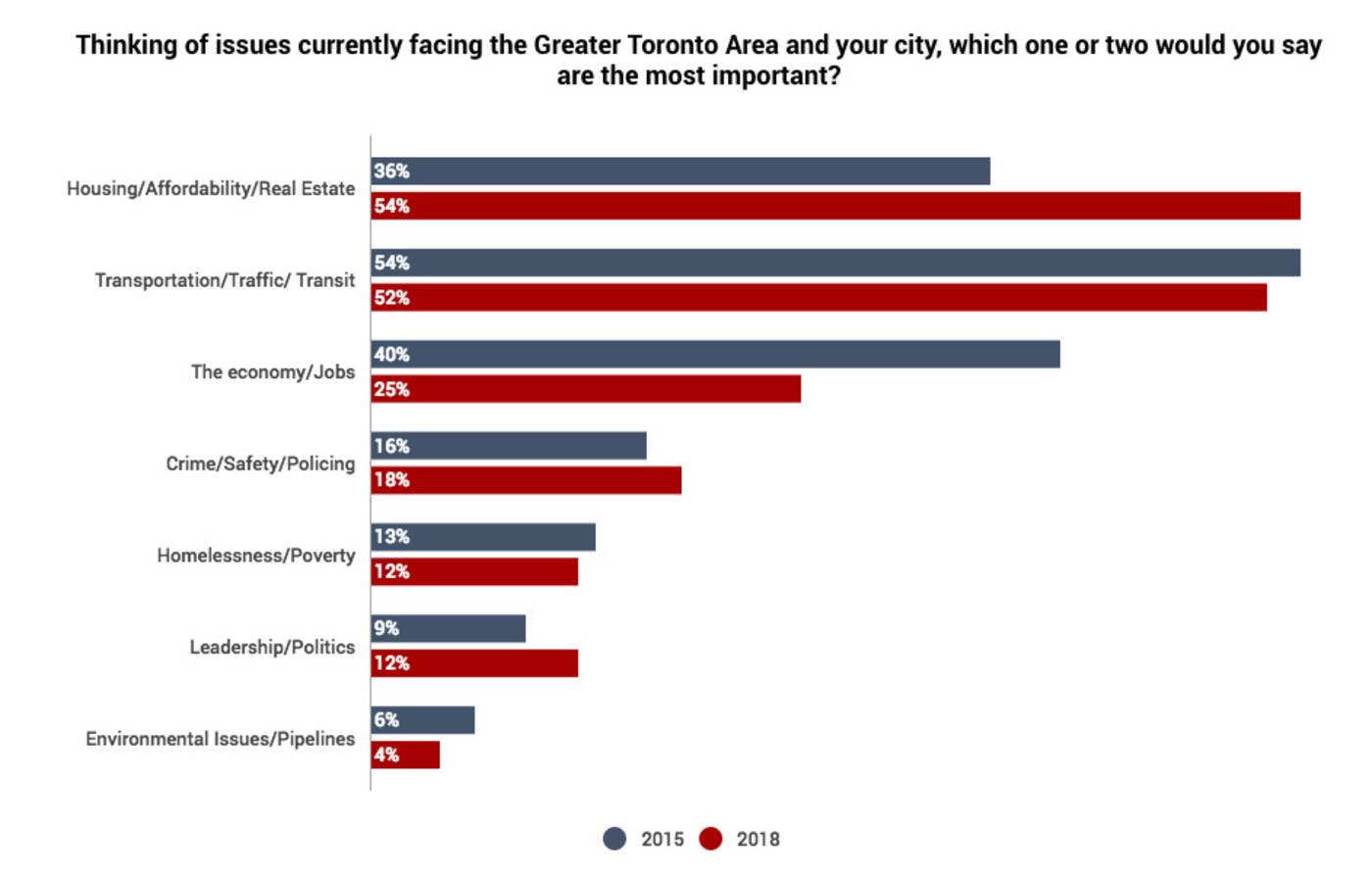 Affordable housing has overtaken transportation and traffic in terms of what Toronto residents feel are the most important issues facing our city today. Image via Angus Reid Institute.

"In 2015, when the Angus Reid Institute conducted its first survey on housing and transportation issues in the Greater Toronto Area, residents expressed much more concern about the latter than the former," reads a report on the non-profit research foundation's survey findings.

"Today, when asked to name the top issues facing the GTA and their specific municipality within it, respondents still list transportation and transit issues among their top concerns, but the number naming housing affordability has surged."

Like it did in 2015, Angus Reid classified all 831 survey respondents into one of four groups based on how they answered questions about housing and transportation-related pain. 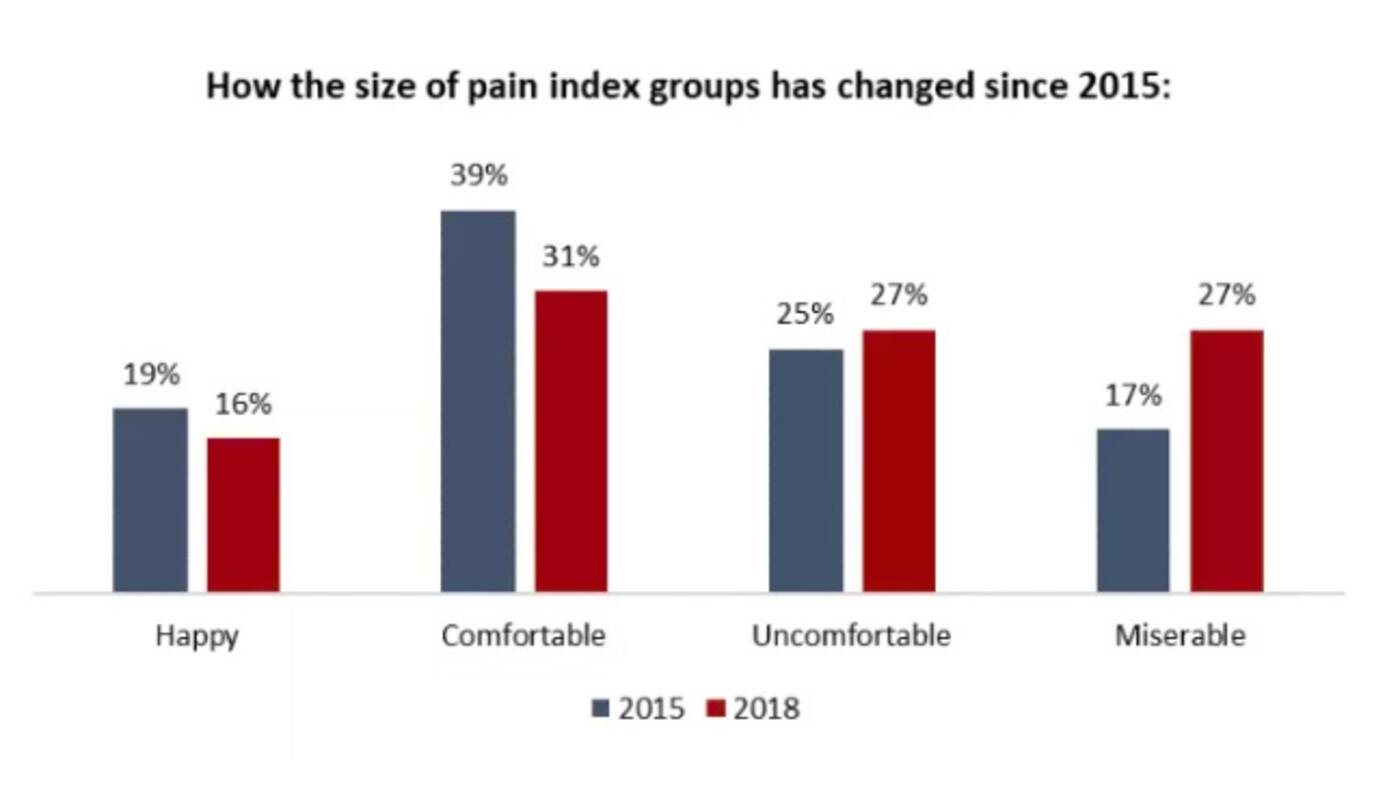 The number of people in Toronto who are considered miserable about housing and transportation has risen 10 percentage points over the past three years. Image via Angus Reid Institute.

"The Happy tend to be much older than the general population (73% are ages 55 and older)," explains the Institute. "Most of them do not commute, and so experience relatively little transportation-related pain."

The Miserable, on the other hand, is mostly made up of renters who rely on public transit and are under the age of 35.

"They also tend to be more ethnically diverse than the other groups," notes Angus Reid. "Especially the Happy and the Comfortable, which skew heavily Caucasian."

It makes sense that so many young people are thinking about leaving Toronto, given the sky-high rent prices and lack of adequate transportation, but the trend is also being driven by a lack of hope about the situation getting any better. 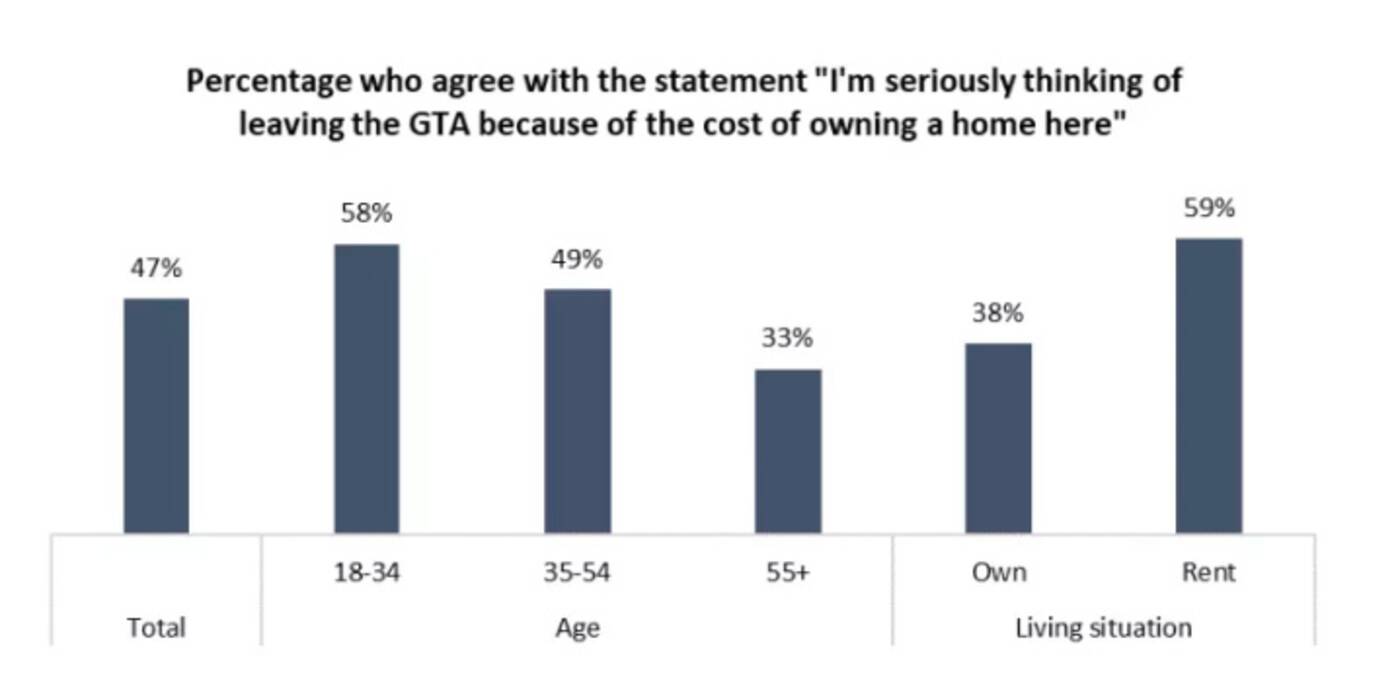 Home ownership is less and less of an actual possibility for GTA residents, especially those under 35. Image via Angus Reid Institute.

A full 84 per cent of all residents surveyed said that they are "worried the next generation won't be able to afford to own a home" in the GTA.

"Younger residents and renters — two groups that overlap significantly — are especially inclined to espouse this view," reads the study.

Many different potential measures that governments could take to further cool the market are floated in the Angus Reid study, all of them with varying amount of support from respondents.

On the whole, however, most people (62 per cent) agree that "no matter what the government does, it won’t be able to make housing here affordable."