After years of "will they or won't they?" buzz, developers are finally moving forward with plans to redevelop an outwardly-beautiful 19th century hotel on Toronto's west side.

The Palace Arms, built in 1890, has long-served as a rooming house for men at King Street and Strachan Avenue.

It was put up for sale in 2014 and real estate nerds have been waiting to find out what would become of the derelict Romanesque Revival building ever since.

Will it become a boutique hotel like The Drake, Gladstone and Broadview before it? Or maybe a purpose-built residential tower like the Waverly is set to become?

With unique architecture and a prime location near the heart of King West and Liberty Village, the Palace Arms is just full of potential. 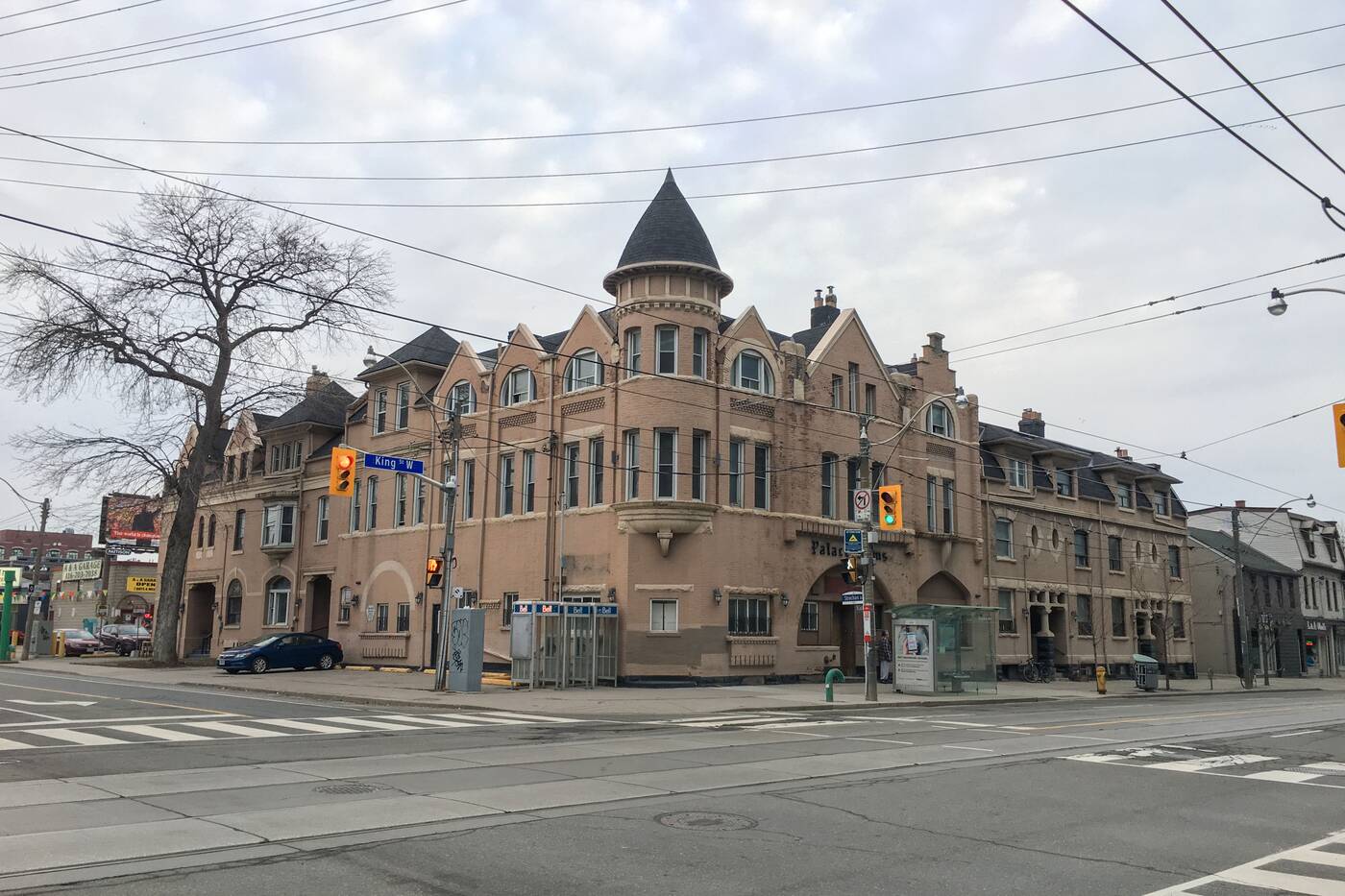 The Palace Arms hotel as it appears in 2018. Photo by Lauren O'Neil.

Nothing is for certain yet, but a development application submitted last Friday shows that work is finally under way and, as predicted, that involves working the existing heritage building at 950 King Street West into a condo complex.

The structure of the tower will be unusual — based on early design plans submitted by Intentional Capital — and big, with 14 stories of residential space sitting atop a two-storey podium.

Cantilevered in the middle and pulled back at every corner, the front of the tower looks almost like a giant sail atop the rooming house. If the Palace Arms were a ship, and that ship were moving forward, it would be headed straight for Lake Ontario. 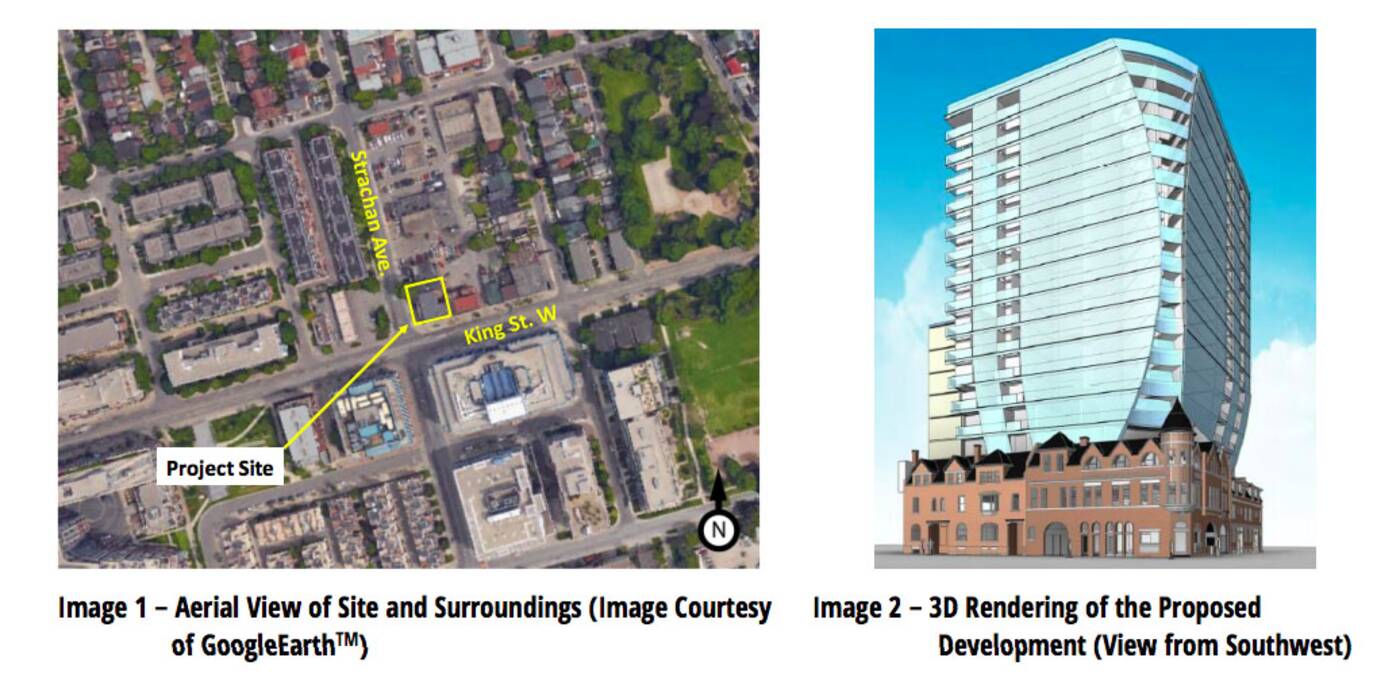 Design renderings for the most recently proposed Palace Arms redevelopment via Intentional Capital / City of Toronto.

Inside, a total of 14,334 square metres of residential space will be divided into 217 condo units which include 46 studios, 120 one-bedrooms, 30 two-bedrooms and 21 three-bedroom units. Retail uses have been proposed at ground level.

The building, as it's designed now, will boast plenty of indoor and outdoor amenity space for residents, including a 2,945 square-metre rooftop. The plan includes a total of 74 parking spaces for cars and 223 for bicycles.

It also includes 28 rental studio units on the second floor of the base building to replace some of the 89 dwelling rooms that currently exist within the Palace Arms. 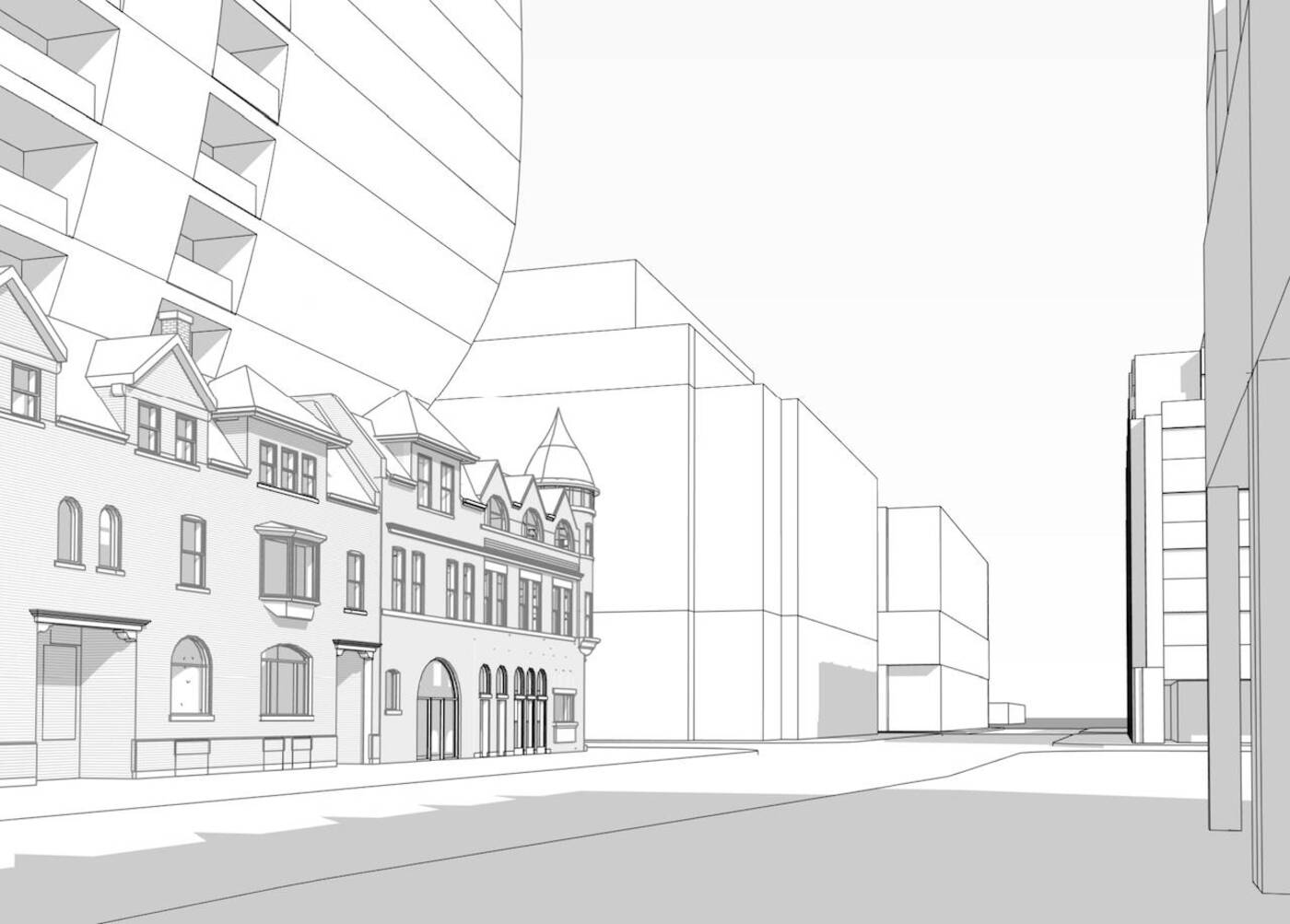 Detail still lacks, but we're finally starting to see what the historic Palace Arms rooming house could become now that it has been purchased. Image Intentional Capital / City of Toronto.

"While affordable to those of limited means, the dwelling rooms within the existing building do not provide a high-quality living environment," reads a planning and urban design rationale document submitted with the application.

"Replacement of dwelling rooms with new dwelling rooms within a new condominium building would not result in a good living environment," it explains, "as rooming houses require management with specialized experience in housing marginalized populations."

Instead, the developers are positioning these smaller, more affordable rental suites as "efficiency suite condominium units."