Another Ontario festival has ended with countless disgruntled ticket holders. What was supposed to be an evening of light and love ended up with allegations of a scam.

The Lights Festival held on Saturday, Aug. 20 (just an hour away from Toronto) promised attendees a magical evening with the release of hundreds of paper lanterns, but some ticket holders are alleging they trekked all the way to Ohsweken just to be turned away by local police.

According to one person who reached out to blogTO, their fiancee and thousands of other people bought tickets for the show and attended the venue only to find it cancelled.

"We were lining up at the event in our car, and police officers were turning everyone away as the event was 'cancelled.' Then people were reporting seeing lights. Turns out a select few were still part of the event," read their email.

Head to The Lights Festival Instagram page and you'll see multiple commenters asking for their money back or complaining about the lack of notice.

"It takes just one email to not piss off 11k people. Any communication would be great," read one comment.

"Drove from 2 hours with 2 small kids just to find out it's canceled," read another.

But did the organizer oversell tickets? Did they secure a permit to host the event? Was the festival downright cancelled? According to a statement sent from the festival to blogTO, the answer to all of those questions is no.

When I asked the organizers what exactly happened, they forwarded an already published statement titled “Toronto Event Announcement.” 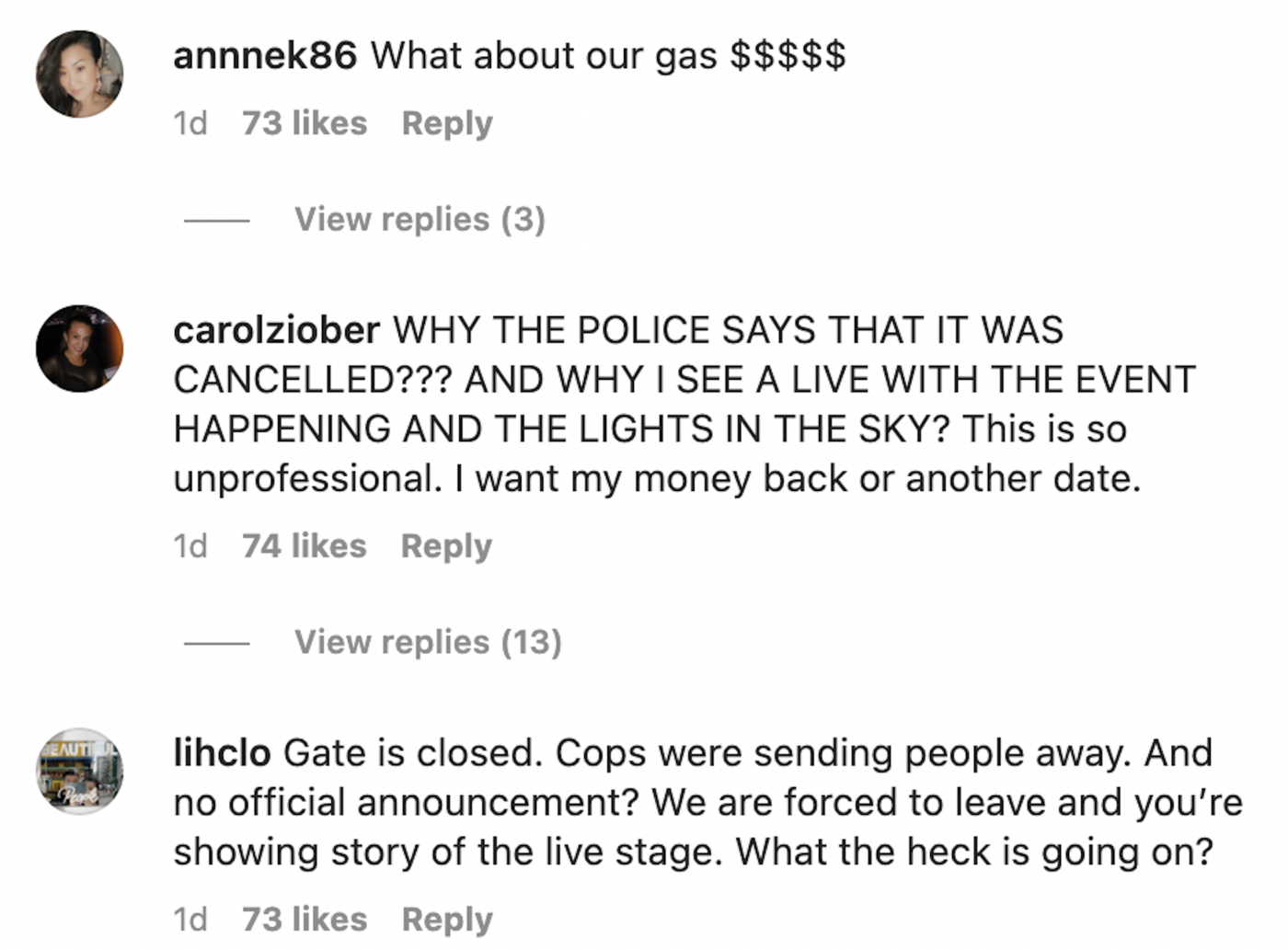 "First off, we want to apologize for any confusion and inconvenience you may have encountered at last night’s Toronto Lights Festival. Our event is one of unity and and love and its disheartening when things get in the way of our purpose," read the beginning.

It goes on to say that organizers were "fully anticipating" a great experience and "followed all necessary procedures and had the proper permits."

"The event was not even close to being oversold. Everyone was enjoying the entertainment as we waited for nightfall and the later launch. We were understandably shocked to learn that at some point towards the end, police had shown up and were turning people away." 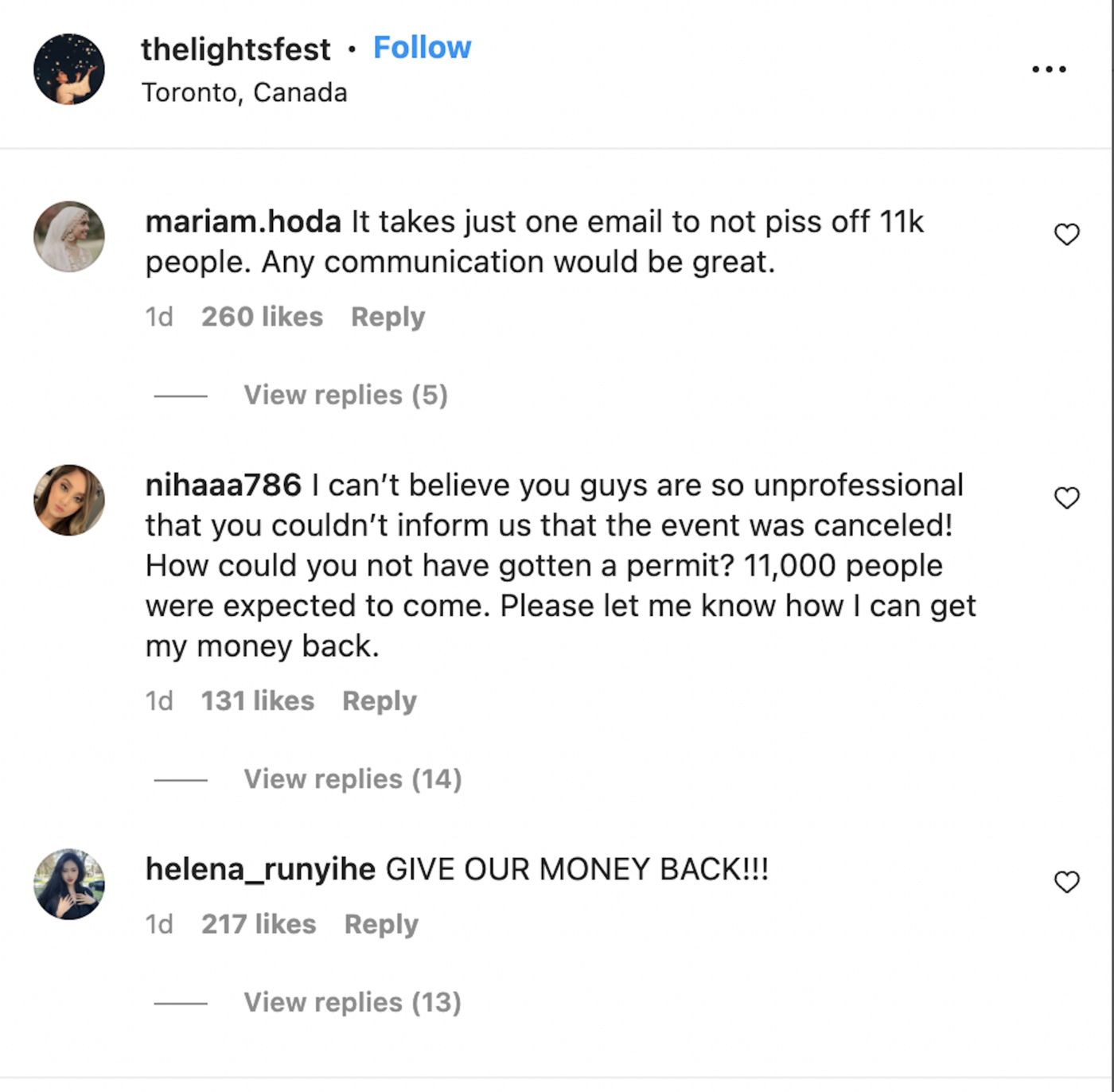 The Lights Festival Instagram page was flooded with angry comments.

Organizers claim police would not let them speak to "stranded participants" and were not "forthcoming with any information to help us understand why they were trying to shut us down," read the statement.

They go on to allege police forced them to conceal the entire event before the lantern launch.

"We will make this right. We have already started the search for a new location that will properly host The Lights."

The statement ended with multiple apologies to ticket holders and promises of a new event.

Organizers did not respond to any other questions from blogTO, including if people who couldn’t enter the venue would receive compensation.

It seems that this statement has done little to quell the anger from customers.

An Instagram page titled The Scam Lights Fest has been showcasing the festival's fiasco and angry comments.

With 48 hours passing since the festival's disappointing ending, it is unknown what will come next.

10 free things to do in Toronto this fall

25 things to do in Toronto this Thanksgiving weekend 2022