Weekend events in Toronto is our guide to events happening this Friday, Saturday and Sunday. Here's what's happening in Toronto this March 1-3, 2013.

The Strumbellas
Fresh off a Juno nomination for Roots and Traditional Album of the Year by a Group, The Strumbellas play a Friday night set at Caplansky's. The six-piece roots and indie rock band from across Ontario released their first full-length album last year, My Father and The Hunter, which garnered them their nomination and breakthrough on the Toronto indie circuit. This show comes along with Caplansky's launch of an in-deli series that sees the space transform into a music venue after hours. That, and The Strumbellas keep it real like that. Tickets will be available at the door.
Caplansky's Deli (356 College Street), March 1, 2013, 10PM $10

Synesthesia II
A technology-themed concert, Synesthesia II will feature the works of nine composers who incorporate electronics into their music, each in different ways. This interdisciplinary music showcase will feature the work of composers Michael Vincent, Monica Pearce and Patrick Power as performed by eight musicians. Each performance will feature a light installation component by visual artist Dylin North. The event is pay-what-you-can, with a reception to follow.
Cinecycle (401 Richmond Street), March 2, 2013, 9PM PWYC

Pretty Pretty Records' Anniversary Show
Pretty Pretty Records began four years ago with good intentions of getting people to dance. Having evolved into its own record label, PPR celebrates the one year anniversary of the release of its inaugural album Kontravoid's S/T, a full-length work that solidified PPR as a record label. Ringing in the beginning of year two with a party at The Comfort Zone this Saturday night, Kontravoid will perform along with out-of-towners Dream Affair, Automelodi and Tiers. Everyone is welcome so long as you pay the toll. Check out our interview with one of Pretty Pretty Records' founders.
The Comfort Zone (480 Spadina Avenue), March 2, 2013, 9PM $10

For more music listings, check out our This Week in Music and March concerts posts.

22nd Annual Toronto Vintage Clothing and Textile Show & Sale
Celebrating its 22nd year, the Toronto Vintage Clothing and Textile Show is one of the largest sales of vintage clothing, accessories, heritage estate jewelry and textiles in the country. Having moved to a bigger location at the Ontario Science Centre, this year's show will feature a wider range of items and a list of dozens of vendors with items like quilts, lace and linens for sale. If you're a picker, skip the garage sales this Sunday morning and head here instead. Partial proceeds from admission will go to the Canadian Cancer Society.
Ontario Science Centre (770 Don Mills Road), March 3, 2013, 10AM $8

Bent
In 1930s Berlin, a gay man finds himself in Dachau Concentration Camp after a one-night stand. The lesser-told story of death camps is represented in Bent, where Max is forced to wear the pink triangle, the S.S.'s symbol for homosexuality, and endure punishment for his sexuality. Opening at Hart House Theatre this Friday night, the groundbreaking play by Martin Sherman and directed by Carter West will run until March 9th.
Hart House Theatre (7 Hart House Circle), March 1-3, 2013, 8PM $25 general, $15 student/senior 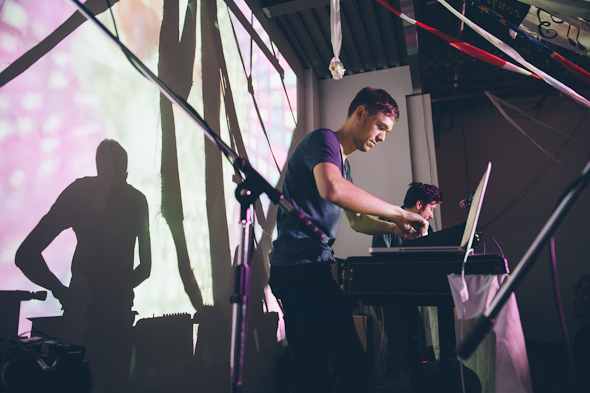 Feast in the East 23
Jiva MacKay takes on a bold new menu at this weekend's monthly food and feasting series Feast in the East. Running for almost 2 years now, this 23rd installment of FitE will feature a gourmet meal prepared by the Chef, along with musical performances by rappers More or Les, Onakabazien, Fresh Flesh and Miles Jones & DJ Serious. Advance tickets are available at Circus Books & Music, The Film Buff, Soundscapes and Grasshopper Records, or at the door. Dinner is included in that price!
Polyhaus (388 Carlaw Avenue), March 1, 2013, 9PM $10 door, $7 advance

Balloons
Balloons symbolize freedom and letting go, which is why the Mari Project has organized an art show surrounding their image in dedication to those suffering from a mental illness. In Balloons, artists have taken on the playful subject matter to display their interpretations of what it means to let go and be free in this Friday night's opening of the show at Playful Grounds. The exhibition runs until March 31st and, of course, you'll be walking away with a balloon.
Playful Grounds (605 College Street), March 1, 2013, 8PM $10

Motown Party
Dance to some of the greatest songs in music history at 751's returning Motown Party, where Fawn BC and DJ Caff will be joined by special guest DJ Misty Rock 'n' Roll this Saturday to play classics by Stevie Wonder, Diana Ross, Jackson 5 and Smokey Robinson. If Motown isn't your thing, an all-vinyl set by Brett Millius and Reverend Throwdown will happen all night in the basement of the lounge, with classic rock and oldies spinning on the turntables. If good music isn't enough to bring you out, pitchers will be $11.
751 Lounge (751 Queen Street West), March 2, 2013, 9PM $5 before 11PM, $10 after 11PM

Super Good with DJ Techtwelve
We told you about Crawford's generous offering of free grilled cheese sandwiches on the dancefloor on the first Saturday of the month, and if you were sad to have missed it (which of course you were), this Saturday is your chance to join in on a night of dancing and gooey grilled cheese on the main floor, and music courtesy of Juno-nominated DJ Techtwelve in the upstairs area.
Crawford (718 College St.), March 2, 2013, doors at 10PM, free before 11PM ($5 after)

Made IN Toronto Film Festival
"Sacred Economics" author Charles Eisenstein and filmmaker Velcrow Ripper engage the city in talks at the MINT Film Festival. Celebrating film and music that is Made IN Toronto, MINT will feature three days of screenings, author talks and performances at venues across the city that are intended to show off what Hogtown is made of. Visit their website for the full programming schedule and info on how to buy tickets.
Various locations, March 1-3, 2013, 6:30PM 2-day pass $59 advance, $80 regular, 3-day pass $71 advance, $100 regular

Reefer (Harper) Madness
Reefer Madness screens at Big Picture Cinema, the city's only 420-friendly movie house, this Friday night to create awareness of changes to medical marijuana programs in Canada. With the intent to fight Harper on these changes, this screening will feature guest speakers and media coverage so if you've ever dreamed of being high on the 11 o'clock news, now is your chance. Toronto band Mystic Fools will play before the speeches and screening. If you believe in the medical marijuana cause, join in on the fight.
Big Picture Cinema (1035 Gerrard Street East), March 3, 2013, 9PM $10 advance, $12 general

Longform Sundays
ImprovTogether, a non-profit improv organization, returns to the stand-up stage with the continuing series Longform Sundays. Taking place at Black Swan Comedy on the Danforth this Sunday, host Justine Cargo will pit four improv teams against one another with the hope of making audiences laugh. The show will be uncensored and (hopefully) vulgar with all proceeds supporting the organization's continuation.
Black Swan Comedy (154 Danforth Avenue, 2nd Floor), March 3, 2013, 7PM PWYC

Uniiverse Games Weekend: Ping Pong Tournament
Uniiverse is hosting gaming tournaments all weekend long but we think their ping-pong tournament is something worth heading east for on a Friday night. 24 single players are needed to compete in a ping-pong tournament that will feature a pretty big prize at the end--an iPad Mini. Anyone can sign up to play and there will be music, free drinks and snacks provided. If ping-pong doesn't suit you, there are plenty other gaming events happening, like this Settlers of Catan tournament on Saturday night.
Uniiverse HQ (111 Jarvis Street), March 1, 2013, 7PM $20