One Of A Kind Show
Now in its 38th year, the One Of A Kind Show returns for its semi-annual display of unique crafts by local artisans at the Direct Energy Centre. The largest consumer craft show in North America features late night shopping, an Etsy sellers section, the OOAK Hall of Fame and hundreds of exhibitors of popular and upcoming brands selling everything from clothing to housewares and accessories to trinkets. The One Of A Kind Show runs until Sunday evening with tickets available through the official website and at the doors.
Direct Energy Centre, Exhibition Place (100 Princes' Boulevard), March 27-31, 2013, 10AM $7-$12

Waka Flocka Flame
Southern rapper Waka Flocka Flame has three albums under his belt so he's more than deserving of the Canadian tour is he is embarking on this Saturday night. Waka Flocka is joined by the Comeback Season Kids--a collective consisting of 11 Toronto DJs--at the Phoenix for one of the weekend's biggest shows. Tickets are still available at Soundscapes, Rockpile Venue and Play De Record. Buy now or risk being the person at home liking Instagram photos of the show later.
The Phoenix (410 Sherbourne Street), March 30, 2013, 8PM $45

FOUNDRY 2013 // Andres + Bruce Trail + Colin Bergh
Foundry 2013, the month-long showcase series, continues with another show at BLK BOX on Friday featuring three sets by international musicians and DJs. Headliner Andres is joined by Bruce Trail and the evening's curator Colin Bergh, who will each be spinning DJ sets at the event, which is sponsored by Sapporo beer. Tickets are available at Soundscapes, Play De Record and Rotate This.
BLK BOX (1087 Queen Street West), March 29, 2013, 10PM $17

#ParlourParty TO
Want to party for a cause? #ParlourParty is a night of drinks, dancing and music to raise funds for a young Toronto woman with a brain tumour. This no cover party featuring music by leading and up and coming Toronto techno and tech-house DJs Pasha, Jeff Button & R+D takes place Friday night at Parlour. Get on the guest list by going to partypeopleto.com.
Parlour (270 Adelaide Street West), March 29, 2013, Free

HALFWITS Clothing Co. 2nd Annual Family Reunion
HALFWITS is a clothing line that keeps it in the family. Celebrating their second year designing, the good folks behind the line invite their kin (the good people of Toronto) out for celebratory drinks and a look at their new babies--the threads of the upcoming Spring/Summer line--this Friday night at Sneak's. Beers are $3 until midnight and music will be provided by Exeter and Mike Din. Forego critical comments about your clothing from your parents and join this fam for an Easter fashion party instead.
Sneaky Dee's (431 College Street), March 29, 2013, Free

Cymatics
Artist and photographer Turner Wigginton uses the fundamentals of sound and photography to create sound vibrations and explore their effects on liquid in his upcoming exhibit Cymatics. Opening this Friday night at Lomography Gallery Store, this show is dedicated to visualized sound and the shadows created by light-sensitive chemicals. Wigginton will speak at 6PM with an opening reception to follow at 7. Wigginton, a Ryerson photography student, exhibits at Lomography as the winner of the Win Your Dream Space contest.
Lomography Gallery Store (536 Queen Street West), March 29, 2013, 6PM Free

And Slowly Beauty...
Michel Nadeau's French-Canadian play And Slowly Beauty..., adapted for English audiences by Maureen Labonté, has its final run at the Tarragon this weekend, allowing one last chance to see this critically-acclaimed performance. Portraying the story of Mr. Mann, a gentleman who has won tickets in an office draw to see Anton Chekhov's The Three Sisters, And Slowly Beauty... shows how a man's world is enriched and broadened when he ends up at the theatre alone, left to learn to appreciate art. The performance closes Sunday evening with tickets available through Tarragon's box office.
Tarragon Theatre Mainspace (30 Bridgman Avenue), March 29-31, 2013, 8PM $27-$53

3 Greeks
Tim Nasiopoulos, Jon Malanos and Josh Elijah are three Greeks who have been touring Canada with their stand-up routines but will unite to perform as a trio at the Lower Ossington Theatre's stand-up comedy club this Friday night. Nasiopoulos, a former opener for Angelo Tsarouchas and a Sirius XM personality along with Josh Elijah are joined by Montrealer Malanos for a small Canadian tour that includes Friday's show before they part ways again. Greek culture will take a big hit at this show, which may or may not be worth the $15 to you, depending on how Greek you are. Tickets at the door.
The LOT Stand Up Comedy Club (100 Ossington Avenue), March 29, 2013, 10PM $15

Easter Chocolate Tour
Ten Thousand Villages hosts an Easter Chocolate Tour in Trinity Bellwoods Park this Saturday afternoon, with plenty of free chocolate samples and a guided tour detailing the history of chocolate. The group will meet at 709 Queen West and walk to five stores, speaking with chefs and learning about chocolate-making with shop owners. The tour combines the charm of neighbourhood exploration with free chocolate so you really can't go wrong (unless you hate learning about how deliciousness came to be).
Ten Thousand Villages (709 Queen Street West), March 30, 2013, 3:30PM Free

ReelHeART Monthly Film Series
ReelHeART continues to celebrate International Women's Day with an evening of movies by celebrated female filmmakers like Lauren and Marissa Sandler, Patricia van Ryker and Jerri Zbiral. Four films will screen back to back this Friday night at Big Picture Cinema, including child trafficking doc Keeping Them Safe and performance art doc Never Turning Back. Entry to the three features and one short is just $10, payable at the door on the night of.
Big Picture Cinema (1035 Gerrard Street East), March 29, 2013, 7:30PM $10

Mix, Mingle, Blend Art Party
Mix, Mingle, Blend is an art party that gets everyone involved in the creative process. Taking place at The Common Café on Friday night, everyone will be invited to experiment with paints and encouraged to try out new techniques when creating their personal pieces of art during the two-hour workshop lead by a professional painter. Drinks, hors d'oeuvres and conversation will be included and the admission fee includes framing for the personal piece that attendees will be creating to take home at the end of the night. Book your space now at offthewallartparties.com.
The Common Café (1071 College Street), March 29, 2013, 8:30PM $35 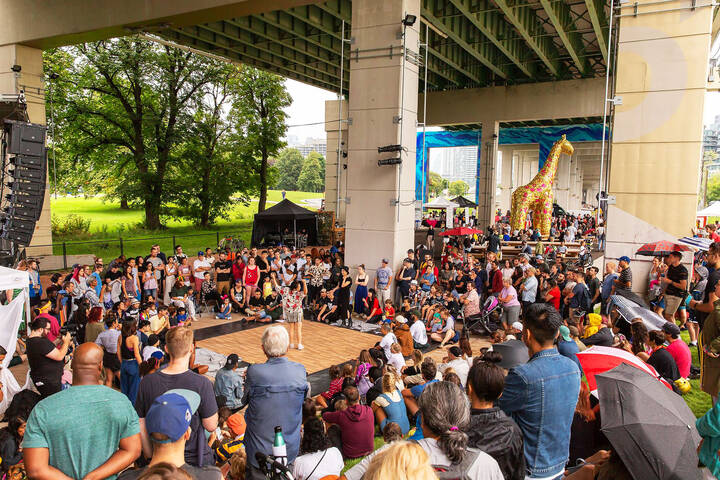