Weekend events in Toronto is our guide to events happening this Friday, Saturday and Sunday. Here's what's happening in Toronto this February 1-3, 2013.

Midnight MRKT
It's the weekend already and to kick off February, 2nd Floor Events is hosting the Midnight MRKT, a new monthly market where music, drinks, fashion, street style food and art make it a late night. Vendors include local designers and craftsfolk from Diptych, The Anchored Social, Carte Blanche Creations, and Nozo Toronto with artists and designers showcasing their work, as well. Neoteric, Lucie Tic and Johnny Hockin will provide music with Toronto's regular round of pop-up food shops providing the fuel. Vendors will accept cash only but the event is free to enter.
2nd Floor Events (416 King Street West), February 1, 2013, 8PM Free

Motown Party
Motown parties are all the rage these days and no one does it quite like the Good Kids. Inviting you over to their place to get drunk and dance to the Motown oldies, with DJs Brett Millius and Reverend Throwdown, Good Kids will fill the air of their Queen West spot with the sounds of Stevie Wonder, Diana Ross & The Supremes, Jackson 5, The Temptations and more this Saturday night, all for the price of $10. There will be videos and prizes to be won, courtesy of Eyesore Cinema. Get in before midnight and pay just $5.
Good Kids (751 Queen Street West), February 2, 2013, 10PM $5 before midnight

Bloor Broadcast: Super Bowl XLVII
If you don't own a TV and don't know anyone who does, Bloor Hot Docs Cinema invites the neighbourhood over to watch Super Bowl XLVII for free on the biggest screen possible. Sponsored by Steam Whistle Brewery, there will be plenty of booze and snacks to make the afternoon a legitimate Super Bowl party but with several non-cash prizes to be won. (Sorry, no betting at this party!) Tickets will be issued on a first-come, first-served basis. Doors open at 5:30PM.
Bloor Hot Docs Cinema (506 Bloor Street West), February 3, 2013, 5:30PM Free

For more places to watch the Super Bowl, check out our round-up of Super Bowl events.

Toronto 2013 Winter Dance Party
The Toronto 2013 Winter Dance Party is the ElMo's biggest and most historically themed party of the year, with performances by Jittery Jack, The Millwinders, and Tennessee Voodoo Coupe playing old rock n' roll and rockabilly tunes. Modeled after the 1959 Winter Dance Party Tour at the Surf Ballroom in Clear Lake, Iowa, also known as the final performances by Buddy Holly, Ritchie Valens and The Big Bopper before their tragic plane crash, this concert seeks to commemorate their final show on "the day the music died." The '50s themed night of music takes place in the El Mocambo historical ballroom with DJ Rockin' Dave Faris and Montreal's DJ Matchbox playing vintage vinyl between sets.
El Mocambo (464 Spadina Avenue), February 2, 2013, 9PM $15

Live Music at Caplansky's Delicatessen
As if Caplansky's Deli could get any more awesome, doors are now open for live music shows on Saturday afternoons! Musician Barry Shainbaum plays a three-hour set on the first Saturday of each month at Caplansky's, performing a variety of hits from the '50s to '90s on his harmonica and guitar to entertain customers in line and eating in the deli. Stop by for a classic hot deli sandwich and rock n' roll classics, beginning this weekend.
Caplansky's Deli (356 College Street), February 2, 2013, 3PM Free

Ontario Independent Music Archive Launch Party
The IMDb of Ontario indie music launches tonight with a party hosted by the National Campus and Community Radio Association (NCRA) and the Music Association of Canada (MAC). It all takes place at The Garrison, where the people behind the OIMA (Ontario Independent Music Archive) repository will gather with a diverse selection of performers, like Simply Saucer, The Highest Order, Jay Douglas and the All-Stars, and Lido Pimienta. Learn and listen to Ontario's indie musicians, and pick up a copy of Liz Worth's book Treat Me Like Dirt: An Oral History of Punk in Toronto and Beyond, 1977-1981 while you're there.
The Garrison (1197 Dundas Street West), February 1, 2013, 9PM PWYC (suggested $5)

For more music listings, check out our Hot Ticket post. 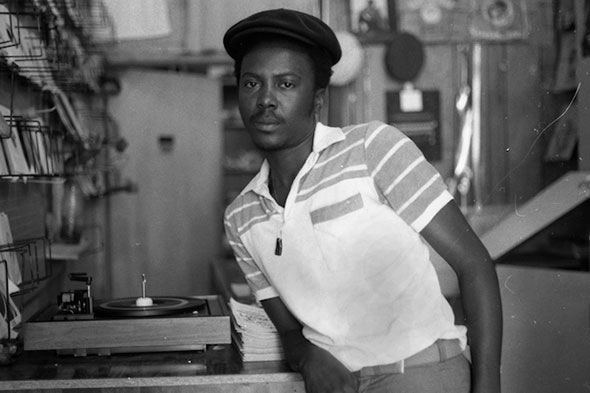 February 2013 exhibitions at XPACE Cultural Centre
Three exhibits each using the objects found in every day life in vastly different ways make up XPACE Cultural Centre's February programming. Opening today, Artists Felix Kalmeson, Zoe Solomon and Melissa Fisher launch The Archivists, an exploration into daily routine through personal collections while Janine Miedzik's Window Space looks into repairs and facades, and how they affect our interactions with architectural space. Rounding out the three new exhibits is Kate Szabo's Project Space, a series of sculptures made from recycled materials that produce sound. All artists and curators will be in attendance at Friday night's launch party and reception in XPACE's new location on Landsdowne.
XPACE Cultural Centre (303 Landsdowne Avenue, Unit 2), February 1, 2013, 7PM Free

Reggae or Not: The Birth of Dancehall Culture in Jamaica
Beth Lesser celebrates the modern reggae tunes and dancehall culture of Jamaican musicians in the '70s and '80s with her first public art exhibition, on this month at the Gladstone. Drop by the opening reception tonight at 7 p.m., then return to the Gladstone's ballroom on Saturday for a night of music and dancing courtesy of DJ Dave Kingston. The exhibit itself runs until February 28, 2013. For more info on the exhibit and related programming, check out the Gladstone's event page.
The Gladstone Hotel (1214 Queen St. West), February 1, 2013, opening reception at 7PM

Feast in the East 22
Polyhaus' popular monthly food and art series Feast in the East returns for the 22nd installment, which will feature more bands, a new art installation and, of course, dinner. FitE's February line-up looks a little something like this: Das Rad, Bruised Knees, John Milner You're So Boss, and John Smith, with Adrienne Crossman displaying her installation Environs. Dinner is included with advance tickets, which are available at Circus Books & Music, The Film Buff, Soundscapes, and Grasshopper Records. Arrive hungry and ready to dance.
Polyhaus (388 Carlaw Avenue), February 2, 2013, 9PM $7 advance, $10 door

Toronto Tea Festival
We have a festival for everything else in this city, so why not have one for tea, too? Toronto Tea Festival is the city's biggest tea party, featuring hundreds of teas from around the world and knowledgeable exhibitors who will school drinkers on everything from processing techniques to where tea flavours originated. A raffle and silent auction will take place at this Saturday's festival opening at the Toronto Reference Library. Tea and books--sounds like the perfect cloudy Saturday.
Toronto Reference Library (789 Yonge Street), February 2, 2013, 10AM $15

Guilty Pleasures
Who says fashion and food can't go together in one dirty little pile? Not The Drake Hotel, where the arts, both sartorial and culinary, combine this weekend for Guilty Pleasures, a Canadian designer fashion market where a 3-course brunch will be served. As well, local designers and jewelry makers will showcase Canadian-made duds while a silent auction plays out, offering an opportunity to "win" some of the wares at heavily discounted prices.
The Drake Hotel (1150 Queen Street West), February 2, 2013, 9AM $38 pp

Shakespeare's Nigga
In Joseph Jomo Pierre's bold, new play, the young playwright exposes Shakespeare by confronting him through two of his greatest characters. Shakespeare's Nigga tells a story of two of Shakespeare's strongest black characters, Othello and Aaron, as they face their creator to question their motivations, their actions, and their fates. Directed by Philip Akin and starring Sascha Cole, David Collins, John Jarvis, Joseph Pierre and Andre Sills, this subversive and challenging play opens Saturday for a three-week run as part of the Black History Month festivities.
Theatre Passe Muraille (16 Ryerson Avenue), February 2, 2013, 7:30PM $15-$35

TD and BAND present Then & Now Black History Month
February 1st marks the beginning of Black History Month, one of the most important cultural celebrations in the city of Toronto, with TD and the Black Artists' Network and Dialogue offering a range of activities, festivals and showcases throughout the month. Beginning tonight with the weekend-long Kuumba festival at Harbourfront Centre, Then & Now's programming includes art events like Beth Lesser's photographic exhibit Reggae or Not: The Birth of Dancehall Culture in Jamaica and Toronto at the Gladstone Hotel (February 1-28), Canadian Film Centre's Q&A event with Boyz N The Hood director John Singleton at TIFF Bell Lightbox (February 12) and the iconic story of Harriet Tubman onstage in The Power of Harriet T! (February 4-22). Check out Black Artists' Network and Dialogue for more details on programming.
Various locations and events across the city

Lead photo from our coverage of Feast in the East 21, second photo from Beth Lesser's exhibit