Weekend events in Toronto is our guide to events happening this Friday, Saturday and Sunday. Here's what's happening in Toronto this September 7-9, 2012.

YLMC: The Kubrick Collection, Vol. 1: THE SHINING
Kubrick fans, pay tribute: Young Lions Music Club presents The Kubrick Collection, an event series that pays homage to the brilliance of the late director. Taking place in Room 237 of The Overlook Hotel, in the southeast back alley at College and Bathurst, the imagery and ambience of The Shining will be summoned forth at this party, which will feature performances by Absolutely Free, and the artwork of Sarah Cannon and Eric Wichman. Costumes are not required, but love for Stephen King and Kubrick is. Tickets at the door.
The Overlook Hotel (southeast alley of College Street and Bathurst Street), September 7, 2012, 10PM $10

Cabbagetown Festival of the Arts
Like Buskerfest with a neighbourhood feel, the Cabbagetown Festival of the Arts brings out musicians, performers, actors and artists for its 36th year. Patios will be open for drinks and there will be plenty of food vendors and performers to entertain you as you stroll through Cabbagetown. Also be sure to check out the Cabbagetown Arts & Crafts Sale in Riverdale Park West (201 Winchester Street) for artisan handicrafts.
Cabbagetown (Parliament Street between Gerrard Street and Wellesley Street), September 8-9, 2012, Saturday beginning at 10AM, Sunday beginning at 11AM Free

Toronto International Film Festival
The 2012 Toronto International Film Festival is now in full swing with premieres and gala screenings taking place throughout the weekend. TIFF has dozens of special programs this year, including late night screenings with Midnight Madness, the continuation of the short film program Short Cuts Canada and Wavelengths, an avant grade series. Be sure to also check out blogTO's picks for the best of the festival. The festival closes September 16th.
Various locations, September 6-16, 2012, ticket prices may vary

3rd Annual Queen St. West Sidewalk Sale
As if the city couldn't get more hectic this weekend, Queen West will be drawing in crowds for the 3rd annual Queen St. West Sidewalk Sale. Stores will spill out on to the street filling their sidewalks with discounted goods and wares. Participating stores include Lomography Gallery Store, Fashion Crimes and Lavish & Squalor, with restaurants like BQM Burger participating by offering special patio deals. Organized by the Queen St. West BIA, the event runs until 7PM.
Queen Street West (between Osgoode Station and Bathurst Street), September 8, 2012, 11AM Free 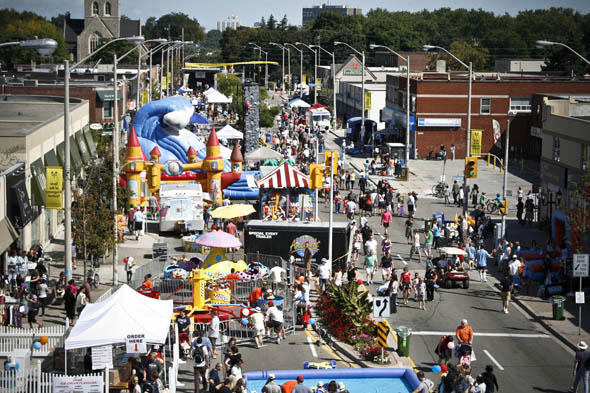 AwesTRUCK
After a steady street-food diet of hotdogs and fries, a diverse and gourmet food truck experience can be an overwhelming experience for a Torontonian. Fortunately, Food Truck Eats will make it a little easier to spot the gems, when they crown winners in their inaugural AwesTRUCK awards ceremony this weekend. The festival is a chance to sample the curb side cuisine that is popping up around the city, and get the scoop on the best food on wheels to follow before lunch-time Monday.
Evergreen Brickworks' Holcim Gallery (550 Bayview Avenue), Sunday, September 9, 2012, 2-8pm. General admission tickets are $15, and include entry after 4p.m.
VIP tickets are $60, include complimentary food between 2-4p.m., and entry after 2p.m.,

15th Annual Taste of the Kingsway Festival
If you didn't get your fill of deep fried food, carnies, rides and games at the CNE this summer, the Kingsway becomes a midway this Friday with the return of Taste of the Kingsway Festival. A culinary theatre will showcase cooking skills and how-tos in the centre of an outdoor market with performers, rides and games spread throughout the festival. Great Lakes Brewery will have beer and wine gardens set up along Bloor West for you to drown all the food available for tasting at the event. The festival opens this Friday and will see Bloor shut down between Prince Edward Drive and Montgomery Road until Sunday.
Bloor Street West (between Prince Edward Drive and Montgomery Road), September 7-9, 2012, Friday beginning at 6PM, Saturday and Sunday beginning at 11AM Free

28th Annual Vegetarian Food Festival
While it's no surprise that Toronto hosts the world's largest vegetarian food festival annually, you may be impressed to learn that the festival celebrates its 28th annual gathering this weekend. 120 restaurants and vendors specializing in vegetarian and purist vegetarian (re: vegan) foods will be serving innovative dishes that won't leave you asking for the beef. International cuisines will be served amidst the workshops, speakers, cooking demos, films and music that will be scattered throughout this free festival. The Vegetarian Food Fest runs until Sunday.
Harbourfront Centre (235 Queens Quay West), September 7-9, 2012, Friday beginning at 4PM, Saturday and Sunday beginning at 12PM Free

Riot Fest T.O.
Like it loud? Riot Fest T.O. will cause chaos at Fort York this Sunday, pumping out loud music from the best in punk, rock and indie underground music. The 8th annual music fest has a solid line-up this year: NOFX, The Descendants, Fucked Up and Andrew W.K. top the headliner list. This is the first year that the Chicago-born festival appears in Toronto so here's hoping it's a recurringg destination at this destination fest. Tickets are available through Ticketmaster or RiotFest.org.
Fort York National Historic Site (250 Fort York Boulevard), September 9, 2012, 12PM $39.50

Expocycle
The latest in bikes and biking gear will be available at the industry-focused Expocycle, where bike shop owners gather to buy up their stock for the following season. Open to the public this Saturday, Expocycle is a great opportunity to get ahead on purchasing bike gear for 2013 with over 800 brands and 2000 products on display. Tickets are free until September 7th, after which they are $35. For serious cyclers only.
Direct Energy Centre (100 Princes' Boulevard), September 8, 2012, 10AM $35

Cirque du Soleil's Amaluna
This is the first weekend of Cirque du Soleil's newest spectacle, Amaluna, in Toronto. With an almost Shakesperean narrative, Amaluna tells the story of a mythical island ruled by the cycles of the moon, on which Prospera, the queen, causes a storm which leads to a shipwrecked sailor falling in love with her daughter. Sound familiar? The stunning costumes, aerial feats, and acrobatic acts will ensure that this is a show like no other.
Under the Grand Chapiteau at the Port Lands (51 Commissioners St.), until November 4, 2012, various times, $58.50-$158.50 for adults