Labour Day weekend events 2012 in Toronto is our guide to events happening this Friday, Saturday and Sunday. Here's what's happening in Toronto this August 31-September 2, 2012.

Labour of Love
It's the weekend that house heads and trance freaks wait for all year--Labour of Love returns this Saturday with a line-up of the best DJs, trance and house musicians from around the world. This year's line-up includes strong acts like Manzone and Strong, Paul Van Dyk, Tinie Tempah and Markus Schulz, who play The Guvernment and Kool Haus on Saturday and Sunday. Advance tickets are available through Ink Tickets with prices reflecting entry for both days. This is a 19+ event.
The Guvernment (132 Queens Quay East), September 1-3, 2012, 10PM $110

INTERsection 2012
The intersection of Yonge and Dundas will transform into a music festival venue this Saturday for INTERsection, an all-day music marathon with performances by Toronto artists such as TorQ Percussionists and Bang On A Can All-Stars. The square will transform into a party that is part music festival, and part marketplace for artists to display their works. The 5th annual event boasts a 'musicircus,' where an eclectic mix of performers will gather on stage for a variety of acts inspired by avant-garde composer, writer and music theorist John Cage. Spend your Saturday at Dundas Square, if you dare brave the crowds.
Yonge and Dundas Square, September 1, 2012, 2PM Free

For more music listings, check out our weekly 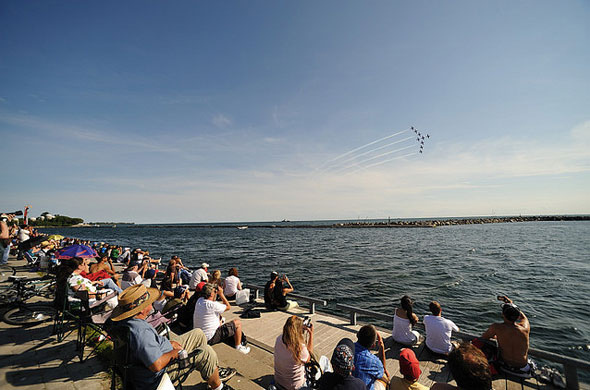 Canadian International Air Show
This one is going to be a noisy one: a summer tradition in Toronto returns with the CNE's annual International Air Show. This year, Canada will be widely represented amongst the jets flying above the Ex in the form of Snowbirds, CF-18 Hornets, T-33s and CP-140s. Jets take off around noon on Saturday and will do 4-hour shows through to Monday. (Be sure to check out the rehearsals on Friday, too.)
Canadian National Exhibition (100 Princes' Boulevard), September 1-3, 2012, 12:30PM Free

Really Really Free Market
Have some gently used goods and services that other people will actually want? Swing by Campbell Avenue Park and drop off your items by 5PM to give away to the folks at the Really Really Free Market, where everything is a free trade. Browse the items that other people have donated to the free market cause and stick around for a community BBQ and campfire after 5PM for just $7. At the end of the day, all unclaimed items will be donated to community organizations to help the less fortunate.
Campbell Avenue Park (Campbell Avenue and Antler Street), September 1, 2012, 10AM Free

10th Annual Toronto International Poetry Slam
The Great Hall will be filled with poets tonight for the 10th Annual Toronto International Poetry Slam, where 22 poets from Canada and the U.S. compete for a prize of $1000. Competitors will include names like Synonymous, Raissa Simone, Lip Balm and Jen Kunlire, all of whom will battle with spoken word. Returning champion Prufrock will defend his title against the poets, who will recite their own works. Tickets will be available at the door.
The Great Hall (1087 Queen Street West), September 2, 2012, 7PM $20

Transcendent
In a one-night-only engagement, The Royal Cinema will be premiering Transcendent, the story of an 18-year-old girl confused about who she wants to be when she meets a mysterious boy with a strange past. Directed by Ray Xue and starring Swan Lewis and Jennifer Langen, the film is a dark coming-of-age story that finds a young woman forever changed by a new friendship. Tickets are available in advance by e-mailing restudies@live.com or by phone at 647-200-3947.
The Royal Cinema (608 College Street), August 31, 2012, 6:30PM $10

Bar Gilead
Drop in to the Gilead Cafe this evening between 5 and 8pm, and you can enjoy happy hour with tapas and cocktails as part of the Jamie Kennedy-owned spot's Bar Gilead series. Start your long weekend off right.
Gilead Cafe (4 Gilead Place), August 31, 2012, 5PM

For more food news and events, check our our This Week in Food post.

Lead photo from Labour of Love. Photo of the air show by makoto2007 in the blogTO Flickr pool