High-occupancy toll lanes will be coming to the GTA if the provincial Liberals can get their proposal through the legislature. Vehicles carrying two or more people will be allowed to use the lanes for free while solo drivers will be charged. It's calculated HOV lanes will bring in around $250 million each year in transit cash. One expert calls the lanes "training pants for road users" because they change the way people think about driving. Is this a good start?

Coun. Mark Grimes expensed drinks to his taxpayer funded-tab during a trip to Las Vegas last July. The Star found Grimes spent $2,318.81 during the five-day trip to research the Fremont Street Experience, a pedestrian mall he hopes to recreate at Exhibition Place. The tab was reported as $1,095 at the last executive committee meeting but did not include air fare. The omission was the result of an error by a staffer, according to the Exhibition Place chief executive.

A day after announcing a plan to save BIXI, coun. Kristyn Wong-Tam has more bright ideas to keep Toronto's cyclists safe. A member's motion due to be heard at the next council meeting proposes a provincial one-metre (three-foot) passing rule for cyclists. Wong-Tam says she was affected by the death of 38-year-old Jenna Morrison, who was pregnant with her second child when she was hit by a truck passing too close. Could this rule be properly enforced?

Jarvis and Gerrard is the heart attack capital of Toronto, according to researchers at the University of Toronto and St. Michael's Hospital. 11 people suffered cardiac arrest at the intersection in the last five years. Other "hot spots," identified as part of a study into the location of defibrillators, are Jarvis and Dundas, Jarvis and Adelaide, Danforth and Pape, Sherbourne and Queen, and Spadina and Dundas.

The heads of the 12 zodiac animals could find a home in the Nathan Phillips Square reflecting pool this summer. The bronze installation by Chinese artist Ai Weiwei called "Circle of Animals/Zodiac Heads" will stand in the shallow water from June 10 to October 27 to promote an exhibit at the AGO if a motion by coun. Kristyn Wong-Tam passes. Cool idea?

A near-miss at St. Clair station is highlighting the need for greater awareness about the gap between the train and platform. Four-year-old Ava Buckareff fell through the gap up to her torso for a few terrifying seconds on Wednesday evening. The situation went unnoticed by the driver and could have resulted in serious injury had she not been rescued sooner.

Toronto is home to a mean whistler. Jeffrey Amos came second in this year's International Whistling Competition after taking up the musical habit seriously last year. "Basically, I've always been a pretty good whistler," he told the Star.

The University line (St. George to Union) will be closed this Saturday as part of ongoing signal upgrades by the TTC. There will be shuttle buses between St. George and King stations the entire day. The line is expected to re-open Sunday. The Yonge line will remain operational. 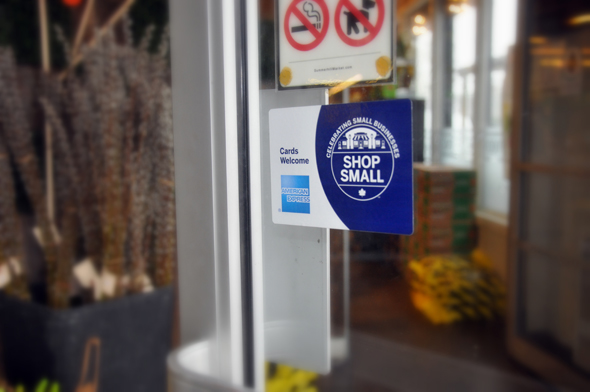 The top five Neighbourhood Gems have been announced in the American Express Canada Neighbourhood Gems Contest! Preloved, Butter Avenue, Florabunda, Fran's Restaurant and Mimi and Sheryl's Boutique have made the final cut. You can vote for them here once per day until midnight May 5th. Each vote earns you one entry for the chance to win a $50 American Express Gift Card. The contest is all part of celebrating the Shop Small program - a new movement focused on giving some thought to the importance of small, independent businesses and vibrancy and culture they bring to our neighbourhoods. That's definitely something we can get behind. #ShopSmall