Toronto police say they're re-thinking their Toronto marathon security despite there being no credible threat to the event. Chief Bill Blair said he'd spoken with his American counterparts and confirmed there is an "absence of an identifiable threat." Two bombs exploded near the finish of the Boston Marathon on Monday, killing three and wounding 170.

In case you missed it yesterday, Rob Ford's executive committee voted 9-4 in favour of sending the casino to city council. The cabinet-like group confirmed that all revenues from the development would go to transit but left the door open for a possible Port Lands site. The final decision will be made next month, but it doesn't look like the project has the votes to pass.

The city's BIXI bikes could be in financial trouble and even in danger of closing, according to a staff report and comments made yesterday. The Montreal-based parent company PBSC Urban Solutions has struggled to service a high debt load and keep cash flowing during cold winter months. Should the city subsidize BIXI like other transit?

The city has also narrowed its scope on transit taxes, choosing four sources of revenue capable of funding the next phase of transit expansion. A report to be considered by the executive committee next week says the combined force of a development charge hike, a fuel tax, a parking space charge, and a sales tax is capable of raising the $2 billion needed each year.

Police are investigating a suspicious package, possibly a mortar shell found between two apartment buildings on Ozark Crescent near Broadview and Danforth. The CBC is describing the object as an "artillery shell." So far the area hasn't been evacuated.

The long-neglected Guild Park, a home for pieces of long-lost Toronto buildings on the Scarborough Bluffs, has made some new pals who want to restore the site. The Friends of Guild Park want the city-owned property that's home to pieces of the Old Toronto Star Building and others to get new historical plaques and see re-open. The restaurant there closed in 2001.

The Delta Chelsea hotel between Yonge and Bay south of Gerrard is getting a new name starting 1 July. The 1,590-bed hotel, the largest in the city, will soon be known as the Eaton Chelsea. The name change is part of a rebrand by the parent company.

Finally, it's been a little while since we heard from the man upstairs (and by that I mean astronaut Cmdr. Chris Hadfield, Canada's representative aboard the International Space Station.) Last night everyone's highest Maple Leafs fan 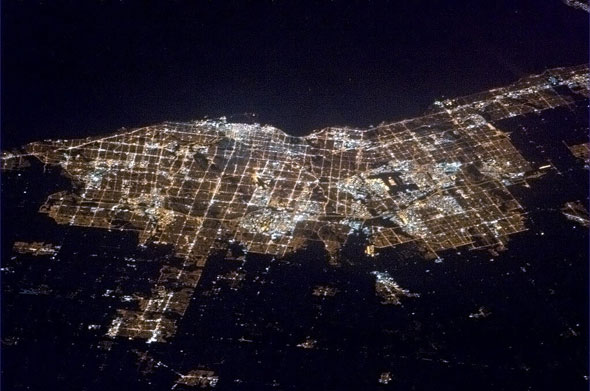 tweeted another aerial image of the city, an obsidian lake, and brightly-lit surrounding communities from orbit. Looking good, Toronto.IN BRIEF: