Rob Ford says he doesn't know what else he can do to curb gun violence in the city, admitting he's "frustrated" by the deaths of three 15-year-old boys in a month. The mayor said that while he and his brother regularly volunteer their time, speaking on the issue of youth gun violence at council would be unlikely to have an effect. However, Ford maintained he's open to suggestions. Could the city do more to tackle gun violence in Toronto?

Also at city hall, Ford says he's against adding more shelter beds despite a recent protest outside his office by members of the Ontario Coalition Against Poverty, a group demanding an emergency meeting on homeless care in the city. OCAP will hold a press conference at today's city council meeting and coun. Adam Vaughan says he'll table a motion on the shelter issue.

More question marks surround the future of Downsview Park, the former air base turned political red tape dispenser. The federally-owned, 231-hectare site was slated to become an sprawling urban park but a change of heart by Public Works and Government Services Canada signaled the site could be sold for development. Not so, the site's custodian tells the Toronto Star. A review of the site is due imminently.

Residents of a Yorkville condo driven out by an electrical room fire on Jan. 30 won't be able to return to their homes for at least another eight weeks. The owners of the property cite difficulties sourcing replacement parts for a damaged generator as the reason for the delay. Emergency funding from the city, which includes a daily $10 lunch voucher and two TTC tokens, has expired for many residents.

A bar in Little Italy played host to a final town hall meeting organized by former mayoral candidate George Smitherman on the topic of an MGM casino complex at Exhibition Place. Coun. Mike Layton spoke against building a major gaming facility anywhere in the city, saying there would be "deep social costs" to any development. Council will vote whether to allow a casino in April.

Finally, the world might be getting used to being in the lens of Commander Chris Hadfield, the Ontario-born astronaut currently aboard the International Space Station, but earlier this month the camera was facing the other way. One of Hadfield's friends, Andrew Yee, 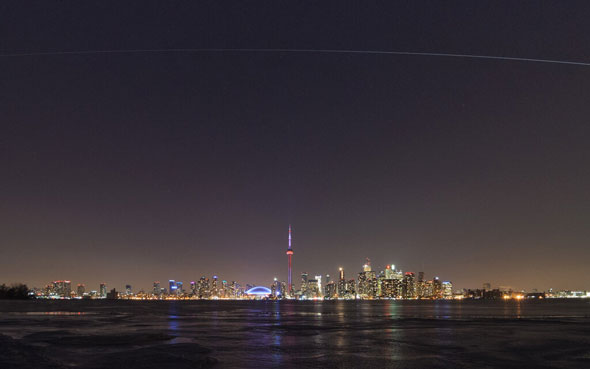 snapped this neat timelapse of the Toronto skyline as the ISS streaked above. Around the same time the astronaut took this picture of a gigantic sunset.IN BRIEF:

Image: "Day at the Beach" by DdotG/blogTO Flickr pool.