Despite almost canceling the event, Rob Ford attended the traditional city hall new year's levee where members of the public are allowed to rub shoulders with the mayor and members of council. Ford met a man who declared him "the greatest mayor Toronto has ever had" and received a panama hat from an Ecuadorian-born couple.

Toronto could be getting beer and wine in its supermarkets, or something close to it, if a new LCBO pilot project gets tested out in the city. As a counter proposal to the PC's plan to put beer in corner stores, the Liberal government has announced a scheme to put LCBO "express" counters in 10 stores on a trial basis. Customers will still have to pay a separate clerk but is this a step in the right direction for Ontario boozing?

With each new year comes the obligatory "first babies" news stories, and yesterday was no exception. This year's first boy was delivered at St. Michael's Hospital at exactly midnight to Jane Maggs, the partner of Casey Laforet, frontman of local indie band Elliott Brood. The first girl arrived out in Credit Valley Hospital in Mississauga at 12:07.

Journalist Michael Vaughan believes it's time to join other cities that have buried (or are burying) their downtown highways. Sinking the Gardiner and adding tolls, he argues, is the only viable option for the aging and crumbling concrete el. Is this the best way of fixing the problem - is it too early for us to contemplate removing the road entirely?

Climbing land values and new planning policies in Toronto seem to be having an impact on how the city preserves its heritage buildings, according to a piece by Raja Moussaoui in the Toronto Star. Developers are increasingly sweet to renovating important buildings in exchange for dense, high-rise towers on the same site (think the James Cooper Mansion on Sherbourne and the proposed Massey Tower condo.) Is this a good way of saving the city's past while encouraging development? 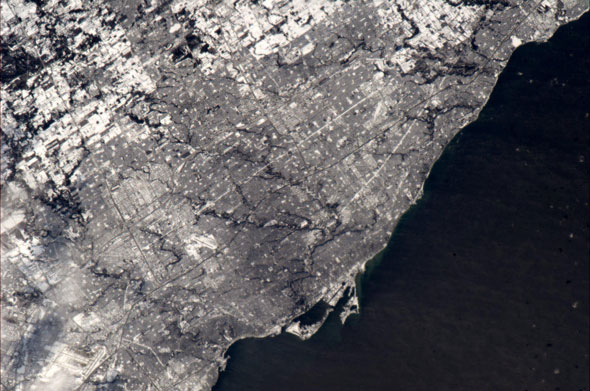 a picture of snowy GTA from 400 kilometres above the Earth's surface on Dec. 30. Uncleared hydro corridors, Downsview airport, and the city's sheltered ravine system stand out clearest on the monochromatic image. Lovely.IN BRIEF: