Several hundred Torontonians gathered at Christie Pits Park last night in solidarity against a spate of sexual assaults in the area. With greater numbers than originally anticipated, the group moved south to College Street and back to the park carrying signs of support and condemnation at the approximately 10 attacks being investigated by police. Similar crimes were reported near Kensington Market, but it's not clear if they are linked.

The Canadian International Air Show officially put this year's CNE to bed with its annual acrobatic spectacle in the skies over Toronto. In case you missed it, our Flickr pool is chock full of first-rate pictures of Snowbirds, CF-18 Hornets and all manner of swirling and twirling aircraft.

Here's an idea - if you're going to call someone a moron on television, it's always best to make sure you use a picture of the right person. In his classy "Moron of the Morning" segment, Sun Media reporter David Menzies mistakenly used a picture of award-winning comedian Lauren Ash instead of the Lauren Ash planning a gay pride event at Rob Ford's annual Ford Fest barbecue later this week. There's so much wrong with this story I can't fit it all in.

According to Atlantic Cities writer Nate Berg, residents of the hand-shaped state of Michigan regularly use an upheld palm to give directions and describe landmarks. Berg goes on to suggest several other U.S. areas shaped like hand positions or body parts that could use the same system. Personally, I think the GTA could be the back of a flattened right hand with the fingers pointing left, making the Toronto islands the thumb. Thoughts?

Toronto's oft-criticized heritage plans are up for discussion next Monday and the city wants your input. Up for discussion are beefed-up plans for protecting against "demolition by neglect" and other issues plaguing heritage preservation in the city. Read the full proposal here.

Finally, let's play another round of guess the intersection. Kudos to the person who correctly identifies these streets in the comment section. 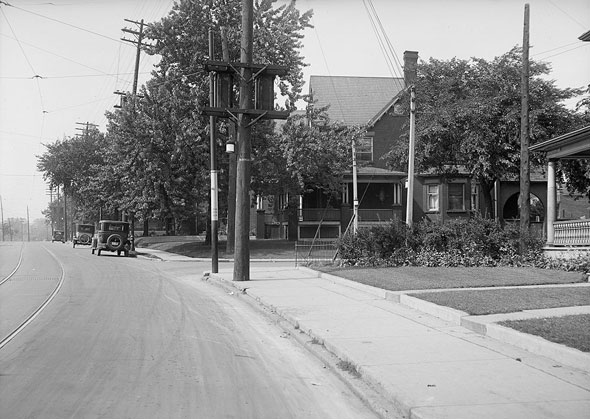