Suddenly, money! The city is now projecting a $115 million surplus for 2012 thanks to a lack of wage increases for union staff, more than 1,800 job vacancies, and savings from trimming the library budget, among other savings. The extra cash will automatically go towards next year's budget.

On his Sunday Newstalk 1010 radio show Rob Ford challenged local media to debate him on the issues and controversies surrounding his mayoralty. Edward Keenan, an editor and political commentator at The Grid, has answered the call in an open letter.

Roughly 1,265 shredded car tires are now attractively scattered around part of the Evergreen Brick Works as part of a new play and relaxation area. The contest-winning design by Humber College grads Gloria Perez and Jessica Gafic provides a zero-maintenance mulch and attractive landscape feature for the environmental community centre.

Did you know Toronto has a three-hour parking limit on city streets? No? Neither do most people, apparently. The restriction is rarely shown on signs, according to the National Post.

In sports, the Blue Jays say they are investigating why shortstop Yunel Escobar played a recent game in Boston with a homophobic insult written on his face. The words were written in white ink on top of the Cuban player's eye-black, a substance used to reduce the sun's glare. It's not clear what might have prompted the bizarre message.

In vintage grub, the University of Houston has an online display of menus from the mid 1800s. One, from the Royal Hotel in Hamilton, lists food for travelers heading by train to Toronto. The meat-heavy menu includes "calf's hearts" [sic] in a Madeira sauce, "pigs pittiestoes" with minced liver, and, perhaps most surprisingly, mac and cheese "a la Italian." The place sounds a little rough - a note reminds guests that management isn't responsible for "stolen money, jewels, or ornaments."

Finally, here's this week's mystery intersection. Do you know where this is? Write your answers in the comment section. 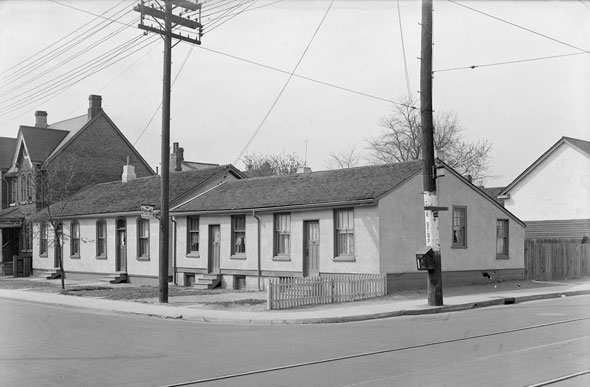 Photo: "King and University" by Ben Roffelsen in the blogTO Flickr pool and City of Toronto Archives.